Jainism, Buddhism, and Hinduism, three of the world’s most dynamic and ancient religions developed in India around the same time. Though each borrowed from, evolved because of, or came into conflict with each other: Hinduism, Buddhism, and Jainism are more than religions, but cross-sections of an entire culture and time period.

Jainism, Buddhism, and Hinduism have many a huge impact on eastern life as we know it. The interactions between humans and environment that these religions have had have been phenomenal.

Don't use plagiarized sources. Get your custom essay on
“ Jainism, Buddhism, and Hinduism ”
Get custom paper
NEW! smart matching with writer

Jainism being the oldest of the three has 12-18 million followers(jaindharmonline.com). Jain migrated from India to other countries beginning with them migrating to Britain and British colonies. In the beginning, a number of “Gujarati” Jains migrated to coastal towns of East Africa and later moved inland, particularly to Kenya, to open businesses. The Jain community in India represents an affluent and influential minority of the population.Jains now mostly reside in north-east Africa. Buddhism, on the other hand, is the sixth largest religion by population.

It has about 367 million followers and is7% of the worlds population(cia.gov).

Buddhism spread along land routes of the Silk Road, it underwent profound change. There were great overland trade routes in those days and in later centuries too, that joined China even to the Mediterranean. Along these routes Buddhism spread to northwest India and beyond, along the east-west Silk Route. Hinnduisms origin is much more shrouded though, in terms of its religious development there are now two basic theories that attempt to explain how Hinduism first developed within India, and they both draw on the famous “ekam sat viprah bahudah vandanti verse” for their effectiveness.

One suggests that at some time towards the end of the Indus Valley Civilization a group of nomadic people called the Aryans moved into northern India from the steppes of central Europe or even Asia Minor while the other theory suggests that Hinduism emerged out of India itself(Dasa).

The beliefs for these three religions are mostly the same in essence, they were all founded on the beliefs of peace and prosperity. They are also known as “The Paths of Enlightenment”. Hinduism ,though believed by many to be a polytheistic religion, the basis of Hinduism is the belief in the unity of everything. This totality is called Brahman. The purpose of life is to realize that we are part of God and by doing so we can leave this plane of existence and rejoin with God. This enlightenment can only be achieved by going through cycles of birth, life and death known as samsara. One’s progress towards enlightenment is measured by his karma.

This is the accumulation of all one’s good and bad deeds and this determines the person’s next reincarnation. Jainism has many similarities to Hinduism and Buddhism which developed in the same part of the world. They believe in karma and reincarnation as do Hindus, but they believe that enlightenment and liberation from this cycle can only be achieved through asceticism. In Buddhism, nirvana is freedom from the cycle of rebirth, when a being turns into a state of non-being, or Sunya, looses its identity and becomes nothing.

These religions were all derived out of India which used the caste system for their government. The buildings made for these religions were all complex and amazing in nature. Buddhists temples were mostly built in natural environments, such as forests and tops of hills. Hindu temples were built in more urban environments and used red paints for most of their buildings and temples. And Jain temples were also built in more urban places and used beige and gold paints for their buildings and temples.

These religions expanded in many different ways, they all originated in India, and started spreading throughout the world. The two that are most know today are Hinduism and Buddhism, Jainism still has about 16 million followers though. Buddhist temples were built along the Silk Road for prayer for the travelers. Hindu kept most of their temples inside of India unlike the Jainist that moved to northern Africa. It spread outside of Magadha starting in the Buddha’s lifetime, and with the reign of the Buddhist Mauryan Emperor Asoka, spread across Nepal straight down to China and all the way to Japan and became one of the dominant religions in these parts of Asia(Chung).Hinduism is a religion] of the Indian subcontinent of India, with 80.5% of the population identifying themselves as Hindus. The vast majority of Hindus in India belong to Vaishnavite and Shaivite denominations(Thompson Patts)

As part of the reaction against Hinduism during its early years, Buddhism rejected the caste system and other forms of social stratification and instead set up an essentially egalitarian society. There are only two religiously important social groups: the monks, who have dedicated their lives to full time pursuit of religious goals, and everyone else. The monks, as a group, are called the sangha(uwacadweb.uwyo.edu). When the Aryans moved into northwest India, they imposed a caste system to organize the new society created by their arrival.

The Hindus then put together a hierarchy of four varnas, which later was expanded to include a fifth category. The caste system, which the Hindus followed, initially served to maintain rigid social boundaries between the invaders and the previous inhabitants. By 80 A. D. the Jains were divided into two sects. The Svetambara or “white clad” live mainly in northern India today(Sprunger). They are more liberal in their interpretation of Mahavirals teaching regarding nudity and allow their monks to wear a white garment. Women are also allowed in their religion and monasteries accepting the possibility that they may find salvation(Sprunger). 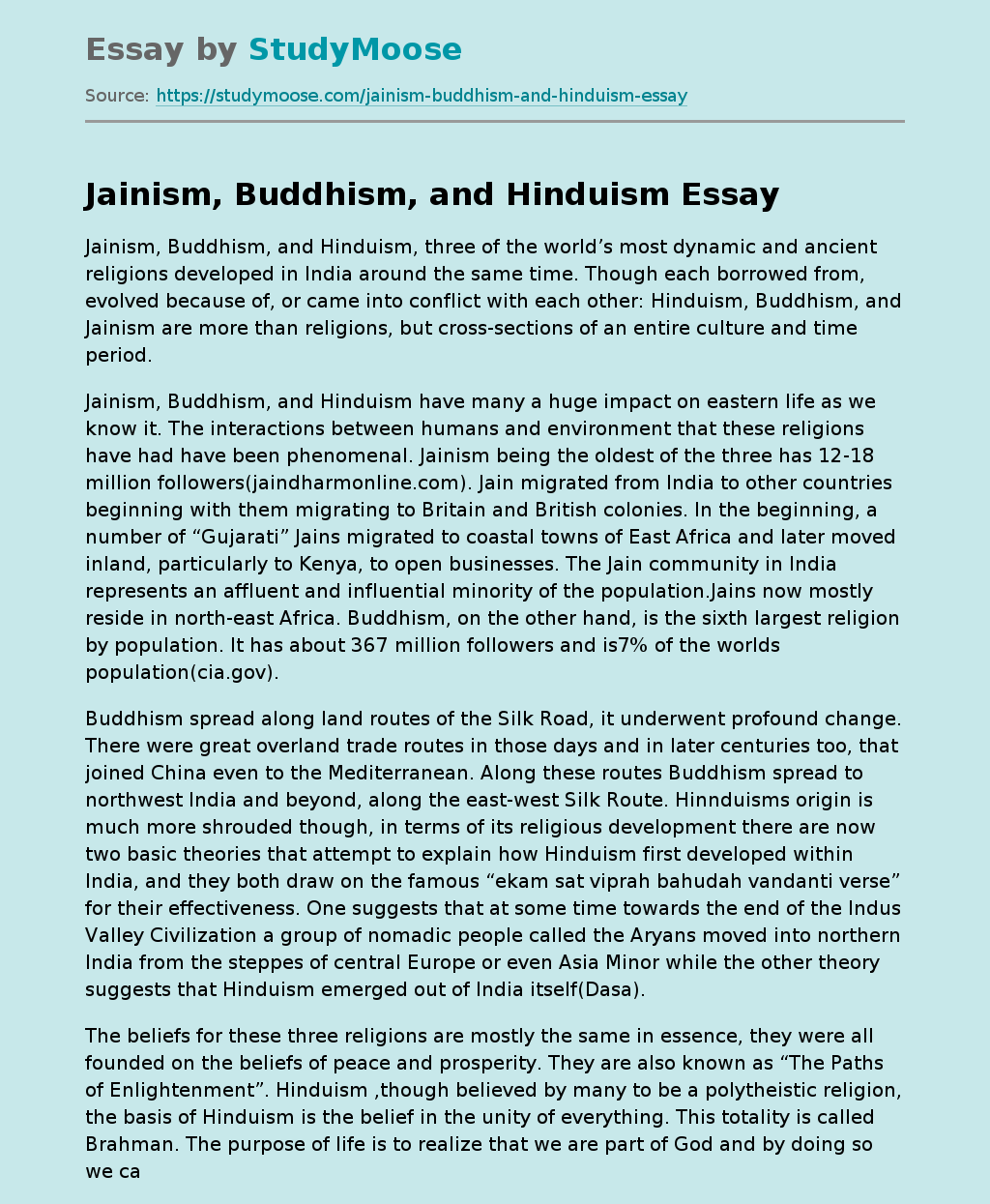