Stereotyping in Short Story Love is a Fallacy

People are naturally judgemental. On a daily basis, human nature allows people to pass judgements to other people ranging to the mundane opinions such as ugly hair and lousy clothes to the more serious issues of cultural differences and racism. This situation of judging other people hastily and putting them into certain categorizations is not new. After all, even the issue of racism itself which has been a worldwide issue has started since ancient civilization (Frederickson, 2002).

However, trivial judgements are not necessarily an issue of being racist—it can be a circumstance of stereotyping—something which people does, whether they like or not.

Stereotyping is the process of passing judgements to other people based on their physical ability or features, intellectual or mental capability (or lack thereof), attitude, speech, background, history and heritage. Stereotypes are not always true but they are true most of the time and are actually based on the culmination of perceptions passed to people based on the attitudes or features of those judged people.

These stereotypes are seen in abundance in literature and the output of the entertainment industry—sometimes even, it is the literary world and the entertainment industry who have created the stereotypes from the dumb blonde to the girl next door, nerdy geeks, jerk jocks, etc. , that each stereotype would have their own distinct characteristics. It is this stereotyping which is presented in Max Shulma’s short story, Love is a Fallacy that centres on an intellectual student teaching a potential girlfriend a course on reasoning and logic.

Interestingly, this potential girlfriend who is stereotyped as being dumb and yet beautiful emerges successfully as a logician and in an “in-your-face moment” with the student which proved how wrong stereotyping is—and how arrogantly stupid the intellectual student is. In the short story, the narrator (who is unnamed in the story but whose name is actually Dobs Gillis as presented in the book which the story belongs to), has a roommate, Petey who is in an ambiguous relationship with Polly, a potentially good candidate for the narrator’s wife.

Since the narrator, is a law student, he observes that all lawyers have beautiful wives beside them and Polly perfectly fits this category with her beauty and grace. But Polly is not that smart—which the narrator seeks to remedy as he teaches her how to think through talks on logic and reasoning; a course which started on lessons on fallacies. The way that the narrator describes his lessons with Polly can be describe in one word—excruciating—as he finds that her stupidity is over-bearing to the point that one’s knees grows weak with such absence of logical skills.

The narrator was desperate but was in despair, he was exasperated but wanted to expect something, in short, he had to do what he did because there was some hope in making Polly think. No matter how Polly may seem to be dumb in the beginning, she eventually managed to prove that she can have the ability to think—even if this was taught to her by an arrogant law student. In the beginning, the narrator’s exasperation to Polly’s inability to think at all was justified as Polly was the classic beautiful airhead.

Later on, Polly became more and more understanding of logic and reasoning that the narrator finally made Polly into who and what he wants her to be—a logician: Heartened by the knowledge that Polly was not altogether a cretin, I began a long, patient review of all I had told her. Over and over and over again I cited instances, pointed out flaws, kept hammering away without letup. It was like digging a tunnel. At first, everything was work, sweat, and darkness. I had no idea when I would reach the light, or even if I would. But I persisted. I pounded and clawed and scraped, and finally I was rewarded.

I saw a chink of light. And then the chink got bigger and the sun came pouring in and all was bright. (Shulman, 1961) And indeed, Polly becomes a logician that she even uses logic to reason out why the narrator is not worthy of her, even if he was the one who taught her how to think. Polly uses her new found knowledge to point out the fallacies in the narrator’s declaration of “love” and declare that he is not worthy of her because he has no raccoon coat—as simple as that. From the very beginning, it was clear that the narrator is arrogant as he declares his intelligence:

Cool was I and logical. Keen, calculating, perspicacious, acute and astute—I was all of these. My brain was as powerful as a dynamo, precise as a chemist’s scales, as penetrating as a scalpel. And—think of it! —I only eighteen. It is not often that one so young has such a giant intellect. (Shulman, 1961) This attitude of his can be the proof that he is one those people who likes to stereotype—and indeed this is what he does when he declares that his roommate, Petey is a good person but who is dumb and Polly is a beautiful girl but very, very dumb.

The way that he perceived, declared and narrated his judgements is a clear indication of the stereotypes that he has made. This attitude of the narrator can also be the very reason why Polly chose Petey over him—even if she gave the excuse of him not having a raccoon coat. From the beginning the narrator was arrogant and haughty and Polly may have seen this, after all, according to the narrator she cannot think but he did not acknowledge the possibility that she may be observant. Polly just had a different form of intellect which the narrator was not able to consider.

The raccoon coat that Polly used in justifying her choice may just be some trivial reason for the narrator to hear but actually, the coat means more than that—it is a symbol of how Polly is very different from the narrator that she considers things such as raccoon coats more important than actual intellect. Polly may not be bookish smart, but she is definitely wise—which negates the narrator’s entire stereotype of her.

Stereotyping in Short Story Love is a Fallacy. (2016, Sep 16). Retrieved from https://studymoose.com/stereotyping-in-short-story-love-is-a-fallacy-essay 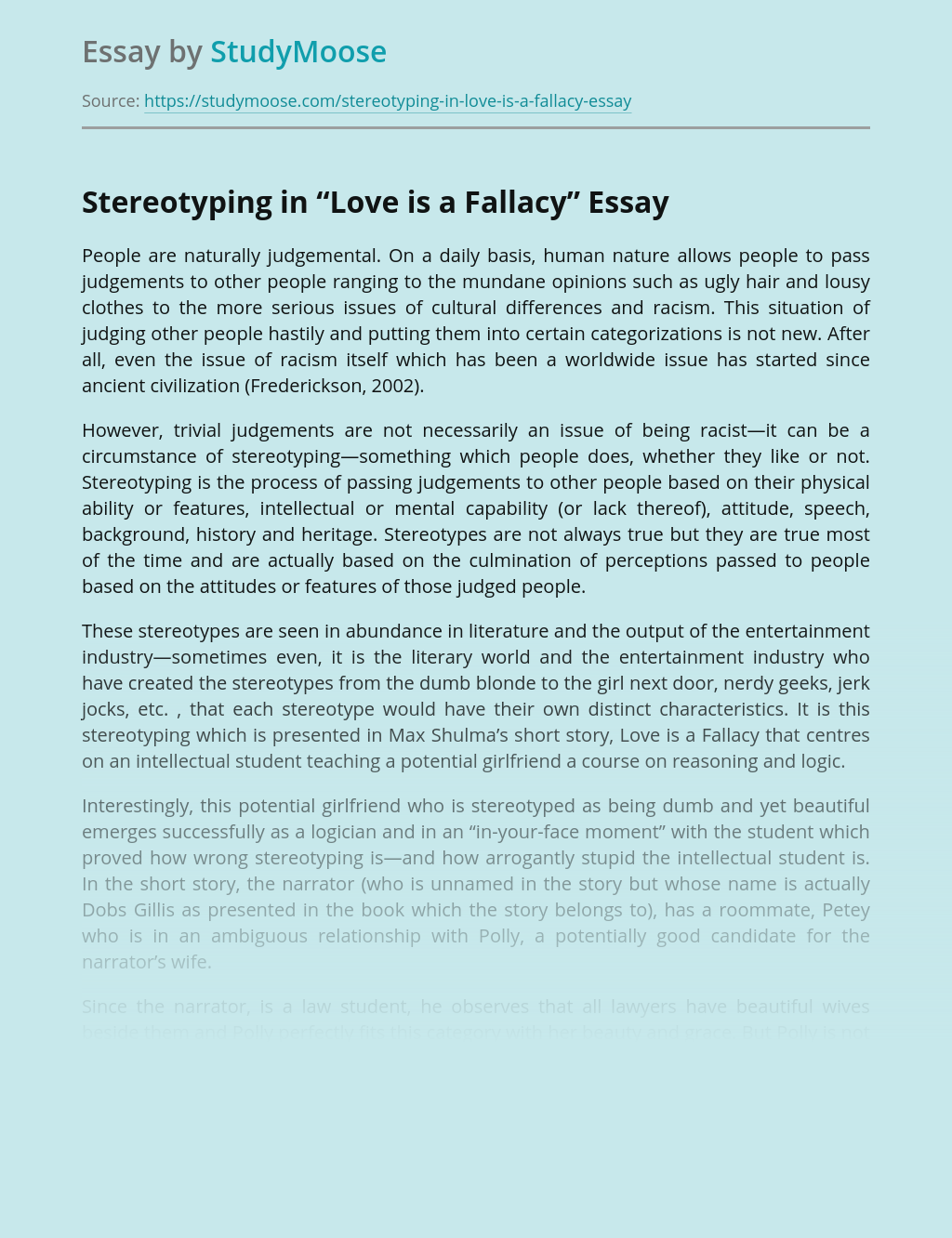 Frustrated Desire for Love and Relationship in Araby

“Araby”I watched my master’s face pass from amiability to sternness; he hoped I was not beginning to idle. I could not call my wandering thoughts together. I had hardly any patience with the serious work of life which, now that it stood between me and my desire, seemed to me child’s play, ugly monotonous child’s...

I question whether these two people in the story are having an affair, back together after a divorce, or whatever? Something as simple as bread can lead to that answer. The bread is much like their relationship, actually exactly like it. “We were hungry. We went into a Bakery on Grand Avenue and bought bread....

Get Essay
Interpersonal Relationship in Malamud's The First Seven Years

In William Shakespeare’s “Romeo and Juliet” the two main characters go to great lengths for love. The primary characters decline their parents strong displeasure for their relationship and continue to be with one another. Like Shakespeare’s “Romeo and Juliet” Feld, the main character, in Bernard Malamud’s “The First 7 Years”, disregards and later resents the...

Comparison of a Movie and a Short Story Secretary

“Secretary,” the motion picture, is a provocative and deformed love story. Viewers may go purple with rage or gray with disgust, while numerous may turn pink with humiliation in order to hide the red of stimulation. This motion picture crosses harmful mental territory: the limit between desire and discomfort, between surrender and subjugation. Gaitskill’s “Secretary”...

Striving for Justice in Killings by Andre Dubus

“Killings” by Andre Dubus is a brief story about a daddy who seeks out revenge for the murder of his twenty-one years of age son only to learn that vengeance will just make things worse. The father, Matt Fowler, is haunted by the disaster that has actually befallen his youngest son. Retribution is a typical...

In this essay, I take a look at the brief story, “Pleased Endings,” by Margaret Atwood and how the Canadian author dealt with the topic of love and the various methods it is represented in relationships and marriage, as well as analyzed composing styles as utilized in the story. For my conclusion, I will elaborate...

Jack London [John Griffith Chaney] was born January 12, 1876 and died November 22, 1916. His mother was of unmarried and of a wealthy background. Jack was brought up by an ex-slave in an infancy way, due to his mother’s illness. Jack London’s biography clearly shows that his early life was in poverty. He has...