Loneliness and Discrimination in "Of Mice and Men"

Many characters in the novella Of Mice and Men are marginalised and are deemed outcasts. One of the many ways marginalisation is presented in ‘Of Mice and Men’ is sexism. This is clearly represented in this novella through the character Curley’s wife and also about the way the men talk about women. Curley’s wife isn’t even named by John Steinbeck, so her identity is linked with her husband Curly. She is heavily discriminated and is treated as if she isn’t of any importance.

Don't use plagiarized sources. Get your custom essay on
“ Loneliness and Discrimination in “Of Mice and Men” ”
Get custom paper
NEW! smart matching with writer

The men in this novella have the impression that she is a “rattrap”. Curly had only been married to her for a couple of weeks when George and Lennie had arrived at the ranch, and in almost an instant they were warned from her and are told that she is “purty” and “, but she got the eye” which indicates that she has her eyes wondering on men. Curley’s wife is also described as a flirt or worse, resulting in the men showing her little to no respect.

She lives in the boss’s house and is the only woman on the ranch so she is lonely.

Curley’s attitude towards others when they talk to his wife makes them all want to stay away from her so they don’t get any trouble. At one point, George and Lennie’s first day at the bunkhouse, she came in looking for Curly and asked George where he was. After not finding Curly in the bunkhouse, she left and George tells Lennie to stay away from her, “Listen to me, you crazy bastard, “Don’t you even take a look at that bitch.

I don’t care what she says and what she does. I seen ‘em poison before, but I never seen no piece of jail bait worse than her. You leave her be.” The feminist literary theory can be seen through her eyes and she is called names and she has not earned her dream since in that time women were only needed to have kids and cook they weren’t able to pursue their dreams.

All Curley’s wife ever wanted was to be a famous actress and had met an actor who told her she could be a star but wasn’t allowed “he says he was gonna put me in the movies. Says I was a natural. Soon’s he got back he was gonna write to me about it.” thus forced to marry Curly to get somewhere, and ending up in a place that she never wanted which she puts is “a ranch full of guys”. By Steinbeck adding this, it emphasises the lives of women in this society as they had very little choice and most of them did end up somewhere they didn’t want. In the era of the Great Depression, the time this novella is set in, women were trapped in this stereotype that they should only be in one place, and this place was at home cooking, cleaning and looking after the children. Very little Women in that era worked because women were seen as weak, the men saw themselves as more powerful and important. When a woman had been told that because she had a pretty face this indicated she could easily attract a financially stable husband and have a safe future. When the Great Depression started the women could not do much in that time since the men were seen as more powerful and more capable of work.

Most of the women and children were left behind or forgotten, with the husbands going out to find work and leaving them to fend for themselves. Most situations the men couldn’t find any work near their family or in the same state so they would have to pack up and leave. Others are alone and once they take a loan from the bank and don’t have a steady pay flow/salary and can’t pay them back this then leads to the bank taking custody of the house. Section 2 Loneliness is a theme that was in the era of the novella Of Mice and Men and is still present to this day. Steinbeck clearly illustrates this theme through the eyes of Candy, Curley’s wife and Crooks. Loneliness by discrimination is an issue that continues to affect society today. In the era in which this novella is set in men usually travelled and worked alone either by their own choice or because they were faced with discrimination, but those who worked alone by choice still had a couple of guys that they would talk to.

Women in that time were isolated and the men that were of old age had a physical disability or had a dark skin colour were usually isolated and had no friends because they are being discriminated for physicals that they couldn’t control. The very fact that Crooks sleeps in a separate place than everyone else heavily reveals racial discrimination as he is literally insulated from the other ranch workers. The moment when racial discrimination is most shown is at the end of Chapter 4 when Curley’s wife confronts Crooks. Crooks tells curly’s wife she has no right to come into a coloured man’s room and then she bites back out of her anguish from being so alone all the time “Well, you keep your place then, Nigger. I could get you strung up on a tree so easy it ain’t even funny.” and by this point Crooks had just given up and retreated completely in fear because he knew very well she could in an instant. He is only one of the ways john Steinbeck expresses loneliness through this novella.

Candy was treated differently on the ranch because of the physical disabilities he had and his age, both issues that continue to afflict society today. With Candy, he only had one friend and this was his dog but from the pressure of the other guys in the bunkhouse they kill him off making Candy completely alone, Candy tells George and Lennie how he is going to get fired anytime now. The characters in this novella fought loneliness with Curley’s wife flirting around to not be alone and with Candy when he had his dog but after he was killed he was completely alone. In the present day, people are still being isolated because they experience discrimination and stigma for example, because of a disability or long-term health condition, or their gender, race or sexuality. In our society, we have social media and the internet which makes everything worse, if you have any type of imperfection or are not up to the “standards” you are excluded.

At school, if you have a certain disability or look a certain way you are excluded and are alone. Steinbeck’s novella doesn’t just project the theme loneliness for that time that it’s set in, it also relates to today’s society in many ways, if people from this day and age were to read this novella they would find a lot of similarities from back then and today. The lives of the men and woman in the time period this novella is set in are unfairly prejudiced, they are isolated because of things they could not control and were either born with or things that happened along the way and the exact same things that caused loneliness back then in the novella and reality happen in our present day’s society.

Loneliness and Discrimination in "Of Mice and Men". (2020, Sep 07). Retrieved from https://studymoose.com/loneliness-and-discrimination-in-of-mice-and-men-essay 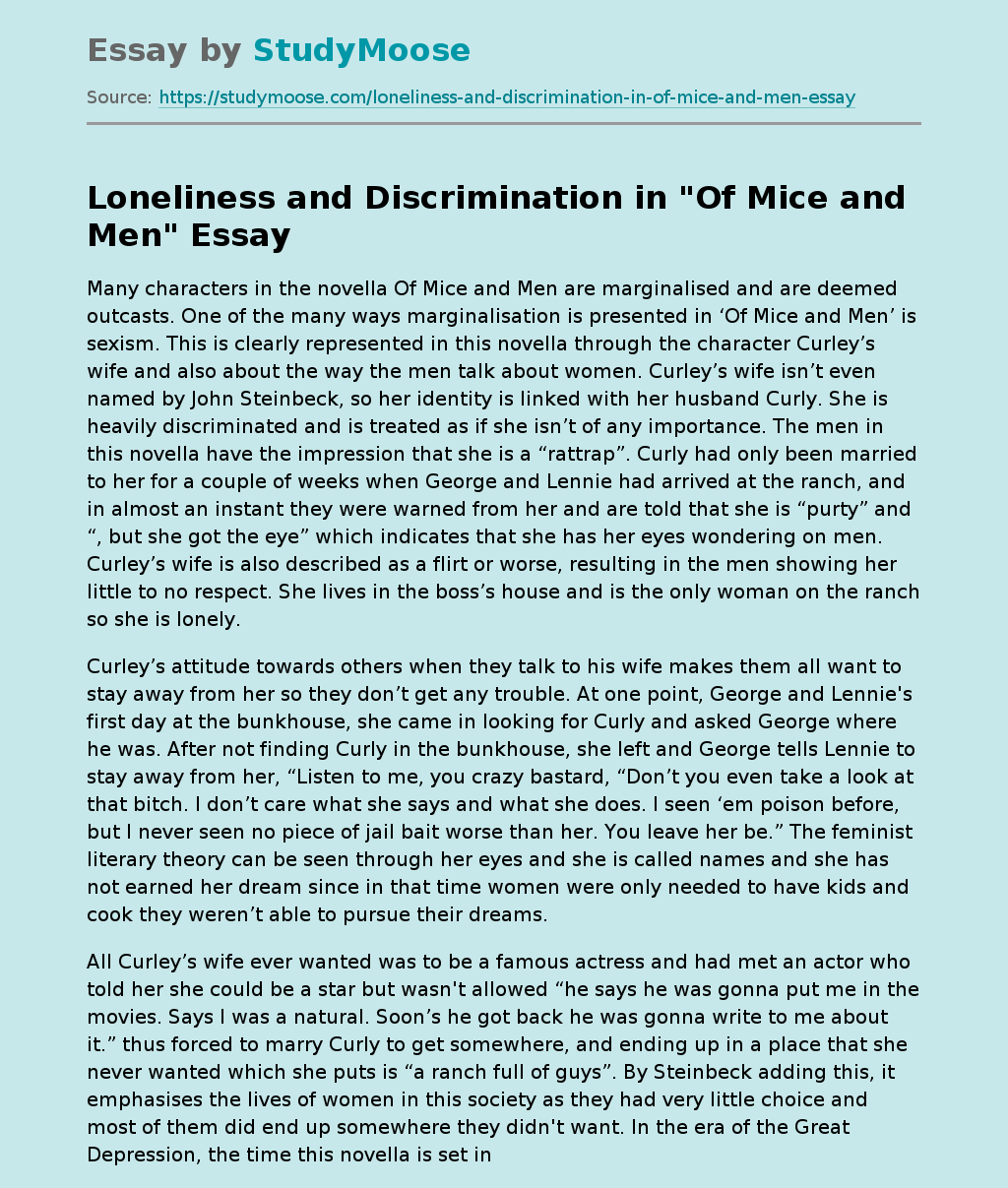