Compare the way Mary Shelly and John Steinbeck write about these human conditions.

In this essay I will discuss and compare the similar themes of loneliness, isolation and dependency in ‘of mice and men’ and ‘Frankenstein’.

Victor Frankenstein is the main protagonist character in the book ‘Frankenstein’. He is a scientist who challenges common science. He lives in a big family mansion in Geneva with all of his family. At first Frankenstein’s relationship with his family and friends is really close.

Don't use plagiarized sources. Get your custom essay on
“ Both ‘Frankenstein’ and ‘Of mice and men’ are concerned with the themes of loneliness and dependency ”
Get custom paper
NEW! smart matching with writer

When he moves to the university in Igolstadt he writes frequent letters to his family and Elizabeth.

Frankenstein has an obsession with a desire to create life. He gets this uncontrollable desire from the unfortunate loss of his mother during the birth of his brother William. Frankenstein studied professor Waldman’s research on darker science and when the professor died it gave him the final push towards creating life. Frankenstein thought he owed it to the professor to finish his research.

The research was time consuming this made his letters less frequent and shorter. Elizabeth felt isolated because of this and this made Frankenstein lonely as well.

Captain Walton is the first narrator of the book. We learn the story of Frankenstein’s monster through his letters to his sister. He is the captain of a ship on an expedition to the North Pole. His ambition is to reach the North Pole where no man has been before. He doesn’t have a good relationship with his fellow crewmates because he is selfish and reckless you know because in the book the crew threaten to mutiny if he doesn’t let them go back home.

Frankenstein and captain Walton have a link between them; they both have this deep imbedded urge to follow their ambitions without care of how reckless they are. I think this is the reason they connect so well and become close friends.

George is a young, migrant ranch worker who is reasonably small and has well-defined features. He is like a father to his mentally handicapped friend. He shares the dream of owning his own ranch with Lennie. George is a quite a quite lonely man because he hasn’t got a real future, can’t have any long term relationship because Lennie takes up mostly all his time. In the book George explain how he would be able to live easily without Lennie “God a’mighty, if I was alone I could live so easy. I could get a job an’ work, an no trouble. No mess at all, and when the end of the mouth come I could take my fifty bucks and go into town and get whatever I want”.

Lennie is a mentally challenged ranch worker. He is a big strong man who is impetuous. Lennie and George are a magnet, Lennie is the north pole and George is the south pole. They are completely opposite however they still attract each other and stay together. Lennie is childish and maybe mentally handicapped however he can still manipulate George. You see this in this quote just after George was complaining about Lennie stopping him doing what he wanted to do with his life. Lennie say “if you don’ want me I can go off in the hills an’ find a cave. I can go any time.”

And George relied by saying “No-look! I was jus’ foolin’, Lennie. ’cause I want you to stay with me.”. Lennie likes to pet soft things he gets in trouble because of this. Lennie is very lonely because he can’t do what the other men do due to him being mentally challenged and irrational. You can see he is lonely from what he does in this quote ” Ever’body went into town,” he said “Slim an’ George an’ ever’body. George say I gotta stay hear an’ not get in no trouble. I see your light.”. This shows that he is lonely and is searching for a friend because he has been left out. This also illustrates that Lennie is an outcast.

Crooks is a black busted back stable buck. He is called crooks due to having a crooked spine where a horse kicked him. Crooks is lonely and isolated from the rest of the workers, he has to sleep in his own place in the stables because he is black and in the time of the book there was a lot of racism and it was accepted that blacks were inferior to the whites. He is bitter and angry due to the way he is treated, it’s a defence mechanism to try and stop him from getting hurt however when Lennie is left alone and he goes in to Crooks room he doesn’t judge him by his ethnicity still Crooks acts bitter because he doesn’t trust that a white man can be his friend this parallels with Frankenstein. In Frankenstein the monster thinks a kid wouldn’t judge him however the kid does. Even though there are differences the theme of judgement are in both texts.

The monster in ‘Frankenstein’ is a man made from the severed body parts from dead criminals that Frankenstein put together and brought it to life. He has overwhelming strength and is impetuous. The monster is lonely because he is incredible hideous, repulsive and horrifying which cause people to panic and run away from him. The monster just wants to be loved and have a friend he can talk to; he doesn’t care who it is. In the book he lived in the woods for a while and noticed a family called the De Lacys who where struggling to survive during the winter. He became friends with them and helped the by doing hard manual work. Over time the monster saw what the de Lacy’s had and he fell in love with one of the de Lacys. When he told her his intensions she panic and gave him a look of disgust. Then the monster was mad with anger so he burnt them alive.

Curley’s wife is very lonely, bored and frustrated. She lives on a ranch where there no other women and during the day all the men go to work so she is left on her own being bored because she has no one to talk to. This is shown in this quote “Think I don’t like to talk to somebody ever’ once in a while? Think I like to stick in that house alla time?”. She is also frustrated that her life turned out this way. She married a violent man who she didn’t love. She imagined her life to be full of glamour, fame and stardom. In the book Lennie and Curley’s are in the barn. Curley’s wife is flirting with Lennie. Lennie starts stroking her hair softly then he got harder and harder until Curley’s wife screams. Lennie panics, covers her mouth and shakes until she was dead. A similar thing happens in the book Frankenstein, the monster tries to be friends with William however William panics and the monster accidentally kills him.

The structure and style of both texts are very different. Mary shelly told the story of Frankenstein through letters that captain Walton wrote to his sister and at the end of the book we hear the monster’s side to the story. The style of Frankenstein is gothic horror. It is dark, gory and intense. Steinbeck’s is written in a more traditional structure in the third person. It is an emotional drama. Steinbeck uses description of scenery and animals to build characters however Mary shelly focuses on developing characters.

In conclusion I believe that both books illustrate loneliness and dependency very well however I prefer the story of Frankenstein more than Of mice and men because Frankenstein is more surreal and is gory which I like. Of mice and men is realistic and quite boring. I think the fact that they are very different types of books that were written at very different times and still have the same themes is quite interesting.

Both 'Frankenstein' and 'Of mice and men' are concerned with the themes of loneliness and dependency. (2017, Oct 26). Retrieved from https://studymoose.com/both-frankenstein-and-of-mice-and-men-are-concerned-with-the-themes-of-loneliness-and-dependency-essay 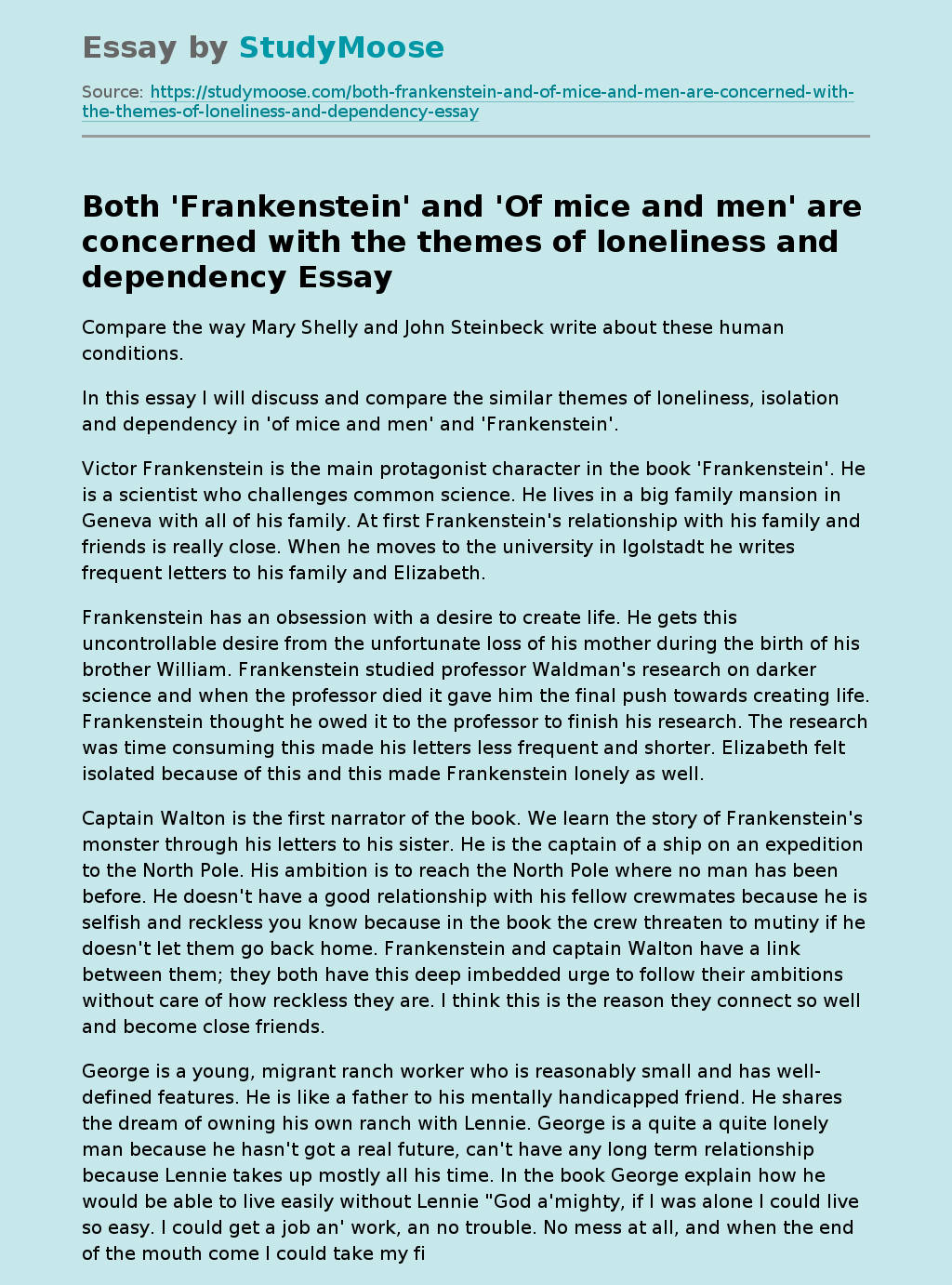