When all of the ranch hands went into town, Lennie, Crooks, Candy, and Curley’s wife were left behind. This was due to discrimination and prejudice. While the ranch hands were in town, the true similarities among the others really come out. One can see that they are left out and secluded due the fact that each one of them has either a physical or mental disability, or are considered trouble.

In John Steinbeck’s novel, Lennie Small is a mentally handicapped man who traveled with George Milton.

Don't use plagiarized sources. Get your custom essay on
“ John Steinbeck “Of Mice and Men” Character Analysis ”
Get custom paper
NEW! smart matching with writer

George had to speak for Lennie and do a lot of babysitting and thinking for him also. Crooks, the Negro stablebuck, had been injured when a horse kicked him. He had a hard time walking around because his back was hunched over and was very sore. With being a “nigger”, the boss had a room just for him in the barn. Candy, the swamper, is an old man who had his hand injured in an accident on the ranch, making him partially handicapped.

This quote shows how Candy has become useless like his dog “the best damn sheep-dog I ever seen”.

Curley’s wife is a young, flirty lady who is ignored by many of the ranchers because if they talk to her, they would get into trouble with Curley. Over the course of the novel, there is a lot of sexual prejudice towards Curley’s Wife. With the fact that she lived on a ranch where the majority of people were men, she tended to get very lonely.

When all things are considered, Lennie, Crooks, Candy, and Curley’s wife are all left out due to a disability or for being a possible wick to start a fire. Lennie has a mental disability that slows him down some on his thinking process. Nobody wanted Lennie to go into town because he might do something stupid. Crooks and Candy both have a physical disability. With their disabilities, the other ranchers see them as useless because Candy has no hand, and Crooks has a hunched back. The ranchers also exclude Crooks because he is a “nigger” and at that time period, “niggers” were still considered to be trash, even though slavery had been abolished. Curley’s wife is left out because of the fact that she is very flirty and if she was to come along, Curley would be very irate.

Crooks, Candy, and Curley’s wife all suffer from discrimination and prejudice which creates loneliness and isolation for each one of them. They learn to deal with their loneliness by admiring Lennie and George’s friendship. Crooks experiences isolation due to the fact that the society he resided in was racist. “A guy goes nuts if he ain’t got nobody. Don’t matter no difference who the guy is, longs he you. I tell ya a guy gets too lonely an he gets sick” was the way Crooks found a personal connection with Lennie by letting him know he understands how he feels when George is gone. Another quote “Cause I’m black, they play cards in there but I can’t play because I’m black. They say I stink. Well I tell you, all of you stink to me” shows that Crooks would do anything to be accepted, but because of his color he has to refrain from the urge.

Throughout the story, there is a lot of discrimination and prejudice. Lennie, Crooks, Candy, and Curley’s wife all deal with getting left out while living their lives. Their similarities really show when they aren’t able to go places and are excluded. At times when they were excluded, they came to one another to cope with their loneliness. Each one of them wanted someone to care about them, to own their own place, and to belong somewhere. 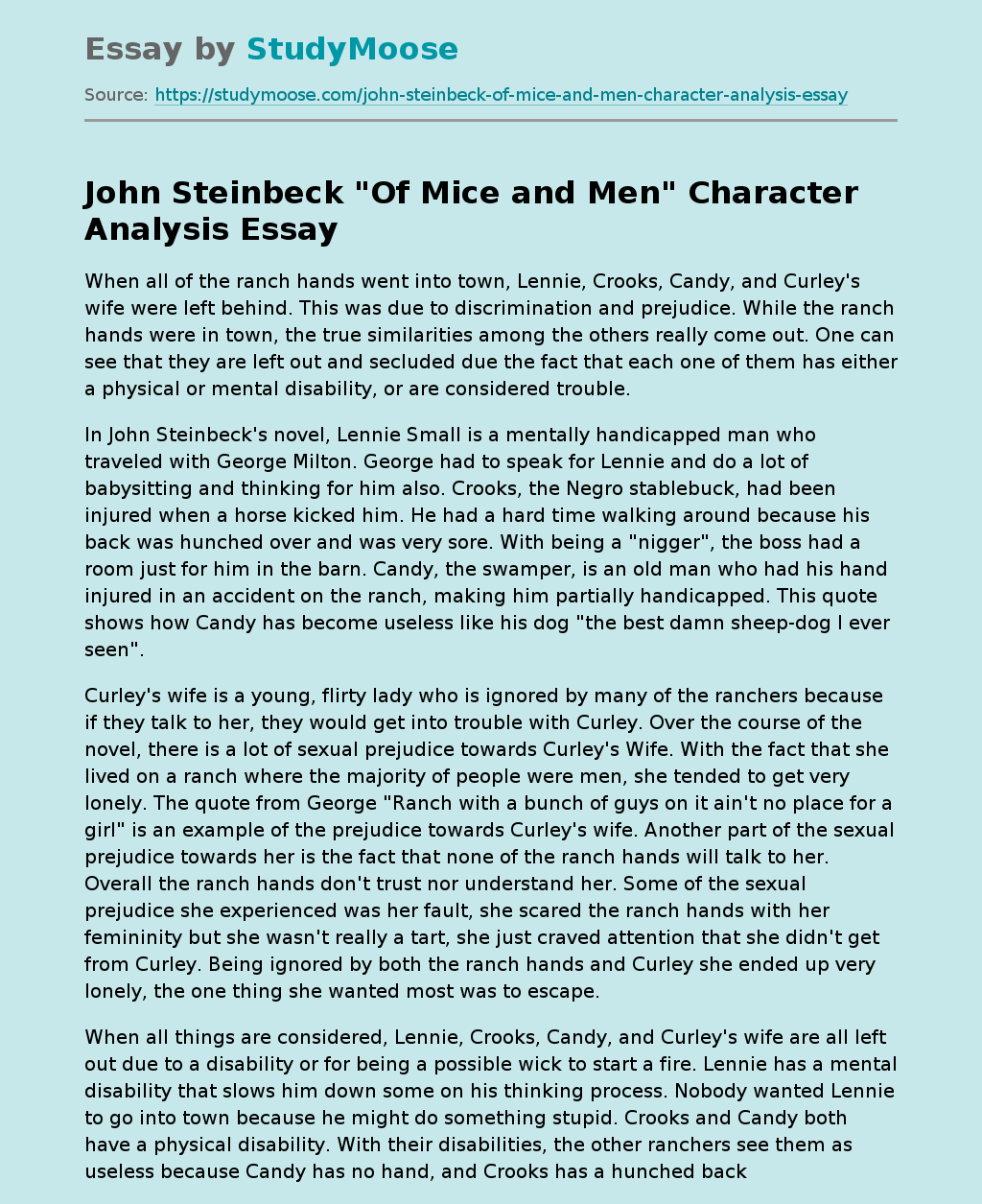