Being a girl of a mixed ethnic background, you can imagine the diversity of language used across my family. The dialects and accents have a wide variety as my family are spread all across the globe. My mother carol is British born and bred in the Essex country side. Whereas my father ahmed is, half Lebanese and half Palestinian. My mum’s first language is English and she speaks in standard English, this could be because of her profession as a nurse has an influence on her speech and it wouldn’t be professional of her to constantly use colloquial language.

Turn in your highest-quality paper
Get a qualified writer to help you with
“ Language Autobiography ”
Get high-quality paper
NEW! AI matching with writer

My father’s first language is Arabic, the Palestinian dialect Arabic.

There are so many dialects of Arabic sometimes it seems like it’s a completely different language! He can also speak French as fluent as he can Arabic because French is also a main language in Lebanon. he is also fluent in English, but he has an Arab accent.

My father lives in Lebanon so his dialect of Arabic has changed to the Lebanese dialect because of his surroundings but he still has a twang of the Palestinian dialect. The main languages in my family are English and Arabic, but there are so many dialects, such as Egyptian, Jordanian, Emirati, Lebanese, Moroccan, Saudi Arabian, Syrian Arabic and Essex accents, Dorset accent, Scottish accent, American accent, Australian accent. This is just the start of the variety of language in my family!

So you’re probably thinking, what is my first language? Well, I was born in the United Arab Emirates in the Emirate of Dubai.

Yes, I think it too… why did I immigrate to sunny England? Growing up in Dubai my first language was English because my mother’s Arabic was very basic; however I was fluent in Arabic and could also speak some Tagalog as I was brought up with a Pilipino nanny, Lily. I immigrated to England when I was about 4 or 5 years old, I was constantly speaking English. I remember some of my mum’s friends telling me I had a slight American accent. But my accent quickly changed because of influences around me in school. My surname is Said, but it’s pronounced “Syed” and I remember reading the Biff and Chip books in my first school and saying “and Chip Syed this”. My teacher found it highly amusing!

Ever since I moved to England, over the years I slowly forgot how to speak Arabic as I got out of the habit of speaking in Arabic often. Now I only know greetings and little phrases in Arabic. Trying to learn Arabic again was extremely difficult because I’m so used to the rules in the English language such as the “Ough” sound. Being so used to certain rules really affects trying to learn a new language, especially Arabic. Learning Arabic was very different to English and the Arabic alphabet has more letters than the English alphabet, which include sounds as well as letters. Also not every word in Arabic can be translated perfectly into English, and there is no word in the English language for it. Sometimes it’s hard to get a near enough definition of the word without meaning something else.

Also in Arabic they can have one word which in the English language translates to a group of words or a sentence. From my experiencing of learning Arabic again I have noticed that the language is very cultural and influence by religion, for example a lot of words or phrases refer to god (Allah). However not just Muslims and religious people use these words, these words are used by all Arabic speakers. In the Spanish language I realized a difference in tenses. In English there are only three tenses, present, past and the future. Whereas in the Spanish language there are many more. This makes its complicated and more difficult to learn as realistically there is only 3 tenses, and it’s hard to picture other tenses.

I would describe my accent as a southern English accent. My cousins who live in Essex say that I have a “brightonian” accent, is there such thing? According to my cousins, people from Brighton raise their tone at the end of every sentence like they are constantly asking questions. I can’t notice myself doing it or other people doing it around me. The way I talk changes depending on the context. For example, when I’m with my friends I use a large amount of colloquial language.

Whereas when I’m with my mum or teachers I would not use this language, I would talk in a more Standard English way. Having a lot of friends from an ethnic community, I’ve learnt a lot of slang and colloquial words. Even though these friends are from an Arabic background, I would never talk to my family in the Middle East in this way. I think I change the way I speak to different people, depending on who it is to make a good impression and to make my language appropriate to the situation. The different use of language always comes back to the context its used in. 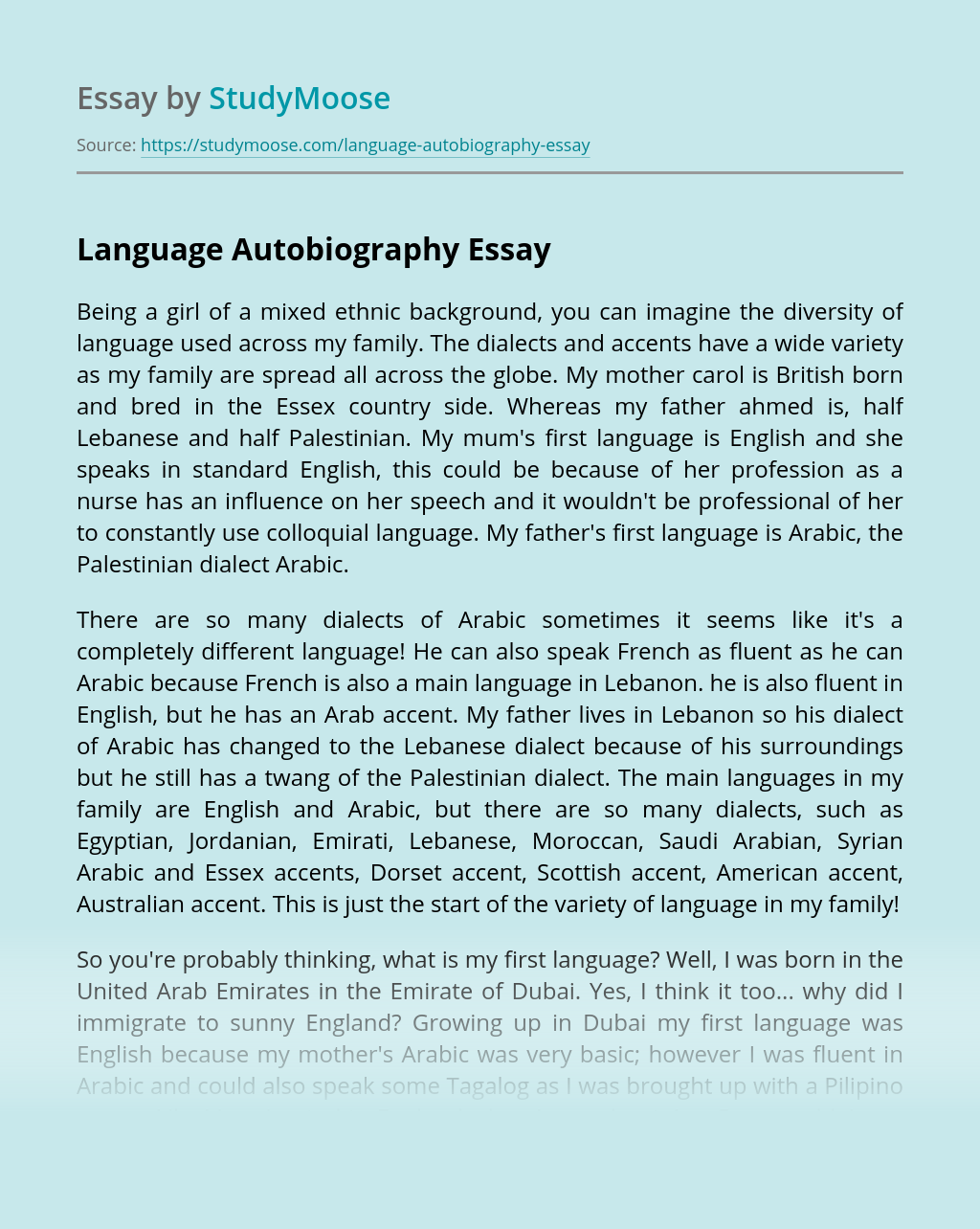 Turn in your highest-quality paper
Get a qualified writer to help you with
“ Language Autobiography ”
Get high-quality paper
Helping students since 2015
Stay Safe, Stay Original