Language diversity is an important topic for all South Africans to consider since we have 11 official languages. This means that we are challenged when it comes to being able to communicate with one another. This challenge presents itself in various forms, from the workplace to people’s daily lives and personal outlooks surrounding different cultures. Language diversity also influences important issues such as education, Government and adoption.

Turn in your highest-quality paper
Get a qualified writer to help you with
“ Essay on Language Diversity ”
Get high-quality paper
NEW! AI matching with writers

If a family decides to adopt a child from another language, they are essentially uprooting the child from its heritage. If the child is only a baby when it’s adopted, it should be able to integrate into its new family with relative ease, because culture is learned and not inherited. However, if the child is a bit older and has lived some of his/her formative years in his/her original language and culture, the adoptive parents run the risk of not being able to fully understand their child, its unique cultural/ethnic needs/beliefs and/or methods of communication.

Families who adopt toddlers, children and/or teenagers from different cultural and language backgrounds will only be able to cope with the unique parental challenges they will face through undertaking to learn about the community their child is from. Although it is important for such parents to integrate their adoptive children into their own cultural practices, so that the child feels truly part of the new family, it is also important that the child’s traditional beliefs and practices are understood by the parents, and where required, integrated into the family.

One of the ways in which the adoptive parents may need to integrate the child’s heritage into their family is through learning and using more than one language in the home. If the child’s adoptive parents do not speak the child’s mother tongue, this may leave the child feeling alienated, and could lead to communication issues that could break down family bonds. Conversely, if the child is not taught the language of its adoptive parents, the parents may feel a separation from the child, and that the child is not truly ‘one of them’, which would be very damaging for both the parents and the child. It is therefore important that the mother tongue of all family members is accepted in the home, and that a multilingual family culture is embraced and cultivated.

If families with adopted members learn to understand, accept and embrace one another’s differences, they will be brought together and they will be able to bond on the basis of their shared humanity, rather than feel divided on the basis of their differing cultural practices. An aspect of such an embrace could manifest in the form of learning one another’s languages to break down any communication barriers that may otherwise exist. This process is a very positive one for South Africans because we live in such a culturally and linguistically diverse country.

Aside from adoption, language diversity is also an important consideration in relation to Government, education, and interpersonal relationships in South Africa. When individuals communicate in general, it is important that they bear in mind the ‘cooperative principles’ of language usage. This means that both the speaker and the listener needs to be aware of possible ambiguity in sentences, and the speaker needs to be succinct and able to express himself or herself clearly.

In the case of education, students who are learning in a language that is not their mother tongue may struggle to be perspicuous and this may obstruct their ability to be understood by their tutors. These students may also struggle to understand what their tutors are communicating to them, and may therefore be unable to interpret complex tasks correctly. Awareness of language diversity – and the barriers it can create – is therefore highly important in education as language, aside from intelligence, could be a deciding factor in a student’s ability to pass a course.

Similar concerns also apply to the Government – who hold the burden to communicate with the entire, linguistically diverse nation competently and effectively. Government officials, and the President, must therefore be certain that their speeches are translated accurately in all languages, as well as all legislation and legal proceedings. If certain laws passed are misunderstood, it could result in civil unrest. During legal proceedings, misunderstanding could even result unfair prosecution.

On an interpersonal level, and in the work place, language diversity can be threatening and can create divides among individuals. Although people in the workplace are regularly exposed to other cultures and therefore don’t feel as threatened by them, language barriers could still prevent people from working cohesively. People who are not upper-income earners, and therefore not often exposed to other culture, may perceive the differences among cultures threating, which could in turn hinder their ability to work together in future.

In conclusion I think that language diversity is an inextricable part of South African life, and it should be understood and respected by everyone. Citizens of the country should put active effort into learning how to communicate across language and cultural divides. Language diversity should not be seen as a force pushing the different cultures apart, but rather as a challenge that can be mastered in order to foster educational outcomes, political peace and work projects as well as a tool that will bring together families and friendships of all backgrounds. 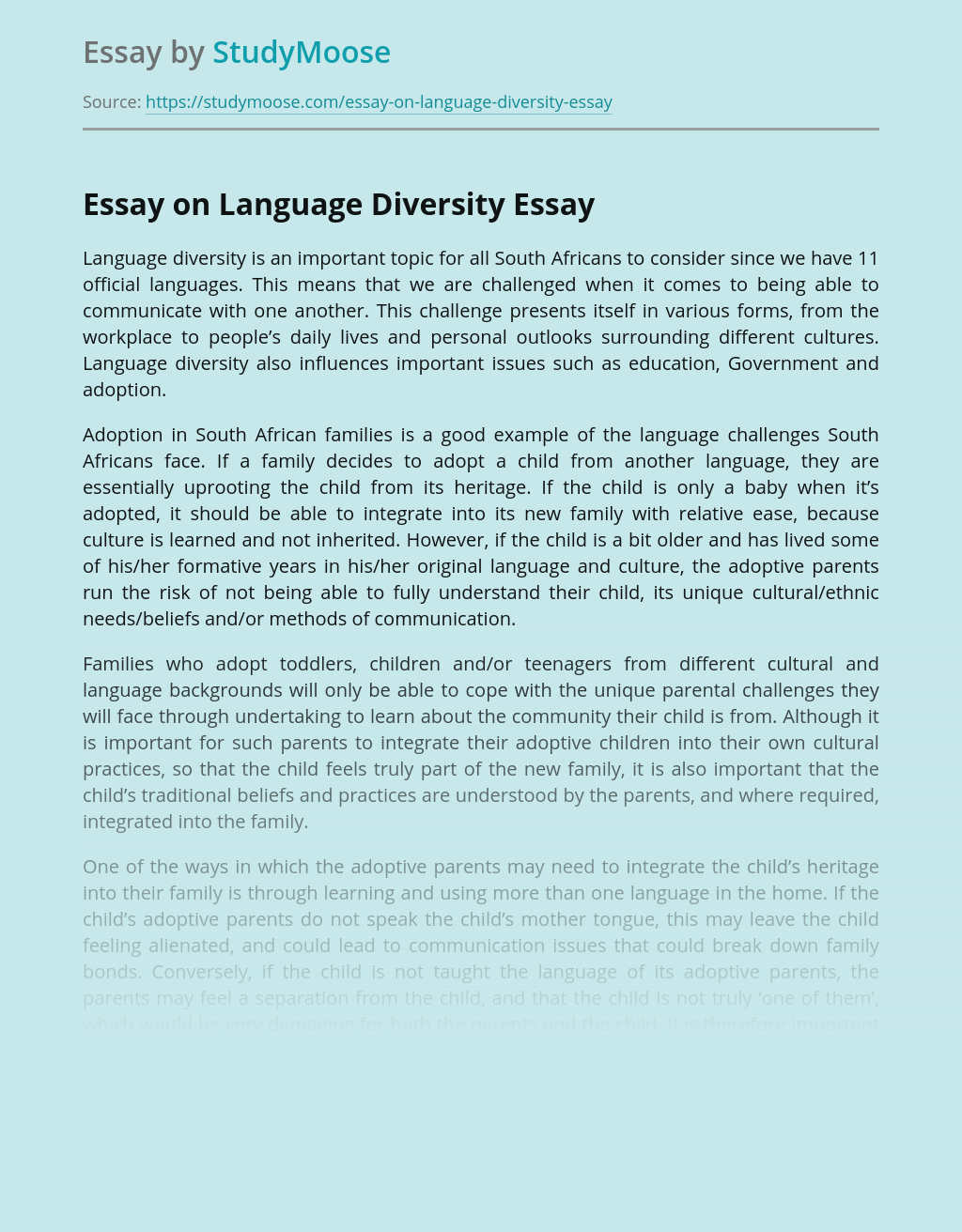 Turn in your highest-quality paper
Get a qualified writer to help you with
“ Essay on Language Diversity ”
Get high-quality paper
Helping students since 2015
Stay Safe, Stay Original