Labor unions, labor relations and their impact on organizations in the United States

This essay attempts to define labor unions and labor relations and critically analyzes their impact on organization. It also analyzes the impact of changes, different employee aspects ranging from relation strategies, policies and practices on organizational performance. Aspects like campaign, elections, contract negations, strikes etc will be dealt with too in this context. Labor relations refer to the relationships between management and working force (mainly through labor unions). It touches on all aspects relating to employment terms, dealings and conditions.

The ability of these labor relations to adapt to changes in technology, globalization and political environment is very important.

Don't use plagiarized sources. Get your custom essay on
“ Labor unions, labor relations and their impact on organizations in the United States ”
Get custom paper
NEW! smart matching with writer

Labor unions refer to a group of workers within an organization aimed at fighting for the interest of its members, mainly the improvement of wages and working conditions. Labor unions are governed by and for members who have come together for a common purpose. The purpose of the unions is to bargain for members with their employers for the welfare of the workers.

The main aim of the American labor unions was different from those in Europe. In the United States trade unions are typically local organization with the aim of protecting and advancing the economic welfare of its members. They typically have statewide and national connections but have no political connections (Whitney 2008). Importance of labor unions and labor relations in the work place During the 19th century, salaries and working hours were directly negotiated by the employer and individual workers.

This was due to fact that the social-economic and legal environment did not favor development of unions by workers. This led to many abuses of employees by their employers; hence the workers resorted to creation of unions to fight for rights and they did this through organized strikes. In order for the harmony in industries, three regulations were put in place and they included: collective agreements, labor relations and protective legislation. The purpose of protective legislation was to set maximum work hours, minimum wages for female workers and minors and later for mature male employees (Hunt and Patricia 1994).

Various legislations to prevent discrimination in employment, membership in workers orgsnisations, and elimination of limitations based on race, gender etc. There is the right of free association in workers unions, formation of bargaining units and use of unions as the only route for bargaining and eliminates oppressive practices by employers provided for in both the state and federal relations. Labor relations allow employee unions and employers to negotiate with each but unlike the protective legislation it does not set terms and conditions.

Presently, most employers have departments for labor relations that solve problems of negotiations and the supervision of agreements. These departments are normally divided into two sections; one dealing with daily issues regarding wages and salaries while the other one deal with promotions, discipline and arbitrations. In the recent past, unions have evolved to resolve a variety of workplace issues; for example minorities, lesbian and gay employees and even women. Unions act as voices for these classes of employees through collective bargaining (Hunt and Patricia 1994).

Labor unions, labor relations and their impact on organizations in the United States. (2020, Jun 02). Retrieved from https://studymoose.com/labor-unions-labor-relations-and-their-impact-on-organizations-in-the-united-states-new-essay 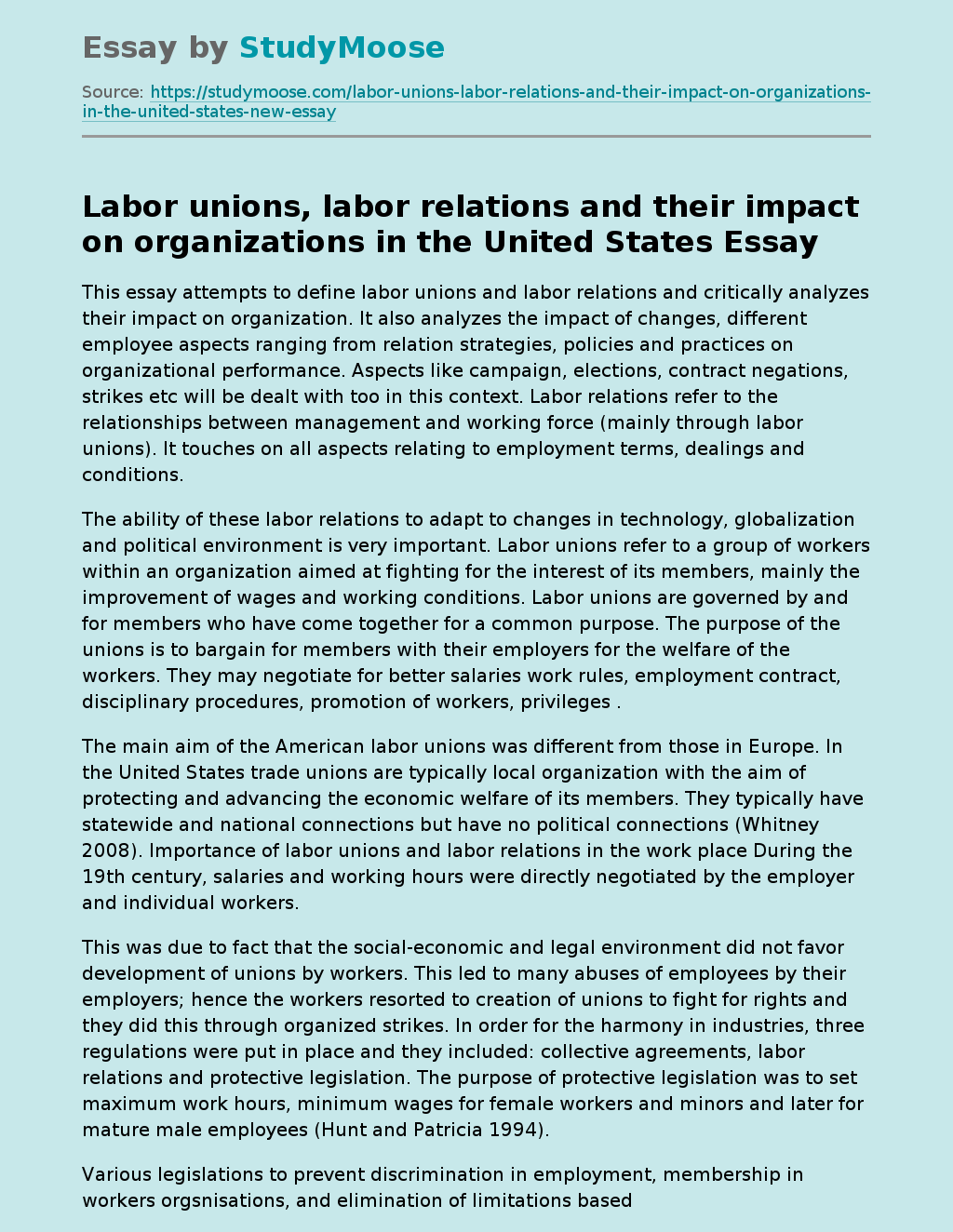