Organizations are made of individual employees who are grouped using different criteria for the achievement of certain goals and objectives. Groups can be formed in terms of departments, related tasks or shared goals. Intergroup relations occur since the groups have different functions but, they all serve the interest of the same organization(Robbins, 2014). Therefore, this leads to two types of relations; namely, intergroup conflict and intergroup competition. The two are distinct terms with different meanings and firms are capitalizing on strategies that yield positive outcomes out of this relations.

Don't use plagiarized sources.
Get Your Custom Essay on Intergroup Relations.Group behavior in organizations Just from $13,9/Page

On the other hand, intergroup competition is of a positive perspective in organizations.

It is where the various groups fight to outdo each other in terms of performance and input to the realization of the corporate goals. Intergroup competition is catalyzed by awarding best groups or departments, financial incentives, and acknowledgment for their effort(Losh, 2011). A good example of intergroup competition is departments competing to be named as the most accountable for resources assigned to them.

Management of organization needs to take advantage of conflicts and competition among groups by applying necessary strategies that will give positive outcomes. One of the strategies is ensuring efficient communication channels within the company to ensure equal access to information by all the groups(Robbins, 2014). Another strategy is providing a clear definition of role and responsibilities for each group to avoid a clash of roles. Equal resource allocation among the different groups is also an important strategy for limiting conflicts and enhancing positive competition between groups. 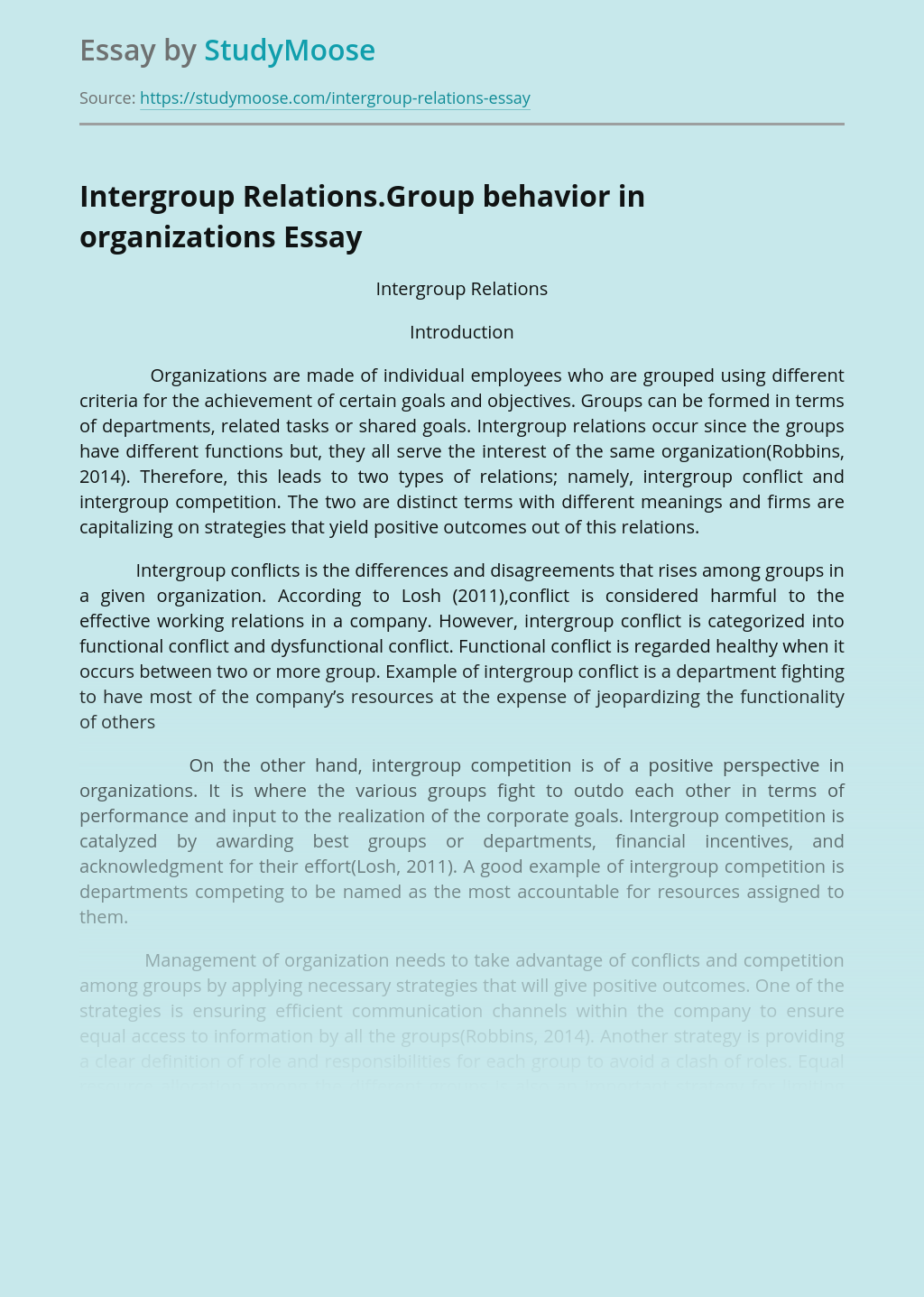 http://www.homeworkbasket.com/BUS-475/BUS-475-Week-5-Individual-Final-Strategic-Plan-and-Presentation Resources: Vision, mission, values, SWOTT analysis, balanced scorecards, and communication plan Write a 700- to 1,050-word section for your strategic plan in which you add your strategies and tactics to implement and realize your strategic objectives, measures, and targets. Include marketing and information technology strategies and tactics. Develop at least three methods to monitor...

LUKOIL, a vertically integrated oil company, and carries out exploration, acquisition, integration and subsequent efficient development of oil and gas fields outside the Russian Federation to facilitate the transformation of LUKOIL into a transnational energy corporation. LUKOIL operates in 25 countries (the most major of them are Russia, Azerbaijan, USA, Georgia, Turkey and Czech Republic)....

Get Essay
Why did Roosevelt win the 1932 election?

The Republican president, Herbert Hoover, was personally blamed for failing to deal with the consequences of the Wall Street Crash in October 1929. The Great Depression that followed was the most severe economic depression America had ever seen, and the whole world entered a state of poverty and hunger. Following the election in November 1932,...

Business, government and society– all 3 are inter-related with each other. Things remain the same for all companies. Robi is not different from that. Govt. is a system through which policies and guidelines are made and executed for the society. Society is a network of human relation. Customer of an item originates from the society...

Human Resources in the Recession: Managing and Representing People at Work in Ireland; William K Roche, Paul Teague, Anne Coughlan, Majella Fahy. The effects of the Irish recession on the manner in which people are managed at work and on how they are represented by trade unions is the subject of this study. This study examines how human resource managers and unions (where they are found) have...