People are likely to act in bizarre ways in a crowd compared to as an individual. A crowd can be defined as a set of individuals who share a common social identification of themselves in terms of that crowd. Crowd members should also share common goals and act in a coherent member (Reicher, 2008). There have been extensive amounts of research into crowd psychology, investigating the apparent causes and reasons for such behaviour to occur. Many different theories exist to attempt to explain why people fall into this interesting state of social influence when they are in crowds.

This essay will attempt to investigate how we might best explain crowd behaviour.

Le Bon’s (1896) early attempt to explain this phenomenon suggested that crowd behaviours are pathological and abnormal, where people are reduced to a primitive or instinctive mode of behaviour. This theory proposes that feelings of anonymity cause people in a crowd to lose their sense of self and responsibility and act in ways that stem from a ‘group mind’.

Through this group mind people are freed from social norms and natural animal instincts are released causing riots and irrational violence. However, since the initial suggestion of the ‘group mind’, this theory has been largely rejected. The main reasoning for this being that the theory does not acknowledge the importance of power in crowd behaviours, which appears to be a key factor in collective behaviour. One speculation that remains important from Le Bon’s group mind theory is that the feeling of crowd anonymity appears to be influential in creating various subsequent theories to explain crowd behaviour, such as the theory of deindividuation.

However, the rejection of the group mind does not mean that we should then reject the study of group processes as groups have distinctive properties from individual behaviour. Instead, we should begin to look at group processes with a different perspective. Tajfel (1970) claims that all social behaviour falls on a continuum that spans from interpersonal to intergroup behaviour. Intergroup behaviour is defined with these three criteria: the presence of two distinct groups, low variability in attitudes and behaviour of group members, and low variability in one person’s attitudes to group members. This helps to explain this readiness in which a person can switch from one view of someone to another (e.g. saying all catholics are bad people, and then going on to say the neighbor (who is a catholic) is such a lovely person). This can arise because when you become part of a group you start to see people as a category not as individuals.

The theory of Deindividuation (Deiner, 1976; and Zimbardo, 2007) followed on to these early speculations. The model states that when surrounded by others in a crowd people lose self-awareness. Consequently, people become more susceptible to external cues and to the groups motives and emotions. Ultimately, these factors may lead group members to engage in unsocial and possibly antisocial behaviours. According to Zimbardo, being part of a large group can create a sense of anonymity and diffuses personal responsibility throughout the group for the consequences of one’s actions. This can lead to the loss of identity and a reduced concern for social evaluation. Behaviour resulting can then be impulsive and irrational as there are different set ‘normal’ social and personal norms. Zimbardo’s electric shock experiment gives support to the deindividuation theory, providing evidence that the mean duration of the shock administered by deindividuated participants (they were wearing a coat and a hood to increase anonymity) was nearly twice as long than that of the people who retained their individual identities. Further research also suggests that this sense of anonymity is increased as the size of the group increases and also increases in darker conditions.

For example: the violent crowd in the Bristol riots, as darkness fell, violence escalated thus increasing the anonymity of the crowd members. Research by Jaffe and Yinon (1979) compared the mean intensity of shock administered by individuals with that administered by participants in groups of three. As they predicted, those who participated in groups consistently gave much stronger ‘shocks’ than those acting on their own giving evidence for the idea that the sense of anonymity increases with the size of the group. However, some research disagrees that increased anonymity leads to increases antisocial and aggressive behaviour. Some argue that deindividuation and anonymity may in fact result in decreased aggression and improved group relations, indicating that these antisocial behaviours may not be automatic or inevitable consequences of anonymity.

Despite much of the early literature proposing that deindividuation factors such as anonymity, loss of self-awareness and group size are associated with antisocial and aggressive behaviours, some more recent findings suggest that deindividuation influences are often sometimes related to increases in pro-social normative behaviour. Zimbardo (1969) provides support for this criticism of the deindividuation theory, having participants either dress in KKK cloaks, or a nurse uniform in an electric shock learning experiment. Results showed that those wearing the nurse uniform chose to reduce the level of shocks administered, and especially in the deindividuated conditions – the person wearing no name tag. In fact, deindividuation by itself did not increase aggression significantly, even for those wearing the KKK outfit. These findings have an influential effect on the understanding of group behaviour as they show that being in a group does not necessarily lead to destructive, antisocial behaviour as Zimbardo implied. It seems that crowd behaviour often tends to depend on the situation and how salient the norms are. Given the previous literature, Diener (1980) argues that the main factor in crowd behaviour is determined by a loss of self-awareness. He then suggests that factors present in crowd situations such as cohesion and anonymity, can lead people to focus their attention outwards and less on themselves and on personal standards. As a result, people’s behaviour becomes less self-regulated and more determined by immediate cues and norms present in groups around them. Subsequently, these cues will not always direct violence, but will vary across different situations.

The literature also fails to consider the context of behaviour or to distinguish anonymity when someone is in a group from anonymity when they are alone. In addition, members of a crowd are barely ever truly anonymous; as individuals identities are often known to other members of the crowd, and they therefore only will appear anonymous to outsiders of the crowd. People often gain a sense of pride rioting together in a group, such as supporters of the same team at a football match, which is far from losing their identities. All of the previous models focus on what is lost when part of a crowd – loss of identity, loss of individuality, and loss of self-awareness. This perspective of understanding group behaviour is a negative and highly unproductive way to think about collective behaviour; it would be much more productive to think about change (Reicher et al., 1995).

Reicher’s research into crowd behaviour has come up with three important features of crowd situations. Firstly, crowds nearly always involve more than one group. This intergroup factor has been essentially ignored in the previous literature for crowd behaviour since the group mind fallacy. Secondly, he suggests that people do not become anonymous, but take on a new identity in a crowd. Reicher (1984) studied vivosection attitudes in Science and Social Science students, with science students generally being more PRO and social sciences students more ANTI. In each category, half of the students were made aware of group membership (e.g. seated together, reffered to as groups, wore KKK membership clothing, etc). Attitudes of Science students became more pro-vivosection and social science students become more anti-vivosection. These findings oppose Deiners theory that deindividuation leads to a loss of self-regulation and gives support to Reicher’s view that you don’t lose your identity in a group based situation, but your identity changes to fall in line with group norms. This follows on from Turners (1983) suggestion of the distinction between personal and social aspects of the self. There is a shift along the interpersonal group continuum from personal identity to social identity. There is then a change in what is seen as the appropriate standard of behaviour. These standards of behaviour and norms are now determined by the group’s social identity rather than by personal or environmental factors. This can help to understand why the behaviour of rioters and police can be so different, when they are exposed to the same stimuli, for when they adopt their respective identities they become influenced by very different goals and social norms. This shows that when a person becomes part of a crowd or group, their social identity as a group member becomes more important and their individual identity becomes less important.

Although people may sometimes lose some sense of their identity at times, they will often adopt a stronger sense of their social identity as a member of that particular group. Crowd behaviour, according to Reicher, therefore involves a change rather than a loss of identity. Reicher’s new theory of crowd behaviour raised four issues that do not fall in line with Deiner’s deindividuation theory.

1. Although crowd behaviour is violent, it is often under control at the same time.
2. Crowds are not always anonymous.
3. Though people are previously suggested to lose self-awareness in crowds and thus respond to cues in particular situations, how come people will respond differently?
4. If crowd behaviour leads to a loss in identity, how come a sense of pride often results from crowd interaction? When Reicher (1987) interviewed people who were part of the St Paul’s riots he received some interesting feedback such as “we feel great, we feel confident it was a victory” and “You were grinning at everybody, because everyone was from St Paul’s”. These statements provide evidence that those feelings of anonymity and a suggested loss of identity in groups are not present when people are successful in their groups perhaps gaining a sense of pride in their group and coming together to celebrate.

To conclude, there are three important points that I would like to reiterate. Firstly, Zimbardo’s pessimism about groups is seemingly unjustified with much evidence pointing in the opposite direction. Depending on each particular situation and the norms that are important in each, behaviour can become either pro-social or anti-social in crowd environments. Though where Zimbardo does seem to be right is that people’s behaviour in a group situation can become much more extreme than how they would behave on their own. The second point is that people’s behaviour in crowds does not always worsen. Support from both Zimbardo and Deiner suggest that in groups people are subjected to a loss of identity and loss of control. However, Reicher’s more recent research into crowd behaviour suggests that this idea is mistaken. It has been shown that people’s behaviour is still in control, yet by different psychological processes. Groups seem to have a common goal in mind in acting as they do, and also that their actions are often motivated by identification with some group. Finally, when viewing group behaviour from an intergroup perspective, the goal and identity directed aspects of collective behaviour are more evident. In almost every situation of crowd behaviour, it is possible to determine an out-group, which will play an important role in the actions of the crowd.

Overall, there are many different crowd psychology theories, some of which explain different aspects of crowd behaviour. However, research gives much support to the use of intergroup perspective rather than interpersonal theories to explain this phenomenon.

Diener, E. (1976). Effects of prior destructive behavior, anonymity, an group presence on deindividuation and aggression. Journal of Personality and Social Psychology, 33, 497-507.

Reicher, S. D. (1984b). The St. Pauls’ Riot: An explanation of the limits of crowd action in terms of a social identity model. European Journal of Social Psychology, 14, 1-21.

Turner, J. C. (1983). Some comments on ‘the measurement of social orientations in the minimal group paradigm’. European Journal of Social Psychology, 13, 351-368

Crowd Behaviour. (2016, May 15). Retrieved from http://studymoose.com/crowd-behaviour-essay 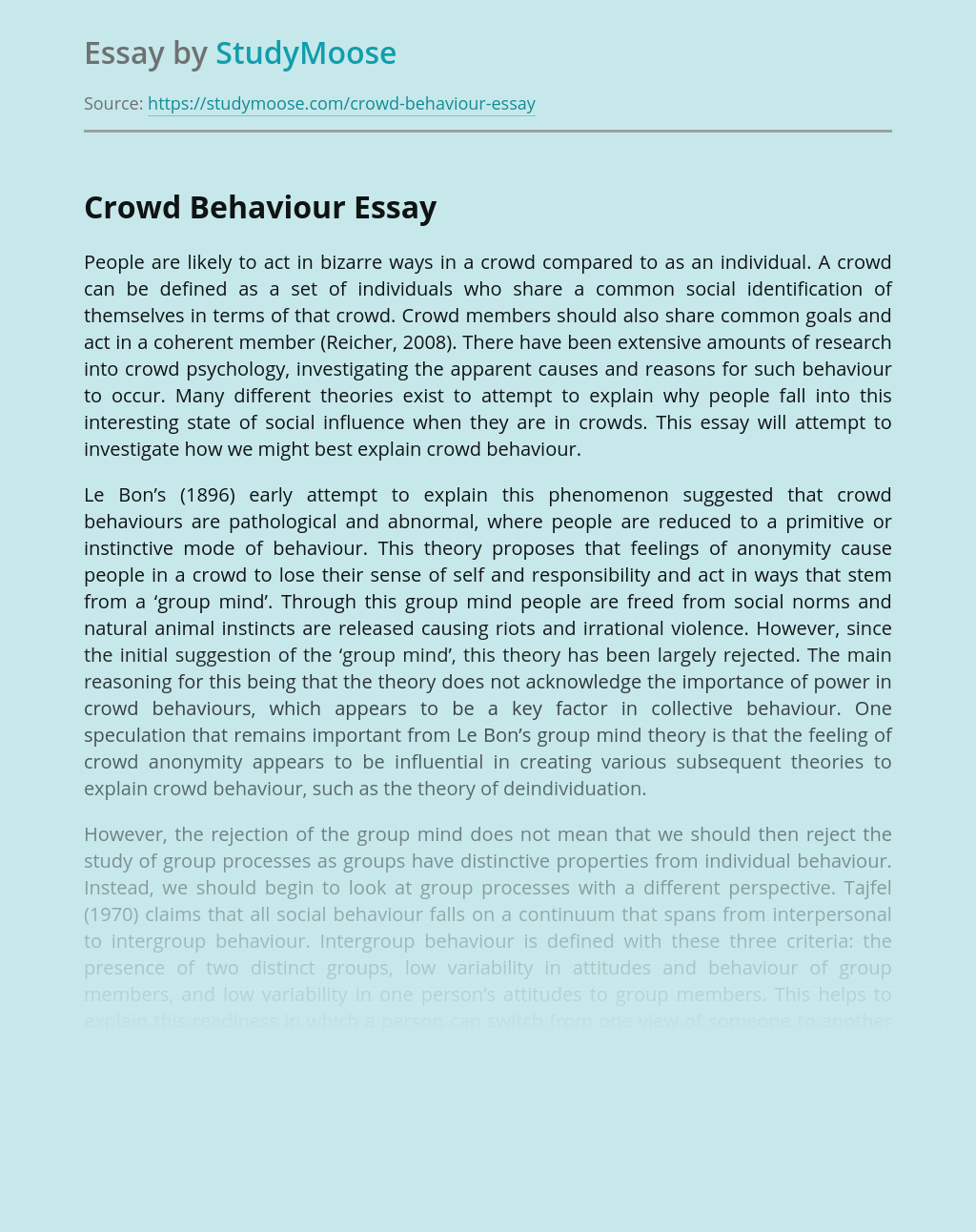