Pablo Baen Santos created the artwork, Krista. It was created in the movement of Social Realism. This artwork is oil on canvas painting which shows a female whose mouth is wrapped with a barbed wire and clenching her fists. At the back of the female subject, the Philippine flag and a lot of people are present. The female and the people can be observed to be clearly in agony and pain. It was like torturing the female and the people were likely to be dead by observation.

Don't use plagiarized sources.
Get Your Custom Essay on “Krista” by Pablo Baen Santos Critique Just from $13,9/Page

The colors used were simple, not too pale, and not too bright and associated with a shade of color black. The lines are mostly curvy and some have edges; a lot of irregular shapes were used to form the image of the humans and the flag. The lighting saturation was just enough to visualize the painting. The different elements used in this painting are color, line, shape, form and texture.

The color used for the subject is mainly brown, a warm neutral color, extensively found in living things.

It creates the wholesomeness and dullness of the painting. In addition, there are also shades of primary colors and white at the back of the female. The choice of color is good; it has shown a good picture of the painting by its color. Due to the blending of black color in all parts, the painting appears natural and firm. The diagonal lines are used to create a sense of feeling, specifically agony, and movement. The combination of lines makes up the irregular shapes of humans and the flag. A feeling of right texture is attained as the artist conveys the resemblance of humans in pain.

The Philippine flag is a symbol where the case is evident, in the Philippines. The group of people who are most likely Filipinos shows rebellion and oppression. And the female subject is likely to be the situation of the Philippines. The artist is trying to renounce the happening in the Philippines through art. As I saw this art piece, I was struck in the heart of how real and actual its message is. I was a blind not to see and care of the hardships my mother land has undergone. It was amazing that the artist used his hands not to fight but to draw what he wanted to express for a long time. It was a portrait of the truth.

Krista made by Pablo Baen Santos on 1984, depicts inang bayan (Philippine motherland) with a crown of barbed wire around her mouth like a gag. The work simultaneously embraces the themes of nationalism, censorship and the strong influence of the Catholic tradition in the Philippines. The Philippine flag and a sea of protesting bodies forge the backdrop as the female Christ holds her clenched fist in defiance. One year shy of the silver anniversary of the 1986 EDSA People Power Revolution, not much has changed in Philippine politics. In many ways, it is even worse than during Marcos’ time.

Corruption is rampant and has filtered down to all levels of government, public education is a joke, poverty levels have not improved, environmental degradation is uncontrolled, and journalists still fear for their lives. Even if we manage to elect an ethical president, there will not be much to celebrate during the revolution’s silver anniversary. It will take much, much longer than a year to apply breaks to the downward spiral that our country has gotten itself into since that historic moment. 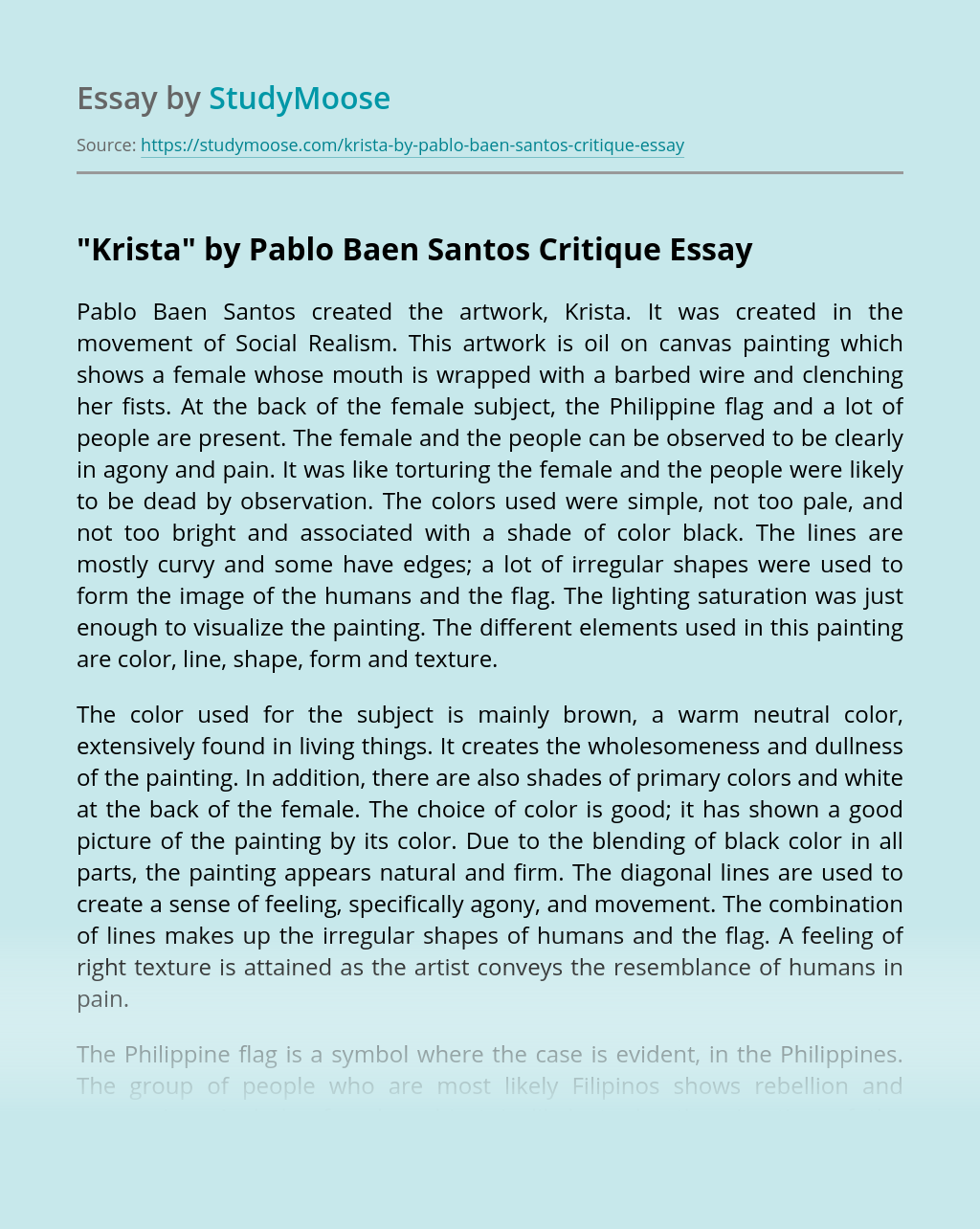 Held annually in the city of Tagum, Davao del Norte during February 21-27, Musikahan Festival also known as Musikahan sa Tagum, is a distinct cultural event celebrating Filipino excellence in music through composition, performance and production, providing the youth with more opportunities in the music industry as its goal. Local government of Tagum provides musical...

Negritos– Negritos represent a resourceful and industrious Filipinos because in their time, hardwork and patience is the core of surviving in the wild. Indonesians– Their greatest influence is farming. Because of agriculture, Filipinos found out to till the land and that is one of the significant sources of Philippine Products today. Malays– Their biggest influence...

In February 23, 1986, 2 million of Filipinos gathered 4 days along Epifanio delos Santos Avenue, more popularly known as EDSA, but in 1959 it is called as Highway 54. 25 years later, the multitude still converges on EDSA every day, comprising a vibrant complex entity of society. In 2006, Howie Severino and his I-Witness...

Emmanuel Torres is a poet, art critic, professor of English and Comparative Literature at the Ateneo de Manila and curator of its art museum who was born on April 29, 1932 in Manila. He was born on the Third Republic of the Philippines when the country was already considered independent. He witnessed the administration of...