Pablo Neruda's Use of Nature

The natural world is one that exists outside of all human constructs and limitations, and illuminates a valuable reality in the world. When considering Pablo Neruda’s body of work, a clear thematic focus on nature is visible. Many of his poems reference the natural, untouched world. This is a thematic juxtaposition to the over-structured, artificial nature of human culture. Using nature symbolically within these poems allows for a clear distinction to be drawn between the real and the artificial, and speaks to the flaws that Neruda sees within society.

He brings to the reader’s attention the value of instinctual behavior and emotion, as well as the natural qualities of humans, women in particular, and the social constraints by which all people are bound. His disapproval and call for change is apparent. Neruda’s use of natural symbolism within Walking Around and I Crave Your Mouth, Your Voice, Your Hair illustrates several separate issues of superficiality versus reality,

The poem I Crave Your Mouth, Your Voice, Your Hair serves as an excellent demonstration of this divide of the real versus the superficial.

Natural imagery is used within this poem to illustrate that the woman in question supersedes the artificial constructs of society. “Your hands the color of a savage harvest,/ hunger for the pale stones of your fingernails” is an evident example of this natural symbolism. Within this poem the female is portrayed as raw and real, an element of nature, as opposed to a part of the society that humans have created.

Neruda uses similes and metaphors to draw this comparison, illustrating her value and power within the world and upon him. Through his stylistic choices, he demonstrates how his attraction, his need for this woman, is not merely superficial and lustful, as she herself is something greater than what society allows.

Although throughout the poem the woman’s physical features are illustrated as the attractive elements of her, it is clear that it is not in fact the body to which he is speaking, but to the qualities that supersede shallow lust. Furthermore, Neruda addresses the most complex and visceral elements within the woman, which he finds the most attractive. “I want to eat the sunbeam flaring in your lovely body” may at first seem as a line speaking to lust for her body, when this is not the case. Neruda’s utilization of the sunbeam to describe her body makes this evident.

He is not addressing her body, or any material aspects, but in fact addressing the elements of true humanity, that so many people lack, within her. It is clear that he values this true sense of life more than her outward appearance, and it is this yearning for the natural and real that stands as true for all of Neruda’s works. He makes it evident that it is the elements beyond superficial beauty, those that are more than the wants or needs of society, which he truly values and adores.

This natural imagery, often used in the context of woman, speaks to Neruda’s overall belief that true emotions are fundamentally more valuable than what society has to offer. He clearly illustrates that although the artificially constructed may be more comfortable, whilst the natural may be more vulgar and unpleasant, the latter is more valuable nevertheless. It is evident throughout his works that he yearns for real emotion and true feeling, as can be seen through several lines in I Crave Your Mouth, Your Voice, Your Hair, where he describes himself as “Silent and starving,/ I prowl through the streets.” The visceral qualities here, as well as the direct comparison of himself to a predatory animal, allow the reader to understand what he perceives as important: the return to natural ways and instincts.

Accompanying this is natural emotion, without the veil of social or political acceptance present. His metaphoric hunt for this woman can be paralleled to his search for true emotion and rawness thought within the world. The woman can then be seen as a metaphor for the society that Neruda lived in, within which the natural and instinctual was hidden behind an outward appearance. This importance cast upon true emotion is also emphasized in Walking Around: “The only thing I want is to lie still like stones or wool.”

Neruda speaks to the condition of being a man in society, with many expectations placed upon him, and his discontentment with it. Instead he would prefer to simply exist, in his purest form, like stones, or wool, preferring to be nothing as opposed to living and feeling falsely as society demands. Through this poem Neruda’s frustration with his inability to do this, due to the social constraints that bind, him is apparent. The use of natural comparison allows for a portrayal of the pure and natural things he wants to feel, and that he believes others ought to feel as well.

Neruda acknowledges that society is the barrier to these true emotions, and within the poem Walking Around he discusses the constraints that the human, artificial world imposes upon people by juxtaposing elements of society against the natural world, saying “And it so happens that I walk into tailor shops and movie houses/ dried up, waterproof, like a swan made of felt”. Neruda draws a stark contrast between the situations within his life that should be moments of comfort, possibly even luxury, and how he feels, dried up, internally dead. He delivers his message through this imagery, illustrating how society has bound him, and how it binds all people living within it. He goes on to say “I don’t want to go on as a root and a tomb,/alone under the ground, a warehouse with corpses,/ half frozen, dying of grief.” This very powerful image of decay and entrapment within the earth continues to assert his message.

Through this stanza Neruda speaks to the internal death and suffocation he experiences being forced to conform, having to act and feel as is expected, while basking in false comforts and enjoying false commodities. His use of natural symbolism illustrated his wish to break free, and feel true freedom. However, he is also willing to acknowledge the firm grasp society has on all existing as a part of it. “I don’t want to go on being a root in the dark” is a clear acknowledgment of Neruda’s understanding of the system. Although in this case, the natural imagery used does not bear a positive connotation as it does in other places within his work, it is used to demonstrate power and intensity, and a stronghold upon people greater than anything else in their lives. He understands that he is a root, holding up this tree that inevitably traps him and everyone else, although he does continue to hope for an emotional and spiritual freedom, and indicates the small victories that he finds within his life.

His desire for a real experience “…pushes me into certain corners, into some moist houses, into hospitals where the bones fly out the window,/ into shoe shops that smell like vinegar” These are the places in which Neruda describes freedom, where the grip of society is not as firm and he can truly feel the ugliness and raw nature of the world can be felt. This entire stanza stands to discuss the places in society that are generally deemed as negative, and although he uses words with commonly negative connotation to describe them, the message he is putting across is a positive one. Through the graphic imagery portrayed and the disgust it evokes, Neruda calls out to the reader, to feel more often, and illustrates how these negative feelings serve as a great positive. He uses this to juxtapose the feelings of contentment so often evoked in society, and the lack of emotion that exists within this.

It is within these ugly places that Neruda feels the reality of life comes through and it is these places he deems most valuable. Through his thematic use of nature this is vividly illustrated for the reader and the importance of this freedom and its extreme power is really emphasized throughout his works. Within I Crave Your Mouth, Your Voice, Your Hair as well as Walking Around Pablo Neruda uses natural symbolism to illustrate three separate issues of superficiality versus reality, and to discuss what he views as the problem with this superficiality.

He brings to light the value of the natural within people, in particular in women; the importance of natural behavior and emotion; as well as the social constraints under which all people exist and should attempt to break away from. The use of nature symbolically does this particularly well due to the drastic juxtaposition that can then be drawn between the constructed, artificial human world and the completely untouched natural, true world. This theme is present not only within these two poems but within Neruda’s entire body of work. It serves as a unifying element for his poetry and as a message of great value for his readers.

Pablo Neruda's Use of Nature. (2016, Oct 01). Retrieved from http://studymoose.com/pablo-nerudas-use-of-nature-essay 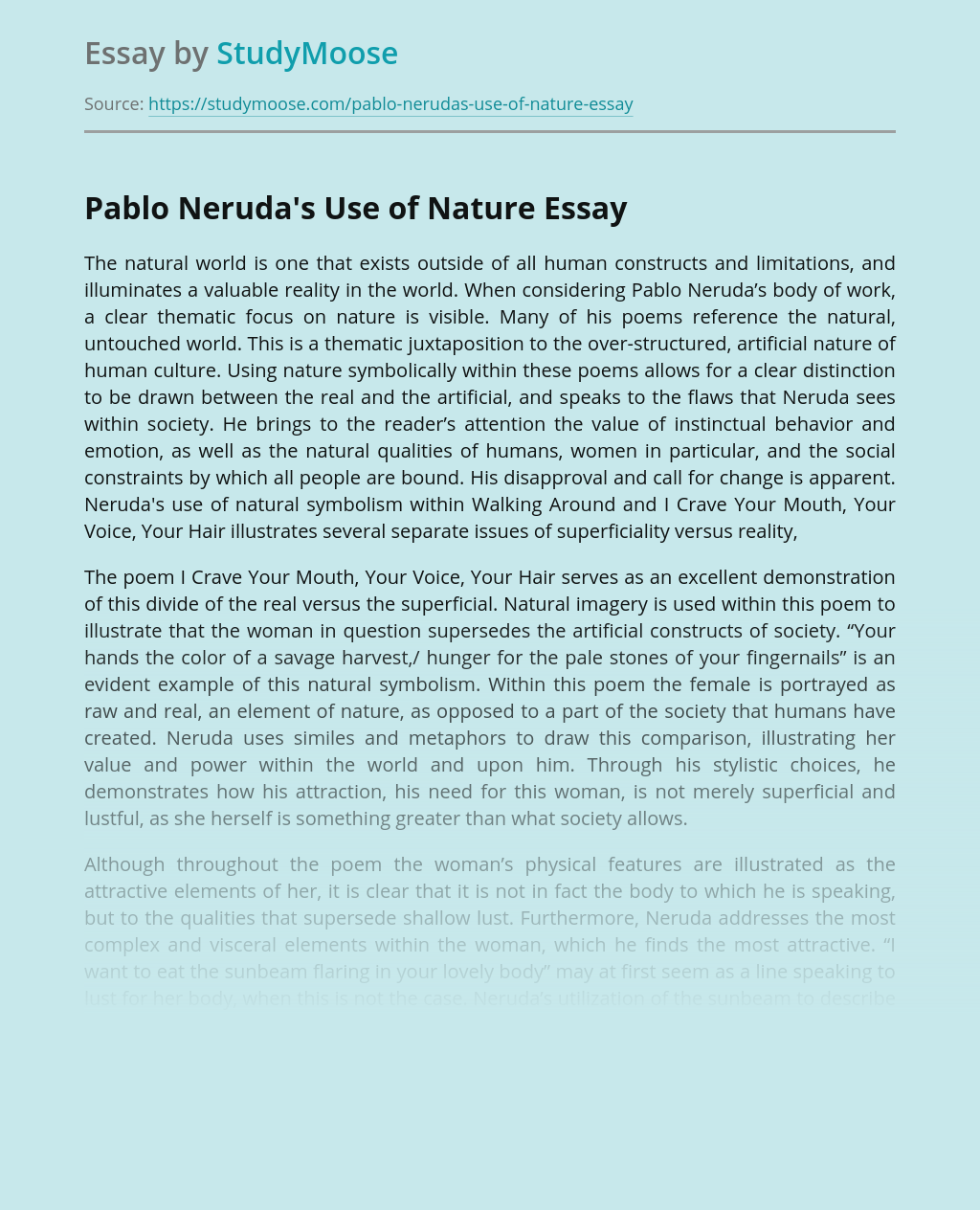 Don’t waste time
Get a verified writer to help you with Pablo Neruda’s Use of Nature
Hire verified writer
$35.80 for a 2-page paper
Stay Safe, Stay Original