Junk Food Not to Blame for America's Obesity Epidemic

In the article “How Junk Food Can End Obesity”, written by the author David H. Freedman, he focused on how many individuals believe that junk food is the main cause for the obesity problem, yet in reality it’s not really not. Throughout this written piece, Freedman included some personal research and also some experiences in which he had visited multiple food restaurants, along with food markets to back up his claim. Freedman makes the claim that these processed foods are not the only issue towards the obesity levels in the United States because he states that these big food corporations are what is going to solve the problem of obesity.

Don't use plagiarized sources. Get your custom essay on
“ Junk Food Not to Blame for America’s Obesity Epidemic ”
Get custom paper
NEW! smart matching with writer

Freedman states that people may think that junk food is the reason for the obesity problem when it is really not. He begins the article with an experience that he had buying smoothies. He believed that even if you buy food products from healthy places, it does not mean that it is going to be healthier for that individual.

Proficient in: Causes Of Obesity

He finds it interesting how a huge amount of people believe that all processed foods are the ones making people extremely sick and overweight. He then mentions Michael Pollan, a journalism professor at the University of California at Berkeley who states that processed food is the main cause of obesity in America and the only way to prevent this serious issue is to only eat wholesome foods. Freedman disagrees with Pollan because he says that even if healthier food becomes cheaper, people would not stop eating the way that they are eating. Freedman uses this in his article to show that people in general will not give up eating junk food, and they do not have to due to the fact that there is no solid evidence in which proves that processed food is actually bad for an individual. However, these processed foods do contain a lot of bad components in it just as wholesome food products.

Some evidence that he uses to back up his claim was presented in different ways. One piece of evidence that Freedman talks about in his article was when he went to Whole Foods Market, a food store that is known for selling healthy food products. He saw this food product called the “Vegan Cheesy Salad Booster” which was a snack that was clearly stated to be healthy because it was not made with genetically modified ingredients or as Pollan likes to call “processed ingredients” yet it still contained three times the fat content as a Big Mac Patty (Freedman 13). The reason why Freedman mentioned this in his article was due to the fact that it connects to his claim, which was about how wholesome foods are just as bad as processed food. They may be different in a way but when it actually comes down to the actual evidence and the facts from each food product, they both tend to have something in common. However, Michael Pollan along with the Pollanites assume that the only way to be healthy as an individual is to only eat wholesome food and absolutely no kinds of processed foods. On the other hand, Freedman does not agree with them because he believes that as long as people eat junk food with self-control then the obesity outbreak would not be as big of a problem. Another piece of evidence in which he uses to connect and back up his claim is when mentioned that even chefs that claim to be cooking healthy meals are adding a whole load of fat and high carb ingredients on everything that they are cooking, which basically adds on to the point that even healthy foods are not as healthy as people might think they are (Freedman 20).

One of the main reasons that the author from this article believes that junk food is not the reason for the obesity rate in America is due to the fact that even healthy foods contain a lot of fat in order to make it taste good. The author’s main argument about wholesome food being healthier is that wholesome food does not have the artificial flavors or genetically modified ingredients found in industrialized food and also because it does not sit around on a shelf for days while processed food does (Freedman 21). However, the author is not the only one that does not agree that junk food is bad for an individual. He introduced Robert Kushner, a physician, nutritionist, and professor at Northwestern University’s medical school. This professor stated that until he hears evidence to the contrary, he thinks it’s reasonable to include junk food or in other words processed food in our diet (Freedman 21). There is yet no actual solid evidence in which proves that these processed foods are bad for an individual’s health and while there are reasons to prefer wholesome food rather than junk food, obesity is not one of the reasons to avoid processed foods.

The warrant which backups the claim is that junk food is not the cause or effect of the high rate of obesity in America is due to the fact that there is no solid evidence to make it true. Very few people in America may argue that by eating junk food, the individual may not get all the nutrients and vitamins that a person may need in a daily diet, yet what many people do not know is the fact that there are still vitamins in processed foods. However, the only argument that the wholesome food activists actually have against junk food, is the fact that it is bad for an individual and because it is not natural and contains a lot of artificial stuff that is added into these foods. There are many other factors that put up the obesity rate that is not processed food, like exercising, the bad air quality that may affect us, and medical care as Freedman stated in his article (Freedman 24). However, people that do not agree with the author of this article are not even considering that there are other factors that cause people to be obese, for example, the individual may not be eating healthy and yet they also do not exercise enough to actually keep their weight down. Another common example could be the result of having a medical condition in which does not allow the individual to lose much weight. These factors are not even considered when studies were done with reference to processed food. While junk food does add to the obesity outbreak, it is not the only reason for it increasing in the last couple of years like the media wants us to believe. The author of this article does not only want his audience to understand that junk food is not the only problem and that wholesome food is just as bad, but eating junk food in moderation can go a long way.

Junk Food Not to Blame for America's Obesity Epidemic. (2021, Mar 02). Retrieved from http://studymoose.com/junk-food-not-to-blame-for-america-s-obesity-epidemic-essay 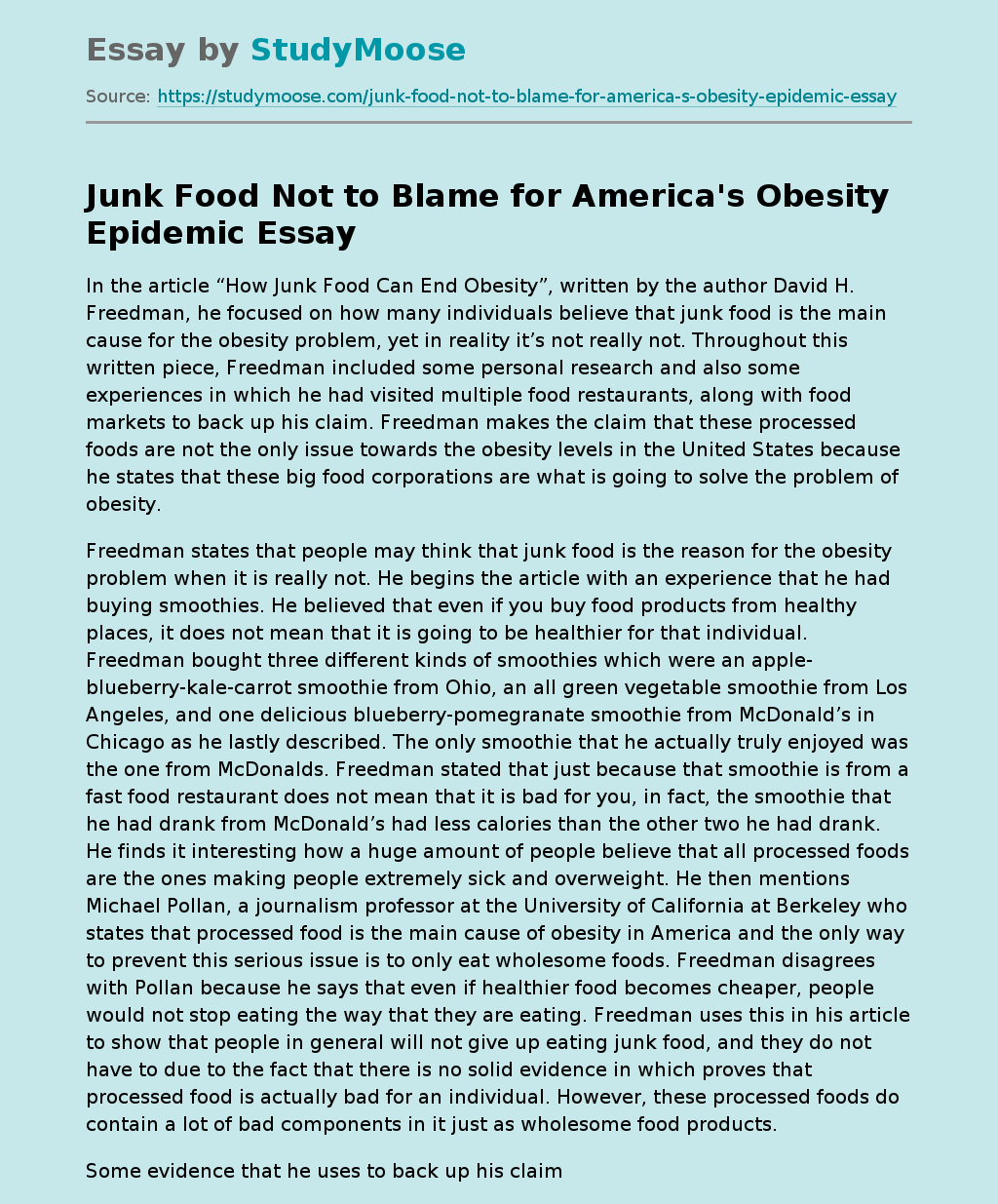