The story is told from the perspective of the adult narrator looking back on a key incident from her early childhood in which she and her neighbourhood were threatened by the unpredictable aggression of the local “bogeyman” ironically named Fearless.

The first level of conflict in “Fearless” is between the public and Fearless. This arises out of Fearless’s lack of respect for the “norm” of society. He is extremely rude and aggressive “…he lived in a state of permanent anger.

” and “He would stop, stiffen, shout and attack.” This gives us an idea of his gratuitous antagonism and violence.

Galloway gives many such descriptive examples of how Fearless contrasts against the expected rules of acceptable society. Despite the fact that he is a rude, unhygienic and violent drunk, the people capable of stopping him don’t. The men in the “pubs, barbers and bookies” “never shut him up when the anger started.” Although they could have easily protected the women and children by subduing Fearless when the anger started, they didn’t.

Much time is taken on the intensive description of Fearless’s character. He is not initially named in paragraph one. This makes Galloway’s use of ‘he’ seem much more mysterious and threatening helping to build up the malevolence of this character. This effect is also achieved by the statement “you laughed at him behind his back,” implying a bogeyman character that no one would dare laugh at in front of. The use of the word ‘specimen’ in the line “Fearless was a very wee man in a greasy gabardine coat made for a much bigger specimen altogether,” portrays Fearless as non-human or the subject of some sort of judgement or experiment as well as alienating him from the rest of the world.

The physical description of him helps us build a picture of him in our minds. Using ‘dripped’ to describe his sleeves covering his fists suggests the raggedness of his ‘greasy gabardine’. His ‘permanent fists’ highlight his perpetual anger and readiness to get into a fight. ‘Yellow knuckles’ and ‘stained teeth’ emphasise that this is a filthy man with low and decaying hygiene standards, another reason for his self – inflicted social rejection.

The narrative voice of this remarkable work is mostly in the past, with a chatty, informal tone. However the tense changes to present to throw into prominence the most important part of her memory, the day Fearless attacked her mother. This helps to serve a sense of intimacy and complicity with reader. The action in the story is not in chronological order. The author employs flashbacks with the use of the Second person ‘you’ to highlight the impact on the adult narrator of an event that happened during her childhood.

From this perspective we can see that what Fearless represents is a threat even into adulthood. By choosing such a non-linear method to show this conflict, Galloway succeeds in conveying her theme of threat against women by aggressive men. At the end of the story the adult author says ‘I still hear something like him’ referring of course to what Fearless represents. This shows how much he has touched and instilled the threat of fear, into her life.

The author chooses to avoid specificity when talking about setting, which allows the reader to interact more with story. It is set outside and in winter. The women in the story are always outdoors and so suffer Fearless’s outbursts more than the men who are cocooned inside their ‘bookies and pubs’ helping to highlight the divisions within society. The winter setting has appropriate connotations of harshness and ‘getting through’ the characters are ironically wrapped up against the elements but this offers little protection from Fearless’s abusive tirade. Overall the lack of setting foregrounds the reality of the situation and character.

As a young ‘wean’ the narrator is extremely confused as to why people, even police ignore the abuse and aggression of Fearless. She does not understand why people tolerate what should be unacceptable behaviour from Fearless. The pleading, tone of the repetition of ‘I didn’t understand’ lets us see her desperation. Because the rest of her society seem to be happy tolerating Fearless and some even seem to admire him she is frightened to air her fears and objections for fear of being isolated. However one day she is no longer the observer and Fearless attacks her and her mother. Here the tense changes from past to present and the narrating from Second to First person. The author builds up tension in this, the climax of the story in many ways, one of which is the use of very short sentences.

This creates a more hurried and exciting tone. She introduces a touch of ironic humour in the rhetorical question “what did he think we were plotting, a woman and a wean in a pixie hat?” This lightens the mood a bit and helps further emphasise Fearless’s lack of justification for attacking people in the street. When Fearless starts to shout, the young girl perhaps not thinking logically at all, or perhaps realising that someone needs to stand up to him, kicks Fearless. Fearless, having we assume been taken aback walks away muttering to himself. Rather than reassure, comfort or congratulate her daughter, her mum shouts at her for this, warning, “she’d be found dead strangled up a close one day.” In her mind this is a terrible breach of the rules of her society, this shows how seriously people take these unwritten rules. 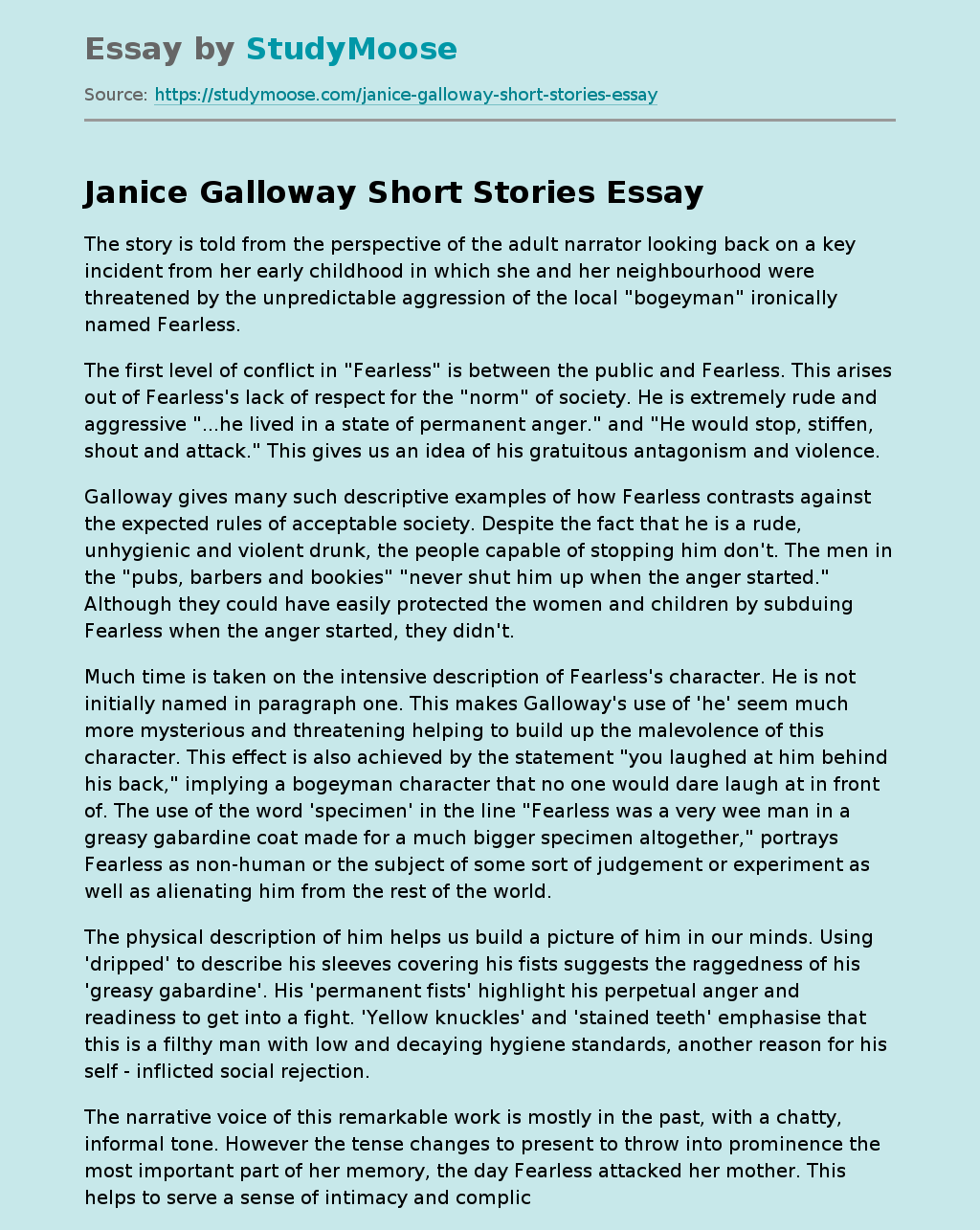