Janice Galloway’s, “Foreign Parts” explores the theme of fractured identity in an original and effective manner. In my SSL I shall explore how structure and characterisation are central in the development of this theme with close reference to the text, showing also, how Janice Galloway engaged my interest in an effective way.

Janice Galloway offers her readers something, which is a little more controversial and appealing in its approach. “Foreign Parts” follows the story of two ‘fragmented’ women’s search for belonging, as they travel a foreign country with useless maps and guides in the hope of acquiring some form of identity and independence.

Galloway explores this lack of identity, experienced at some point by us all, by fragmenting and splintering the text to reflect the jigsaw characters. This novel ponders how, “We are neither real nor proper: just fraudulent moochers in other people’s territory”, and encourages the reader to explore fully the issue of splintered identity. In doing so we cannot avoid acquiring an in-depth understanding of the techniques used by Galloway and her unique style, also an appreciation of the importance of structure to the novel’s success.

The structure, notably the use of fragmented sentencing, I believe plays an essential role in achieving this success. It not only encourages the reader to take an active part in piecing together the story, but also gives us an insight into the characters themselves and of how they are disjointed and fractured in all respects.

A foreign word on a hoarding.

Confronted by this term on arrival, it provides a fitting description of the central techniques used in the text. “Bricolage”, in French, is used when describing DIY – making something new out of bits and pieces. In my opinion, this idea is central when talking of Rona and Cassie’s relationship:

“We could make a go of it ourselves.

They wish to piece things together in a new way, provide other possibilities. They offer an alternative way of life, a challenge to conventional “heterosexuality”. This basic theme is made evident throughout the text, primarily by Galloway’s consistent use of the ‘bricolage’ structure. She also achieves this fragmentation by introducing extracts from guidebooks and road signs:

NORMANDY is an agricultural region, full of farms and meadowland, orchards and rich green pasture

These extracts are what structure Rona and Cassie’s holiday; their dependency upon these useless sources shows the lack of direction they have in their lives. The guidebook they use entitled, “Potted France” is relevant in expressing that the characters are “potted”; they do not appear whole and feel they are missing something from their lives. Primarily they lack identity. The introduction of these extracts, reinforce the degree of fragmentation suffered by these characters. However, it is only one of the many jigsaw like qualities of Rona and Cassie, who appear fragmented in every respect. The frequent use of the structure:

I think is used to show the fight for equality within their relationship and the unsure stance they also feel. Perhaps it is also relative in reimbursing the fact that Carrie and Rona are isolated from the community, yet bound together because of their likeness. The space around this structure reflects the isolation of the characters. Their lack of place is true, in not only their personal relationship, but both socially and nationally – making structure truly important in relaying the themes. Cassie and Rona go on to describe themselves as “fraudulent moochers”, this expresses how they feel they lack social position. Also described as being in “other people’s territory”, it would seem Cassie and Rona believe they have no place nationally either.

These concerns appear to be important themes within the book but I think they also reflect the inner most personalities of the two women:

“People tried to buy us breakfast every morning, desperate to practice their English. Chris loved all that, talking in a drawl about the Houses of Parliament and London Our Capital. It’s Edinburgh his bloody capital only he didn’t want to risk saying that and have them think he was less important than they thought.”

Cassie cannot understand the need to “talk in a drawl” and deny your heritage, although she continues to refer to Scotland as “such a wee country”, showing the lack of significance it appears to have. Therefore Cassie experiences uncertainty in her search for belonging not only nationally, as is suggested above, but also finding a place historically proves difficult for her, as is made evident on Cassie and Rona’s visit to a war cemetery:

“The place was full of folk who belonged to somebody but none of them were hers. She had no right play acting or making up sentimental fictions while her pal was busy.”

I think this shows perfectly Cassie’s character – she needs to belong yet fails to do so, she strives to connect with people, but cannot seem to achieve her goal. She makes up “sentimental fictions”, as she has no sentimental memories of her own to reflect upon. Her past experiences with people had a negative effect on Cassie; these experiences break into the present through memories and photographs and have a similar effect to the extracts:

“Rona took lots of pictures. It was one of the things Rona did. Pictures of disconnected non-human things like mountains waterfalls and god knows.

Cassie’s were all of people. People and animals but mostly people, smiling and telling lies.”

I believe the fact that her photos tell lies not only reveals the untrusting and quite bitter nature of Cassie, but also how Janice Galloway uses oppositions to emphasise the characters’ lack of belonging. Rona and Cassie, although close friends, differ hugely in comparison.

Rona is the organised and more together of the two, she is prepared for anything.

I think it is therefore strange that Rona (the controlled more ordered of the two) is the one to make the discoveries. For example, the sunflowers and golden dog, also the field of roses found in the dark. This is another technique, which in my opinion is used well by Galloway, she is not afraid to challenge conventional discourses or place ‘spots and stripes’ side by side. This is what I consider responsible for creating intrigue and interest within the novel. Cassie the disjointed and fragmented character is passive in these discoveries and fails to achieve independence. She strives to please the people around her and confesses that she, “got comfort from knowing I could do something he really liked.”

Their dissimilarity in every particular except one, is what makes these characters feel they have no set place within society. It is their wish to challenge the oppression placed upon them by society is what I think connects these two women.

“Somewhere in that murky wee brain of his there’s a major assumption that he’s more real somehow, that we’re there to look after his ego because we’ve got bumps in the front of our jerseys and he hasn’t…

He thinks the only reason we don’t collude is because we’re twisted, not because there was anything wrong with his expectations. Heterosexuality is a complete farce, Rona. A CON.”

This shows how these two ‘heroines’ are not afraid to stand up and speak against stereotypical views; it is this willingness to create a new lifestyle and whole other way of life that binds these two characters together. The fact that Galloway uses italics and capitalisation shows just how firm the characters are in their beliefs. The fact that they wish to challenge what is seen as “the norm”, leaves them without direction. They travel foreign countries with out-of-date, useless maps, which I believe reflects the lack of stability and direction they feel in their lives; it is their “bricolage” approach to life, which produces fresh hope for the two women. This promise of hope is solidified as the end of “Foreign Parts” approaches:

“I think it’s wonderful they don’t just leave things falling to bits. They put them back together again.”

This in a sense can be seen as Rona’s agreement with Cassie’s “BRICOLAGE” theory; an agreement with the new way of life she has offered. It is Rona’s laughter that closes the novel, which offers hope in this plan:

“It could be going home. God knows. I’ve no sense of direction me. I haven’t a bloody clue. Rona and me. We stand in separate places…Rona takes fresh aim, laughing. Defying gravity.”

This not only reflects the opposing personalities of the characters but also their rebellion against that which is expected – “defying gravity” – they defy that which is almost, in a sense, seen as mandatory in the progression of life.

These women who were fragmented, jigsawed characters have, by their own selves, began to piece together a new life; a life which defies traditional discourses. Their holiday together has given them a chance to allow self-discovery and has created hope for their future. Janice Galloway’s unique style is what I believe makes her novel, “Foreign Parts” truly accomplished. The disjointedness of her two characters is portrayed perfectly throughout the book and is essential in relaying the themes “Foreign Parts” explores.

Galloway is dependant on structure, primarily the fragmented text, to reflect the confusion and lack of identity and stability, experienced by the characters, it is this stylish use of structure that holds the key to the novel’s literary success. Galloway’s text closely intertwines theme, structure and character, it therefore proves a difficult task to dissect this novel, but once accomplished it reveals themes which are important and relevant to many people in today’s society. It is qualities such as these, which make this intelligent novel a contemporary and yet controversial success. 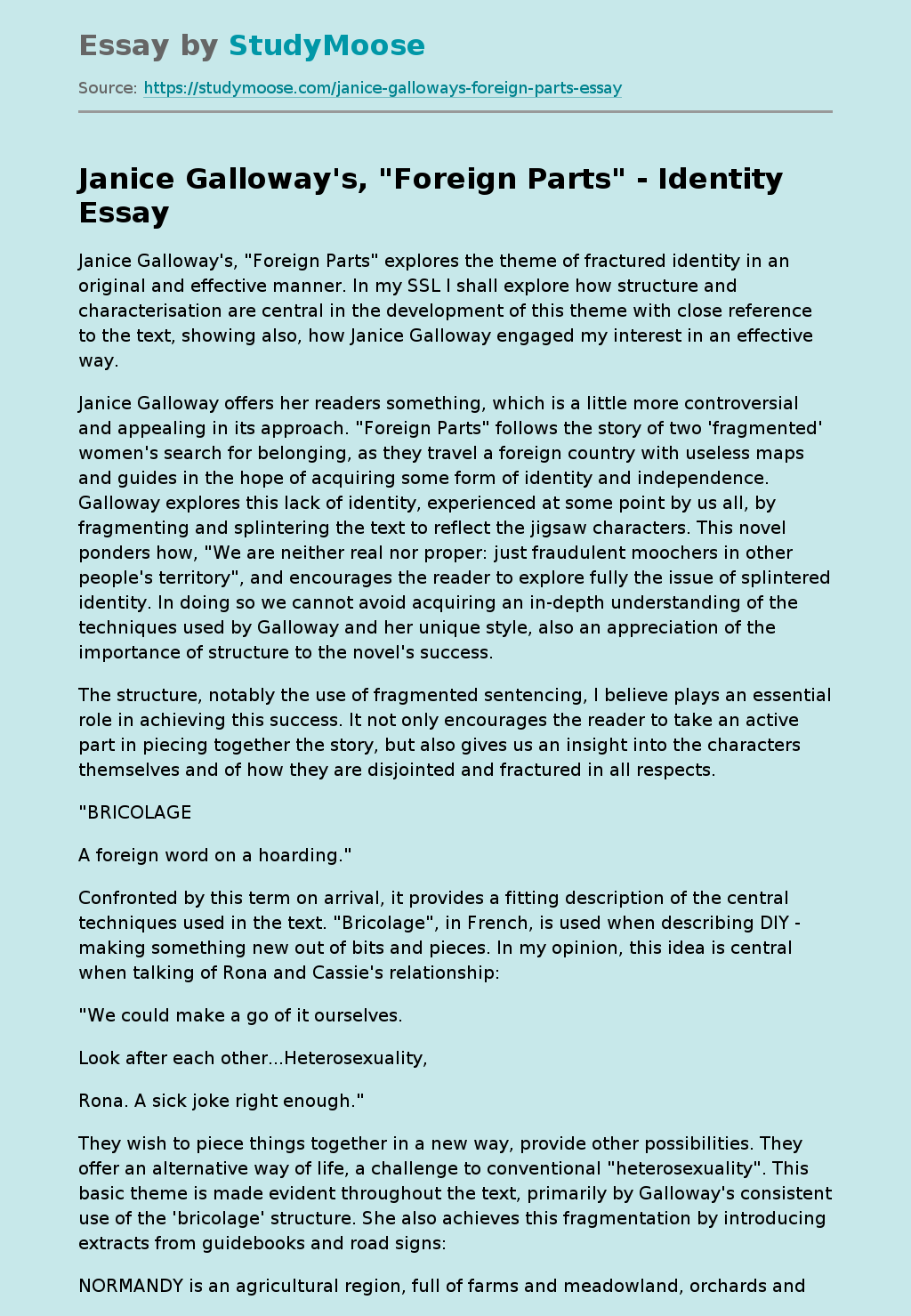