Is Mayella a Victim or a Criminal Character

The norms of society are infectiously pervasive. Sometimes it’s these norms, which don’t let the society appreciate the potential it has causing the innocent victims of society to turn into criminals. It is not just the society which plays a role in creating criminals in fact family and home life is quite influential as well. We notice this when Mayella a nineteen-year-old commits the unspeakable crime of accusing a black man of a rape who is completely innocent. Even though this event may portray Mayella as a criminal and a racist being, but Mayella herself is a victim of society’s prejudice thinking, her family, and, loneliness.

Don't use plagiarized sources. Get your custom essay on
“ Is Mayella a Victim or a Criminal Character ”
Get custom paper
NEW! smart matching with writer

In the city of Maycomb the Ewells have always been looked down on and considered white trash. The Ewells are neither accepted by white people due to their social standing nor black people who disassociate themselves with the Ewells because they are white. Mayella, being different from the other Ewells, wants to experience the world outside of the filth she lives in: “Against the fence, in a line, were six chipped-enamel slop jars holding brilliant red geraniums.

” The germaniums suggest that Mayella desires to be better than her surroundings, to aspire to higher things. Another reason as to why she immediately seizes her chance to finally access the privileges of white womanhood after years of living among pigs. She is someone who does not want her identity to be associated with the Ewells. However, at the end of the day society does not see Mayella for who she is but instead a Ewell.

Society’s norm leaves Mayella completely lonely and isolated, so her attraction to Tom Robinson is a consequence of this seclusion.

Due to her mother’s absence, Mayella being the oldest of the eight children is forced to look after the younger Ewell children, since Bob is out drinking up his relief check. Her relationship with her father is incestuous and abusive, but she doesn’t have anywhere to go or anyone to help her. However when she is approached, pitied, and helped by Tom Robinson, she craves him. But what she really feels is happiness of being with someone in hope of receiving the love she has been deprived of. Her decision to falsely accuse Tom Robinson of rape is certainly a horrendous act, but she no doubt was forced to do so by her father, Bob, to cover the fact that he beat her himself. The only reason she begins to employ the same low, underhanded tactics of persuasion as her father is for her own safety.

Loneliness is the main reason why Mayella throws herself on Tom Robinson. Being a young teen girl she has been through many hardships raising her siblings, enduring her father’s beatings, and having her mother snatched from her at a very young age. Like any girl at this age she dreams that her perfect man will come and take her away from this filth she is living in and give her all the love she has been deprived of however, she doesn’t understand that this is her misconception and in real life nothing like this will happen.

But without the right guidance and love she will be keep hurting herself by putting herself through all this exploitation. She seeks this love because she gets from nowhere else, as her mother has passed away, her dad is an alcoholic, and she has no friends. She may be a criminal for accusing Tom Robinson for something he hasn’t done but she herself is also a victim of the society, her family, and loneliness. But it’s these experiences that urged her to become a criminal. She was also a mockingbird who got exposed to the cruelty of the world causing her to kill another mockingbird.

Is Mayella a Victim or a Criminal Character. (2016, Mar 27). Retrieved from https://studymoose.com/is-mayella-a-victim-or-a-criminal-character-essay 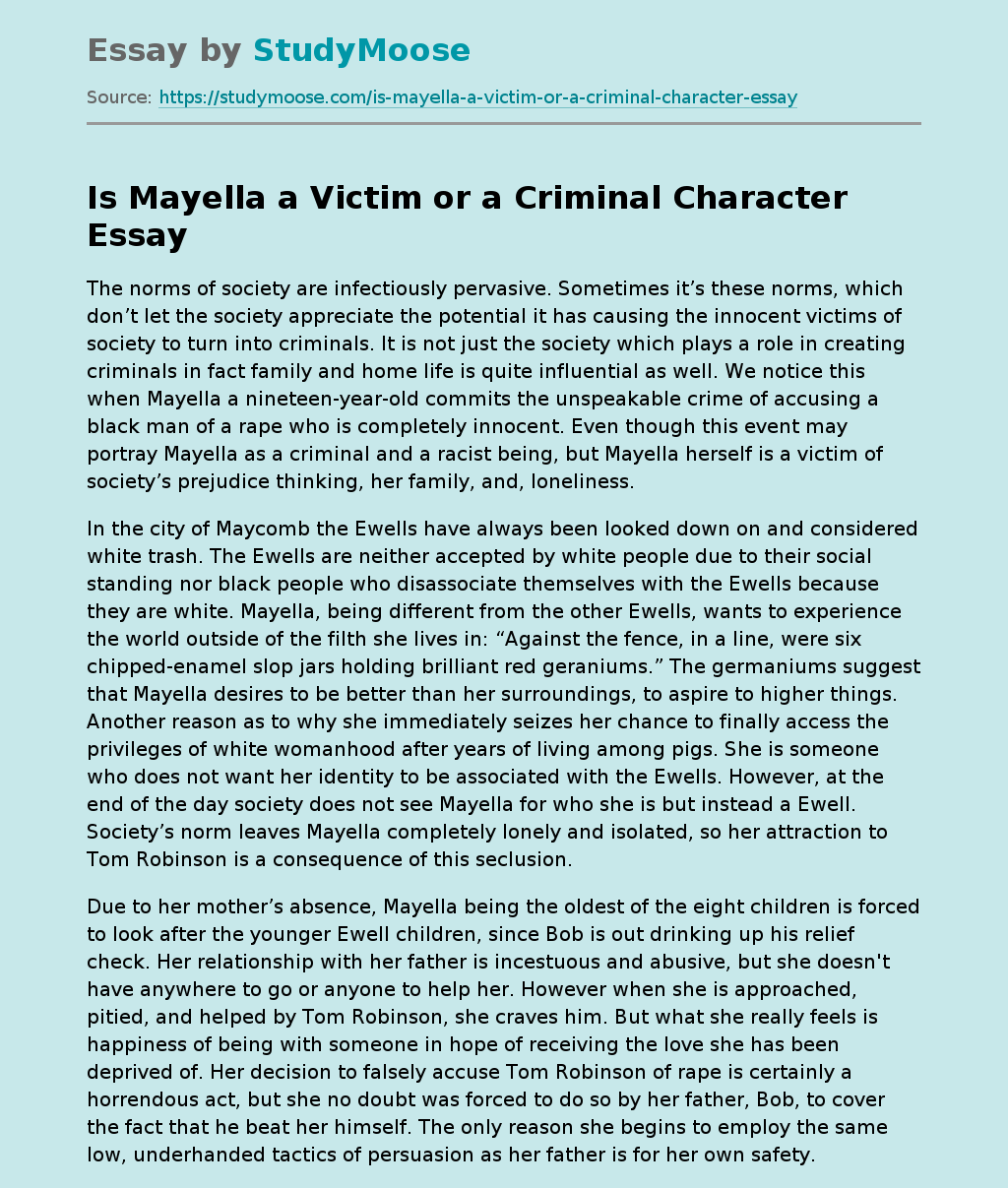