Mayella Ewell from To Kill a Mockingbird

You all have heard the testimonies of what happened to Mayella Ewell on the evening of November 21st. This sincerely is a tragedy, however most of it is not true. Somebody clearly had beaten Mayella but there is no apparent evidence that it was Tom Robinson. Tom’s testimony is very divergent from Mayella’s and Bob’s. He claims he was going home and passed the Ewell place, which seemed unusually quiet. Mayella asked him to come in to fix a door, even though nothing seemed wrong with it.

Don't use plagiarized sources. Get your custom essay on
“ Mayella Ewell from To Kill a Mockingbird ”
Get custom paper
NEW! smart matching with writer

She then asked him to get something down from the top of the wardrobe. When he stood on the chair she hugged his legs, causing him to get frightened and knock over the chair. Mayella then hugged him and attempted to kiss him. Bob Ewell saw this through the window and Mayella screamed. Tom then ran out of the house. He never forced himself on her or hit her. However, Mayella testifies that she had asked Tom Robinson to chop up some chiffarobe for her.

She then went inside to get a nickel to pay him and he attacked her from behind and she fainted. The next thing she had remembered was waking up to her father hovering over her. Mayella hesitates a lot when she is asked a question. Almost as if she is trying to think of a response that matches her father’s testimony. This may lead one to wonder; If Mayella isn’t entirely sure of what happened on this day why isn’t anyone doubting her? Is there more to the story that Mayella and Bob are leaving out? Mayella may pose as the victim here but in reality, Tom is.

Tom has always been known for having a good character. He has three kids and a wife that he tries his hardest to care and provide for. The only people who ever said anything bad about Tom was the Ewell family. Tom has always gone to church. The pastor at his church talks highly of him and tries to help the Robinson family through the hard time, for example, “You all know of Brother Tom Robinson’s trouble. He has been a faithful member of First Purchase since he was a boy. The collection taken up today and for the next three Sundays will go to Helen-his wife, to help her out at home” (160). This shows even the people that go to his church think he’s a good enough man that they decide to help his family out by donating to his family despite being in the middle of the Great Depression. Another person who emphasizes how Tom is a good man is Link Deas, Toms employer. During the trial Link Deas stands up and stresses that Tom has always been a conscientious worker; “That boy worked for me eight years an’ I ain’t had a speck o’ trouble outta him. Not a speck” (261). What would you do if you were a guy like Tom Robinson walking home and spotted a poor girl in need of help, would you have stopped and aided her struggles? Of course you would. If you are the type of man Tom is you would of helped her despite being cold, poor, or hungry. I fervently believe people like Tom Robinson make our world a better place.

Tom should also be considered innocent because of his hand. There is no way Tom could have been the one to hit Mayella. She was struck by somebody’s left hand;“If her right eye was blacked and she was beaten mostly on the right side of her face, it was tend to show that a left-handed person did it” (238). Tom has no function of his left-hand because of an accident with the cotton gin when he was younger. Everyone in the courtroom notices his left hand isn’t capable of beating Mayella;“His left arm was fully 12 inches shorter than his right, and hung dead at his side. It ended in a small shriveled hand, and from as far away as the balcony I could see that it was no use to him” (248). However, consequently, Bob Ewell is left-handed. Imagine having a body part that has entirely no use to it and then being accused of beating someone with it. That would be quite preposterous. Wouldn’t you think that would be taken into consideration of deciding guilty or innocent? That’s not the case for Tom Robinson. This poor man is still being accused despite the explicit evidence that it most certainly was not him.

Throughout Mayella’s testimony you could see that she was having troubles matching her story to her father’s. She would hesitate before answering as if she was trying to remember what here father had said during his testimony or she would just change her story. During her questioning she made it very clear she was unsure about what she was supposed to be saying. An example of this would be when Atticus asked “Do you remember him beating you about the face?”(247). Mayella replied ”No, I don’t recollect if he hit me. I mean yes I do, he hit me” (248). Bob Ewell didn’t have a very convincing testimony either. Bob says he heard Mayella scream so he looked through the window and he allegedly saw Tom raping Mayella. So he ran inside to Mayella, then ran to Mr.Tate, the sheriff , and finally ran back home. But he never got a doctor. “‘Mr. Ewell,’ Atticus began, ‘folks were doing a lot of running that night. Let’s see, you ran to the house, you ran to the window, you ran inside, you ran into Mayella, you ran for Mr. Tate. Did you, during all this running, run for a doctor?’” (234). I find this very odd that Mr.Ewell never ran to get a doctor. Especially if he is so worried about his daughters well-being. If Tom was the one that beat up Mayella why didn’t Bob get his poor daughter any medical attention? It is made very clear that Tom Robinson had nothing to do with the beating of Mayella or anything that these two claim happened to Mayella on that evening.

Imagine being the one on trial. You know you are innocent yet it seems as if everyone in that courtroom is rooting against you. What would you feel like? Unwanted? Scared? But why? All Tom ever did for Mayella is show her kindness. Tom Robinson is not guilty, he was just simply in the wrong place at the wrong time. Tom could not of hit Mayella because he has no function of his left hand. All the beating was done to her right side. Proving it had to be a left handed man that struck her. Mayella also can’t seem to get her story straight. At first she doesn’t even recall to Tom ever hitting her. Tom has always been a good man, a good father to his kids, a good husband, and a good son. He wouldn’t dare to do something so abhorrent. Bob Ewell is known to be the “Disgrace of Maycomb”. But since he is white and Tom is colored you believe Bob’s word over Tom’s. During this trial we need to put aside the racial differences and look at the fact that there is no possible way Tom beat and raped Mayella. Tom Robinson shouldn’t not be convicted of this crime. He has kids and a wife. You all seem him as the man he, which certainly is not a big violent black man. Do the right thing. Do the thing Tom Robinson would do for all of you, help him in his time of need. He shouldn’t have his whole life turned upside down because of some false accusations made against him.

Mayella Ewell from To Kill a Mockingbird. (2021, Sep 14). Retrieved from https://studymoose.com/mayella-ewell-from-to-kill-a-mockingbird-essay 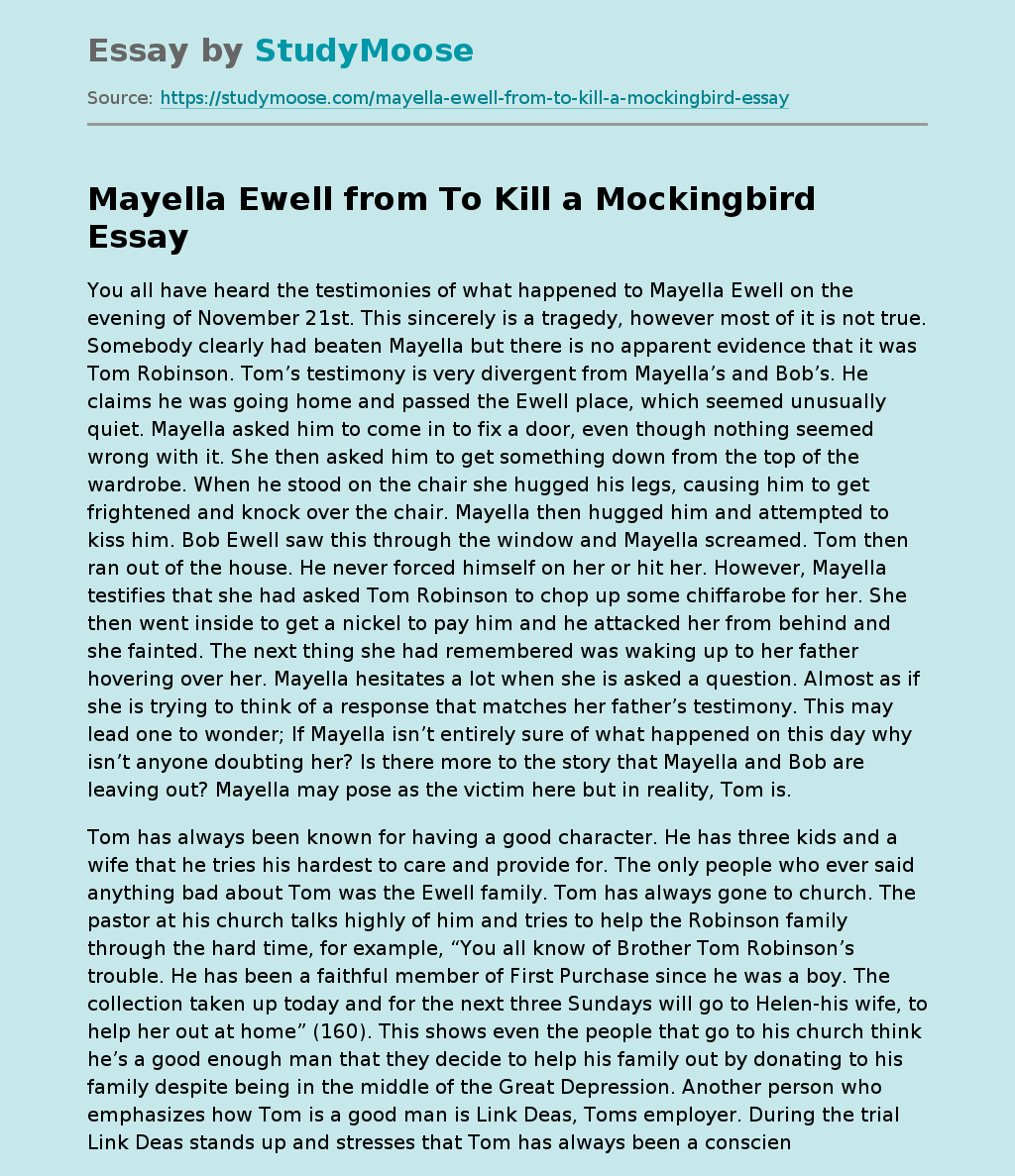