1. IntroductionIn today’s postmodernity, the self is blurred, fluid and mobile, and its free expression defines one’s place in society (Bauman, 1995). The consumption of cultural goods, such as fashionable clothing, performs an increasingly important role in the construction of personal identity and the variety of lifestyles available today liberates individuals from tradition, societal and cultural oppression and enables them to make choices that create a meaningful self-identify (Crane 2000). Fashion is also ambivalent ” for when we dress, we wear inscribed upon our bodies the obscure relationship of art, psychology and social order (Wilson,1985: 245-247).

Don't use plagiarized sources. Get your custom essay on
“ IntroductionIn today’s postmodernity the self is blurred fluid and mobile and its ”
Get custom paper
NEW! smart matching with writer

The combination of above statements leads us to think that identity and fashion are intertwined – our clothing is the physical representation of our perception, our dissatisfactions and our desires. Unfortunately, when it comes to the role of fashion for women, its observed that fashionable behaviour is never simply a question of creativity or self-expression; it is also a mark of colonization, the “anchoring” of a woman’s body into specific positions, and parts of the body often in line with male gaze.

Proficient in: Self Introduction

In a patriarchal set up,awoman in is always categorised as a mother, a wife or a widow always in connection with man but woman as an individual gets hardly portrayed and this gets infused in the mind of women that they are inferior to men. Instead of leading the lives the way they want to, they become trapped in the normative conception of being women in the patriarchal society. And thenthere’s patriarchy’s dogged reduction of women fashion to sexual objectification.

Women fashion liberation becomes entitlement for menLooking at the oppressive and normative side of fashion, women are constantly sexualized and represented as objects and are used to sell products. The western standard of beauty is not only something that influences the size and height that society is expected to strive but also for other standards of appearance that have offensive consequences such as acceptable’ features and skin tones.The waifish models that dominate the industry promote a very specific type’ of woman and these ideals have not created much space for those that fall outside the scope of these standards. Thewestern beauty norms tell a womanto be sexy but not slutty, stick-thin but still curvy, youthful but all natural.Such constant biases in the media that disregard people that do not fit the stereotypical mould has led tolack of representation of different cultures, different races anddifferent sizes; which unfortunately has massive indulgence on one’s self worth. To only produce clothes that fit a certain type of woman is to create a message of what is normative in society.In such a complex world, where women are circumscribed by the hegemonic masculinity and marginalized by the ultra-perpetuated western beauty norms, I wanted to probe into the women’s quest for identity and liberation through their fashion choices. Is no- norm ” the new norm?2. Research Development &AnalysisFashion inherently doesn’t liberate. There’s nothing inherently liberating in covering up wearing clothes, just as there’s nothing inherently liberating in being naked. It’s the individual who puts a specific meaning behind it when he/she chose to wear it. Those who are forced to wear it also provides a meaning for it (but a negative one). Thus, liberation truly lies in having the choice to live life on own terms, to be able to express. Patriarchy and the western beauty have enough oppressed and marginalised women through their normative and acceptable standards; and true liberation from that oppression would mean women overcomelabels and norms set upon them and find liberation within themselves. This necessitates having the choice to reconstitute norms and/or to make new norms ” that serve them, that represent them ” that liberate them. Fashion is a second skin (Robinson, 1988), we change outfits to express an identity or to fit different kinds of circumstances (Entwistle, 2000). This suggests thatfashion is a powerful way womancan stare backat the society and say, this is what I am because I choose it.Products are symbolic and say much more than we may realize. While it is easy to conclude the consumption of products leads us to develop a sense of who we are as a person, it does much more than that (Baudrillard, 1970). I have considered the following cases below thatare a testimony to how womenhave challenged different stereotypes and societal norms and untangled themselves fromthe web of artificial restrictions of patriarchy and narrow beauty standards thathad concealed their real self’.The Hijab ” The Veil that liberates Muslim womenSince 9/11, there has been a continuous debate of whether Islam is compatible with the West. And in this scenario, the hijab wearing Muslim women have become the unwilling symbols of a cultural war with their dress representing oppression and being normative to one side and religious freedom to the other. Today many Muslim women are challenging the stereotypes by setting out to reclaim the choice to wear a hijab as a feminist statement urging people to stop assuming that all veiled women are oppressed. In 2016, local municipalities in France passed laws banning burkini-clad women from their beaches on the grounds that the full body swimsuit defies France’s secular values (the image below). But if one peels away all the intellectualizing layers, the basic assumption behind the idea that the hijab is oppressive is that no woman would choose to dress in this way. Very simply, these people failed to see why a woman living in the West would wear hijab when the majority culture regards it with such suspicion and hostility. The answer is liberation. But to the west, the understanding of liberationis limited as they see that the hijab-clad Muslim women doesn’t have to keep up with the unattainable, narrowly-defined concept of beauty in the West”long, lush hair, a size zero figure, and flawless skin as her hair and body are cloaked.But this type of liberation only goes so far. The true liberation is a spiritual one.

IntroductionIn today's postmodernity the self is blurred fluid and mobile and its. (2019, Aug 20). Retrieved from https://studymoose.com/introductionin-todays-postmodernity-the-self-is-blurred-fluid-and-mobile-and-its-essay 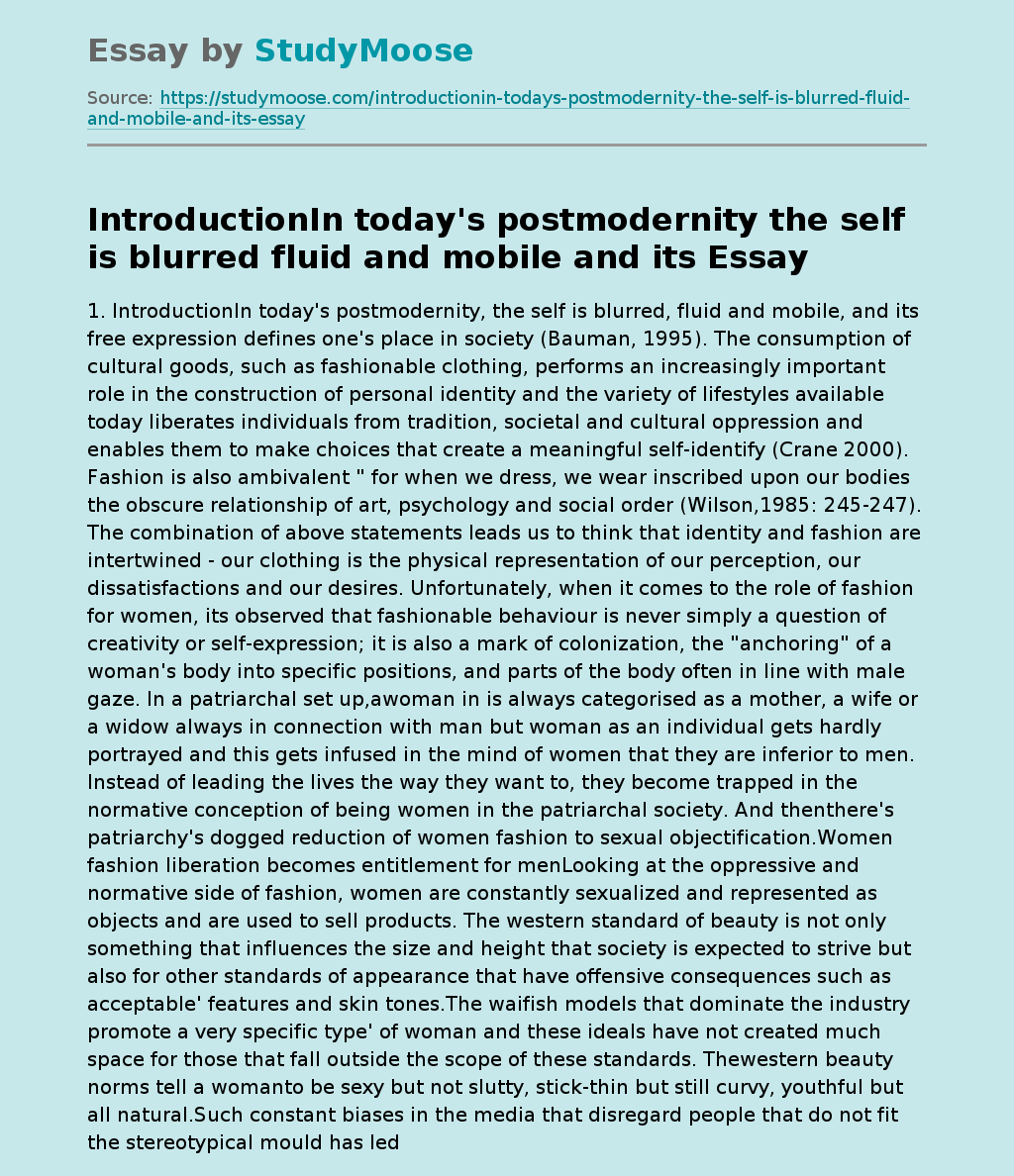