The interpersonal deception theory’s presence throughout Martin Scorsese’s film, The Departed, is made abundantly clear through the interactions between the characters. Two of the main characters, Agent Sullivan and William, both lie in order to do their jobs, and to just survive. These characters exhibit the three dominant deception theories – falsification, concealment, and equivocation, as well as utilizing eye contact, either purposely or not. The interpersonal deception theory attempts to explain the manner in which two people who are engaged in face-to-face communication deal with deception.

Don't use plagiarized sources. Get your custom essay on
“ Interpersonal Deception Theory in Martin Scorsese’s film: “The Departed” ”
Get custom paper
NEW! smart matching with writer

It is possible to detect deception from verbal and nonverbal cues. There are three dominant deception theories – falsification, concealment, and equivocation. Falsification is when one individual, the “sender”, blatantly lies to another individual, the “receiver. ” Concealment is when the sender omits certain facts; this results in deception. Equivocation is when the sender skirts the issues by changing the subject (Hearn 2006). In Martin Scorsese’s film The Departed, William, the undercover officer working with Frank Costello, and Agent Sullivan, the detective who is helping Frank Costello, both exhibit dominant deception theories.

Both lie throughout the entire film; William is a good guy pretending to be bad, while Agent Sullivan is a bad guy pretending to be good. Both are fairly good at lying, however, there are small, somewhat tell-tale signs that they are being deceptive. Agent Sullivan is a detective with the Massachusetts State Police. When he was a boy, a local criminal, Frank Costello, helped him out, and the two had been friends ever since.

When Sullivan became a detective on a case where the police were trying to capture Costello, Sullivan did everything he could to help Costello.

Because of his two-faced nature, he had to lie to his girlfriend, Madolyn, and the men he worked with, including his boss. Agent Sullivan worked his deception on those around him in two obvious ways – concealment and equivocation. The first example is of equivocation. About half way through the film, Sullivan got a phone call from Costello, and Madolyn answered the phone. When Sullivan got off the phone, Madolyn asked him who had called him. Sullivan told her that it was his boss.

She knew he was lying to her, so he skirted the issue by saying that there are things about his job that he could not tell her, things that she did not even want to know. He even tried to make a joke about her questions interfering with an ongoing investigation. He successfully got her mind off of the actual issue at hand, the issue of the mysterious caller. The example of concealment is demonstrated throughout the film in regards to Agent Sullivan. Sullivan spends the entire film trying not to be found out as the man Costello has in the police department.

When things start to really unravel, Sullivan is assigned to find the leak in the department, and he actually takes on the task. From here on out, Sullivan works hard to continue to conceal his true identity. William was working for the Massachusetts State Police as an undercover cop. He did not successfully complete the training at the Police Academy, but he wanted to be a cop. No one knew he was working for the police department except for two high-ranking officers. William became a trusted friend of Frank Costello while investigating him.

This gave William the edge he needed to capture Costello, but deceiving Costello could have proved to be deadly. William worked his deception on Costello in two ways – falsification and concealment. In a scene where Costello wanted to talk to William about a “rat” in the operation, William flat-out lied to him, telling Costello that he was not the rat. William knew that Costello suspected him of being the rat, but William kept denying it. Costello began to believe him. William successfully lied his way out of a potentially deadly situation. William also used the trick of concealment to his advantage.

He, first and foremost, concealed his identity, not only from Costello and his gang, but also from other officers in the police department. No one in the police department knew that he was working undercover. Because he did not graduate from the Police Academy, William was not a real police officer. Because of this, he went virtually undetected. William’s concealment of his true identity was successful, until Costello wanted his real name, social security number, and bank account numbers. It was then that William knew he had to find a way out.

From here on out, things began to fall apart. Both Agent Sullivan’s and William’s deception could have been detected. Most individuals believe that they can tell when a person is lying to them. They can detect deception by listening and watching the sender. Signs such as eye contact/rapid eye movement, body rigidity, and fidgeting can be tell-tale signs of when an individual is trying to deceive another individual. Eye contact is held as the number one indicator of truth or deception. Most believe that if an individual holds strong eye contact, then that person is being truthful.

On the other hand, if one’s eyes move rapidly, or one cannot look another in the eye while talking to them, it is an indication of deception. Law enforcement interviewers and interrogators believe that when a person is not being truthful, they will break eye contact and either look to the right or to the left. This belief, however, is not substantiated (Walters 2000). Although proven an unreliable means of detecting deception, this does not stop Scorsese from implementing this strategy when it comes to Agent Sullivan’s behavior.

Agent Sullivan’s behavior, if paid attention to, would have alerted anyone to his deception. For example, Sullivan never made complete eye contact while lying. He does make good eye contact when he says that Costello has a man in the police department, because that information is true. However, when he says that he is working on finding out who it is, he looks briefly at the floor. Sullivan breaks eye contact, an indication that he is lying. In actuality, Sullivan himself is the man Costello has in the police department, so Sullivan has no intention of finding out who the rat is.

Another example of Agent Sullivan’s odd behavior is at the sting. Sullivan calls Costello to inform him that he is being watched by the police. Later, Sullivan finds out that the FBI is present and is monitoring cellular phone activity. Sullivan begins to sneak nervous glances around the room, looking to see if anyone has detected his involvement with Costello. In the scene where William meets Costello for a discussion on who the “rat” is, William makes deliberate, strong eye contact. Unlike Agent Sullivan, when William lies to Costello, William looks him straight in the eye and does not waiver.

William is nervous about meeting with Costello, but he carries himself as though he is in control of the situation. Although William was nervous, he does not back down from Costello. This forces Costello to back down and to take William’s word that he is not the rat at face value. It is generally believed that when someone breaks eye contact with the person they are talking to, they could be lying. However, when someone makes deliberate eye contact, that could mean that they are trying to conceal the fact that they are indeed lying.

Deliberate eye contact also means that the person maintaining strong eye contact is trying to maintain dominance or control over the person he is speaking with. This is done is such a way that the receiver would not even think about questioning the accuracy of the sender’s words (Walters 2000). This is how William wins over Costello. The term “leakage” is used to refer to any behavior outside of a deceiver’s conscious controls that could signal dishonesty. These signals could include the formerly mentioned body rigidity and fidgeting (Schneider 2007).

For example, when Agent Sullivan is at the sting, after he found out that the FBI were monitoring cellular phone activity, he sits very still, only moving his head to glance around the room. His body seems to become very rigid, perched uncomfortably on a table. He also seems to be fidgeting inside his coat pocket. In actuality, however, he is sending a text message to Costello that says, “no phones. ” Sullivan could have “leaked” his involvement with Costello if someone had been paying attention.

The characters of Agent Sullivan and William exhibit falsification, concealment, and equivocation. The use of eye contact, both deliberate and not, make the characters more human. All of the signs of dishonesty that these two characters exhibited made the viewer believe that those characters were real. Both characters’ deceptions could have been seen through, like most people’s deceptions, but they were not detected. They carried their burdens well, working their hardest to not only do their jobs, but to survive. 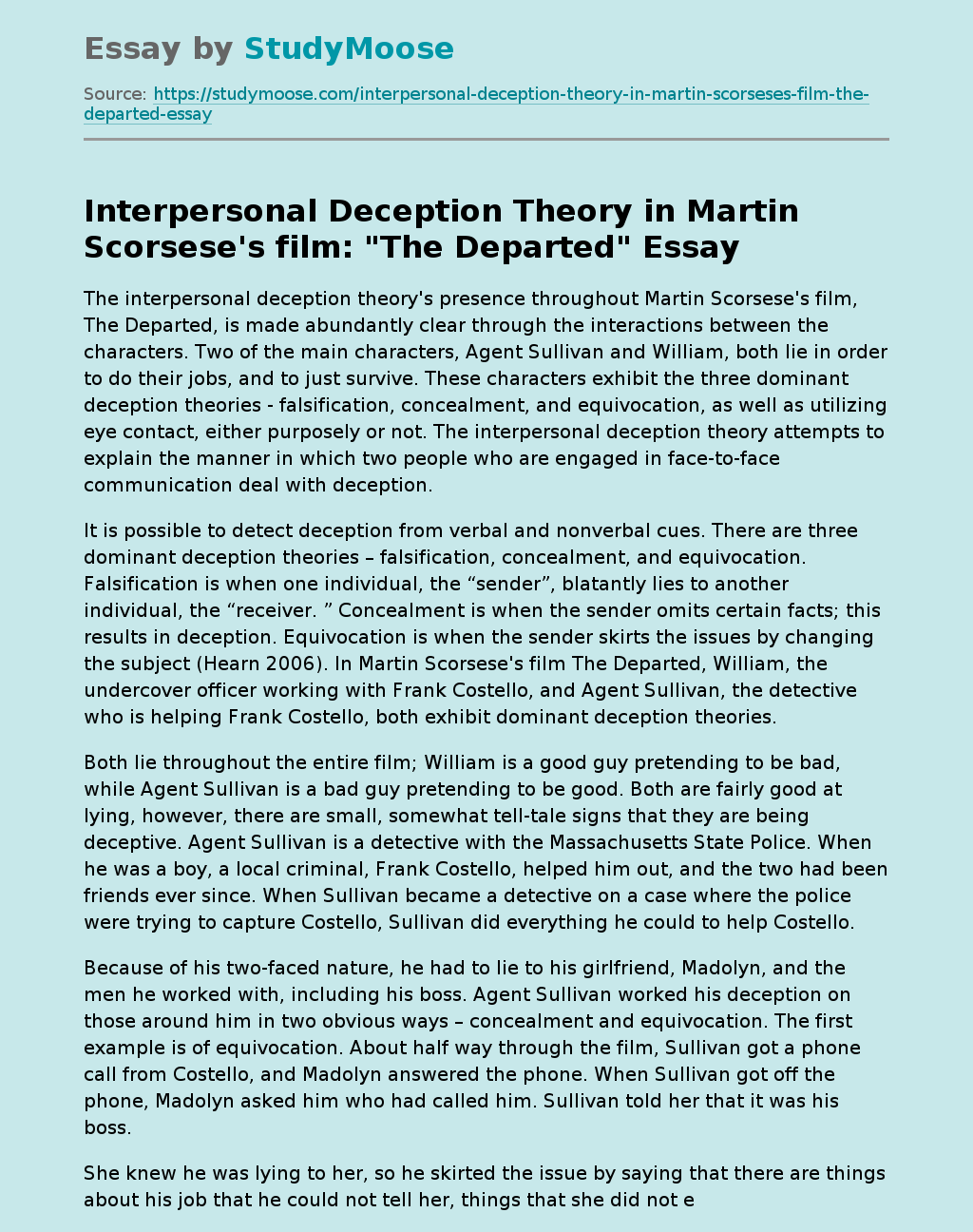