Theories of Criminology and the Departed

Theories of Criminology and The Departed Martin Scorcese’s film, The Departed, gives a great depiction of contrasting theories of the origins of crime, and how they may be applied to each character. Each of the four major theories, Choice Theory, Trait Theory, Social Structure Theory, and Social Process Theory can be seen to be accurate at one or more points in the film, but the film ultimately advocates for Choice Theory. Each of the major characters has the opportunity to choose who they ultimately want to be.

Turn in your highest-quality paper
Get a qualified writer to help you with
“ Theories of Criminology and the Departed ”
Get high-quality paper
NEW! AI matching with writer

From the moment that the over-arching villain of the film, Frank Costello, is introduced it is apparent how he understand his place in the framework of things. He states, “l don’t want to be a product of my environment. I want my environment to be a product of me. ” In this one statement he refutes the effect of Social Structure and Social Process theories on himself, and advocates for Choice Theory. He has made the choice to become who he is, and to engage in criminal activities.

He did not have it dictated to him because of his environment, or his exposure to criminal ctivities. It was a choice. This is contrasted with the two central figures in the film, undercover state police officer Billy Costigan, and Costello’s mole on the inside of the state police, Colin Sullivan. Fresh out of the police academy Costigan is confronted not only with his past and upbringing, as a two parent, two accent, mixture of North shore and South Boston, but also with his family connections with South Boston organized crime through his father’s side of the family.

He has the family traits to Justify his being nvolved in criminal activities, but lacked the poor upbringing (Social Structure) that could have been expected for someone with his connections. It isn’t until he is sent undercover, through the prison system and his low level criminal cousin, that he exposed to criminal activities in a major way (Social Process). Even as he becomes more involved in the day to day criminal activities of the Costello organization, he makes a choice to remain a loyal state police officer and completes his assignment, ven to the point where it leads to his death.

Sullivan is the opposite story. He was raised in the poor area of South Boston, that was under the sway of the Costello organization (Social Structure), but did not have the family connections of Costigan. He was groomed into the inner circles of the organization by Costello himself from a very early age, getting frequent and early exposure to criminal activities (Social Process), with the ultimate idea that he would become an informant on the inside of the state police.

He grows up being completely oyal to the organization that he grew up in, but when presented with the chance to stop functioning in the criminal enterprise, and become legitimate upon Costello’s death, he makes the attempt to. He chooses to leave crime behind until he is confronted and threatened by Costigan’s undercover work. Each of these major characters could have been explained by competing theories of criminology, but ultimately the film portrays a situation where they are all making a choice of who they are and what they’ll do. Theories of Criminology and the Departed By macbezz

Theories of Criminology and the Departed. (2018, Nov 24). Retrieved from https://studymoose.com/theories-of-criminology-and-the-departed-essay 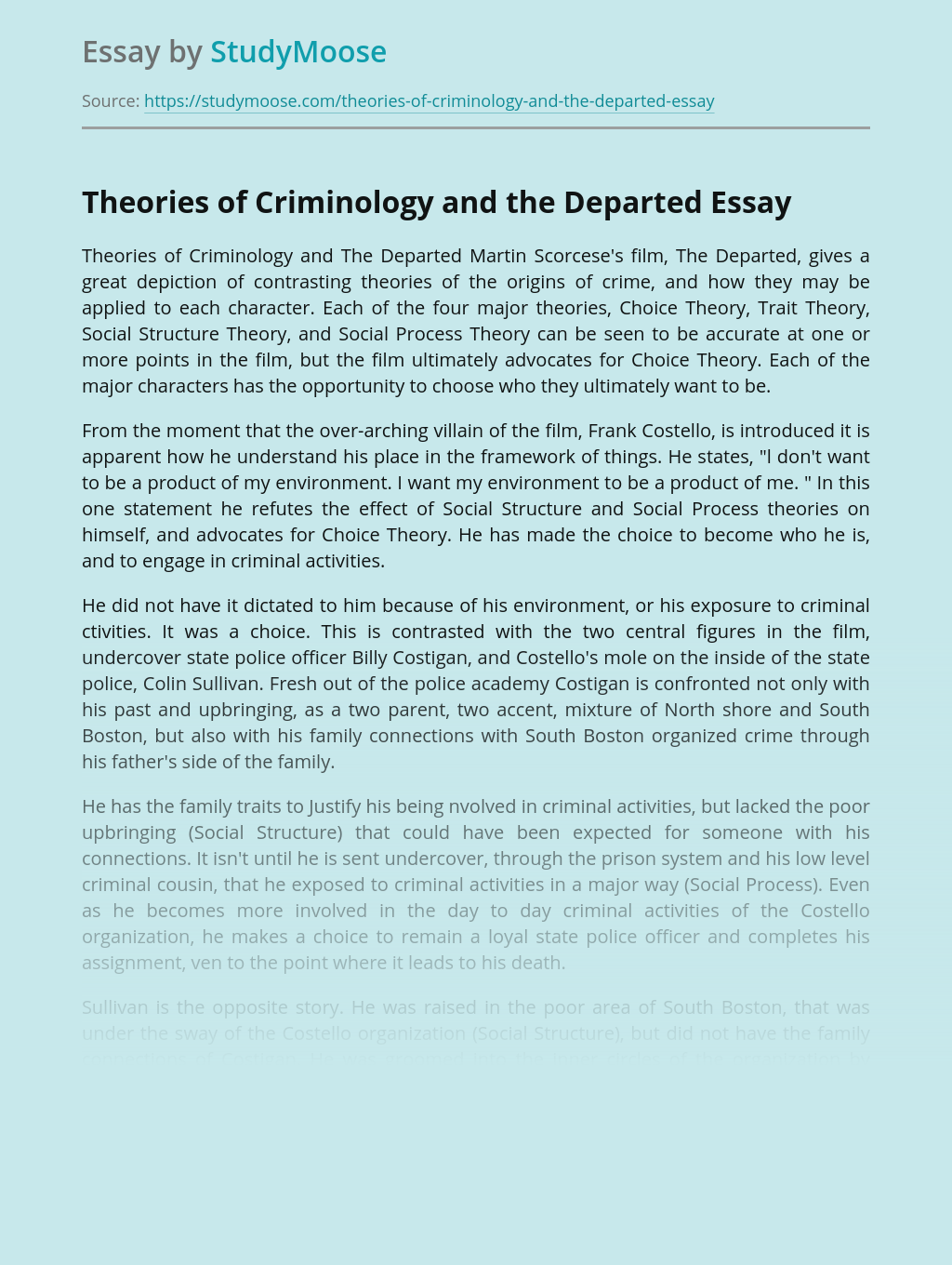 Turn in your highest-quality paper
Get a qualified writer to help you with
“ Theories of Criminology and the Departed ”
Get high-quality paper
Helping students since 2015
Stay Safe, Stay Original