The basic economic problem of scarcity refers to the situation in which finite factor inputs are insufficient to produce goods and services to satisfy infinite human wants. It is incontrovertible and irrefutable that all societies face the basic problem of scarcity due to limited resources and unlimited wants. Scarcity makes it necessary for us to make the most of what we have. In trying to obtain the highest level of satisfaction from available resources, good or rational choices have to be made.

Don't use plagiarized sources. Get your custom essay on
“ Basic Economic problem of Scarcity ”
Get custom paper
NEW! smart matching with writer

The concept of choice applies to all decision-making units.

We are continually uncovering new wants and demands. Scarcity implies that not all of society’s goals can be pursued simultaneously, as the many different kinds of resources (production factors) are available only in limited amounts. The various factors of production refer to the inputs used in the production of goods and services.

They are divided into four broad categories: land, labour, capital and entrepreneurship. Labour refers to human effort-physical and mental-which is directed to the production of goods and services. Normally the labour force of a country consists of everyone of the working age (14-64), and this form of resource is largely dictated and governed by the demographic distribution within the country (or any other geographical entity), and is therefore restricted by dependency ratio. Land refers to all the productive resources supplied by nature, and various aspects of such a form of resource are limited and exhaustible. Capital is a man-made resource used in the production of goods and services, which includes machines, tools, and buildings.

The production capacity of a country therefore, is dependent on the amount of capital the country possesses. Entrepreneurship is a human resource that is separate from labour. An entrepreneur is one that performs the functions of organizing and managing the factors of production, of innovating new products and ways of production and he takes the risks of being in business. Without entrepreneurship, virtually no business organisation can operate. However, such a form of human resource depends on amount of talented people capable of generating innovative ideas.

The PPC is a economic framework that can be used to illustrate concepts of scarcity, choices and opportunity costs. All the points on the PPC represent productive efficient levels of production. Scarcity is illustrated, therefore, by the unattainable combinations outside the PPC as well as the fact that society has to choose between combinations of the two goods as resources cannot be used to produce all at the same time, and the combinations of goods (such as amount od capital and consumer goods in the case of the PPC above) the economy eventually chooses depends on its priorities). The downward (negative) sloping gradient of the PPC also illustrates the concept of opportunity cost. To choose to have more of one good means having to give up some of the other good, given that the limited resources have been fully and efficiently employed (increased output of one product in turn causes the out put of the other product to fall due to limited resources and scarcity)

Economic agents employ several analytical tools to make rational choices. They take into account the opportunity costs and often make decisions based on the marginalist principle. Every time a choice is made, an opportunity cost is incurred. Opportunity cost refers to the real cost in terms of the
next best alternative that has to be forgone, and it arises due to the fact that the resources available to meet the unlimited wants are limited so that not all of the wants can be fully satisfied. An economic agent, therefore, has to make a decision based on his current priorities and sacrifice the next best alternative.

In conclusion, due to the fact that resources are high limited, all societies face the problem of scarcity and hence have to make decisions like a household does. A society has to decide what and how much to produce, how to produce and for whom to produce. Firstly, the society must decide what goods it is going to produce (and hence what not to produce). Such choices usually take the form of more of one thing and less of the other (i.e. it needs to choose the composition of total output. Secondly, most goods can be produced by a variety of methods, and a society must decide on the methods of production to be adopted. Thirdly, the total output needs to be distributed among members of the society, and the society therefore needs to consider how it can distribute its goods. Therefore, we can conclusively assert that the basic economic problem of scarcity compels economic agents to make rational decisions (such as choosing the composition of total output) to maximize total profit and to comply with their current priorities. 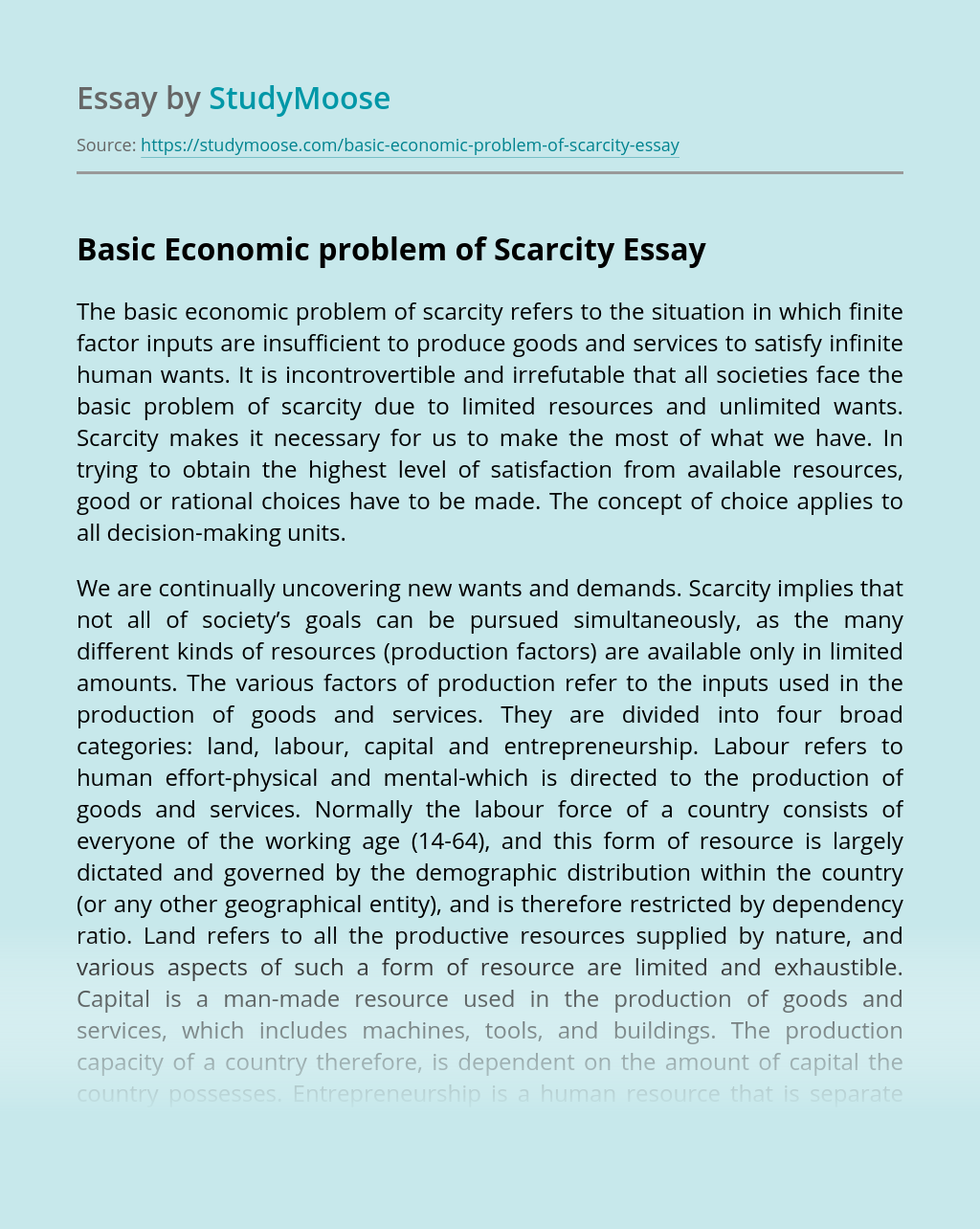