Water is an essential resource to sustain life. From 50 – 90 percent of the weight of living organisms is water. Water is the major constituent of living matter. Water, essential for growth of all crops, is the natural resource in shortest supply. More than 20 countries lack sufficient water to grow enough food for their people. The situation is getting worse as needs for water rise along with population growth, urbanization and increases in household and industrial uses. According to a UN report two-thirds of mankind will suffer moderate to severe water crisis within next 30 years if remedial steps are not taken.

Don't use plagiarized sources. Get your custom essay on
“ Water Scarcity in India ”
Get custom paper
NEW! smart matching with writer

Water scarcity in India is miserable. Today, there are thousands of villagers and towns facing an acute drinking water shortage. Water supply plants are not able to supply sufficient water in cities. Pollution on our water resources is on rise.

Water management efforts have yet not been made very effective. It has given us a poor scenario. Water demand in India is for four primary consumptives uses, namely irrigation, power production, domestic and industrial. Agriculture, and other water management aspects are there in the constitutions of India, but the water crisis still remains an incomplete national task. In the area of water management -it is known that water quality deteriorates due to repeated use, no serious attention has been paid to the qualitative aspect of water resources.

The time is not far away that the volume of wastewater discharged by the Indian industry may be half the volume of domestic sewage generated in the cities. The water of Ganga and Yamuna is the worst victim as both wastewater (Human and Industrial) mixes.

How water is conserved, used and distributed in communities and the quality of the water available can determine if there is enough to meet the demands of households, farms, industry and the environment. Water scarcity forces people to rely on unsafe sources of drinking water. It also means they cannot bathe or clean their clothes or homes properly. Poor water quality can increase the risk of such diarrheal diseases as cholera, typhoid fever and dysentery, and other water-borne infections. Water scarcity can lead to diseases such as trachoma (an eye infection that can lead to blindness), plague and typhus. Water scarcity encourages people to store water in their homes. This can increase the risk of household water contamination and provide breeding grounds for mosquitoes – which are carriers of dengue fever, malaria and other diseases. Water scarcity underscores the need for better water management. A lack of water has driven up the use of wastewater for agricultural production in poor urban and rural communities. More than 10% of people worldwide consume foods irrigated by wastewater that can contain chemicals or disease-causing organisms.

India is the wettest place in the world which receives an annual rainfall of about 15,000 mm and yet the village often faces drinking water shortage because of widespread deforestation resulting in drying up of water sources soon after raining season is over. The other side of the picture is that Jasalmer in Rajasthan. It receives just about 100 mm of annual rainfall and yet this desert town could manage to collect enough water for its use. Control strategy for water management in India is slow. Cities are considered as major sources of pollution. It may be the Yamuna in Delhi or the Ganga in Kanpur. Both the sacred rivers are badly polluted.. Every drop of water used in the industry is levied.

The industry has become cautious of the wasteful use of water and realized the recycling process as an integrated concept while planning water use.. In order to avoid establishment of new industries without pollution, the licensing procedures and subsequent follow-up action need to be streamlined. While setting up any new industry, environment impact assessment should be made more effective for making correct decisions regarding possible negative impact and nature and extent of abatement technology required for mitigating ill-effects of pollution and possible Eco-degradation.

Millennium Development Goal number 7, target 10 aims to halve the proportion of people without sustainable access to safe drinking water and basic sanitation by 2015 . Water scarcity could threaten progress to reach this target. As governments and community organizations make it a priority to deliver adequate supplies of quality water to people, individuals can help by learning how to conserve and protect the resource in their daily lives. Good water management also reduces breeding sites for such insects as mosquitoes that can transmit diseasees and prevents the spread of water-borne infectionsWater is Nature’s precious gift, a bliss every human being needs. People of the world must realize it Or the day is not far away when as the late King Hussein of Jordan said: “Water is the one issue, that could drive the nations of this region to war. 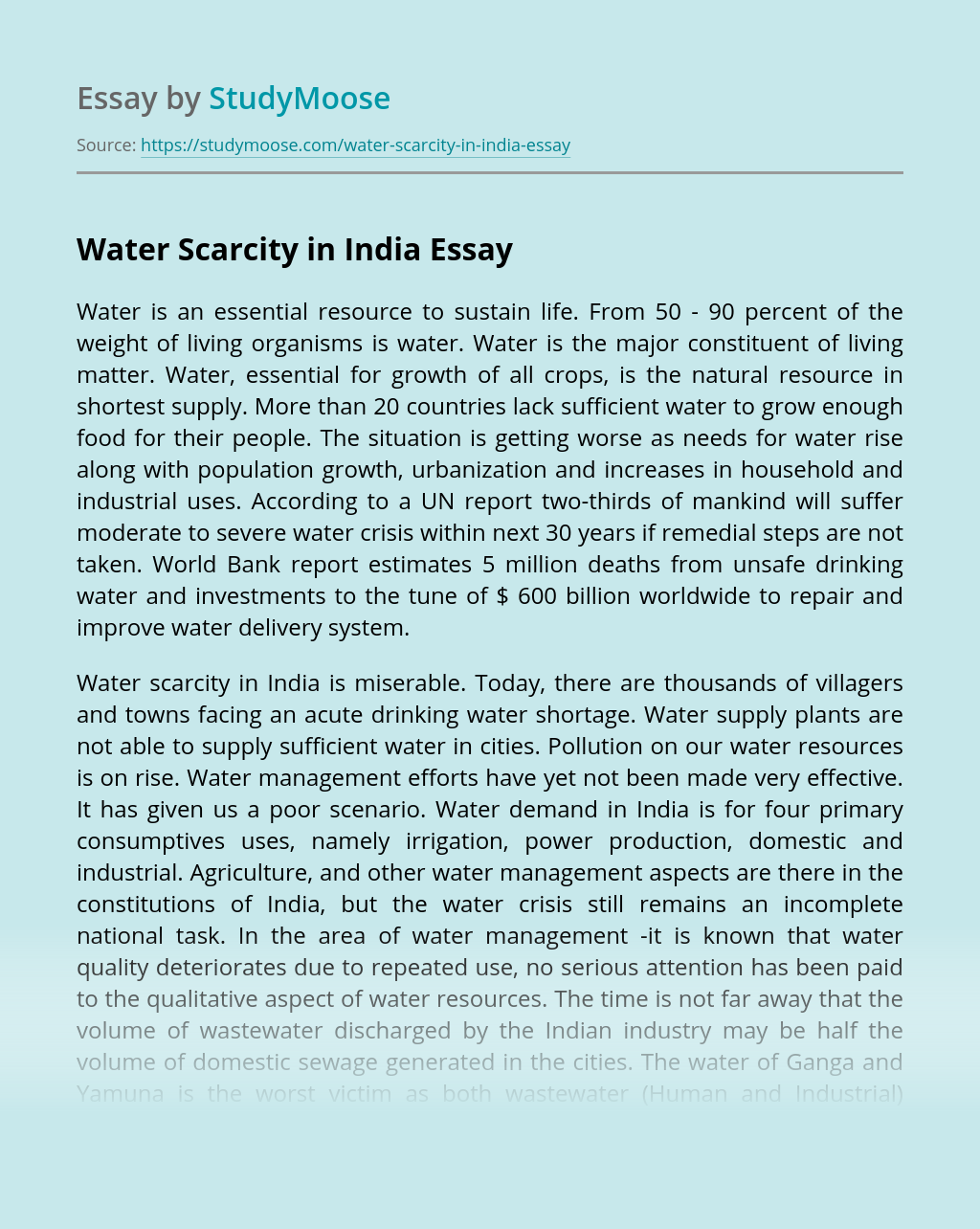