Environmental Issue: How to Reduce Fresh Water Scarcity in a Country?

In this report, I am going to investigate the reason why there is a water shortage existing in Japan. I am a Japanese hydrologist who are finding methods to reduce the shortage of fresh water. I did many researches about the fresh water in Japan.

Don't use plagiarized sources. Get your custom essay on
“ Environmental Issue: How to Reduce Fresh Water Scarcity in a Country? ”
Get custom paper
NEW! smart matching with writer

I find the background information about fresh water in Japan, including the precipitation in Japan. Fresh water is not enough for Japanese to use. By evaluating the data and the information I searched, I find that there are some useful methods to decrease the shortage of fresh water in Japan. I make some hypothesis and use the data I found to discuss whether it is helpful. In the end of the report, I make some possibilities of being success by using my hypothesis.

The objective of this report is finding approach to reduce the shortage of fresh water in Japan. When finding the relevant data, I find some accurate information about the fresh water resources in Japan because this data is recorded by scientists.

Fresh water is significant to both human and local biome. There is an old saying goes, water is the source of life, there is no life without water. No matter the human beings and other alive things need water to absorb nutrients. People can live without food for many days but they cannot live without water. If fresh water cannot be utilized properly, all of the living things will die in the future. In addition, water plays an important role in the natural world.

Water is a necessary part in the recycle systems.

All of the systems have to utilize water. If aquatic ecosystems are wrong, then it will cause many severe problems, including weather problem. Then the whole systems will crash. Nowadays, many underground constructions are badly influenced the environment, including water supply and water chemistry. Toxic substances are polluting the fresh water. In this case, human can only get limited fresh water. The function of the water is providing oxygen and nutrients, containing metabolic wastes of breeding objects, spreading disease poisons, dissolving and dispersing drugs.

The method I choose is that colleting the information of fresh water in Japan and the population number in Japan. By doing this, I can clearly find the ratio of water can be used for each person. I know Japanese utilize the water from rain. They always pure the rain to get fresh water to use. All of the data and the information I find online are from academic and professional websites, which are suitable for my academic study because these information and data will be highly accurate and realistic.

Some areas in Japan are poor in water. On the contrary, some areas will be severely affected by floods caused by typhoons and rainstorms. All of these disasters will pollute fresh water because silt will deposit. Since the beginning of heian period more than 1,000 years ago, that is, the era when masters of Buddhism were in the open sea, the four countries have built many reservoirs to cope with water shortage. Although it is rainy in this region, the rainfall changes greatly throughout the year. Therefore, in order to realize the stable supply and utilization of water resources, measures such as the construction of reservoirs and dams have been taken to develop and stabilize the supply of water resources. The scale was relatively small before the Edo period, and large-scale construction began after the Meiji period.

In addition, Japan has the problem that large-scale earthquakes, typhoons and other large-scale disasters occur almost every year. Disasters will cause water intake and drainage facilities and water purification facilities to stop operating and large-scale water cut-off will occur, seriously affecting the lives and economic activities of the citizens.

In addition to natural conditions, the shortage of water resources in these areas is mainly restricted by social and economic conditions such as population and industrial distribution. What is more, Japan also set up many principles, including Technical guidelines for water recycling in sewage treatment. Also, at present, two-pipe water supply systems have been widely formed in major Japanese cities. One is drinking water system, and the other is reclaimed water system, i.e. reclaimed water channel system. Reclaimed waterways are famous for transporting reclaimed water for miscellaneous uses, accounting for about 40% of the reclaimed water consumption. Japan’s reclaimed water is mainly used for urban miscellaneous uses, industrial and agricultural irrigation, and seepage recharge to supplement groundwater. According to this information and the data, my hypothesis can be relevant.

I suggest that Japan can find a method to make seawater into fresh water. If this method can be utilized in the future, I believe the quantity of fresh water can be greatly increased.

Environmental Issue: How to Reduce Fresh Water Scarcity in a Country?. (2021, Jun 20). Retrieved from http://studymoose.com/environmental-issue-how-to-reduce-fresh-water-scarcity-in-a-country-essay 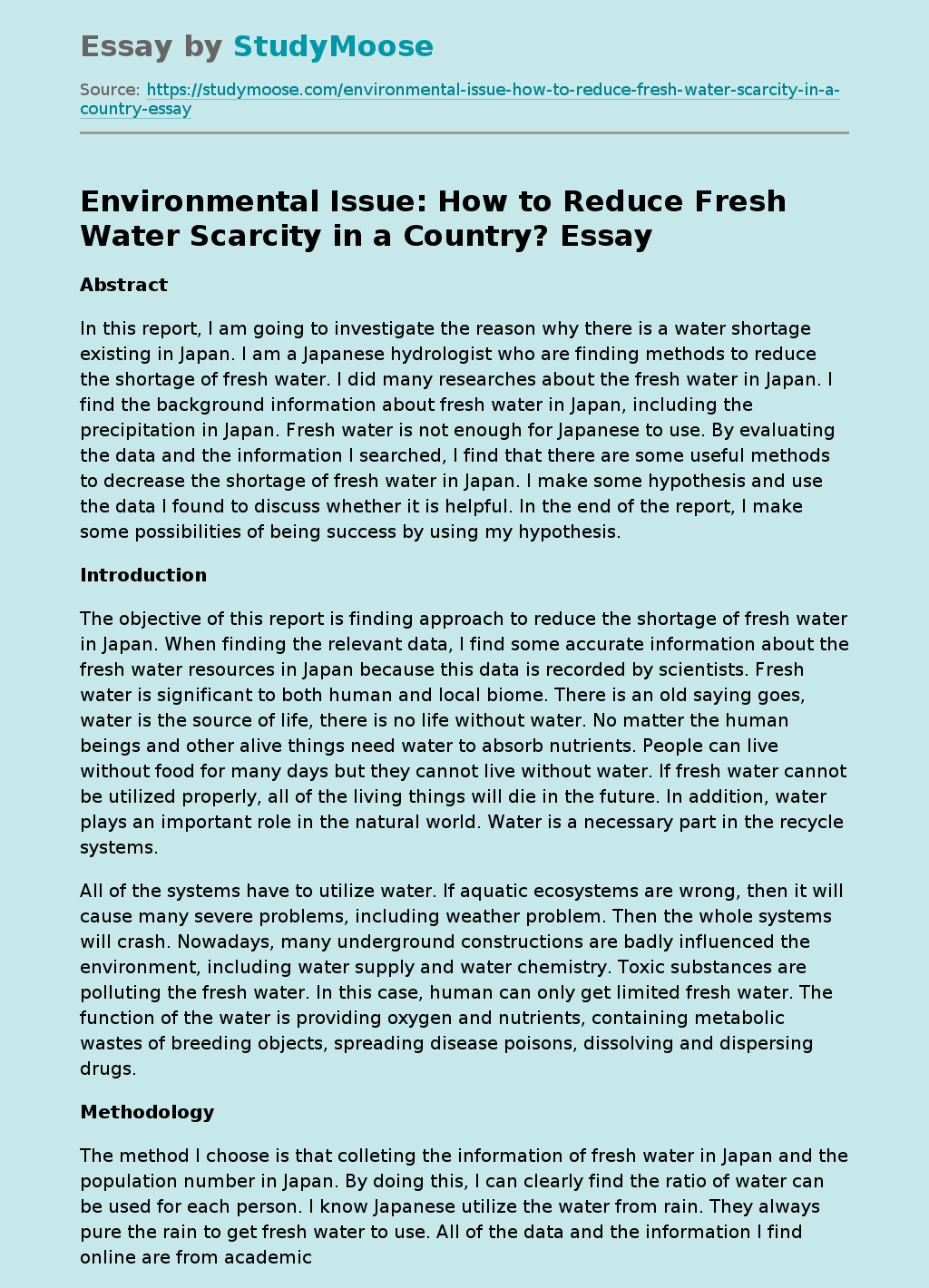