The desperate need to be moral within society contributes to the motivations, choices, and actions made by people everyday.  It is society which defines what morality is and applies the necessary pressure to force individuals to conform.  Often, failing under these societal pressures, individuals are forced to use deception to escape the oppressive nature of their society.  Oscar Wilde, in The Importance of Being Earnest and Christopher Marlowe, in Dr. Faustus, venture into nature of society and how it effects the individuals within that society.

Don't use plagiarized sources. Get your custom essay on
“ Deception as a Symptom of a Corrupt Society in Marlowe and Wilde ”
Get custom paper
NEW! smart matching with writer

Marlowe and Wilde assert that  deception is a symptom of a corrupt society not a character flaw.

The plot of The Importance of Being Earnest centers around deception.  Algernon is a wealth bachelor that lives in London.  He often pretends to have a friend Bunbury who is sick and lives in the country.  Whenever Algernon wishes to escape certain social “duties” he is explains that he simply can no because he has to visit his sick friend.

He can then escape and enjoy the pleasures that Victorian society called improper.  However, his friend, Bunbury, does not exist.  Through this form of deception Algernon not only gets pity from his friends he also has the perfect excuse to do whatever he wants. Algernon’s believes his best friend is named Ernest.  Ernest is actually John Worthing.

Look more: satire in the importance of being earnest essay

John Worthing is  also using deception to escape his restrictive and boring existence.  He tells his friends that he has a wayward brother who lives in London and is often in trouble.

Therefore he must go to London to bail his brother out.  When John is in London he goes by the name of Ernest.  He pretends to be a good man in country only to be a “bad”man in the city. John wants to marry Gwendolen, but she wants to marry a man named Ernest.  When she meets John using the name Ernest she falls deeply in love with him.  Gwen’s aunt insists on knowing his family background and he is forced to reveal that is real parents left him at a train station and he was adopted by a rich upstanding Victorian family.

Algernon has the idea that he will go into the country to visit John and pretend to be Ernest.  He is unaware that John has given up his city life and has planned the tragic (but unreal) death of his brother.  Deception plays a vital role in this play.  If John and Algernon did not lie there would be no play.  If each character followed the Victorians standards of society, there would be no plot.  While this play is a comedy,  Wilde’s point is clear: only through deception can people exist in Victorian society.  If they did not use deception everyone would surely die from boredom and the suffocating grasp of society.

Similarly, Marlowe’s Dr. Faustus  is based on deception. Dr. Faustus begins with Dr. Faustus looking for his true self.  He wants to figure out who he is.  He possesses all the supposed quality of a man of the renaissance.  He is intelligent, well educated, and has come to a point in his life where he must realize who he truly is.  This type of man is ambitious and driven.  However, as he becomes more and more powerful, he losses his humanity through the use of his power for deception.

The societies in Importance of Being Earnest and Dr. Faustus are both portrayed as corrupt.  In “Dr. Faustus” the Renaissance court is the representative evil society.  It is a toxic environment that breeds blind ambition, betrayal, and evil.  Seeking the highest form of knowledge, he arrives at theology and opens the Bible to the New Testament, where he quotes from Romans and the first book of John. He reads that “[t]he reward of sin is death,” and that “[i]f we say we that we have no sin, / We deceive ourselves, and there’s no truth in us.” The logic of these quotations—everyone sins, and sin leads to death—makes it seem as though Christianity can promise only death, which leads Faustus to give in to the fatalistic “What will be, shall be! Divinity, adieu!”

However, Faustus neglects to read the very next line in John, which states, “If we confess our sins, [God] is faithful and just to forgive us our sins, and to cleanse us from all unrighteousness” (1 John 1:9). By ignoring this passage, Faustus ignores the possibility of redemption, just as he ignores it throughout the play.  Similarly, Wilde finds Victorian society equally as corrupt.  In The Importance of Being Earnest he uses the character of Lady Bracknell to symbolize Victorian society.  She represents “earnestness” which is demanded within her society as well as the discontent that it breeds.  She is dominating, conceited, bitter, frigid, and extremely proper.  It is through Lady Bracknell that the Victorian standards in regards to marriage, religion, money, respectability, and society are revealed.

Lady Bracknell comments “I do not approve of anything that tampers with natural ignorance … touch it and the bloom is gone…whole theory of modern education is radically unsound…education produces no effect … it would prove a serious danger to the upper classes” (Wilde Act II)   The Renaissance is used by Marlowe as an ever present influence which causes the each of the characters within in Dr. Faustus to use deception to survive.  The cruel and unforgiving nature of Victorian society is equally as influential causing the characters of Importance of Being Earnest to use deception to acquire socially desirable things.

Dr. Faustus and Jack are both individuals which are forced by society to deceive their family and friends.  Dr. Faustus,  is a bright young man with many talents.  Dr. Faustus is an educated man. He is not only educated he has a great wisdom.  This wisdom was not earned.  Dr. Faustus makes a deal with the devil to get more knowledge.  He thought that the god of the underworld could make all the knowledge past, present, and future to him.

This is when the first deception happens.  Dr.  Faustus makes himself believe that there is no underworld and no circles of hell.   This is the second deception.  He forces himself to believe in the Elysian Fields which is a place where good people go and once there, if they were good enough, they were given the gift to live forever.  He believed he was a good person and would spend the rest of life, after death, with the greatest and more moral people that ever lived.  Faustus even asks Mephistopheles “What is Hell?” The answer should have caused Faustus to shiver and turn to the God he had renounced:

Why this is hell, nor am I out of it.

Thinks’t thou that I, who saw the face of

am not tormented with ten thousand hells

in being deprived of everlasting bliss! O

which strike terror to my fainting soul.

Wilde’s Jack Worthing is is equally effected by his society.  Jack lives two lives and both are false.  In the country he remains a respectable and upstanding upper class man who is miserable.    However, he leads a secret life in the city which brings him both pleasure and inner disgrace.  Jack comments “When one is in town one amuses oneself. When one is in the country one amuses other people” (Wilde Act I). He lies to his friends and recounts stories of his invented brother Ernest who is always getting into trouble.  Jack uses Ernest as his excuse to go into the city and find a few moments of happiness.  It is only through deception that Jack can find happiness within the restrictive Victorian society.   Jack’s real family is not of the upper class.

His current position in society is only through his adoptive family and his adoptive father’s money.  Jack knows, understand, and pretends to conform to crushing societal norms.  Even his name, Worthing, is reminds the audience to question – is he really worthy?  Jack wishes to marry Gwendolen not because of any great and deep love.  He knows that through marriage to a woman of an affluent family that he can gain respectability and fully belong in the society he longs to be in.

Due to this societal pressures he is willing to do whatever it takes to make the marriage happen.  When confronted with his deception he admits “it is very painful for me to be forced to speak the truth. It is the first time in my life that I have ever been reduced to such a painful position, and I am really quite inexperienced in doing anything of the kind” (Importance Act II).  Dr. Faustus and Jack are both victims of corrupt societies which contribute to their deceptive behavior.

Wilde and Marlowe both examine the effect of a crippling society on the character and morality of it’s citizens. Wilde asserts that the restrictive nature of Victorian society caused Jack and Algernon to employ deceptive choices in their lives escape the discontent of a proper society.  If Jack lived in a more liberal and understanding society he would be able to honestly pursue the activities which make him happy.  Marlowe pre-dates Wilde’s point of view.  He intricately details in Dr. Faustus, how the devil and all men can be tempted and utilize deception to survive.  If Dr. Faustus did not exist in a corrupt society he would have not been corrupted himself.

Each play offers a mirror through which the brutal tendencies of society and weakness of human nature are reflected for the reader.  The condition of society is easily reflected in the character and actions of members of that society.  Societies use fear of cruel punishment (especially social outcasting) to encourage and direct the behavior of people within that society.  As members of this society we become immune and blind to the influence of these forces and conform without question.

Deception as a Symptom of a Corrupt Society in Marlowe and Wilde. (2017, Mar 01). Retrieved from https://studymoose.com/re-deception-as-a-symptom-of-a-corrupt-society-in-marlowe-and-wilde-essay 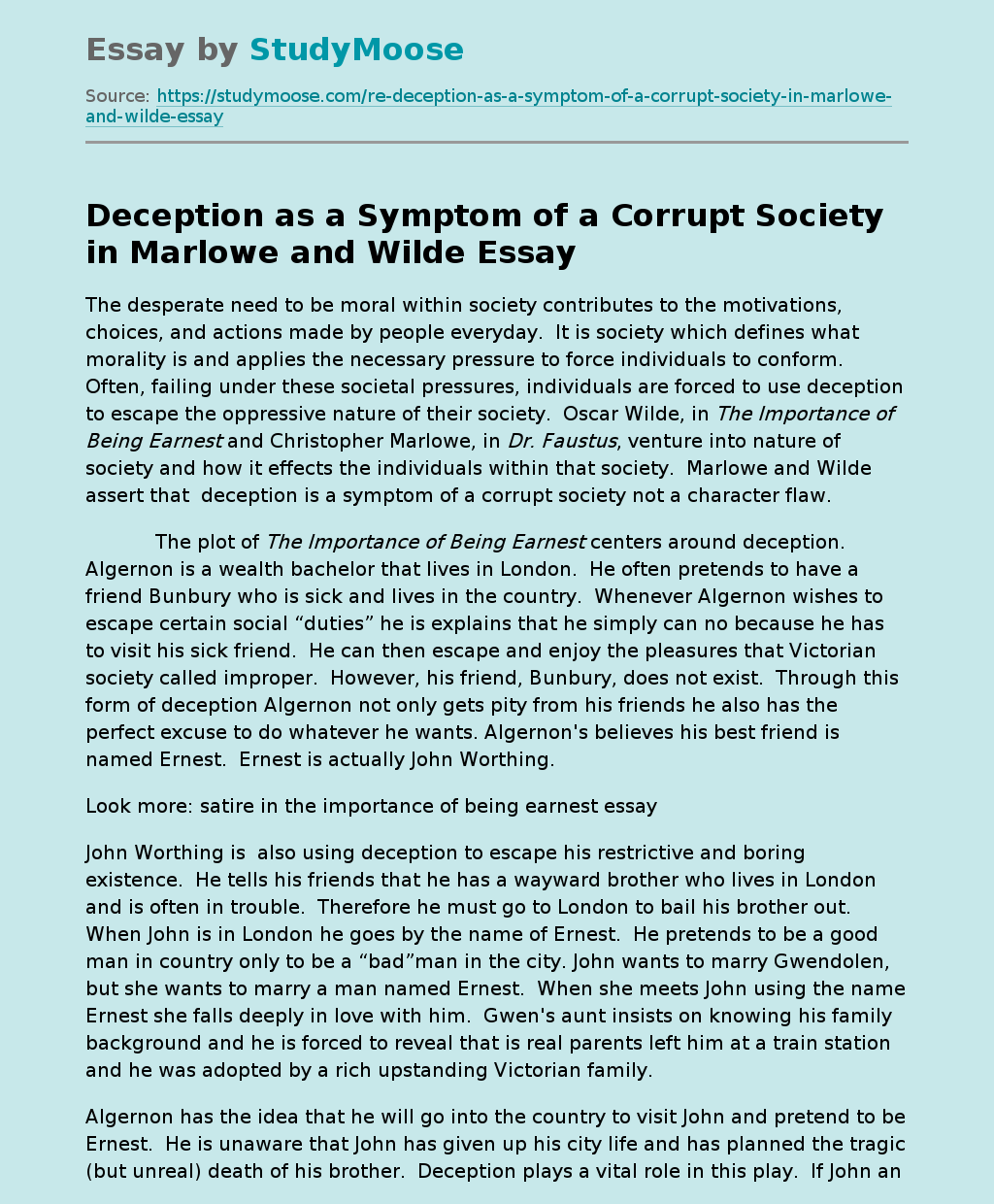