UNESCO’s declaration of 21st February as the International Mother Language Day has brought fresh glory and prestige to Bangladesh which is making significant strides towards peace, progress and prosperity at home and discharging international obligations abroad. After 1952, the people of Bangladesh have been observing every year the 21st day of February as their glorious and unforgettable Language Martyrs Day. What happened on 21st February 1952 is widely known. Still let us very briefly recount the fateful happenings of that day and the circumstances that led to and followed them.

Turn in your highest-quality paper
Get a qualified writer to help you with
“ International Mother Language Day ”
Get high-quality paper
NEW! AI matching with writer

In August 1947, a new state called Pakistan, comprising two far-flung wings in the west and east, separated by 1600 kilometers of foreign territory, emerged on the world map. The ideological basis of that strange phenomenon was the absurd and pernicious two nation theory of Mr. Jinnah that ignored such basic elements as language and culture and considered religion as a bond strong and sufficient enough to transform a people into a nation.

The language of the people of eastern wing of Pakistan, and they were the majority, was Bangla.

It had a rich tradition of literature of over a thousand years. The Bangalees also had a highly developed culture that had little in common with the culture of the people of western wing of Pakistan. The Bangalees love for and attachment to their language and culture were great and when in 1952 the neo-colonial, power-hungry, arrogant rulers of Pakistan declared that ‘Urdu and Urdu alone would be the state language of Pakistan, they sowed the seed of its future disintegration.

The government decided to quell protests by brute force. The police opened fire on 21st February 1952 on unarmed peaceful protesters, most of whom were students, resulting in the death, among others, of Rafiq, Barkat, Jabbar and Salam. As the news of those deaths spread, the entire people of the eastern wing felt greatly involved emotionally. Those who lost their lives to uphold the prestige defend the rights of their mother-language became hallowed martyrs.

[Barkat] [Rafiq] [Saifur]
Their sacrifice at once tragic glorious and the indignation of the people against an autocratic government had far reaching effect. 21st February became a symbol and attained mythic properties, it nourished the concepts of democracy and secularism. It also contributed significantly to the flowering of Bangalee nationalism. It led to the dawning of the realization in the minds of the Bangalees that they constituted a separate nation and their destiny lay not with Pakistan but elsewhere as an independent country. The subsequent democratic mass movements of the late fifties, throughout the sixties and the seventies, and finally the struggle for independence and the war of liberation owed a great deal to 21st February.

The declaration made by the UNESCO in November 1999 designating 21st February as the International Mother Language Day has placed Bangladesh on the cultural map of the world with a highly positive image. We, people of Bangladesh, should now do all that we can to further develop our mother language Bangla in all branches of knowledge so that it can play a worthy role in the community of world languages. We shall love, cherish and promote Bangla, our own mother language, but we shall not indulged in any kind of chauvinism. 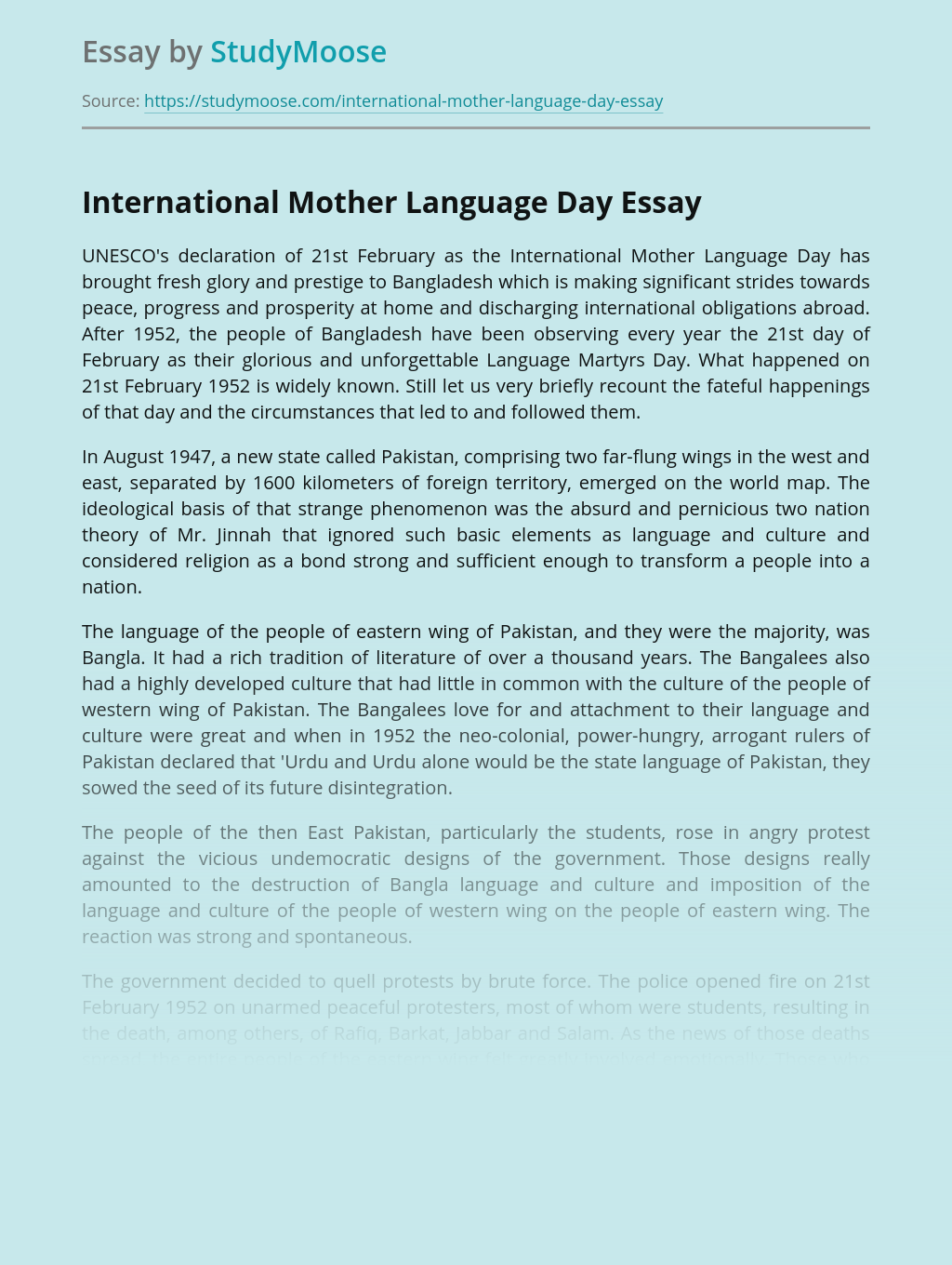 Turn in your highest-quality paper
Get a qualified writer to help you with
“ International Mother Language Day ”
Get high-quality paper
Helping students since 2015
Stay Safe, Stay Original