Introduction: We are very proud because the UNESCO gas declared the 21st February as the International Mother Language Day.

Don't use plagiarized sources.
Get Your Custom Essay on The International Mother Language Day Just from $13,9/Page

It is such a prestige that we cannot find the right words to express our sense of jubilation.

How it happened: The 21st February, our Martyr’s Day, is unique in the history of the world in the sense that in no other country have lost lives and suffered for the preservation of the mother tongue. So judging the significance of the language movement, the UNESCO, has considered it a matter of pride to declare the 21st February as the International Mother Language Day.

The Impact in Bangladesh: The impact of this glorious decision is huge in Bangladesh. The political parties and the student community started celebrating the occasion in the streets as soon as the news came to them.

World Languages: There are about 4000 official languages in the world.

Bangladesh is the mother tongue of about 22crores of people. English, French, Spanish, Chinese and Arabic are some of the most dominant languages in the world. But, in spite of this, Bengali has come to the top position because through it mow all other languages have assumed their true status.

Conclusion: On the International Mother Language Day our vow will be to improve our language so that world. The constructions of sentences and the spelling patterns should be modernized. We should develop multi-lateral schemes to make Bengali a language easy to learn by foreigners.

Introduction: Education is compared to light. It dispels the curse of ignorance. It brings out all round development of the body and mind. Everyone has a right of education. It is his fundamental right.

Mass education: Giving education to the illiterate mass is called mass education. No nation can prosper by keeping her vast majority in the abyss of ignorance. Mass education makes people conscious of their right and duties. It helps them to become good citizens. It makes them patriots. During the British and Pakistani rule no steps were taken in this direction. Now we are a free country. It is now time for us to education our illiterate masses for the overall development of the country. It will be a curse for us if we keep our 80% people in the dark.

Government’s effort: Our government is aware of this national problem. It is making sincere efforts to solve this problem. It has made Primary Education compulsory for children. The Radio and the Television are also making programmes every day for this purpose. Our duties: We should help the government in making the mass literacy programme a success; Night school should be opened in every village on government and private initiative Unemployed educated youths may be engaged for this on giving them a subsistence allowance. The poor students of the night schools should be given reading and writing materials free of cost. They may be given some extra facilities to ensure regular attendance.

Local teachers and students can be used: The government can use the teachers of the local schools. College and madrasah to organize this campaign. Imams of the mosques and the students after their final examinations can be engaged for this. We must remember that this is gigantic task Co-operation from all quarters is essential to make it a success.

Conclusion: Our government has given top priority to education. It has allocated a huge amount for education in the national budget. It has also given a greater stress on mass literacy programmes and on compulsory education. We are hopeful that if bold step is taken and the co-operation of all is got from all quarters the curse of illiteracy will in no time be eradicated from Bangladesh. 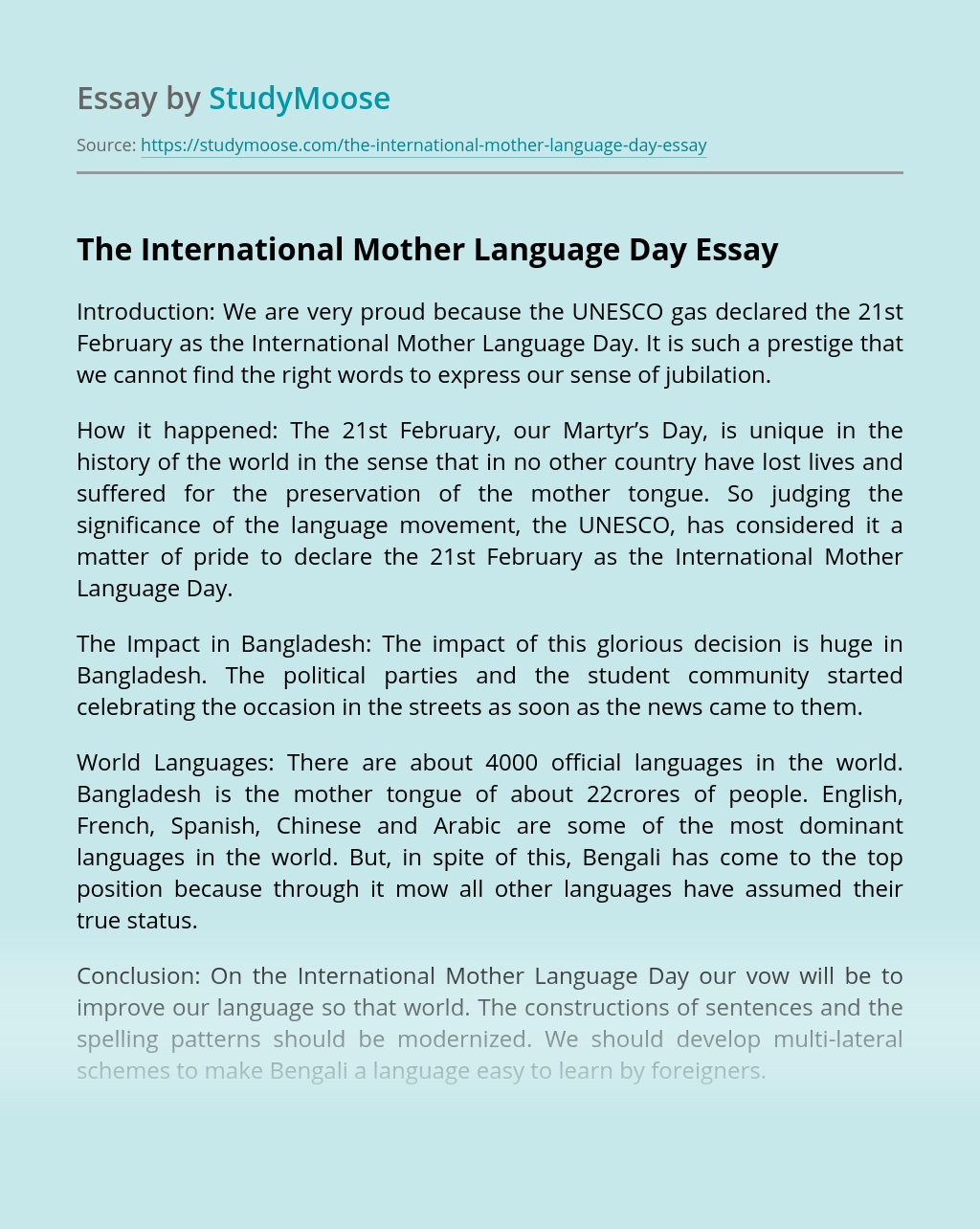 A few days ago, while I was returning to Dhaka from Comilla, one of my friends called me in my mobile and wanted to know where I was. Right on that time I was in Kaanchpur Bridge. I told him that I was in Comilla. The thing is that was not untrue in the sense...

Get Essay
Bangladesh and Rohingha Issue

The Rohingya whom the BBC calls “ one of the world’s most persecuted minority groups”,are an ethnic, linguistic and Muslim people who reside in the Rakhine (historically known as Arakan) State , a geographically isolated area in western Burma, bordering Bangladesh. [1]They are related to the Indo-Aryan people of India and Bangladesh. As of 2012,...

UNESCO’s declaration of 21st February as the International Mother Language Day has brought fresh glory and prestige to Bangladesh which is making significant strides towards peace, progress and prosperity at home and discharging international obligations abroad. After 1952, the people of Bangladesh have been observing every year the 21st day of February as their glorious...

Hometown is the city or town where one grows up, or the place of one’s principal residence.It is a place where one passes the lion’s share of his lifetime in the midst of peace, tranquility and joy. It is not required to be the birthplace, although the two can be the same place. The name...