Instances of Free Will in Antigone by Sophocles

Free will is a gift given to man to remain in control of their lives; our fate and destiny are determined by our free will and the decisions we make. In the play Antigone, written by Sophocles Antigone demonstrates her free will when she decides to bury her brother, directly defying Creon’s law. As a result of this defiance her fate was suicide.

The choice she made functions as a exercise of free will because she considered the consequences and defied Creon anyway, that defiance sealed her fate.

Turn in your highest-quality paper
Get a qualified writer to help you with
“ Instances of Free Will in Antigone by Sophocles ”
Get high-quality paper
NEW! AI matching with writer

Antigone clearly controlled her fate through free will. However this is not always the case in A day in the life of Ivan Denisovich written by Alexandr Solzhenistyn, Ivan has little to no free will because he does not make his own choices, his fate is controlled by others.

Acting with free will is to satisfy the requirements of being responsible for one’s actions. Antigone bury’s her brother Polyneices because she believes it is her Moral duty to do so, as he is her brother and everyone deserves a proper burial. Antigone’s free will is to act upon this moral responsibility in which she feels she is obligated to do.

Our fate is not determined by us but a much more powerful force. Fate “is an inevitable and often adverse outcome, condition, or end.

” According to the Webster dictionary. In the book A day in the life of Ivan Denisovich Ivan’s fate is inevitable, he is no longer in control of his life after being sentenced to 10 years in the Soviet Gulag system. In the camp Ivan is forced to live under very strict rule and if he disobeys the regulations he can be killed. Clearly Ivan has no control over his life and is forced to live a certain way in order to stay alive.

Antigony goes against Creon’s law that forbade anyone to bury polyneices, her brother. Breaking of Creon’s law will result in death. Knowing the consequences Antigone bury’s her brother regardless, having guard over his body. Antigone was caught burying Polyneices and brought to Creon where she faced death. Antigone made the decision to bury her brother.

This act was not forced upon her by anyone but her own morals. She determined her fate through free will. Though she knew the consequences she made the decision that she did which sealed her fate, because she knew she would die if she buried her brother. Antigone would rather die than not let her brother be buried. “And if I have to die for this pure crime,/ I am content, for I shall rest beside him;/ His love will answer mine” (lines 72-74). This quote demonstrates how Antigone makes the decision that she does knowing she will die.

She is content with the idea of dying if it means her brother will get a proper burial. Antigone is pursuing her fate by burying her brother. Antigone is not looking at it as death she has a different approach to things than others, for example her sister. This approach makes her fearless, she does not see dying necessarily as a bad thing but simply the price she will pay for burying her brother. This fearlessness in her makes it so she can confidently make the decision that she does, excepting the fact that it will result to her death.

Not only does Antigone decide her fate by burying her brother but she also chooses when and how she dies. Creon had planned to kill her anyway, but with her own free will she pursues her death in the fashion that she so chooses. Antigone hangs herself with the red and gold cord of her robe. Her decision to do this is her own free will.

Antigone could have ignored this option and let her fate control how she dies, by either being stoned, or perhaps Creon deciding to set her free. We will never know what Antigone’s fate would have been if she did not kill herself, she deprived us of what could have happened by making her own rash decision. Antigone believes she has the right to live the way she wants, she is controlling her fate by deciding how she dies.

A contrasting example comes from the book A day in the life of Ivan Denisovich. The main character Ivan does not have free will. Ivan was charged with being a German spy and therefore sentenced to 10 years in the Gulag. Ivan knows he is not a German spy, however he has no control over his sentencing and is forced to serve the 10 years. Ivan no longer controls how he lives, he lives by a strict life style created by the guards of the camp. “In camp the squad leader is everything: a good one will give you a second life; a bad one will put you in your coffin.” (pg. 36).

This quote illustrates how much Ivan and other prisoners lives are determined for them. He says that your squad leader determines weather or not you live. In these camps life were cruel not only because of harsh conditions but the fact that others determined your fate, whether you lived or died. Theses prisoners have very little control over their own life, they no longer worry about simple decisions, the concerns of the prisoners is who will be the one to decide their fate.

Even though, the prisoners destiny is pre-determined based upon the harsh circumstances they are forced to live by, they can still make small unnoticeable decisions to maintain sanity in their life. These small choices they make are their free will. For instance, Ivan takes his hat off every time he eats a meal despite the fact that it is below freezing. Ivan has always removes his hat before eating long before he was sentenced to the Gulag, he feels he must continue this tradition as a sign of respect. Ivan is making this small decision on his own in a place that is filled with decisions that are made for you.

Ivan wants to keep the little dignity he has left and by doing so he takes off his hat when he eats. This represents that no matter how confined a human is they will still find ways to pursue their own lifestyle. Ivan find this morally just to take off his hat when he eats, he is making that decision based off of free will. Because he makes this decision it greatly affects Ivan’s attitude towards things, because this small tradtion shows he has taken a piece of his ordinary life and continued that practice in somewhere as horrible as the Gulag. Ivan’s free will is to be able to take his hat off when eating.

Finally, this essay shows how in the play Antigone and the book A day in the life of Ivan Denisovich, both of the main characters in these two pieces of literature find ways to control their fate. In Antigones case she bury’s her brother, for she believes that it is her moral responsibility. Ivan takes control over his free will by taking off his hat when he eats. Antigone’s fate is determined by her free will to defy Creon. Ivan is not in control of his own fate, therefore he must find small ways to remain in control as much as possible of his life.

Instances of Free Will in Antigone by Sophocles. (2016, Nov 09). Retrieved from https://studymoose.com/instances-of-free-will-in-antigone-by-sophocles-essay 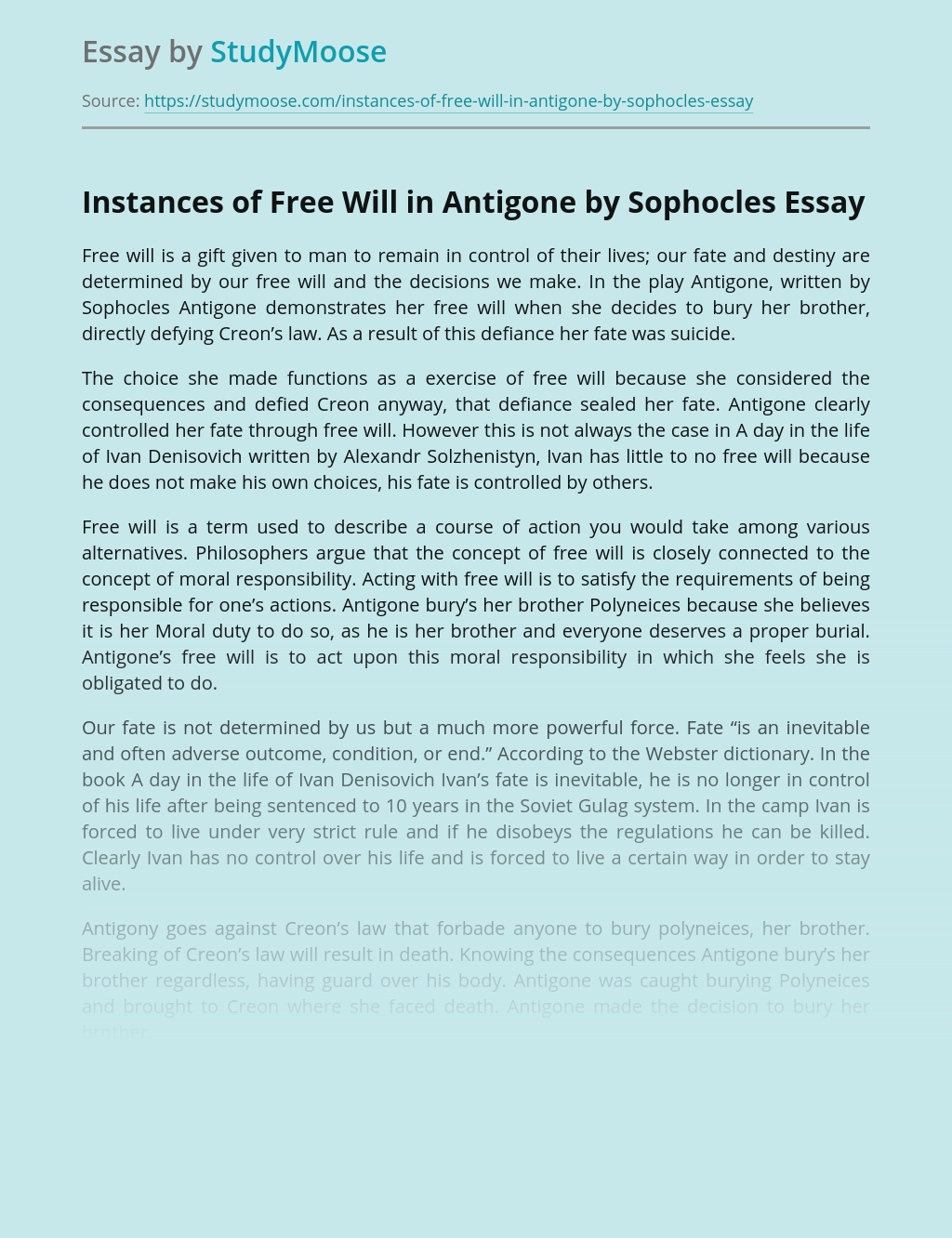 Turn in your highest-quality paper
Get a qualified writer to help you with
“ Instances of Free Will in Antigone by Sophocles ”
Get high-quality paper
Helping students since 2015
Stay Safe, Stay Original