Indentured Servants in the Chesapeake Colonies

The life of the indentured servant was at best hazardous and full of pitfalls. There was not one sole factor that would determine the life success or failure of this class of people, but a instead it was determined be a series of random qualities and experiences. For example, as we will see with John Harrower, men who were strong and educated had a much better chance of surviving being indentured than a man who was weak in health or had no formal education.

Don't use plagiarized sources. Get your custom essay on
“ Indentured Servants in the Chesapeake Colonies ”
Get custom paper
NEW! smart matching with writer

As we will see with Elizabeth Sprigs, women were treated with little or no respect, and they were generally subjugated to a hard and grueling service. Status, education, gender, and health were key factors in how lucrative the life of the indentured servant would be, but these would only come in to effect if you made it across the sea in a grueling seven to eight week journey. Life as an indentured servant was hard, but so was life in a poverty stricken Europe.

Europeans from all over the continent were starving and looking for food.

Family men were looking for ways to provide for their family and to escape an oppressive government that provided little in the answers for the common man and woman. The prospect of being indentured was sold to the people as a utopia to remove themselves from their present misery and hardships. Indentured servant hood had positive attributes for both the government and the common man. For the government, an overstressed system was seeing relief as thousands of people sold themselves into labor in the new colonies.

For the people, the promise of a new and better life was presented to them in exchange for a couple of years of service. However, was this labor arraignment truly beneficial to the poor emigrants who indentured themselves to the ship captains for passage to America? The question is an important one, but it is one that doesn’t need to be asked if the person never actually makes it to America. Gollich Mitttelberger noted in a letter to his father the deplorable conditions that accompanied his voyage to America.

Mittelberger states, “But even with the best wind the voyage lasts 7 weeks. On board there is terrible misery, stench, fumes, horror, vomiting, many kinds of sea sickness, fever, dysentery, headaches, heat, constipation, boils, scurvy, cancer, mouth-rot, and the like which comes from the spoiled food and foul water that they are forced to consume (Document 6, page 18). ” Mittelberger went on to say that he missed his poverty stricken home and wished to return. He talked about how the ships were so overcrowded, that live children were thrown overboard when their mother would die.

He recanted once that, “One day a women who was about to give birth and could not give birth under the circumstances, was pushed through a port hole in the ship and was dropped to the sea, because she was far in the rear of the ship and could not be brought forward (Document 6, page 19). ” The letter was ended by telling his father that the horrors of the trip did not end once they arrived in America. Those who could not pay for their passage were held to be sold. They were not allowed off the ship until they had been purchased and could be escorted by the purchaser.

Mittelberger noted that the sick suffered the most because they were chosen last, after the healthy ones had been purchased. Once an indentured servant arrived and had been purchased, there life rarely improved. In a letter from Elizabeth Sprigs to her father, she begs for him to forgive her and to send her clothes. She explains that her life is hard and that she is worked hard day and night. When they complain, they are whipped. She tells her father that their diet in is restricted to Indian corn and salt.

Elizabeth begs her father, “We are almost naked, neither shoes nor a stocking to wear, and what rest we get is a blanket and some ground to lie upon (Document 5, page 17). ” She goes on to plead for forgiveness from her father, and for him to send her some relief. This is in contrast to the story of John Harrower. John Harrower is both educated and seems to have a variety of connections. John uses his education to acquire work as a school master for a private family. His journal entries are of a more common experience of looking for work. Harrower came in search of becoming a book keeper.

His journal follows him until he is offered the position as a school master, and he is encouraged to accept it because it is with a private family. His experience is very different and could go a long way in supporting the outrageous claims of George Alsop. George Alsop, in a book published in the Americas regaled would be indentured servants with tales of how wonderful their experience would be. He stated, “Now those that commit themselves to the care of the Merchant to carry them over, they need not trouble themselves with any inquisitive search touching their voyage; for there is such honest care and provision made… (Document 6, page 6).

This is a drastic different statement than Mittelberger made about the horrible conditions caused by overcrowding and the consumption of rotten food and foul water. Alsop goes on to say, “The women that go over into this Province as Servants, have the best luck here as in any place of the world; for they are no sooner on shore, but they are courted into a Copulative Matrimony, for some of them… (Document 6, page 7). ” This again contrasts greatly with Mittelberger who wrote about the women who were being thrown overboard because they were having complications with child birth.

This also contrasts with Elizabeth Sprigs who wrote about being whipped for complaining, and given nothing to eat but Indian corn and salt. Alsop was obviously using false claims to help ensure that the cheap labor would flow steadily into the American Colonies. In July of 1640, there is an account of some indentured servants that are caught trying plot their escape. The courts decided that this was dangerous grounds, the men were whipped severely, and had the letter R burned into the side of their face.

They suffered other abuses before being given back to the master (Document 8, page 23). ” The life of the indentured servant was hard, and did little good to better the life the people involved. The conditions in which many were forced to work in were sub-human, and they were generally treated no better than animals. While there were no doubt a select few that profited from this, on the average this labor arrangement did not benefit the poor emigrants who came over from Europe looking for a better life.

Indentured Servants in the Chesapeake Colonies. (2016, Sep 25). Retrieved from http://studymoose.com/indentured-servants-in-the-chesapeake-colonies-essay 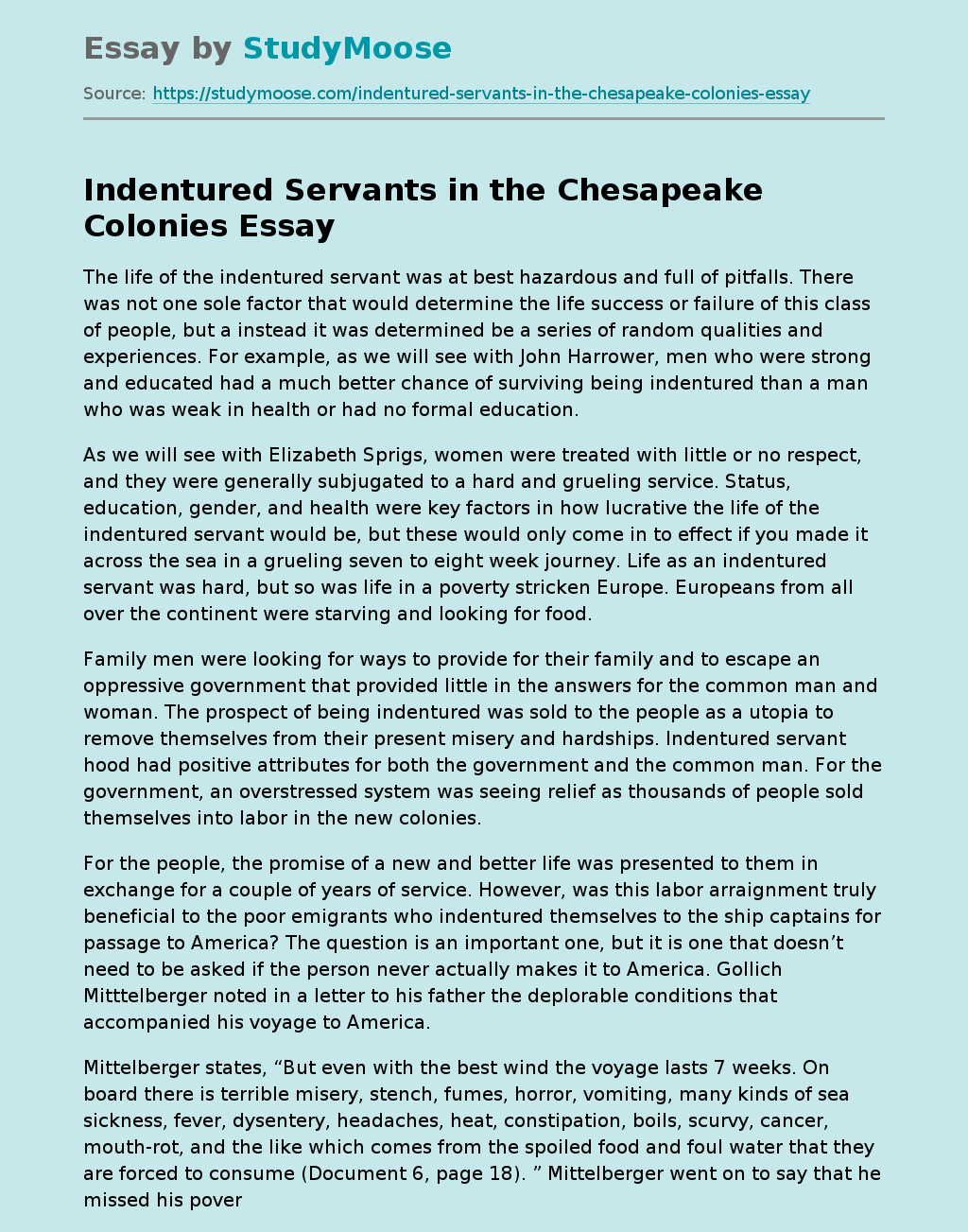