Between the settlement at Jamestown in 1607 and the Treaty of Paris in 1763, the most important change that occurred in the colonies was the extension of British ideals far beyond the practice in England itself. Changes in religion, economics, politics, and social structures illustrate this Americanization of the transplanted Europeans.

By 1736, although some colonies still maintained established churches, other colonies had accomplished a virtual revolution for religious toleration and separation from Church and state. In England, the Anglican Church was dominated and the other churches were suppressed.

Don't use plagiarized sources. Get your custom essay on
“ American colonies in 1763 – A new Society? ”
Get custom paper
NEW! smart matching with writer

However, in colonial America, people tried to separate the church and state. One of the examples is Roger Williams, who attacked theocracy in New England. He wanted the church to be separated from the state. He was banished from the Massachusetts Bay and he built a new colony, Rhode Island with religious freedom. The other example would be the Maryland Toleration Act in which, all kind of people with different faiths could live in Maryland.

The other colonies such as Pennsylvania, New York, and Carolina all had ethnically and religiously diverse populations.

In a similar economic revolution, the colonies outgrew mercantile relationship with the mother country and developed an expanding capitalist system of their own. In 1660 and 1663, England passed the Navigation Acts to monopolize the trade of the English colonies. The colonies produced far more than England needed but they were not allowed to sell to other countries. Rather, England would acquire the extra products and sell them to other European countries for their own profits, which was not fair.

American colonists worked very hard, they harvested the land, and sea, did manufacturing and commerce, industrialization, and plantation agriculture. Despite all of the injustices of England, their economy grew twice as fast as it did in England.

Building on English foundations of political liberty, the colonists extended the concepts of liberty and self-government far beyond those envisioned in the mother country. England’s government was based on the Constitutional Monarchy, which was limited after the Glorious Revolution and Parliament got more power. However, in America, the governments were much more different than in the mother country. The governors in American colonies were trying to retain a royal image, but the legislatures followed England’s example of a limited monarchy to control these leaders. The colonies had their separate and self-government, which were well organized at the time British tried to enforce its power in America.

The Confederation of New England, an intercolonial political organization established by Puritans in 1643 to coordinate government and to provide greater defense against the French, Dutch, and Indians could be a very good example of self-government. The other example would be the yearly town meeting of citizens of New England villages, which selected village officials and settled village business. As a result of this self-reliance, these colonial governments were able to fuel the later American Revolution.

In contrast to the well-defined and hereditary classes of England, the colonies developed a fluid class structure, which enabled the industrious individual to rise on the social ladder. The social classes in England had always been constant or in other words fixed. If you were a member of the middle class, you could never become a member of aristocrats, the upper class. Comparing to the colonial America, the social structure was fluid in which, a lower class member could become an aristocrat by getting wealthier and working hard. Another comparison can be made between England and her colonies in the way of suffrage. In the North American English colonies, most white males would be allowed to vote by age forty. Voting rights were usually reserved for those who owned a certain amount of land. In England, however only one-third of men would ever vote. The figure dropped to nine-tenths in Ireland.

In conclusions, the colonies in 1763 had changed dramatically in many aspects from those of the mother country, England. Religiously, economically, politically, and socially, the colonial people had changed and even improved on the old English ways. The treaty of Paris (resulting form the end of the French and Indian War in 1763) ended all foreign threats to English colonies in North America, elimination the colonies’ need for British protection and increasing the self-reliance. 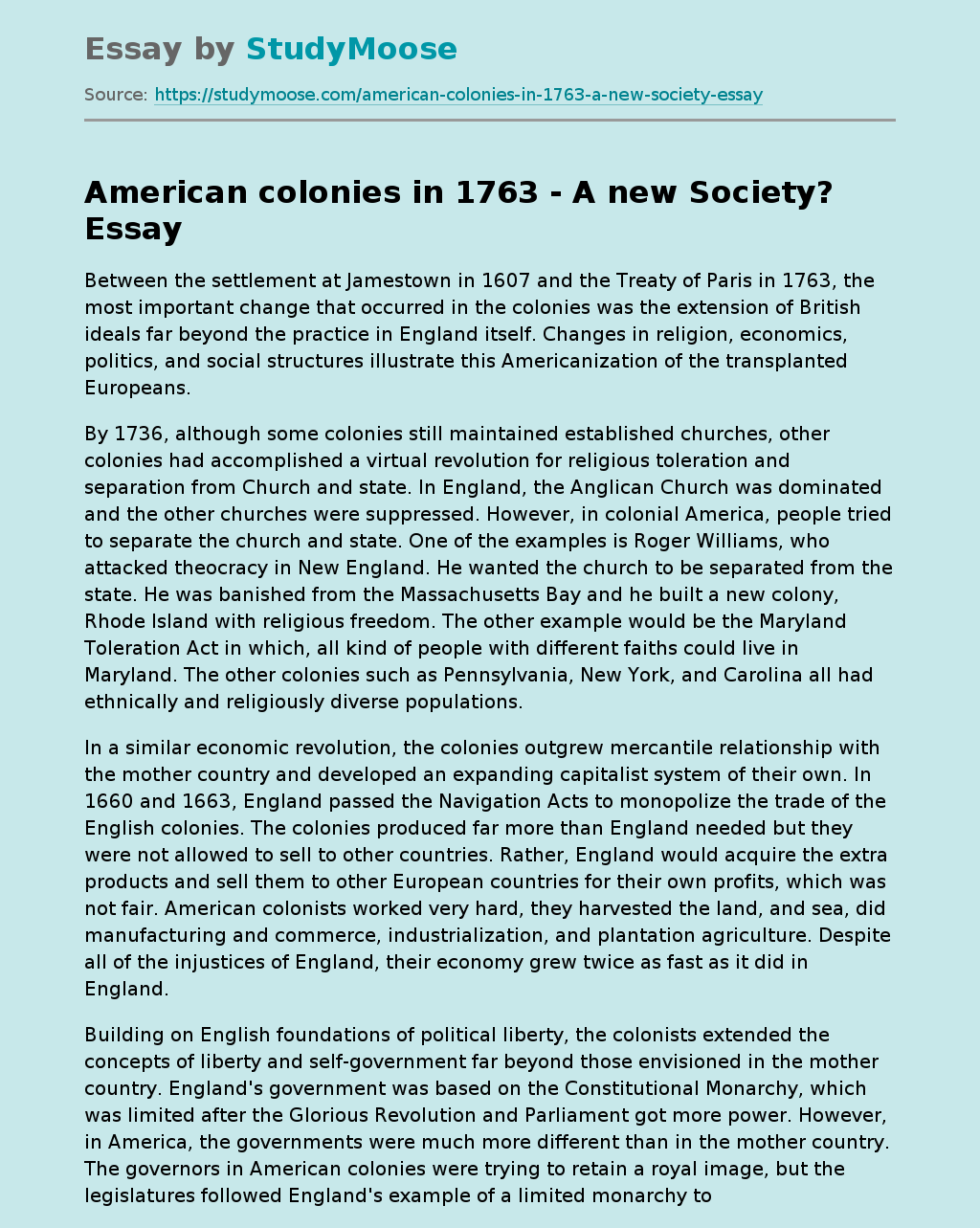