In ‘Pride and Prejudice’, there are a number of people who can be blamed for Lydia’s behaviour. Lydia develops into a selfish, egocentric, thoughtless and superficial girl through the influence of others and a lack of discipline and boundaries.

Primarily, Mrs. Bennet is to blame. Lydia and her mother are ‘two of a kind’ – silly, vain, snobbish, pretentious and flirtatious. Mrs. Bennet has indulged and cosseted Lydia and favours her above her sisters. Instead of preventing Lydia from making an embarrassment of herself and disgracing the family by flirting with the officers when she is too young to socialise, Mrs.

Don't use plagiarized sources. Get your custom essay on
“ In Pride and Prejudice, who is to be blamed for Lydia’s behaviour? ”
Get custom paper
NEW! smart matching with writer

Bennet encourages her behaviour in the hope of getting at least daughter married off. Both Mrs. Bennet and Lydia seem to have a fondness of men in uniform, and are unfortunately crude enough to show it. In fact, Mrs Bennet says,

” I do remember the time when I liked a red coat myself very well – and indeed so I do still at my heart.

From this we can see that Lydia has inherited her foolishness from her mother. Mrs. Bennet is a social climber and very interested in marrying well, but upon hearing of Lydia’s elopement with the discreditable Mr. Wickham, instead of being angry is excited, and thinks only of the wedding clothes. Yet if her daughters Elizabeth or Jane had eloped and were marrying a man with little money and many debts, Mrs. Bennet may not have been so thrilled.

Mr. Bennet also has a reasonable input into Lydia’s behaviour, but in a totally different way from his wife.

Lydia’s father isolates himself in his library, burying himself behind books and a wall of sarcasm, allowing his wife to take responsibility for his daughters’ upbringings, with the knowledge that she wasn’t fully capable of doing it satisfactorily. When Lizzy warns him against letting Lydia go to Brighton, Mr. Bennet does not take heed, and allows Lydia to go anyway.

This is because he thinks that Lydia may be brought back down to earth and shown that she is not so important in Brighton, and that she would be in the safe hands of Colonel Forster’s wife. Mr. Bennet also knows that if he did not, then Lydia would emotionally blackmail him by nagging and crying, as would his wife until he granted permission. Instead of disallowing her, Mr. Bennet is weak and gives in, as he thinks it will be easier for him. Little does he know that Lydia will elope with an officer and disgrace the whole family. However, at the end of the book, he realises his mistakes, and blames himself for Lydia’s behaviour. He says:

“You may well warn me against such an evil. Human nature is so prone to fall into it! No, Lizzy, let me once in my life feel how much I have been to blame. I am not afraid of being overpowered by the impression.”

Another person partly to blame is Mr. Wickham. It is not entirely Lydia’s fault that she cannot resist his charms, as after all, he deceived her older and far wiser sister too. However, his intentions were not honourable and he did not seem to have any intention of marrying Lydia. Had Mr. Darcy not intervened and bribed Wickham, Lydia could possibly have gone home disgraced, with no possibility of marriage in the future.

In addition, Elizabeth herself might feel partly, if not wholly to blame for Lydia’s behaviour; she knew what Wickham was capable of, having heard Darcy’s account about his past behaviour. She could see what Lydia was doing and could have potentially prevented her sister from being subjected to scandalous gossip and also stopped Lydia from making a fool of herself by letting people know what Mr. Wickham was like.

In considering the role that various characters have to play in Lydia’s behaviour, we tend to forget that everyone has a responsibility for themselves, and their actions, including Lydia. After all, she has older sisters who turn out to be respectable young women who have happy, loving marriages to wealthy men. Maybe Lydia has more input into her own behaviour than we should ignore.

In Pride and Prejudice, who is to be blamed for Lydia's behaviour?. (2017, Oct 23). Retrieved from https://studymoose.com/in-pride-and-prejudice-who-is-to-be-blamed-for-lydias-behaviour-essay?post 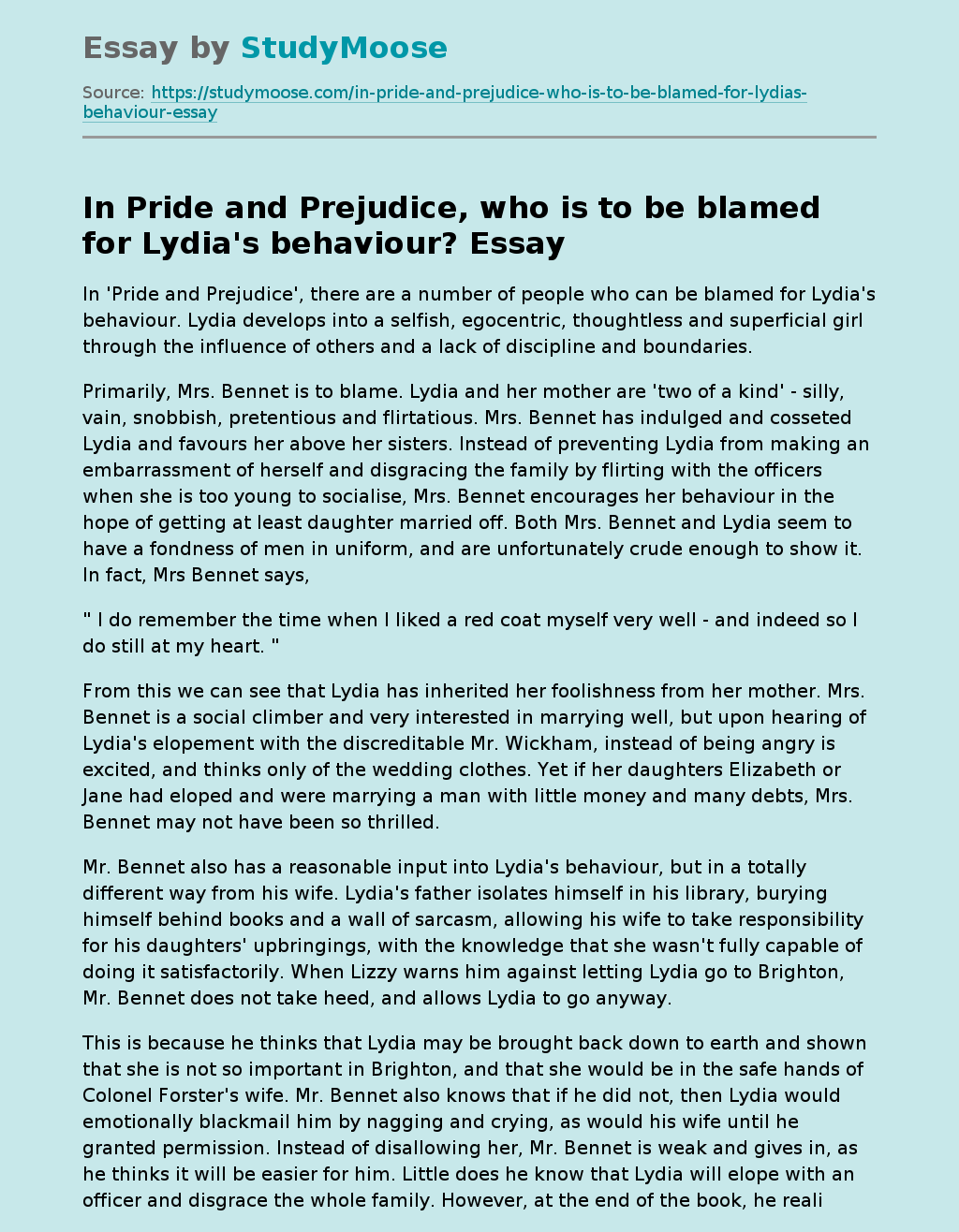