In investigating the changing climate or hearing about it the topic usually seems to head to the warming or freezing of the earth. The new research I studied took the idea of climate change issues in a completely different direction. In the research paper Triggering Global Climate Transitions through Volcanic Eruptions by Mukund Gupta, John Marshall and David Ferreira. Also, by various other sources including The Climate Response to Multiple Volcanic Eruptions Mediated by Ocean Heat Uptake: Damping Processes and Accumulation Potential which was an older paper by Mukund Gupta and John Marshall hoped to demonstrate or have their theories listened to.

Other research I used came from A negative feedback mechanism for the long?term stabilization of Earth’s surface temperature by James C. G. Walker which was also used as research for the original paper.

Triggering Global Climate Transitions through Volcanic Eruption was published in the Journal of Climate. Mukund Gupta and John Marshall are listed as being apart of major departments such “Department of Earth, Atmospheric and Planetary Sciences, Massachusetts Institute of Technology, Cambridge, Massachusetts” (Gupta and Marshall, 2019).

While David Ferreira is as being a part of the Department of Meteorology, Reading and the United Kingdom. The study had additional material that was supplied by the American Meteorological Society and stated “we employ the Massachusetts Institute of Technology Global Circulation Model (MITgcm)2 with a coupled ocean-atmosphere-ice setup in the ‘boomerang’ con?guration introduced by Ferreira et al.” (AMS, 2018).

The article was on scientific research focusing on climate change and how volcanos change the outcome of how climate reacts.

One experiment was done to show “transitions between these states are triggered through volcanic eruptions, where the radiative effect of stratospheric sulfur emissions is idealized as an impulse reduction in incoming solar radiation” (Gupta and Marshall, 2019). After research was done, they stated that “However, even when starting from a Cold climate, Toba-like volcanic events (cooling of order 2100Wm22) must be sustained continuously for several decades to glaciate the entire planet” (Gupta and Marshall, 2019).

When I first read this research, I admit I was lost. The point of this research paper on this project was to explain and research if climate change can be affected by volcanic events and cause transitions through different types of climate. There were three types of climate change they focused on. Warm, which they stated was limited ice cover. Cold, which included the tropics. Finally Snowball, which was when the area was completely covered in ice. They stated that depending on the type of volcanic event, how much time in between events, and how the ocean stands at the time. “Even when starting from a Cold climate, Toba-like volcanic events (cooling of order 2100Wm22) must be sustained continuously for several decades to glaciate the entire planet” (Gupta and Marshall, 2019).

Research was also done to see what a single volcanic eruption would do on the climate. They found that there are two different time scales which were considered one fast and one slow. They spoke of the fast one the most.

“Over the fast time scale, the ocean sequesters cooling anomalies induced by the eruption into its depth, enhancing the damping rate of sea surface temperature (SST) relative to that which would be expected if the atmosphere acted alone” (Gupta and Marshall, 2018)”

During eruptions sulfur particles become sulfur aerosols and change incoming solar rays in the atmosphere which cause the earth to become cooler. “These sulfate aerosols have a residence time of about 1-2 years in the stratosphere but can cause surface cooling for many more years after the eruption.” (Gupta and Marshall, 2018). Both sources including the supplement article that went with the first journal Triggering Global Climate Transitions through Volcanic Eruption are concentrated on demonstrating that volcanic eruptions can and will affect the global climate.

“Numerical experiments are carried out with the coupled atmosphere, ocean, sea ice, and land model based on the MITgcm. The particular setup of the model used here comprises two 458 wide ?at continents separated by a 908 angle such that the ocean is split into a narrow Atlantic-like basin and a wide Paci?c-like basin connected to an unblocked ”Southern Ocean” in the South”(Gupta and Marshall, 2019).

There was also graphs to represent the climate in a model that showed the results in a scientific way.

The conclusions that the authors indicated in their paper were “Although the models employed are rather idealized, we offer the following general conclusions that hopefully do not depend on those idealizations:” (Gupta and Marshall, 2019). That although scientific experiments were performed, they realized that the answers they provided were not set in unison and needed additional scientific research. That while they were able to accomplish the scientific goals to demonstrate about the global equilibria (climate model including the atmosphere), they know there is further research that could be done. When compared to the earlier paper that was written about The Climate Response to Multiple Volcanic Eruptions Mediated by Ocean Heat Uptake: Damping Processes and Accumulation Potential. They updated its data in order to reflect the new findings while using the preliminary findings to show differences between the two journals. An example of this would be

“Perturbation experiments are conducted by reducing the top of the atmosphere (TOA) insolation. The forcing F is diagnosed as the net radiative imbalance at the TOA, averaged over the ?rst year of the simulation. For step forcing experiments, the insolation is changed abruptly at t 5 0 and subsequently held constant in time. For volcanic forcing experiments, we crudely emulate the effects of stratospheric aerosol injection by uniformly reducing the insolation for 1yr and subsequently turning the forcing off (as in Gupta and Marshall 2018). We also conduct simulations comprising successive eruptions separated by a speci?ed time interval” (Gupta and Marshall, 2019).

When reading these Scientific Journals, I thought about how volcano eruptions impact the climate and the earth in its entirety. Volcano eruptions may affect the earth and can with time, proper conditions, and depending on the volume of outbreaks the earth could be covered completely in a freeze. These journals help me see that all though it is possible it needs more research that it would have to be a “perfect” event with appropriate conditions for volcanos to cause the globe to freeze. When relating this to my life I believe it has subsided my fears about volcanos given that I read, and watch shows about Yellowstone. Which talks about how it could cause the ice age. To read scientific facts and experiments help me realize that although it’s a possibility it’s very slim. My conclusion was that this scientific journal is in fact based in good scientific evidence, based on hypothesis, experiments, and conclusions that have been tried. I also believe that the researcher behind these documents are trying to expand on scientific expertise listed by refreshing their experiments or trying relevant experiments to not only broaden their knowledge but test the boundaries. Therefore, I would highly recommend this scientific journal to others for scientific research. 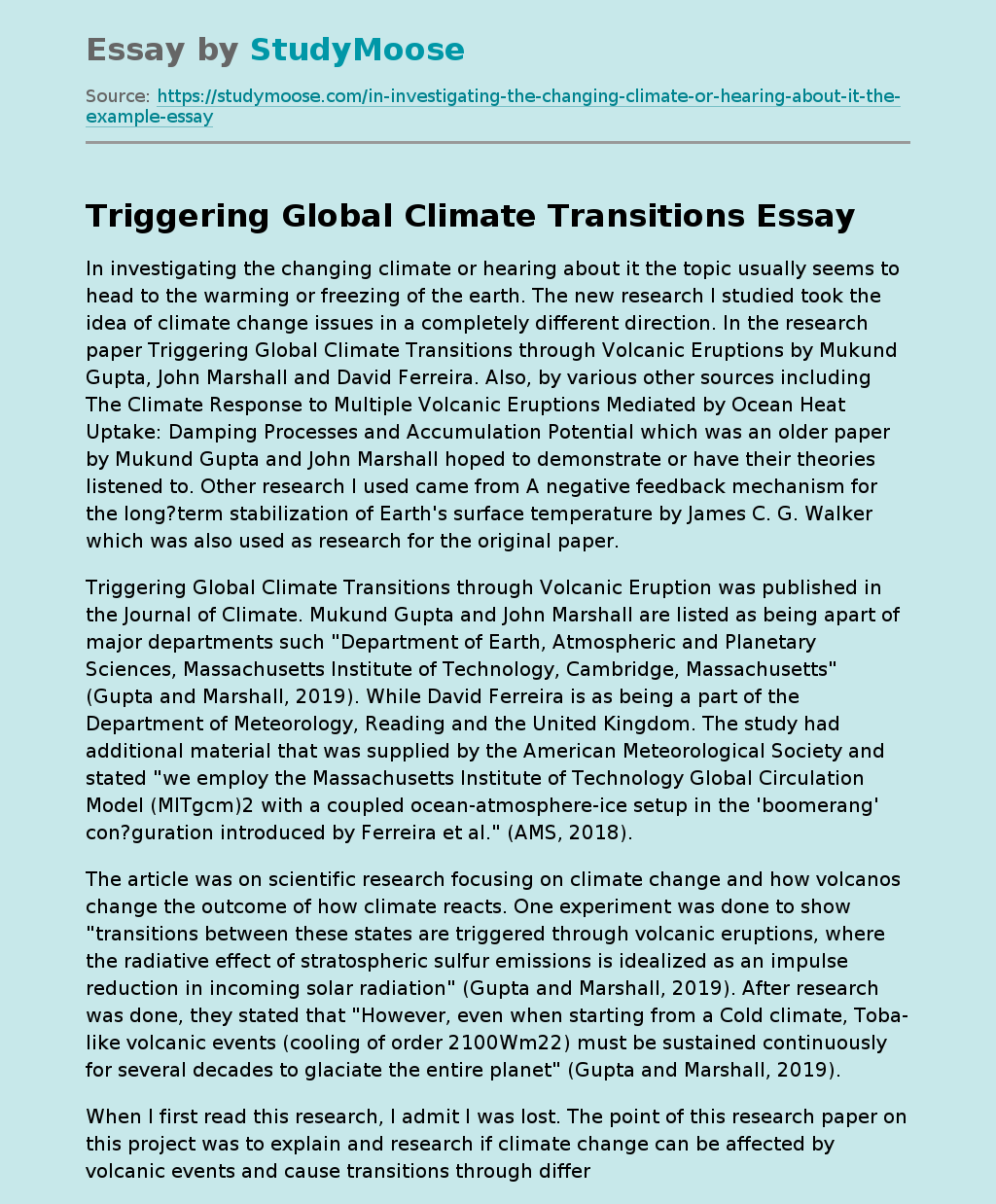