Automation has had a notable impact in a wide range of industries beyond manufacturing (where it began). Once-ubiquitous telephone operators have been replaced largely by automated telephone switchboards and answering machines. Medical processes such as primary screening in electrocardiography or radiography and laboratory analysis of human genes, sera, cells, and tissues are carried out at much greater speed and accuracy by automated systems. Applying automation to Grading systems wherein it will also make a task easy and accurate.

Don't use plagiarized sources. Get your custom essay on
“ Importance of Workable Computerized Grading System ”
Get custom paper
NEW! smart matching with writer

Both systemic reform and curriculum cannot be achieved without the aid of technology (Fletcher & Wolf, 2007). Grading and reporting are relatively recent phenomena in education. In fact, prior to 1850, grading and reporting were virtually unknown in schools in the Philippines. Throughout much of the nineteenth century most schools grouped students of all ages and backgrounds together with one teacher in one-room schoolhouses, and few students went beyond elementary studies. The teacher reported students’ learning progress orally to parents, usually during visits to students’ homes (Guskey).

Researches in learning assessment, especially in terms of academic performance, have long criticized traditional rating schemes that provide feedback to students. Because learning is multi-faceted, most critiques of such formats tend to see these as superficial and inadequate arguing that they tend to cover only the areas in learning that are widely rated, leaving other areas in learning under-assessed. As a result, different systems were proposed and varying rating structures were employed by different schools in the country such as point system averaging and weighted averaging.

This school year, the Department of Education (DepEd) will be using a new grading system in public elementary and high schools in connection to the implementation of K to 12 BEC (Basic Education Curriculum) program.

The traditional numerical values in report cards will be replaced by letter-scheme grading system, with “A” (abbreviated “Advanced” level of proficiency) as the highest grade and “B” (short for “Beginning”) as the lowest. In the event that this format will be fully implemented in the target school, which in this proposal will be San Isidro Elementary School, the workload of the teachers will be increased because they will have to compute for the numeric equivalent of each letter grades. The proponents of this proposal wish to reduce their workload by eliminating the need for manual computation and recording of each grade.

The common problems encountered in manual recording and computations are error- and file-handling, and redundancy. As the workload gradually increases with growing amounts of grades and student lists that need to be attended, it becomes tedious on the part of the teacher to proficiently manage them in time for documentation and file submission to higher education authorities. As such, this paper aims to produce a workable computerized grading system that will address these issues. 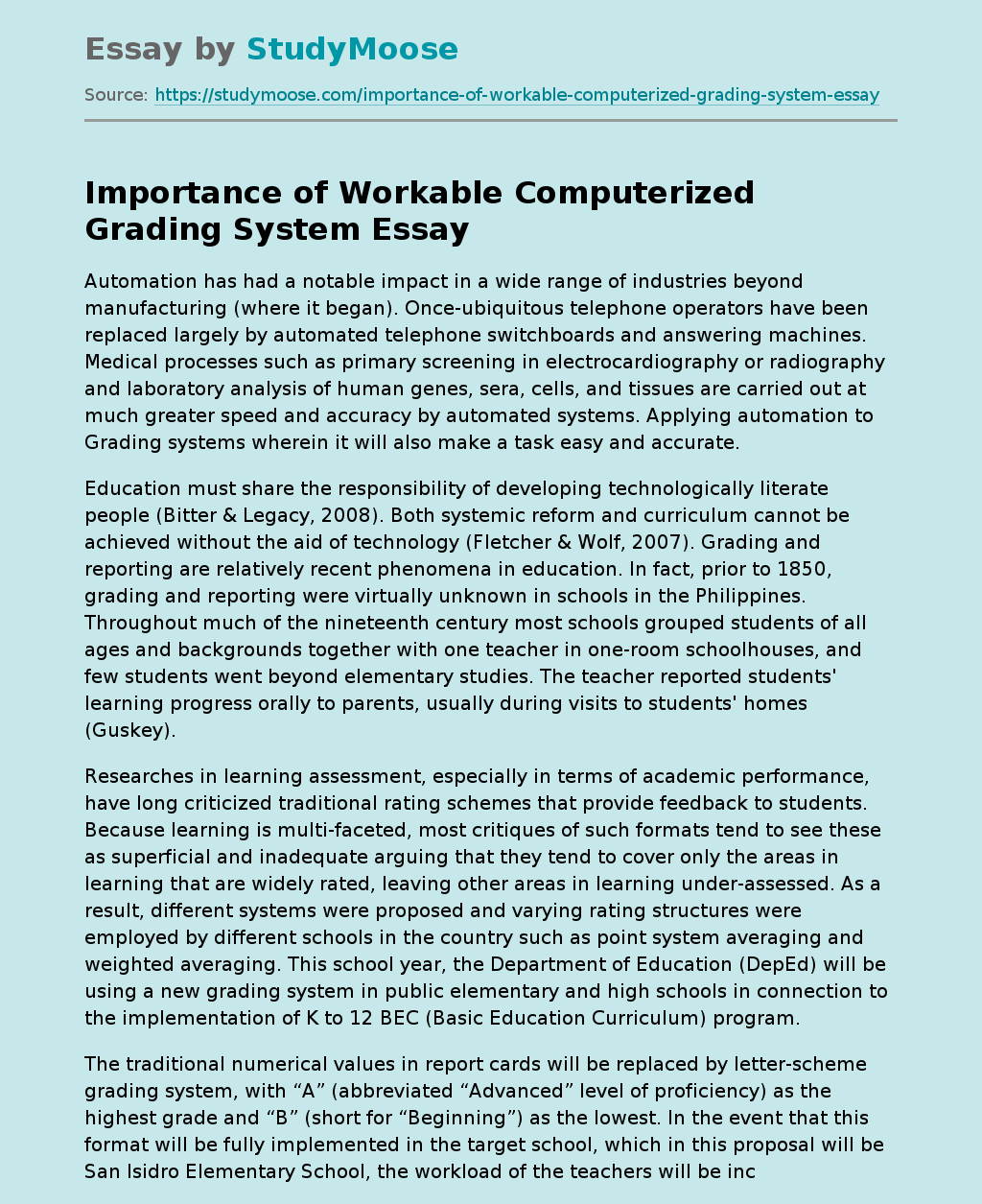