Chapter 2 Review of related literature Related Literature Foreign According to Robson (2001), usability is a key requirement for users, says Elisabeth Robson, Product manager for Online Computer Library Center. The catalogue has become a way to pull together disparate resources, including commercial resources and web links. management systems also allow circulation, including check in/check out and enable libraries to purchase materials and track where they are. According to Chad (2009), consulting is at a major point of change in the wider information economy within which library systems form part of a larger whole.

He was writing in a briefing paper about the study in library management systems. This studyexamined the systems used in higher-education libraries across the UK and came up with some significant observations and recommendations. It noted that the LMS market in UK higher education is already mature and that four main vendors ( Ex Libris, Innovative Sirsi Dynix and Talis) have almost 90 per cent of the market. This market maturity means, according to the study authors, that the benefits to libraries of changing LMS provider are limited.

Library users expect to find everything together says Stephen Abram, vice president for innovation at Sirsi Dynix, the leading provider of software solutions and associated services for libraries. According to her traditionally, the library management system or integrated library system (ILS) was responsible for running libraries efficiently and effectively. Over the last few years, the role of the ILS has been expanding from meeting library needs to delivering user experience. Local

According to Eden (2011), views that most libraries are forced to work with fewer staff because of the having a more improved and modernized system for their library. According also to the study, the library administration need to emphasize to their staff that the organization has a vested interest in providing them with the tools and training they need to assist the organization in the new information marketplace. These may include search engines, circulation systems, and the online public access catalog. According to Lopez (2002), University of the Philippines Mindanao when UP in Mindanao accepted its first batch of students in 1996, the Main Library collection was integrated with the core collection of the School of
Management (SOM) Library at the Stanfilco Bldg., Ladislawa Avenue, Buhangin, Davao City. The Filipiniana and General References were housed together with the College of Arts and Sciences (CAS) collection in Room 2 of the Philippine Coconut Authority. In the Second Semester AY 1996-1997,the CAS Library moved to its main campus in Bago Oshiro. Upon the recognition of UP in Mindanao by the Board of Regents (BOR) as a constituent unit (CU) of the UP System, the CAS was split into two (2), namely: College of Humanities and Social 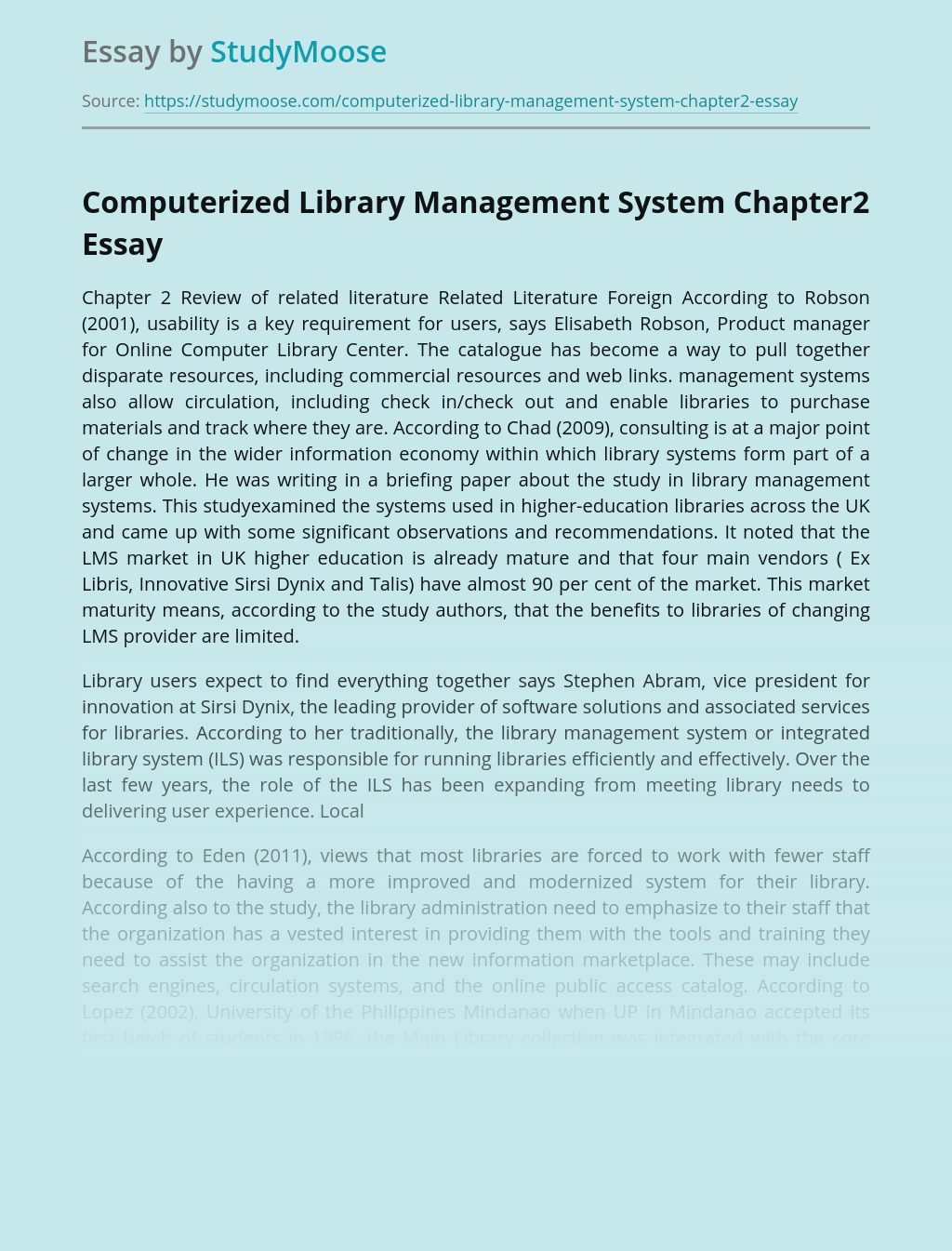 Teaching with New Technology is a series that provides teachers with practical, research-based approaches to using computer technologies in their language classrooms. We have deliberately chosen to use the term ‘computer-based technologies’ to highlight the technologies where the computer is an obvious tool. Many other classroom tools and artefacts use digital technology, but they do... VIEW ESSAY

View sample
Will computers replace books in the future?

Medical regulatory and legal compliance are important areas of health records management. Consider how deeply you might be interested in overseeing these aspects of patient information in your professional work. From what you have learned about compliance issues so far, highlight the choices that best reflect your career interests and explain your reasons: 1. I... VIEW ESSAY

Chapter I Introduction When did this new and insidious variety of crime actually come into being? One may say that the concept of the computer came with the invention of the first abacus, hence it can be said that “cybercrime”. It has been around ever since people used calculating machines for wrong purposes. However, cybercrime... VIEW ESSAY

Based on the previous research, the computer has also disadvantages aside from the fact that it provides the students information’s and other features. In that research they conclude many students spent more time playing rather than researching and doing other academic works. This is result to computer addiction. From these students, huge percentage of them... VIEW ESSAY