Government Punjab Public Library Lahore lies in the heart of the city of Lahore at the Library Road near Lahore Museum. Thelibrary is centrally situated in this way and has a pleasant atmosphere for a calm and peaceful study. The library holds an exceptional rare collection of books in English, Urdu, Persian, Arabic and Punjabi. The total collection is about 500,000 books now, comprising of massive numbers of magazines and newspapers, reports, also the old gazettes of Punjab, Pakistan and undivided India and more than 1,500 manuscripts.

It started off with an old monument-type building where they had only 70 books. Gradually donations of books and documents were made and the library system managed to build up strongly. It? s main purpose was to build a public library and a reading room. The other Blocks were built in 1924, 1939 and 1992. Introduction: Government Punjab Public Library is facing some major problems from quite some time.

These problems include mostly theft and it is discovered after the theft, waiting in long queues before issuing the book, discovering, after waiting for long, that the desired book is unavailable, tast is done manually.

There is no system to keep a proper check on the books in stock and also on the visitor. The need to introduce an automated system as a solution to the problems faced by the members of the Government Punjab Public Library bought me to RFID system. By introducing RFID system, which happens to be a combination of a computer chip and a small radio antenna that allows object to self-identify, we intend to solve all the above mentioned problems.

This is a unique system of its kind that not only is the fastest, easiest and most effective way to track, locate and manage library material but also pledge security and safety.

A number of deficiencies have been experienced in the current system of the library since the work is done manually which happens to be a big problem. Hence it seems to be the need of the hour to provide The Government Punjab Public Library with an automated system which is going to make lives, of all those who really want to bring some change by devoting most of their times in gaining knowledge, a lot easier. RFID system would help in making an effective flow of book circulation. Also, it helps in tracking the book in minutes instead of hours and the unique ID of the RFID tag prevents counterfeiting.

Through market research ie; through the interviews that I conducted from the members and librarian on my visit to the library, I have concluded that 87% people are in a desperate need for a better system. According to these people, if an automated system is introduced not only members but non-members would also purchase or issue books which would end up increasing their market share. Apparently the conditions of Government Punjab Public Library demand an automated system that not only keeps a check on the stock but also helps the librarian in looking for one and also deals with security concerns.

Therefore I believe that RFID system happens to be the best suited solution for a problem like this because this society is capable of producing really good writers, scholars, poets, students and a platform like an automated Library system can be a gateway to success for such people. I determinedly believe that by pursuing this possibility and by implementing, controlling and maintaining a system like this, we will be able to satisfy a large number of people who are the only hope to bring a change about a change in Pakistan. Discussion Apparently Government Punjab Public Library is undergoing some problems.

These problems lead to low members follow–up and is the reason why there is a need for a better system. For starters, currently members complaint of experiencing long queues which frustrates them and they don’t want to return back. The frustration is further caused when after waiting for several minutes it is discovered that the book isn’t available in the library. And in case the book is available, the member has to wait for long since the manual entry of book issuing takes long. Disappointment follows when members receive unfriendly staff.

Moreover constant cases of theft have been witnessed by the librarian. Members often hide the books in their bags and leave without issuing. This not only causes stock mismanagement but also results in disappointment. To solve these problems, installing an RFID system, is important. The purpose of installing RFID system in the library system is to change the current manual and hectic structure. This would not only help in eliminating theft but will also reduce time consumption and level of disappointment that is caused when discovered that the desired book/s is/are unavailable.

Hence, getting an effective and automated Library Management System is essential. The reason why I chose RFID system is because it is the fastest, easiest and most efficient way to track, locate & manage library materials. Not only that, through RFID system automatic check-in and check-out can be practiced. While interviewing the librarians at the library I, time and again, heard them complaining about the mismanagement of the stock and also that it takes long in locating a book.

Through RFID system Library inventory tracking can be done in minutes instead of hours because it is basically a wireless system for automatic identifications and tracking by using radio frequency electromagnetic fields, by transferring the data from a tag attached to a product, which in this case are the books. One of the problems that the librarian highlighted and laid great stress on addressing that problem was the stealing of books. According to the librarian, this is one of the biggest issues the management of library is dealing with but with the help of RFID system, they can easily address to a situation like this.

With the help of walk through gates, which is one of the components of RFID system, stealer can be easily located. This is possible because every book will have its own RFID tag like every member will have theirs. And if someone tries to take the book without issuing, that person can easily be traced with the help of walk through gates which will start to beam as soon as some is illegally exiting. This brings me to the point of discussing some of the benefits that can be driven from introducing RFID system.

For starters, with the walk through gates and tags, no thefts will be claimed hence, a secure library management system will be exercised. Moreover the schedule of the staff will become flexible. This is because the routine would not be as hectic as before. Also if two persons were dealing with a task earlier, now only one can easily handle it. Furthermore, trained workforce would walk in. There is another business benefit that will be gathered in the form of customer satisfaction. Obviously, when the customers would not have to wait for their turn, standing in a long queue, they would be much happier and content. Conclusion:

Keeping in mind the benefits it can easily be concluded that this system will be a big success once installed. It won’t be a wise move to deny the fact that it is going to be a big investment but analyzing the benefits which are significant and undeniable, the cost would be a secondary thing to worry about. Currently the books are mishandled and misplaced by the incessant handling processes of the staff members. There is too much hassle in material handling. Now this issue would be resolved due to the self-digitalized service by the members and the staff as well and as a result the inventory would be properly preserved. 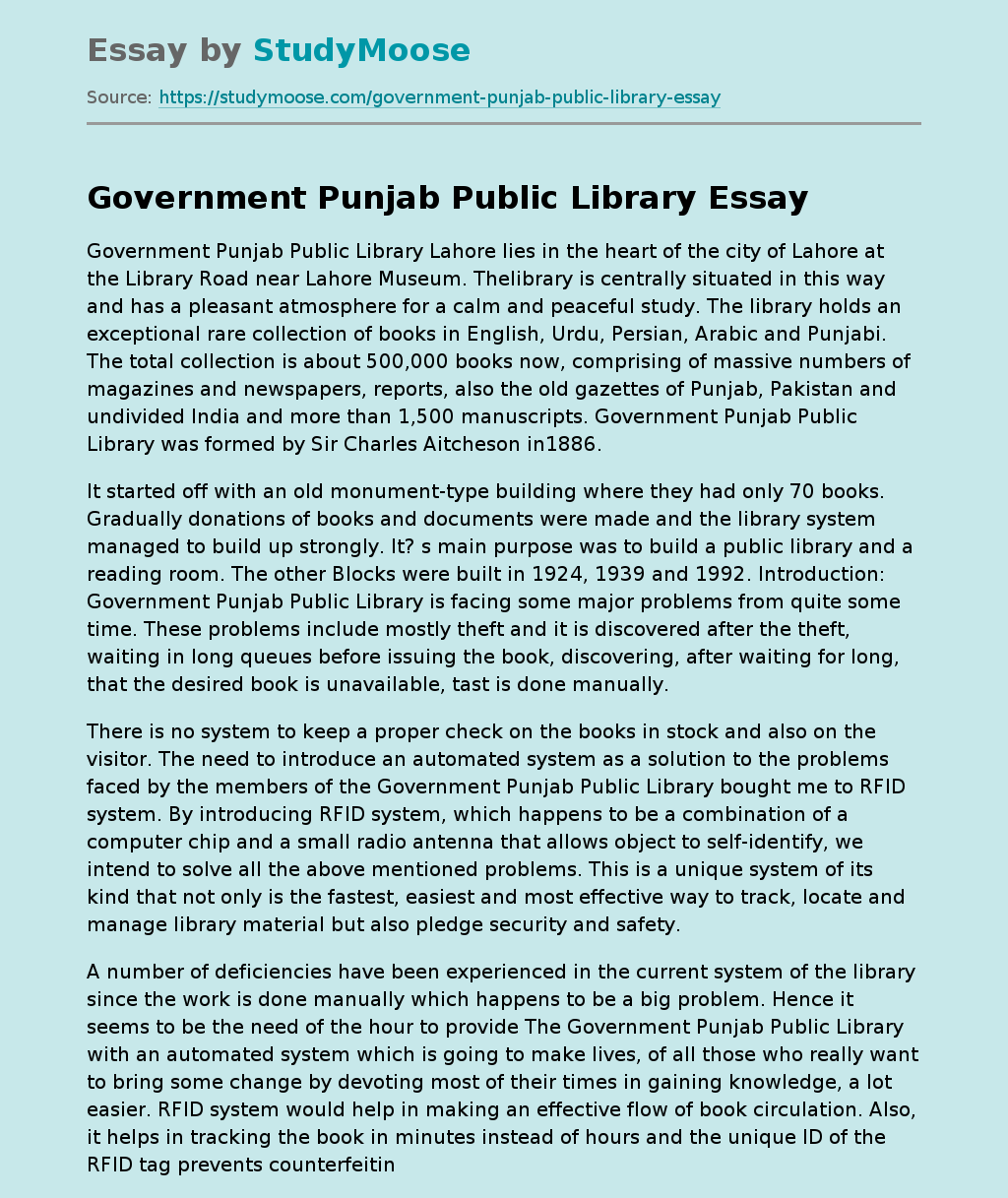