Introduction
The logistical problems associated with distributing, collecting, grading, and returning assignments and the difficulties in ensuring fairness and consistency in grading tend to increase non-linearly with the number of students enrolled in a class. This is especially true in project based design courses where evaluation is subjective, deliverables are team-based, and the philosophies and expectations of course faculty members may vary substantially.

Online course management programs can be very helpful in the dissemination of information and the collection of grades in very large courses like those offered as part of the freshman core curriculum.

Don't use plagiarized sources. Get your custom essay on
“ Development of Online Grading System ”
Get custom paper
NEW! smart matching with writer

However, the automated grading capabilities of these programs are generally limited to question banks with clearly defined right and wrong answers. More advanced computer-assisted grading systems have been developed for the assessment and grading of students. However, fully automated systems are still limited to applications with well-defined rules and objectives.

Computer-assisted grading rubrics that guide the grading process and compile the final results are a more promising alternative.

rubrics can lead to increased “validity and accuracy of grading – making grading more even handed,” increased feedback for students, and increased student satisfaction. Kurt and Gilbert also observed that the use of grading rubrics increased the consistency of grades across multiple graders, especially when teaching assistants were involved.

The advantages of computer-assisted and web-based grading rubrics have led to the development
of online tools for the assessment of student.

However, these systems still do not fully address the problems of real and perceived teacher bias in grading, grade inflation, and professor pleasing. For example, 51% of respondents in a 20013 faculty survey on capstone design courses rated their perception of grading fairness as only “fair – I seldom hear complaints” and none rated their perception as a “all bias and distortion have been eliminated”. These types of concerns have led many students to prefer that design projects be evaluated by external jurors because they “want the jury process to be more objective and believe that the presence of external jurors will help achieve this”. This led San Sebastian to “to take professors out of the grading process” entirely and “replace them with professional evaluators who never meet the students,” who “don’t worry that students will punish harsh grades with poor reviews” and who have “no temptation to skew results in any way other than to judge the students’ work.

This paper presents an online computer-assisted rubric-based grading website that was developed in conjunction with a distributed jury-based grading system to improve the fairness, consistency, and efficiency of grading in a large required first year project-based design course. This work provides a brief overview of the course, its deliverables, and the breakdown of the final grade. It discusses the design requirements, features, and implementation of the online grading system. Reactions from course faculty and staff members based on end-of-semester survey results are presented. Finally, the current limitations and future development directions of the online grading system are discussed. 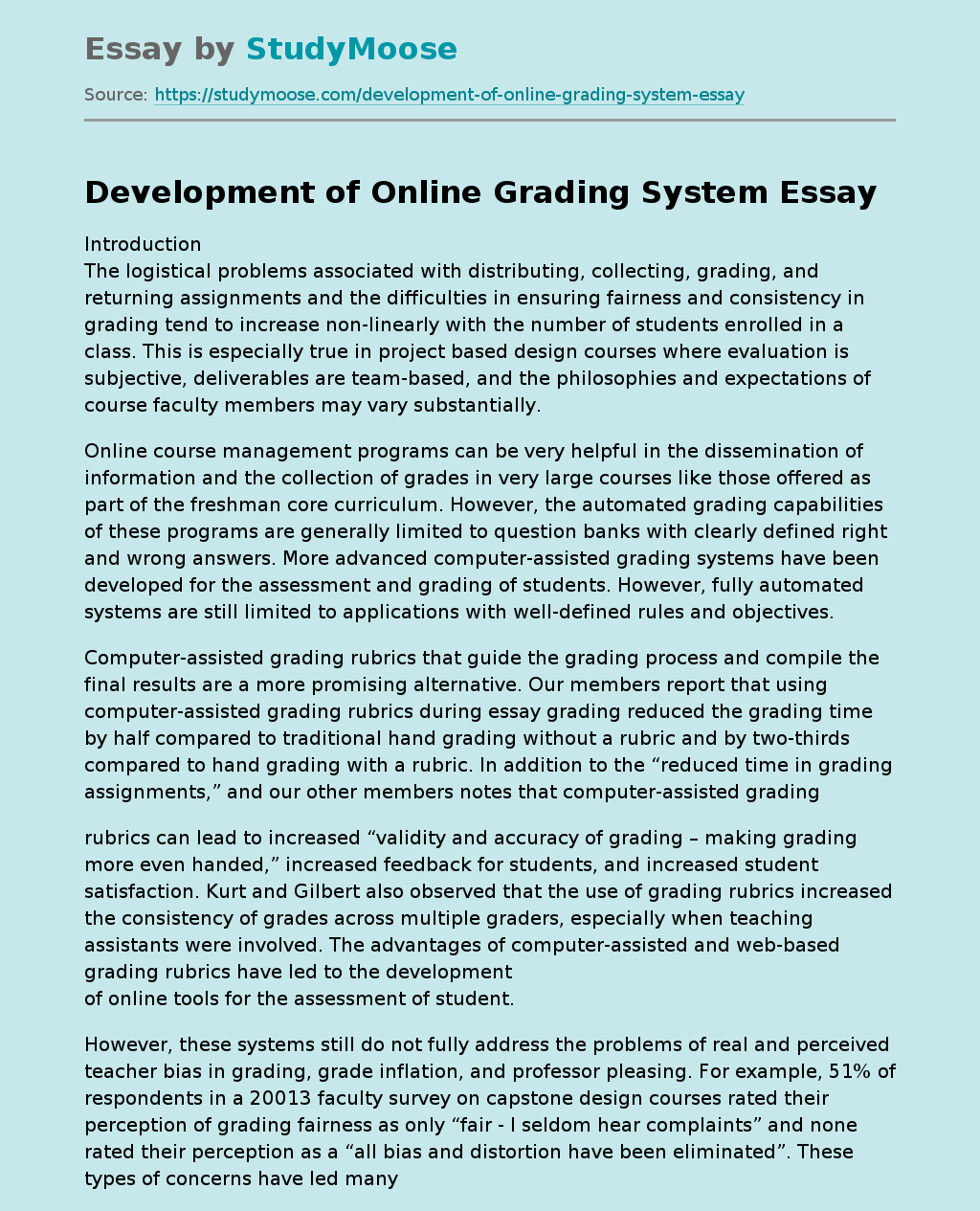