Prosocial behaviors are voluntary behaviors made with the intention of benefiting others (Eisenberg & Fabes, 1998). This definition carefully circumvents the potential benefits to the person performing the prosocial behavior. Prosocial behavior is often accompanied with psychological and social rewards for its performer. In the long run, individuals can benefit from living in a society where prosociality is common (which, in evolutionary terms, increases reproductive potential). It has therefore been difficult for researchers to identify purely altruistic behaviors, benefiting only the recipient and not the performer.

Don't use plagiarized sources. Get your custom essay on
“ Importance of Prosocial Behaviour ”
Get custom paper
NEW! smart matching with writer

Nevertheless, behaviors benefiting others, but whose main goal is self-advantageous (e.g. cooperative behaviors intended to obtain a common resource), typically are not considered prosocial. Typical examples include: volunteering; sharing toys, treats, or food with friends; instrumental help (e.g., helping a peer with school assignments); costly help (e.g. risking one’s own life to save others); and emotionally supporting others in distress (e.g., comforting a peer following a disappointing experience or caring for a person who is ill).

Prosocial behavior has roots in human evolutionary history as de Waal’s comparison with other species shows. Nevertheless, Fehr and Fischbacher note that humans are unique in their degree of prosociality. Hoffman’s theory proposes that prosocial behavior becomes increasingly other-oriented as children mature. Infants feel self-distress in reaction to the distress of others because they are incapable of differentiating their own experiences from those of others. Gradually, self-distress is replaced by other-oriented concern, requiring some understanding of others’ mental states (Hoffman, 2000). Zahn-Waxler, Robinson, and Emde show that by age 4, many children can react empathically to others, including offering help to those in distress.

The 1998 Eisenberg and Fabes meta-analysis found that prosocial behavior increases with age, although increases varied in size, depending on the methodological aspects of each study. In one study by Benenson, Pascoe, and Radmore, about 60 percent of 4-year old children donated at least one of 10 stickers they received to a peer, and about 85 percent did so at age 9. This increase was markedly elevated for higher-SES children compared to lower-SES children. From childhood to adolescence further increases are found in sharing, but not in helping or providing emotional support (Eisenberg & Fabes, 1998). The boost in prosocial behavior with age is attributed to developmental increases in cognitive abilities associated with detecting others’ needs and determining ways to help, in empathy-related responding, and in the moral understanding of the importance of helping others (Eisenberg et al., 2006).

Many contextual factors are associated with prosocial behavior. For example, Cole and colleagues report short-term success for television programs designed to increase children’s prosociality. Social psychological experiments consistently show that recognizing a situation as requiring assistance, involving personal responsibility, and enabling oneself to help, all increase helping behavior (Penner, Dovidio, Piliavin, & Schroeder, 2005). Individuals are more likely to provide support in situations that promote personal psychological and material rewards, or where the costs (e.g., guilt) associated with not helping are prominent. Finally, individuals are more likely to behave prosocially towards similar or likable others (Penner et al., 2005), and towards others considered to be close, especially kin (Graziano et al., 2007). This pattern may reflect an ultimate evolutionary goal of kin selection as described by Hamilton, although de Waal notes that helpers’ psychological goals may be quite different. Genetic relatedness aside, prosocial behavior towards family members probably involves a sense of duty, reciprocity, and affective relationships.

Rushton describes moderate consistency in individuals’ prosocial behavior across varying situations and contexts, demonstrating both stable individual differences in prosociality and the importance of contextual factors. Research following children from early childhood to adulthood supports the existence of the long-debated altruistic or prosocial personality (Eisenberg et al., 1999). Individual differences in prosociality are linked to sociability, low shyness, extroversion, and agreeableness, although specific prosocial behaviors may require a combination of additional traits, such as perceived self-efficacy in the case of helping (Penner et al., 2005). Researchers Bardi and Schwartz highlight the importance of individuals’ specific prosocial values, including emphasizing the importance of the welfare of others, as an additional variable likely to influence prosocial behavior. Personality and contextual variables are likely to interact in determining prosocial behavior. For example, agreeable individuals were more likely to help an outgroup member than low-agreeableness individuals, but agreeableness was not associated with helping an ingroup member (Graziano et al., 2007). Environmental factors linked to individual differences in children’s prosociality include parental modeling of helping behavior and use of inductive discipline (e.g., explaining to children the consequences of their behavior) as opposed to power-assertive discipline (e.g., punishment) (Eisenberg & Fabes, 1998). Beyond parental influence, siblings, peers, and schools also may affect prosociality. For example, as Wentzel, McNamara, and Caldwell point out, children’s prosociality may be influenced by close friends. Furthermore, the better the affective quality of the friendship, the more influential friends are to each other’s prosociality. Genetics also contribute to individual variation in prosociality. Research on adults finds that prosociality is substantially heritable. Research on young children shows lower heritability, demonstrated by one longitudinal twin study showing increases in the heritability of parent-rated prosociality, from 30 percent at age 2 to 60 percent at age 7 (Knafo & Plomin, 2006). Genetic and environmental effects are often intertwined. For example, parental reasoning may be more effective with highly attentive children, while external rewards may work better for other children. These geneenvironment interactions, in which children’s genetically influenced tendencies interact with environmental influences in determining behavior, are highly likely. Further investigation is necessary of gene-environment interactions with regard to prosociality.

Gene-environment correlations can also shape individual differences in prosociality. For example, children’s low prosociality is related to parents’ use of negative discipline and affection. This relationship can be traced back to children’s genetic tendencies, implying that the genetically influenced low prosociality can initiate a negative reaction from parents (Knafo & Plomin, 2006). Gender and culture are additional predictors of prosocial behavior. A meta-analysis found small differences favoring girls in prosocial behavior, smaller than expected based on gender stereotypes and lower for instrumental help than for other prosocial behaviors (Eisenberg & Fabes, 1998). Some evidence suggests that children in Western societies are less prosocial than children in other cultures, but some studies find no differences along these lines (see review by Eisenberg et al., 2006). A field study by Levine, Norenzayan, and Philbrick found large cultural differences in spontaneously helping strangers. For example, the proportion of individuals helping a stranger with a hurt leg pick up dropped magazines ranged from 22 percent to 95 percent across 23 cultures. Although national wealth was negatively associated with helping rates, the closely related cultural value of individualism-collectivism (individualism is on average higher in richer countries) was not related. A compelling cultural explanation for cross-national differences in prosocial behavior was still needed as of 2008. Perhaps, cultures differ substantially in what each promotes as prosocial behavior (Eisenberg et al., 2006).

RELATION TO OTHER ASPECTS OF SCHOOL FUNCTIONING

HOW TO PROMOTE PROSOCIAL BEHAVIOR

Although observational studies suggest that preschool teachers usually do little to encourage prosocial behavior, teachers’ behavior and school policies can promote pro-sociality. Positive, warm, and secure teacher-student relationships are associated with children’s prosociality (Eisenberg et al., 2006). To overrule the possibility that highly adjusted children are both prosocial and elicit positive reactions from teachers, intervention studies are essential. A five-year longitudinal study by Solomon and colleagues finds that training teachers to promote children’s prosociality and developmental discipline increases children’s prosocial values and behaviors. The program provided children with an opportunity to work collaboratively in small groups and participate in activities designed to promote social understanding. It emphasized prosocial values through the use of relevant media and highlighting children’s positive behaviors and provided opportunities for active helping such as a buddy program that assigned older children to help younger peers. In another school intervention reported by Fraser and colleagues, children received training designed to teach social problem-solving skills and to reduce peer rejection. Simultaneously, parents participated in home lessons designed to improve parenting skills (e.g., child development, parent-child communication, problem-solving, and discipline). Intervention children increased in prosocial behavior in comparison to the control group. Another experimental school program reported by Flan-nery and colleagues shows longitudinal gains in children’s prosocial behavior by altering school climate by teaching students and staff five simple rules and activities: (a) praise people, (b) avoid put-downs, (c) seek wise people as advisers and friends, (d) notice and correct hurts one causes, and (e) right wrongs. McMahon and Washburn point out that effective interventions often work to address students’ empathy and problem-solving skills and are often tailored to the cultural, developmental, and behavioral characteristics of students. 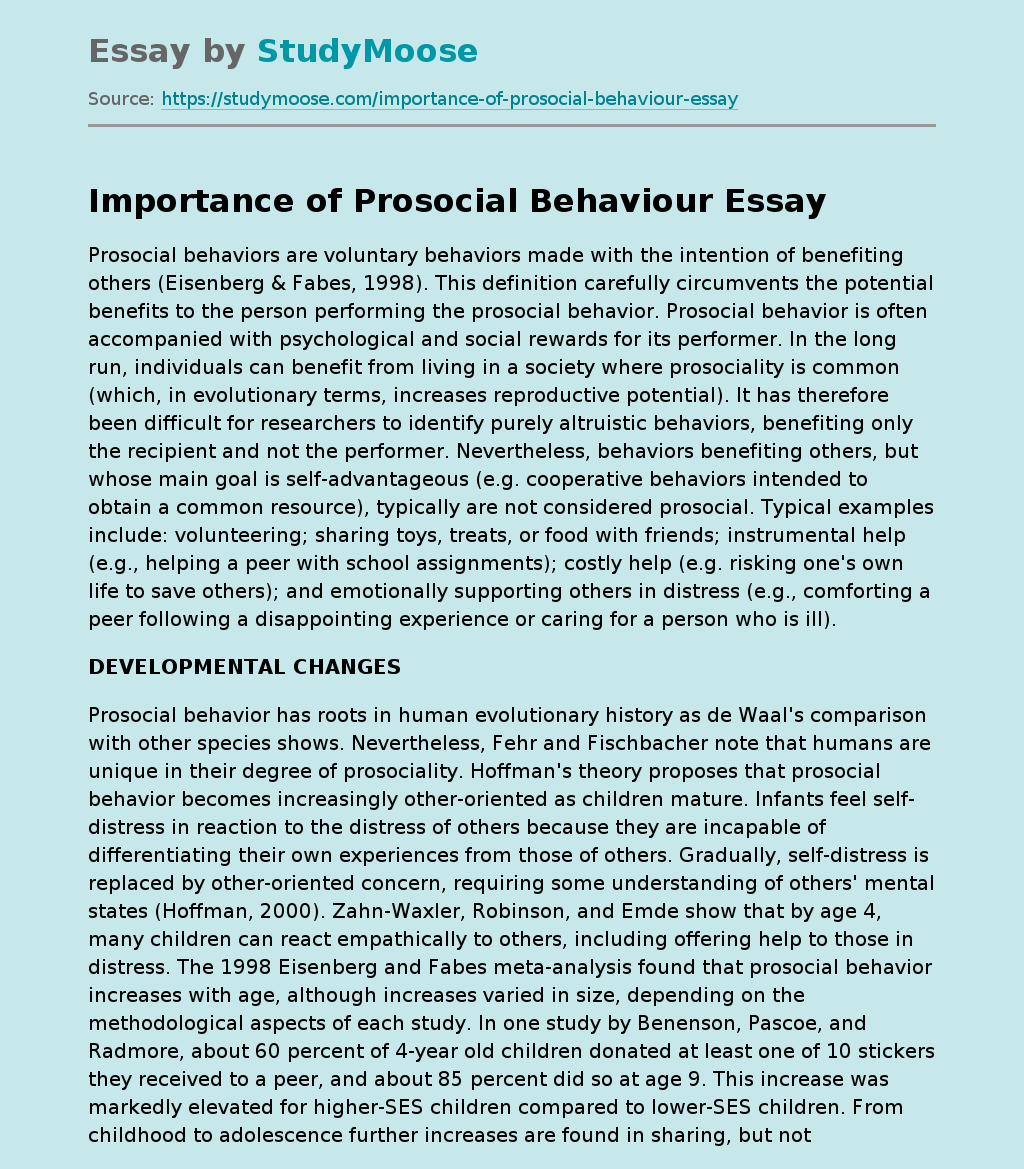