Role of environment in human behaviour

The term environment refers to the cultural and social aspects that shape our lives both as a population and as a person. Research has examined the influence of different factors on human behaviour and performance, external factors depend on a persons upbringing, culture and the influence they receive from their peers. The environment in which we live has a considerable impact on our behaviour and performance, three of which will be explored in more detail. The first being Albert Bandura’s study with ‘Bobo dolls’ and the effect violence has on a child’s behaviour.

Don't use plagiarized sources. Get your custom essay on
“ Role of environment in human behaviour ”
Get custom paper
NEW! smart matching with writer

Whilst also looking at how friendships are built and the different peer pressures we face as children and adolescents and how the friendships we build can influence behaviour and performance whilst also defining who we are. The third type will be looking at the effects of a stroke on the brain and the way in which it recovers and reprogram’s itself.

Social learning is described as learning new behaviours by observing others.

These behaviours being observed can be of good or bad behaviour. There are certain things that can influence human behaviours, for example media violence, films, TV and computer games. Today the internet is powerful and has the power to influence behaviour, online games portray extreme violence that both children and adults can participate in. With technology becoming more advanced and the digital world available more easily to young people it is becoming a concern that this is having a serious effect on attitudes towards violence, in the sense of what is the correct way to behave and what is not (Oates, 2010, p.

Albert Bandura conducted an experiment to find out if there was a relationship between children witnessing violence and them carrying out violent acts. He observed the children within four different groups to allow him to see the affect of certain variables on their behaviour. He used a ‘model’ to act aggressively towards a blow up doll in a variety of scenes including both live and filmed models. He then observed the children’s behaviour towards the doll after they had witnessed the ‘model’ behaving violently. His results showed that exposure to these displays of aggression by both types of models led to aggressive behaviour and highlighted that there is a key link between the media and children’s behaviour. Human behaviour can be influenced by seeing violent acts, however the result from the study observed that it depends on the gender of the child and who has performed the violent act, for example male, female, cartoon or human (Oates, 2010, p. 110 & 111).

Bandura et al study is one of the first experiments to measure the effects of media on behaviour. There is a strong correlation between the amount of aggression a child shows and what violence they have just witnessed. However there are reasons why observing a correlation can not always show the correct results. A correlation doesn’t inform us of what the direction of effect may be. Instead of a child acting violently because of what they have seen, it could be that they were already an aggressive child and were seeking to watch violent content or play violent online games. A correlation also doesn’t tell us if there is a third factor in the behaviour. A child could be at home with a violent parent and violent videos may be easily accessible to them. Here the environment at home could account for both the aggressive child and the exposure to the media content (Oates, 2010, p.120 & 121).

Friendships are an important influence on behaviour, this can be in both a positive and negative way. Those first friendships formed in school can be very important and influential in the way children experience their start to school life. Throughout life friends can influence children and adults in the way they behave as peer pressure can lead to good and bad experiences. For example if a person is friends with somebody who smokes or takes drugs, they may feel that they have to mimic this action as well to stay in the specific group. Research by Kim McLeod has shown this to be the case and that the friends humans make influence development and behaviour.

McLeod et al decided to study the influence of friends on smoking behaviour. To do this they studied sets of twins, one of who smoked and one who didn’t. They looked to see if it was their friendship groups that caused them to smoke or in the others case not to smoke. McLeod et al found that friends do influence the decision to smoke. The reasons given for smoking was for social mobility, for example to make friends with certain groups or to gain a rebellious image. They also found that as with the smoker twin, the non smoker was aware that the role of smoking can create a certain social image and personal identity (Bronlow, 2010, p.256 & 257).

Gonzale et al studied friendships in both collectivist cultures and individualistic cultures. The friendships built in collectivist cultures tend to be based on values i.e. concern for each other and peaceful relationships and individualistic cultures where they are focused on individual goals and achievements. Gonzale et al studied the relationship between teenagers in Canada and Cuba to compare the different types of friendships. He asked nearly six hundred teenagers between the two countries to write an essay about the qualities they look for in a best friend of the same gender.

What he found was that both cultures looked for loyalty and acceptance but the Cuban essays focused more on who the person was and having a close bond with them. Whereas the Canadian essays were more focused on the sharing of interests or social interaction. Although the results showed what Bandura et al thought, studies since have not brought the same results and as a result suggest that concepts such as collectivism and individualism are sometimes too general when trying to understand the sometimes subtle influence culture can have on human behaviour and social skills (Bronlow, 2010, p. 258, 259, 260 & 261).

Whilst a lot of the way we behave and perform is to do with both peer pressure and influence, some of it is out of our control and not down to the environment in which we live. People who suffer from a stroke perform in different ways because of what is known as aphasia, a breakdown in speech. This involves broken connections between language, meaning and production, affecting speech, writing, reading and processing numbers. Which connections that have been damaged is different for everyone. Stroke patients are vital when providing valuable understanding between the brain and psychological functions (Toates, 2010, p. 315).

The brain has the ability to recover from a stroke due to the plasticity of it, it can create new pathways following a stroke, almost like it is being reprogrammed. With the help of therapy courses the brain has the ability to adapt. A therapy called MIT, melodic intonation therapy can help build a patients confidence and realise their strengths and use these to adapt to their damage and improve the recovery process. Once a person has had a stroke they never fully recover from it as it damages brain tissue that can not be regenerated. The brain has to become more alert using different regions that have always been there and do have the connections, they just need to become more efficient (Film 3: Researching language impairment (2010) ).

To conclude, there are various environmental factors that effect human behaviour and performance. The television children watch can have an impact on whether they behave well or not, but sometimes the media is just an extra influence to an aggressive or violent life that already exists for that child. Correlations are not always as black and white as they may seem and there may be more to the reasons behind the aggressive behaviour. When looking at the influence friends have on our behaviour it is important to look at all cultures. All across the world people make friends every day, they try to impress these friends and fit in with groups they want to be in.

These environmental facts have a great influence on whether children and even adults do well in life, at school, work and personal lives. In some cases, such as patients who have suffered from strokes, the environment in which we live isn’t always the cause of human behaviour or performance. In the case of stroke patients the cause for their performance is because of biological reasons and with the help of therapy groups they can improve and help re direct their brain. The environment plays a large part in human behaviour and with out therapy groups patients wouldn’t be able to recover as well, or in some cases at all.

Role of environment in human behaviour. (2016, Mar 31). Retrieved from https://studymoose.com/role-of-environment-in-human-behaviour-essay 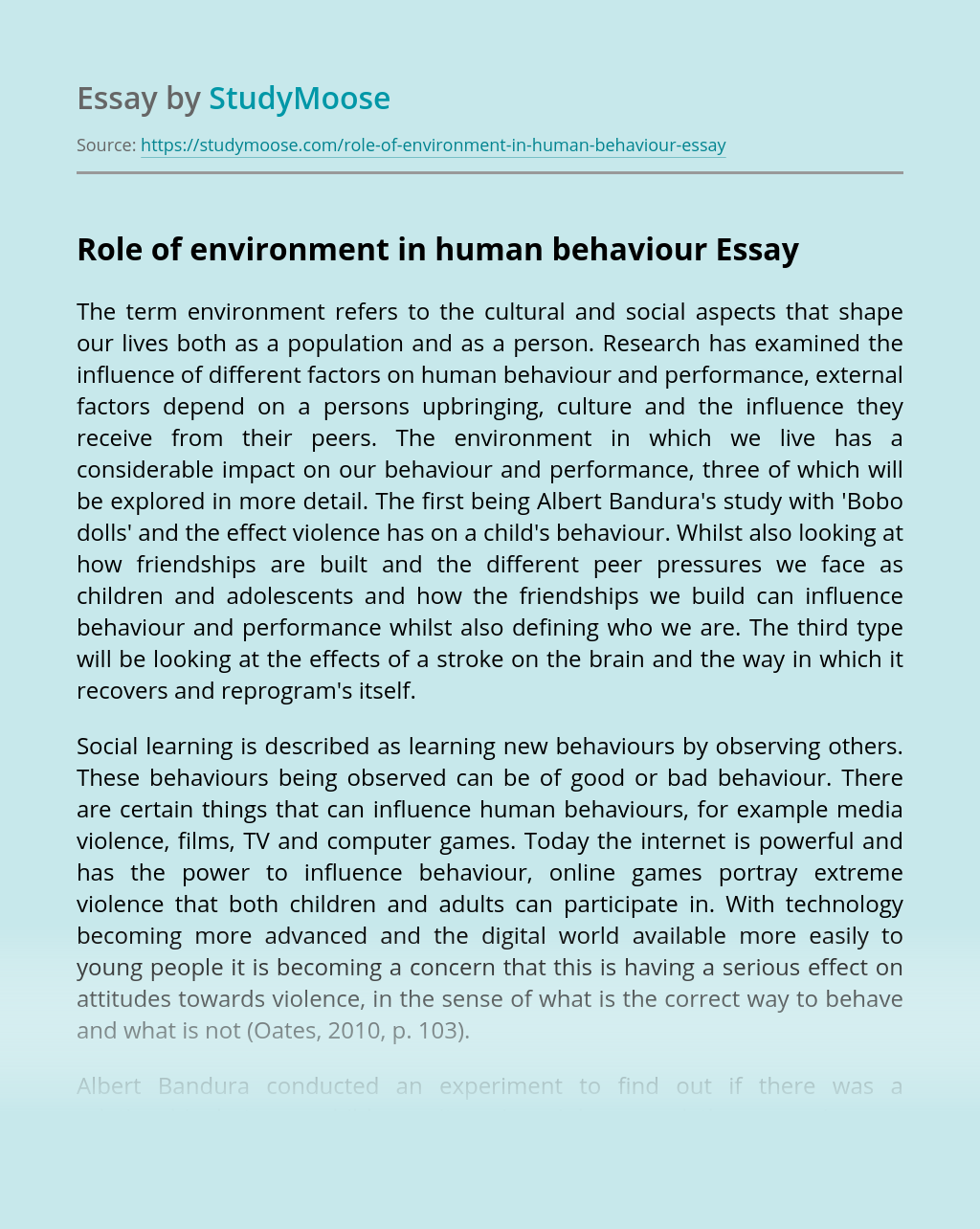