Human consumption: and its effect on the environment

Don't use plagiarized sources. Get your custom essay on
“ Human consumption: and its effect on the environment ”
Get custom paper
NEW! smart matching with writer

THE POSITIVE AND NEGATIVE EFFECTS OF HUMAN CONSUMPTION ON THE ENVIRONMENT

As mentioned earlier, there are many ways in which the environment is affected negatively by humans. One of these ways is through pollution. Pollution is basically regarded as unwanted substances that are harmful and contaminating the environment. Pollution is a very important issue when addressing the environments and its factors. There are various types of pollution, such as; air pollution, water pollution, land pollution and others. Air pollution is when there are unwanted, harmful substances in the air which have poisonous effects. These substances are very dangerous and when ingested could cause diseases such as cancer and bronchitis, which are deadly to both man and animals alike. “Pollutants are harmful chemical or physical substances released into the atmosphere, a water source, the soil or a component of the biosphere” (Saier, 2006:205) Particle pollutants when released in the air are very lethal, and could cause severe damage to the human body.

Air pollution does not only affect humans but it also affects the environment, for example, the depletion of the ozone layer is caused by harmful toxins that are released into the air. Water pollution however, is the contamination of water bodies in the ecosystem such as rivers, lakes, oceans and others. This mostly occurs, when pollutants are released into the water bodies and this could be very dangerous to man, animals and other living creatures in the environment. Water much like air, is very needed in other for the environment to be balanced. Another example of pollution is land pollution which is the deposition of solid or liquid waste material on land. This is also very harmful to the environment, especially when the garbage disposed is not separated into re-usable and recyclable waste.

Lands that are contaminated as a result of pollution are known to be very problematic to the human respiratory system. Pollution is a very serious matter that needs to be taken into further considerations, especially since it is done mostly by humans. There is no question that humans are incapable of destroying the environment and although a lot has changed in the generation, much has not. Humans still contaminate their air, water supplies and land by disposing hazardous materials and thereby destroying natural habitats.

It is important we take the matter of pollution seriously and properly take care of our environment, because we still continue to populate the earth at an increasing rate. (Pierce et al., 1998) There also some positive factors of human’s in our environment. These positive effects are very beneficial to the environment as it properly sets it in balance. One of the ways in which humans are impacting the environment positively is by protecting endangered species. Nearly most endangered species are now being bred in protective areas. Species such as the Chinese giant pandas is an example of endangered species that are carefully being bred in protective areas to keep them from going to extinct.

Overconsumption of natural resources has become a growing trend, especially in the industrialized nations. Overconsumption which is the act of using something to the excess is mostly done in western industrialized nations. “The necessity of preventing environmentally disrupting effects of affluent consumption in modern industrial societies has been recently addressed in a vast body of literature on ‘sustainable consumption’” (Cogoy, 2010:460)Natural resources such as materials, water and energy are very essential in the environment because they are the basis of our existence on earth. These resources are gradually decreasing due to humans’ constant consumption of these resources. Our climate is changing, species are becoming extinct, fish and forests are shrinking due to the damages that are imposed on our environment by humans. “..Overconsumption of natural resources is portrayed as a major threat to the sustainability of the world’s environmental systems.” (Brown et al., 2000).

Overconsumption which is regarded as the excessive used of goods and services is perceived as a means of personal happiness, status and success. However, in an environmental context, it is the excessive use of natural resources. It is known that humans today extract and use more 50% more natural resources than only 30 years ago. This consumption from humans, is a way of trying to aspire to achieve happiness through the use of goods produced from materials that are deemed “plentiful” and resourceful. (The European Environment [SOER], 2010).

There are ways in which we can avoid over consumption of natural resources in order to continue to thrive on earth. These ways include; changing our lifestyles and making it more sustainable so that we are able to protect our ecosystem and natural resources. It is important we characterize the problem of overconsumption and start a debate about resource use and its environmental impacts around the world. If humans were to continually consume resources wastefully, in order to follow self-interested motives, then natural resources in the environment would be reduced and future consumption will be undermined and resources are very likely to slowly deplete.

Asserting that “human influence on the planet has increased faster than human population,” Joel Cohen elaborated on the concept of human carrying capacity. Though carrying capacity is ultimately determined by natural constraints, Cohen stressed the role of human choices about lifestyle and consumption in determining how many people the earth can sustain within those constraints. Emphasizing the role of economics, Donald Ludwig contended that the real problem with human population growth is not biological, but societal. Ludwig asserted that a fundamental conflict exists between economics and ecology; economists believe growth to be essential, leading to increased consumption, while ecologists say growth is inherently limited.

Reaffirming Ludwig’s opinion about the importance of economics, William Rees introduced the concept of the ecological footprint, a model that puts the economy inside the ecosphere, intrinsically imposing limits on growth based on availability of resources. The ecological footprint recognizes the interplay of economics and ecology by measuring not just the natural resources a place uses of its own, but those consumed from other countries. Though it is Gretchen Daily’s opinion that “people have difficulty looking beyond their own discipline for solutions,” she stressed the importance of crossing both societal and economic boundaries in exploring the issue of human population growth. Daily believes that not only must scientists cooperate with others, but cooperation within the sciences is essential; scientists worldwide must begin to share information.

Human consumption: and its effect on the environment. (2016, Sep 19). Retrieved from https://studymoose.com/human-consumption-and-its-effect-on-the-environment-essay 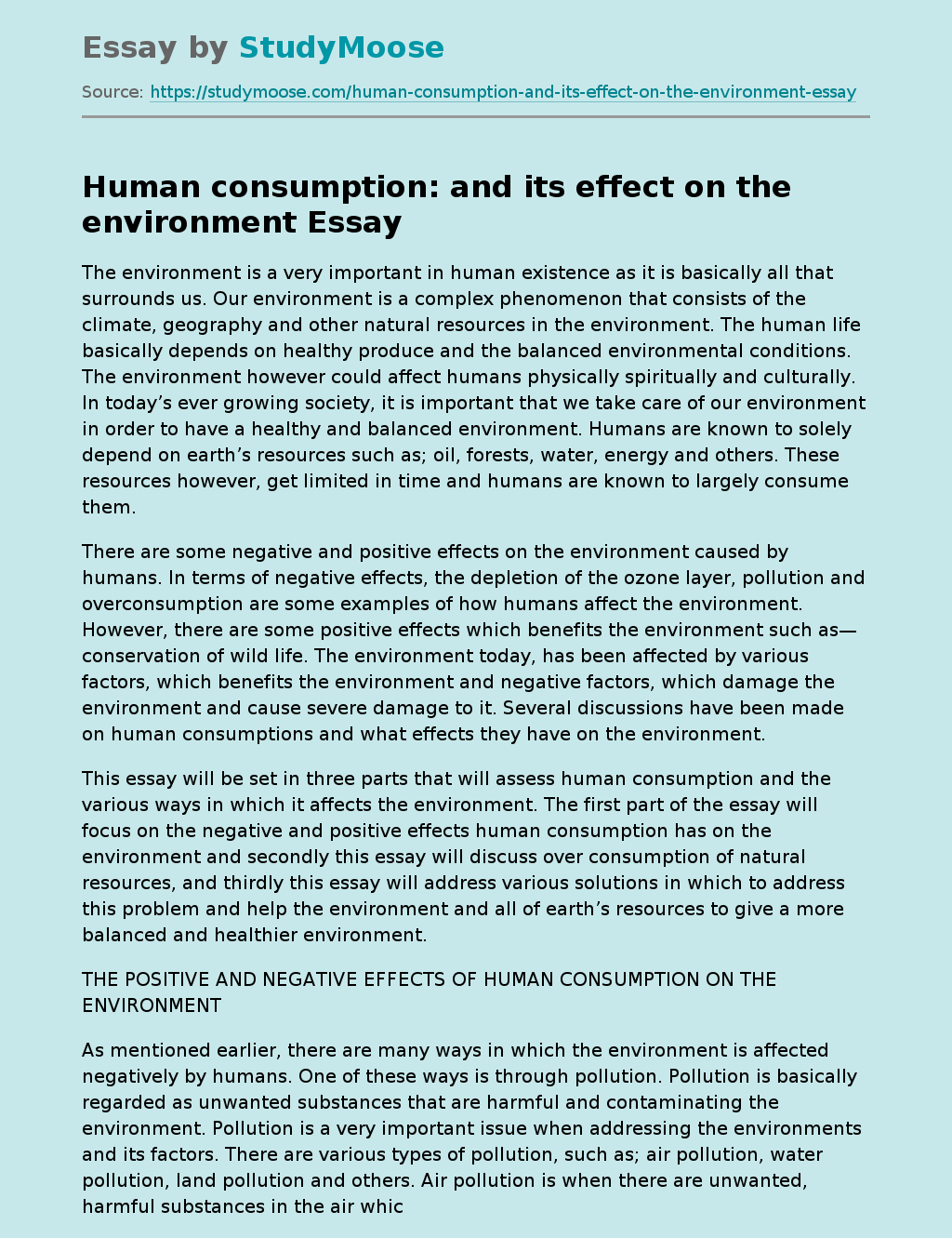