Organizations are complex systems which rely on people, structures and technology to achieve their goals and objectives. They are created to serve the needs of the societies or communities in which they operate and are influenced by both their internal environment (culture) and their external environment. As defined by Robins “an organization is a continuously co-ordinated social unit of two or more people that functions on a relatively continuous basis to achieve a common goal or set of goals” (Robins 2005).

Behaviour on the other hand, he defines simply as “the actions of people (Robins 2005).

Don't use plagiarized sources.
Get Your Custom Essay on Organizational Behaviour Just from $13,9/Page

Organization behaviour (often referred to as OB) is the behaviour (actions) of individuals and groups within organizations and the interaction between organizations and their external environment. It constitutes a behavioural science field of study that borrows its core concepts from other disciplines, principally psychology, sociology, social psychology, anthropology and political science (Coffey, Cole and Hunsaker, 1996).

The Goals of Organizational Behaviour
For organizations to be effective (doing the right things) and efficient (doing things right), those persons (managers) charged with the responsibility of planning, organizing, directing and controlling the affairs of organizations must have an understanding of and appreciation for the dynamics which result when people and technology are brought together for a common purpose.

They must be able to:

1.Describe systematically how people behave under a variety of conditions.

2.Understand why people behave as they do.

4.Control (partially) some of the human activity at work.

This essay seeks to demonstrate why OB is a multi-disciplinary subject by examining the contribution made to this field of study by disciplines such as: 1.Psychology. Psychology focuses directly on understanding and predicting individual behaviour.

2.Sociology. Sociology studies how individuals interact with one another social systems.

4.Anthropology. Anthropology studies the relationships between individuals and their environment and how person or a group adapts to its environment.

Origins of Management and Organizational Behaviour

Organisational behaviour is one of six major approaches (theories) of management. It is preceded by scientific management, the general administrative theory and the quantitative approach and is the fore-runner to the systems and contingency approaches, (Stephen R Robins and Mary Coutler, Management 11th ed. Pearson Prentice Hall, USA 2005, pg 27). Management, practices have been around for centuries.

However, it was the onset of the industrial revolution of the eighteenth and nineteenth century, characterised by the demise of the cottage industry and the introduction of factories, that emphasised the need for a scientific approach to management. This approach was born out of the idea that individuals can be taught to manage. The most noticeable theorist in this regard is Fredrick W Taylor who is considered by most as the founder of scientific management.

His focus was at the operational level of management and his best two works, shop management (Taylor 1912) and the principles of scientific management (Taylor 1919) are concerned with improving the tools and methods used by the workers. His experiments led him to develop concepts relative to production, time and motion study, fatigue, worker durability, cost and work measurement.

Taylor’s main focus was on finding one best way to do any job. Although his work emphasized the technical rather than purely human side of management, he did point out the role of specific incentives in motivating workers and the value of specialization. Perhaps Taylor’s greatest contribution to the study of management and organizational behaviour was his approach of applying the scientific method to industrial problems. (Colonel Samuel H Hays and Lieutenant Colonel William N Thomas,Taking Command, Stackpole Books, USA, 1976, p 93). This scientific approach has been adopted by several theorists and applied to the filed of organizational behaviour.

The Contribution of Psychology to the field of OB

The psychological contribution to OB focussed on understanding individuals and predicting their behaviour, and using that knowledge within organizations to improve the organization’s competitive advantage. Psychological studies focussed on areas such as perceptions, learning, personality development, needs and motivation.

Of these areas motivation is the over arching factor and most important to the organizational setting because it deals with an individual’s willingness to work. Motivation is defined as the conscious decision to direct effort toward one activity more than others (Coffey et. al). Of course one cannot speak of motivation unless they mention Abraham Maslow and “his hierarchy of needs” theory. Maslow hypothesized that within every human they exist a hierarchy of five needs:

1.Physiological needs – basic needs such as hunger, thirst, shelter and sex. 2.Safety Needs – includes security and protection from physical and emotional harm. 3. Social needs – such as affection, belonging, acceptance and friendship. 4.Esteem Needs include internal esteem factors such as self respect, autonomy and achievement and external esteem factors such as status recognition and attention. 5.Self actualization. The drive to become what one is capable of becoming; includes growth, achieving one’s potential and self fulfilment.

Manslow later added a 6th need to his hierarchy that of self-transcendation – the need to transcend one’s self and serve a purpose that is greater than one’s own purpose. Maslow’s main argument is that man is driven to satisfy these needs sequentially from 1 to 6 and as a lower need is satisfied he is motivated to satisfy the needs at the next higher level.

Unlike Douglas McGregor who reasoned that managers typically hold two distinct assumptions of workers behaviour and these views determine how they manage those individuals. He called these assumptions Theory X and Theory Y assumptions. Theory X assumptions postulates the view that workers are generally lazy, do not like to work and have to be rewarded, persuaded, punished and controlled in order to produced.

His Theory Y assumption however, is more in keeping with Manslow’s philosophy. Theory Y views workers as motivated by higher order growth needs and managers should enable persons to act on these needs and allow them to grow in their jobs.

McGregor’s concepts were not the product of empirical research and have not been validated. They mainly serve to make managers reflect on how their assumptions of people influence their behaviour towards them (Coffey et.al, Management and Organisation Behaviour, 1sted, USA, Austin Press, 1994, p 110).

Sociology. The main contribution in this area is the study of organizational culture. Culture may be defined as patterns of learned behaviours that are transmitted to and shared by members of a society (Coffey et al p 36). The sociologists viewed the organization as a social system very similar to a society with its own culture, value system, norms and systems of socialization. The approach provides the framework for understanding and managing change within organizations.

Social Psychology. On the other hand focuses on how individuals behave in groups and how groups behaviour impact on organizations. The most noticeable contribution from the area of study was derived from information resulting out of the Hawthorne Studies. Those studies were undertaken at Western Electric Company’s Hawthorne works in Chicago between 1924 and 1932 by Elton Mayo. From the Hawthorne Studies, observers gained valuable insights into how individual behaviour is influenced by group norms. The group of workers determined the level of fair output and established norms for individual work rates that conformed to the output.

Political Science. This is a relatively new area of study in OB which investigates the use of power in organization. Robins define powers as a capacity that A has to influence the behaviour of B, so that B acts in accordance with A’s wishes (Robins Organizational Behaviour, 11th ed p 390). He goes on to say that, this definition implies a potential that need not be actualized to be effective (perceived power) and a dependency relationship (psychological power). This discipline views the organization as a political system and investigates the types, sources and use of power within organizations and applies that knowledge to organizational behaviour.

Organizational Behaviour. (2016, May 31). Retrieved from https://studymoose.com/organizational-behaviour-2-essay 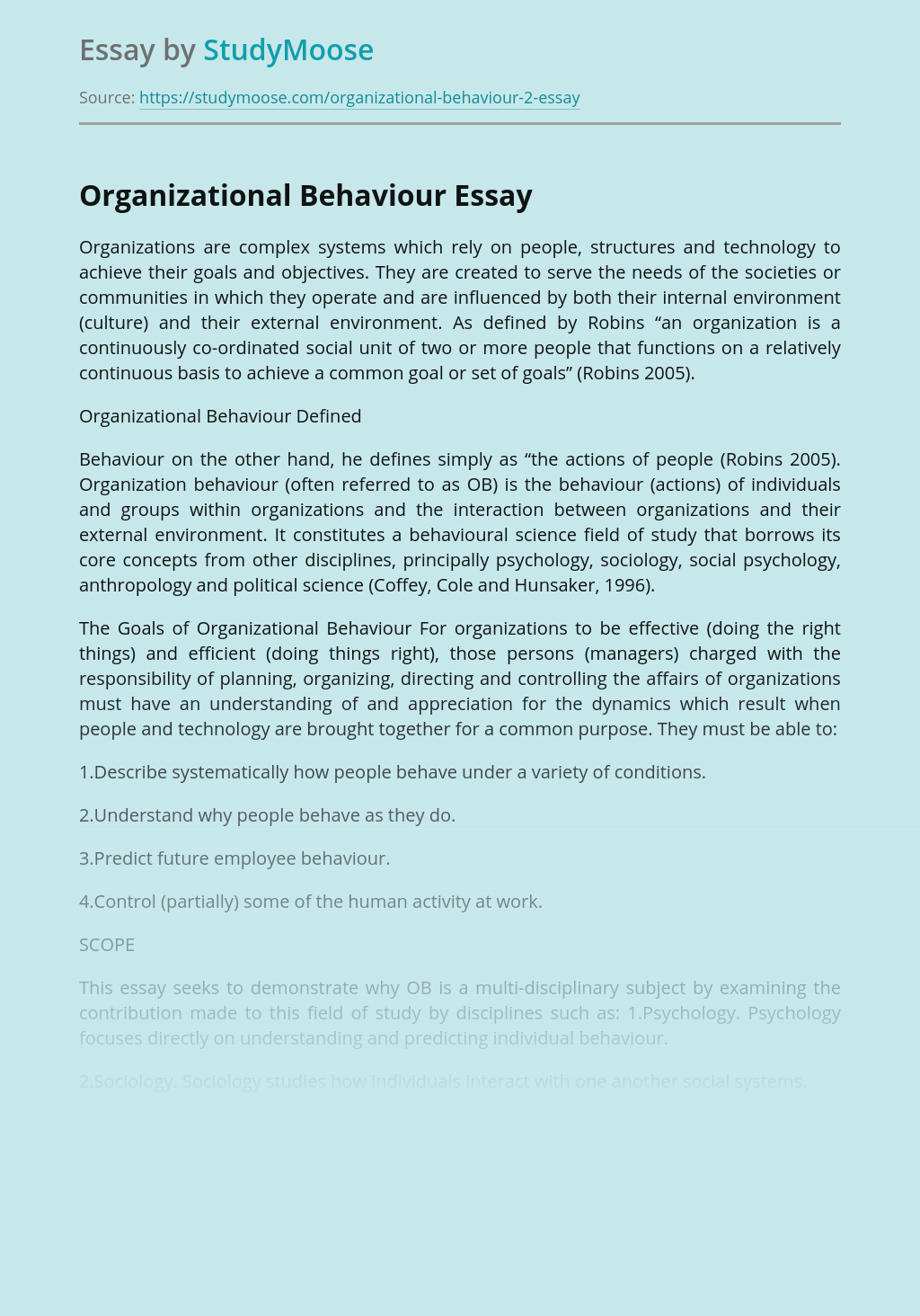 Socialisation is the lifelong process by which human behaviour is shaped through experience in social institutions (e.g. family, which is a crucial factor in primary socialisation). Through socialization, individuals learn the values, norms (formal and informal rules), and beliefs of a given society. In considering the nature of the self, it is necessary to include a...

Conflict is not confined at the individual level alone but is manifesting itself more and more in organizations. Employees have become more vociferous in their demands for a better deal. Various departments in an organization face a situation full of conflicts due to a number of reasons like goal diversity, scarcity of resources or task...

View sample
Get Essay
Advantages and Disadvantages of the Behaviourist Approach

Attitudes, or a person’s internal/mental beliefs about a specific situation, object or concept can greatly influence behaviours. From simple, nonharmful situations such as the choice to not wear orange because you do not like the colour to much more destructive attitudes such as racial prejudice, attitudes can lead our thoughts and actions. Social influences can...

Many business use the CIPD Human resources profession map as it sets out what HR practitioners need to know, do and deliver at all stages of their career to be effective and successful. It sets a benchmark for HR excellence for the individual and the HR function. The map focuses on the knowledge, activities and...