Importance of costs to economistsTo be able to decide on the appropriate price and output required to maximise profits, managers need a detailed understanding of the level of costs at different levels of output and how costs might change over time.Cost is defined as “The value of the inputs needed to produce any goods or service” (Black, Hashimzade and Myles, 2013, p.86) Short run costsAverage cost (AC) : “Cost per unit of production (Fixed+Variable): AC=AFC+AVC” (Sloman, Garret and Wride, 2015, p.

Don't use plagiarized sources. Get your custom essay on
“ Importance of costs to economistsTo be able to decide on the appropriate ”
Get custom paper
NEW! smart matching with writer

141)Marginal cost (MC): “Extra cost of producing one more unit, that is the rise in total cost per one unite rise in output: MC= ”TC/”Q” (Sloman, 2001, p.91) Average and marginal costs MC35 AC AVC AR=D AFC 7 Source: (Adapted from Sloman, Garret and Wride, 2015, P.143) Relationship between marginal and average costSloman (2001, p.125) states that as long as new units of output cost less than the average, they must pull the average cost down.Therefore, as illustrated in the diagram above, if MC is greater than AC, AC must be rising and MC crosses the AC at its minimum point.

This is because of a simple mathematical relationship between the marginal and the average(Begg and Ward, 2009, p.55).For example, assuming our average examination is 75, our next exam is our marginal exam.If we gain a higher score, the average will increase.In the opposite case, the average will move down.Knowing average total cost is critical in making pricing decisions, as any price below average total cost will result in a financial loss.

In a similar way, marginal costs are a vital part of economics because they help to provide the relevant measurement of costs and benefits at a specific level of production. It helps in determining the level of output which is more profitable for running concern and the most profitable relationship between cost, price and volume in the business and decide whether produce or not.Sloman, Garratt, Guest and Jones (2016, p.168) point out that fixed cost have to be paid even if the firm is producing nothing at all.Providing, therefore, that the firm is more than covering its variable costs, it can go some way to paying off these fixed costs and therefore will continue to produce.Consequently, the firm will shut down if it cannot cover its variable costs.This will be where the price is below the AVC curve as we can see in the diagram above (shut down point).Opportunity cost : rational choices and scarcityOpportunity cost: “The cost of an activity measured in terms of the best alternative foregone” (Sloman, Wride and Garratt, 2015, p.11) Opportunity costProduct A8 x 1 1 y 2 z 10 Product B 7 Source: (Sloman, Wride and Garratt, 2015, P.15)According to D.Begg (2000, p.3), economics is the study of scarcity.When resources are scarce, society can get more of some things only by deciding to have less of other things, having to choose between different outcomes.Sloman, Wride and Garrat (2015, p.11) state that choice involves sacrifice.For example, the more food a nation produces, the fewer resources will there be for producing other goods.This sacrifice of alternatives in the production (or consumption) of a good is known as its opportunity cost.Economists often refer to rational choices.This simply means the weighing up of the costs and benefits of any activity against its opportunity cost.The concept is useful in the determination of the relative prices of different goods.For instance, if a given amount of factors can produce either one product A or three products B, then the price of product A will tend to be three times equal to price of product B.Begg, Vernasca, Fisher and Dornbush (2014, p.3) point out that the concept of opportunity cost is one of the most important concepts in economics analysis.It provides the direct link between scarcity and choices.Faced with scarcity, we must choose among alternative activities.As we can notice in the diagram above, if we chose to produce product A, we are spending resources in that product.We could have spent this resources on producing product B.Therefore, by producing more of a product we sacrifice part of the other.In making choices, we need to take into account the opportunity that we are sacrificing.Long run average total costAverage Total Cost: “Total cost (fixed plus variable) per unit of output (ATC): AFC=TFC/Q” (Sloman, 2003, p.123) Average total cost in the long runATC LRAC Economics of scale Diseconomies of scale Constant returns to scale Minimum efficient scale (MES) 150 200 Quantity Source: (Adapted from Mankiw and Taylor, 2014, p.145)According to Gillespie (2016, p.211), the long run average cost (LRAC) curve shows the lowest possible cost per unit for any level of output when all factors of production are variable.In the long run, managers are able to change all their resources to find the optimal combinations and the firm is able to reduce its unit costs when it produces more, then this means that the firm is experiencing internal economies of scale, as shown in the diagram above.Parkin, Powell and Matthews(2011, p.234) state that economies of scale are features of a firmґs technology that make average total cost fall as output increases.When economies of scale are present, the LRAC curve slopes downward, as illustrated in the graph.A firm is able to change its resource allocation in order to experience economies of scale.In the long run, for example, a firm is able to change the level of equipment and can find the optimal level of machinery and produce cheaply.Therefore, the unit costs have fallen as the firm has increased the scale of production and becomes more competitive.According to Parkin, Powell and Matthews (2011, p.235), a firmґs minimum efficient scale (MES) is the smallest quantity of output at which a long run average cost reaches its lowest level.The MES plays a role in determining market structure.In a market where MES is large relative to market demand, only a small number of firms can make a profit.In the opposite case, its suggests that many firms could operate efficiently and the market may be much more competitive.Conclusion:Our analysis of production in both the short and the long run is clearly of great importance to our analysis and understanding of the firms.Nevertheless, this does not imply that large firms always have a productive advantage, as either scale economies might prove to be relatively insignificant in many industries.Understanding the conditions and variables that determine the generation of revenue and the incurring of costs, we can achieve a real understanding of the factors influencing the viability of the firms.

Importance of costs to economistsTo be able to decide on the appropriate. (2019, Aug 20). Retrieved from http://studymoose.com/importance-of-costs-to-economiststo-be-able-to-decide-on-the-appropriate-essay 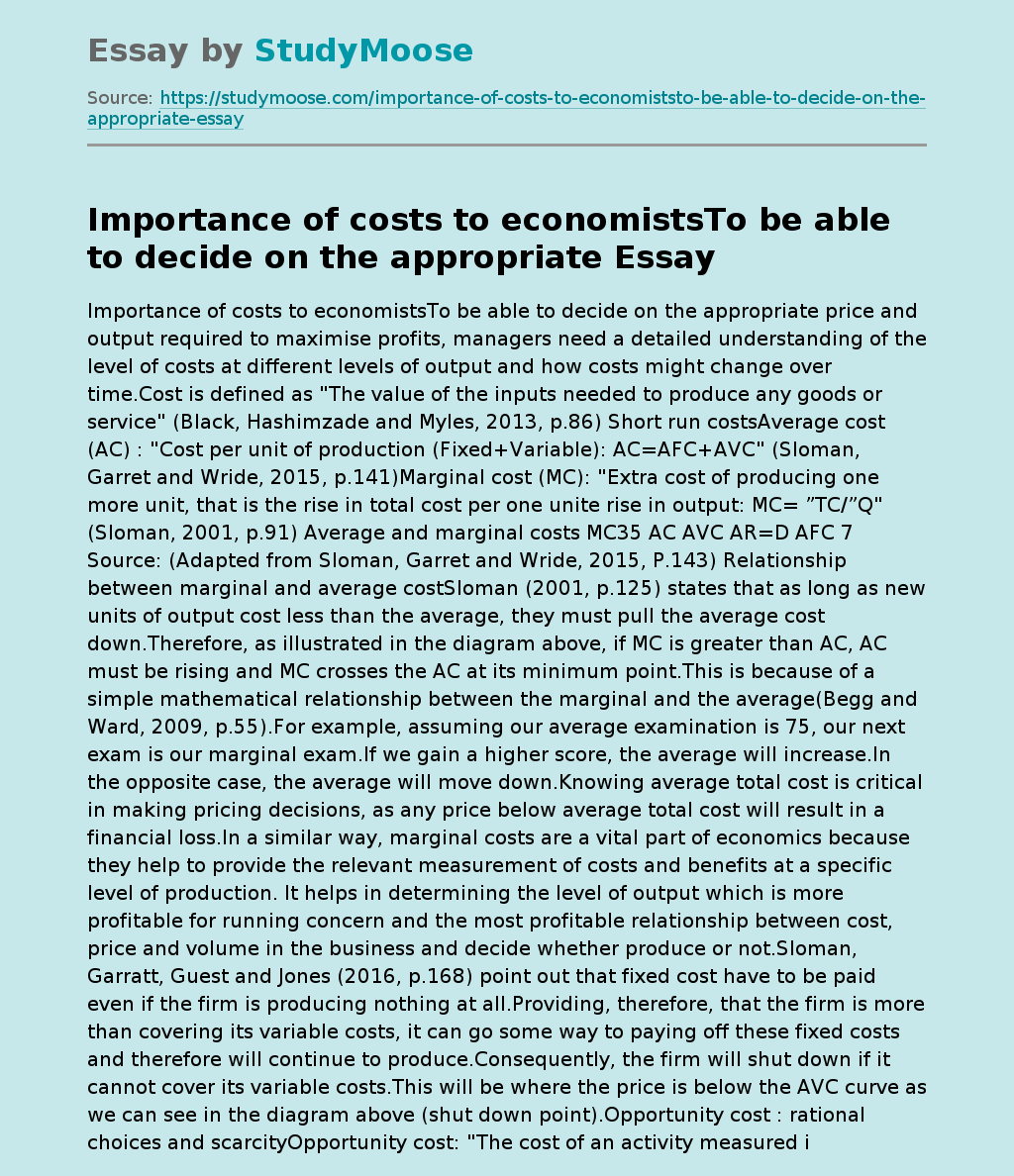