Importance of Biodiversity Biodiversity is considered as the “variety of life” since it involves the different plants, animals and micro-organisms, their genes, and the ecosystems of which they are a part. Etymologically, the word is a fuse of “biological diversity” which, in lay-man’s terms, means the different life forms found on Earth. Hence, it is almost a paradox to say that this diversity also leads to an interconnection among the species on Earth.

Don't use plagiarized sources.
Get Your Custom Essay on Importance of Biodiversity Just from $13,9/Page

The importance of biodiversity especially lies in this stake.

Biodiversity ensures that each organism will have its own niche in the ecosystem. Every species, however small it may be, has its own role to do in the ecosystem, and every role that a particular species does will have an effect on the entirety of the bionetwork. The combination of the roles of the different organisms enables the ecosystem to prevent and recover from a variety of adversities. As Shah (2008) has written, “while there might be ‘survival of the fittest’ within a given species, each species depends on the services provided by other species to ensure survival” (n.

p. ). Indeed, there is a mutual use among each species. Loss of Agricultural Land In early settlements, agriculture was one of the soundest means of production of many societies. Farming and crop-growing were essential in sustaining human and animal life. Yet, it was industrialization that affected the agricultural terrestrial resource. Because of industrialization, a lot of agricultural lands were transformed into engineering and manufacturing stations. Economic development required for a bigger space in which it would be able to progress.

Also, the increase in population caused massive relocation to the agricultural areas. These resulted in the continuing loss and degradation of habitats and their conversion to other uses, aside from which overexploitation of biological resources, loss of species and genetic diversity, pollution, and climatic change arose (Heywood, 1995). The loss of agricultural lands may be reduced if there will be an alternative to the development schemes that encompass the transformation of these lands into residential or industrial sites. 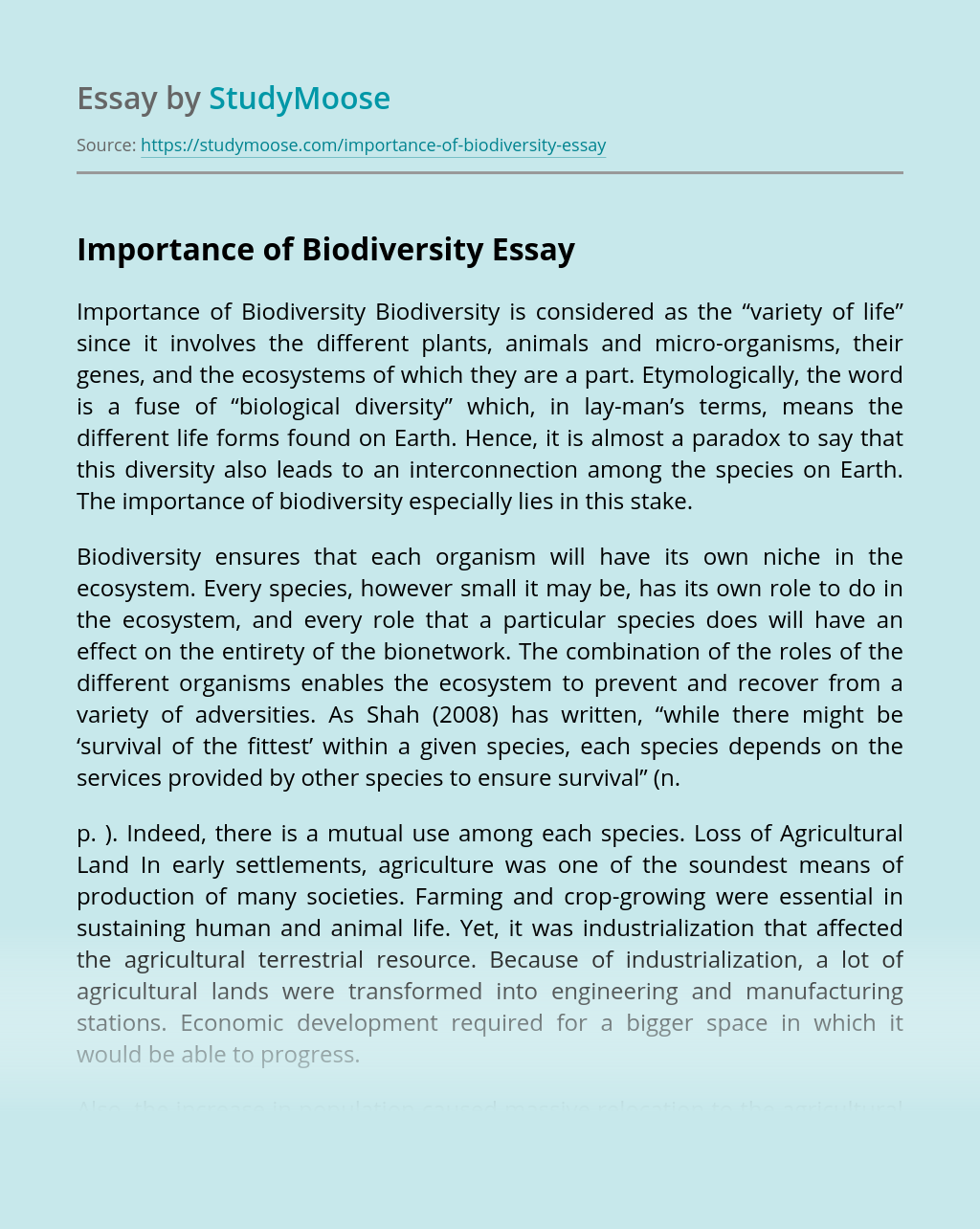 A Balanced Ecosystem - An Aquarium

Rate this post The term ecosystem describes both the living and non-living components of an area that interact with one another. All the components are inter-dependant in some way with each other. An ecosystem may be aquatic or terrestrial. In an aquatic ecosystem rocks are needed for shelter and plants provide oxygen for fish. An...

Rate this post Wildlife preservation is the practice of protecting threatened plant and animal speciesand their habitats. Among the goals of wildlife conservation are to ensure that nature will be around for future generations to delight in and to acknowledge the importance of wildlife andwilderness lands to human beings. [1] Many countries are government agencies...

Get Essay
Should Animals be kept in Zoos

Differences Between The Three Colonies in USA

Pros and cons of zoos

Rate this post The Con’s Personally I detest zoos only because I love nature and love to see animals in their natural habitat. It saddens me to see monkeys, seals, bears, etc., caged in or dolphins in what looks like fair-sized pools of water, but, when you consider the vast ocean that they belong to,...