The clearing of tropical forests across the Earth has been occurring on a large scale for many years. This process, known as deforestation, involves the cutting down, burning, and damaging of forests. If the current rate of deforestation continues, the world’s rain forests will vanish soon, causing unknown effects on global climate and eliminating the majority of plant and animal species on the planet. It would also change the water and oxygen levels dramatically, which would increase the global warming.

Don't use plagiarized sources. Get your custom essay on
“ Deforestation ”
Get custom paper
NEW! smart matching with writer

Deforestation is mostly experienced between the Tropic of Cancer and the Tropic of Capricorn especially in the Brazilian part of the Amazon, which covers 33% of the world’s rainforests.

“Save the greenery Enjoy the scenery Don’t cut our green friends Or it will be the end of all trends” First of all, many medicines come from plants. Most of the Amazon’s plants have yet to be discovered and catalogued, so we may lose valuable cures or vaccines that could have otherwise been used to fight illnesses such as cancer or AIDS.

These plants could save the lives of millions of people all over the world, but are lost as a result of the destruction of the rainforests. Secondly, the Amazon rainforest is sometimes called the “lung of the world” because its production of over 1/4 of the world’s oxygen makes it possible for us to breathe. The faster we eliminate forests, the closer we get to our own impending doom. Obviously, this behaviour is suicidal, and must be stopped.

A lot of land in the rainforest is given to landless people by the government.

Deforestation can cause many societal and environmental problems which can make our lives on earth even more challenging. Some of these challenges include: loss of biodiversity, the destruction of forest- based societies and climatic disruption. According to the 1992 United Nations Earth Summit in Rio Janeiro, biodiversity may be defined as, “the variability among living organisms from all sources including, inter alia, terrestrial, marine and other aquatic ecosystems and the ecological complexes of which they are a part.

Although tropical forests Cover only six percent of Earth’s land surface; it is alleged that they contain between 70% and 90% of the world’s entire species. It has been documented that as a result of deforestation, we have been losing between 50 and 100 animal and plant species each day. Many of these species that are now on the brink of extinction are of significant importance to humans, especially in the area of medicine. Continued obliteration of our various plants and animals will ultimately lead to obliterating the cures for many of the diseases that afflict us today.

Additionally, the destruction of tropical forests will also lead to the destruction of tribal populations. Aboriginal people worldwide have had their land confiscated by governments and industries in the name of ‘development’. Even if forest dwellers are compensated for this loss, they are still left in shock by the invasion of industrial culture on their once simple lives. Soil erosion is another consequence of deforestation. Although these forests appear to be flourishing, the soils beneath are very poor.

The problem is that once forests have been cut down, crucial nutrients are washed out of the soil completely. This leads to soil erosion. When there are no trees to keep the soil in place, it dries and cracks under the sun’s heat. If the soil temperature exceeds 25 degrees centigrade, explosive nutrient ingredients like nitrogen can be lost, reducing the fertility of the remaining soil further. Moreover, rainfall washes remaining nutrients into rivers; as a result, replanting trees would not really help to solve the problems of deforestation.

By the time trees have matured, the soil might be completely stripped of important nutrients. The land would therefore become useless. The social effect of soil erosion can be quite disturbing. Those who settle into the forest regions are moved to move frequently due to soil erosion. They find fertile areas where they can cultivate. When these areas are no longer good for growing, they move to another area. Flooding is another serious impact of deforestation.

Clearing the forest considerably increases the surface run- off from rainfall, chiefly because a greater amount of the rain reaches the ground due to a lack of vegetation which would suck up the excess rainfall. In tropical regions where the forests are dense, flooding is not a serious problem because there is vegetation to absorb the rainfall. A problem occurs in areas where there is little rainfall. In order to avoid the disastrous effects of flooding, it is important that tropical forests remain dense and lush.

Global Warming occurs when there is an increase in the Earth’s temperature. This is due to the use of fossil fuels and other industrial processes, leading to a build up of ‘greenhouse gases’. In the Amazon, cattle ranching increase the build up of methane, a gas which can lead to global warming. The burning of trees, to quickly clear land for ranching, increases the build up of carbon dioxide, another gas which can lead to global warming. All this will eventually affect every single thing on this planet.

A build up of carbon dioxide causes a rise in temperature in the Earth’s atmosphere. This rise in temperature will cause the polar ice caps to melt, causing a rise in the sea level. This will cause problems for those living on low-lying land, especially in Bangladesh. Those living in Bangladesh are always experiencing floods, as the country lies on the delta of the River Ganges. Floods in Bangladesh are frequent, and nearly always kills some, while making thousands homeless. The floods are disastrous, and cost a lot of money. If global warming increases (by the deforestation of the Amazon), Bangladesh will eventually become totally flooded, and millions will die. The country will be totally subdued in water, and will not be seen above sea level, as it is already quite low lying. Being a poor society (LEDC) as it is, Bangladesh would not be able to cope with an increase in global warming

Deforestation of Colombia is a dangerous act to the environment. Colombia’s forests are the home of 55,000 plant species and 358 mammal species, 15 percent of the world’s primates. Currently, 1,000 plants species and 24 mammals’ species are threatened with extinction largely because of mass deforestation. Each year, a total of 1.5 to 2.2 million acres is lost to deforestation. At this rate, Colombia’s woodlands will be depleted in 40 years. Already one-third of this country’s original forest lands have felled. Colombia’s Pacific region consists of lush rainforests and contains most of the country’s natural resources.

Under Colombia’s ambitious plans to develop their economy, the area has become targeted for the extraction and exportation of natural resources on the last ten years. The scheme is known as Plan Pacifica. Under the plan, one hundred and sixty thousand hectares are destroyed each year for wood and paper or to make way for agro-industrial production of African palm. There has been a considerable drop in mangrove coverage with the installation of commercial shrimp farms, and massive sedimentation and mercury contamination in rivers has been caused by deforestation and uncontrolled mining. “Let’s split atoms… not wood.”

“God put trees for us to enjoy.. not to smoke”

The single biggest direct cause of tropical deforestation is conversion to cropland and pasture, mostly for subsistence, which is growing crops or raising livestock to meet daily needs. The conversion to agricultural land usually results from multiple direct factors. For example, countries build roads into remote areas to improve overland transportation of goods. The road development itself causes a limited amount of deforestation. But roads also provide entry to previously inaccessible—and often unclaimed—land. Logging, both legal and illegal, often follows road expansion (and in some cases is the reason for the road expansion).

When loggers have harvested an area’s valuable timber, they move on. The roads and the logged areas become a magnet for settlers—farmers and ranchers who slash and burn the remaining forest for cropland or cattle pasture, completing the deforestation chain that began with road building. In other cases, forests that have been degraded by logging become fire-prone and are eventually deforested by repeated accidental fires from adjacent farms or pastures. Nice & beautiful trees are bold & sweet they give us food to eat that’s why we are not weak. So grow more trees to live & maintain nature.

One group against this proposed development is the G7 group (a group of northern hemisphere nations) feel that is Brazil got rid of its rainforest then greenhouse gases and this would not only be catastrophic for Brazil but the whole world. This is why the G7 group has put up $340 million to stop the Brazilian development programmed, although it is worth $40 billion to the Brazilian’s to go ahead with the scheme. Because of this the Brazilian government issued a rebuke to the rest of the world “We cannot leave the local (Amazonia) Population living in a glass bowl just for the benefit of rainforest preservation”.

The G7 group isn’t the only group against the proposed development, scientists and environmentalists are also against the proposed developments and feel that the deforestation rate should be reduced from the already high rate it occupies. Many people are worried about the greenhouse gas emissions rising from the loss of trees and also the burning of trees, but these groups are also worried about the loss of habitats for the local wildlife and therefore the loss of wildlife. If reports are true, there could be only 5% of the wild, pristine Amazon left in 2020, this means that there will only be 5% of the natural wildlife left in this area. 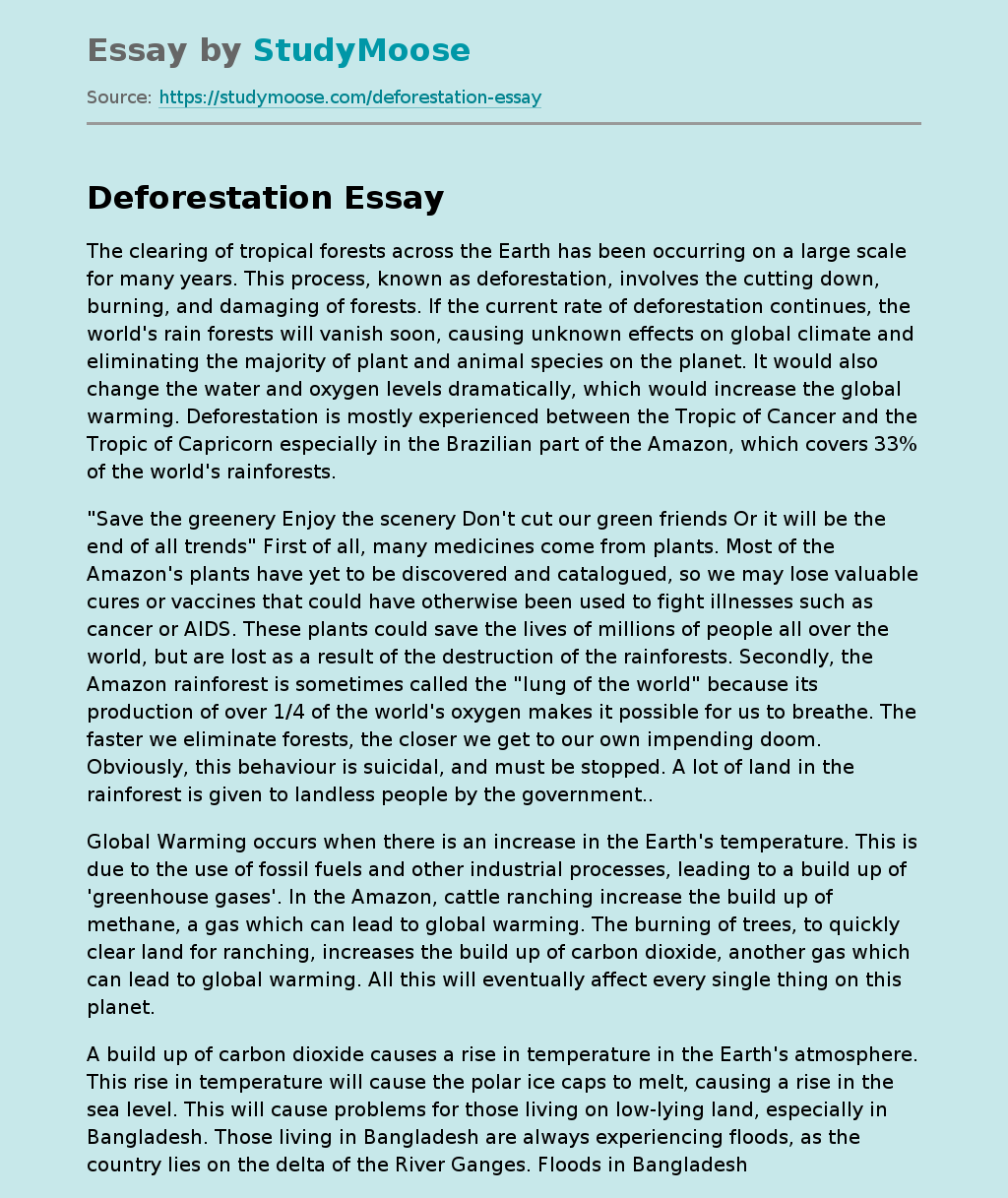