Hume and the Idea of Personal Identity

Hume considered the idea of identity to be both fictitious and perception based (Hume, 1739). His philosophy was that we as humans could only perceive, or imagine a concept of self based on various thoughts and images that we could see at any given time. But if Hume were to argue that Self existed, it would do so as a constant, unchanging element, of which we could be continually aware. Hume subscribed to the Bundle Theory in that he claimed the image of Self was dependent on a range of different variables, or perceptions, that were in a constant state of change.

Don't use plagiarized sources. Get your custom essay on
“ Hume and the Idea of Personal Identity ”
Get custom paper
NEW! smart matching with writer

Because of this change element, the concept of identity, which one would presume was unchanging, must be false. Kronqvist (n. d. ) suggested that in fact our perceptions of Self were not even based on bundles of perceptions, but rather simply perceptions in themselves. This is because perceptions are able to exist without the benefit of Self, but are in fact part of our imagination process, which lends itself to support Hume’s idea as the Self as fictitious.

Penelhum (1955) argues that Hume was not clear in his definition of identity or Self and believed that Hume was confusing the ideas of Self and identity, with self-concept.

The issue arises from Hume’s description of identity as being an unchanging object over the time. The use of the word ‘object’ in many cases would suggest something that is itself unchanging, when in fact as Penelhum (1955) points out, an object under philosophical definition could be something as intangible as the notes of music in a song; The notes themselves are all individually different, yet the song as an object stays the same.

Personally I agree with Penelhum that Hume was not aware of the more modern view of Self, and was indeed relating it only to the concept of the mind, as opposed to including elements such as personality, inherited traits and the impact of external forces on how we see and express ourselves. While there is much about us that changes as we move through life, there is, I believe, a core element in all of us, that distinguishes us from our family members, and others, and could be considered a concept of Self.

Hume and the Idea of Personal Identity. (2016, Sep 18). Retrieved from http://studymoose.com/hume-and-the-idea-of-personal-identity-essay 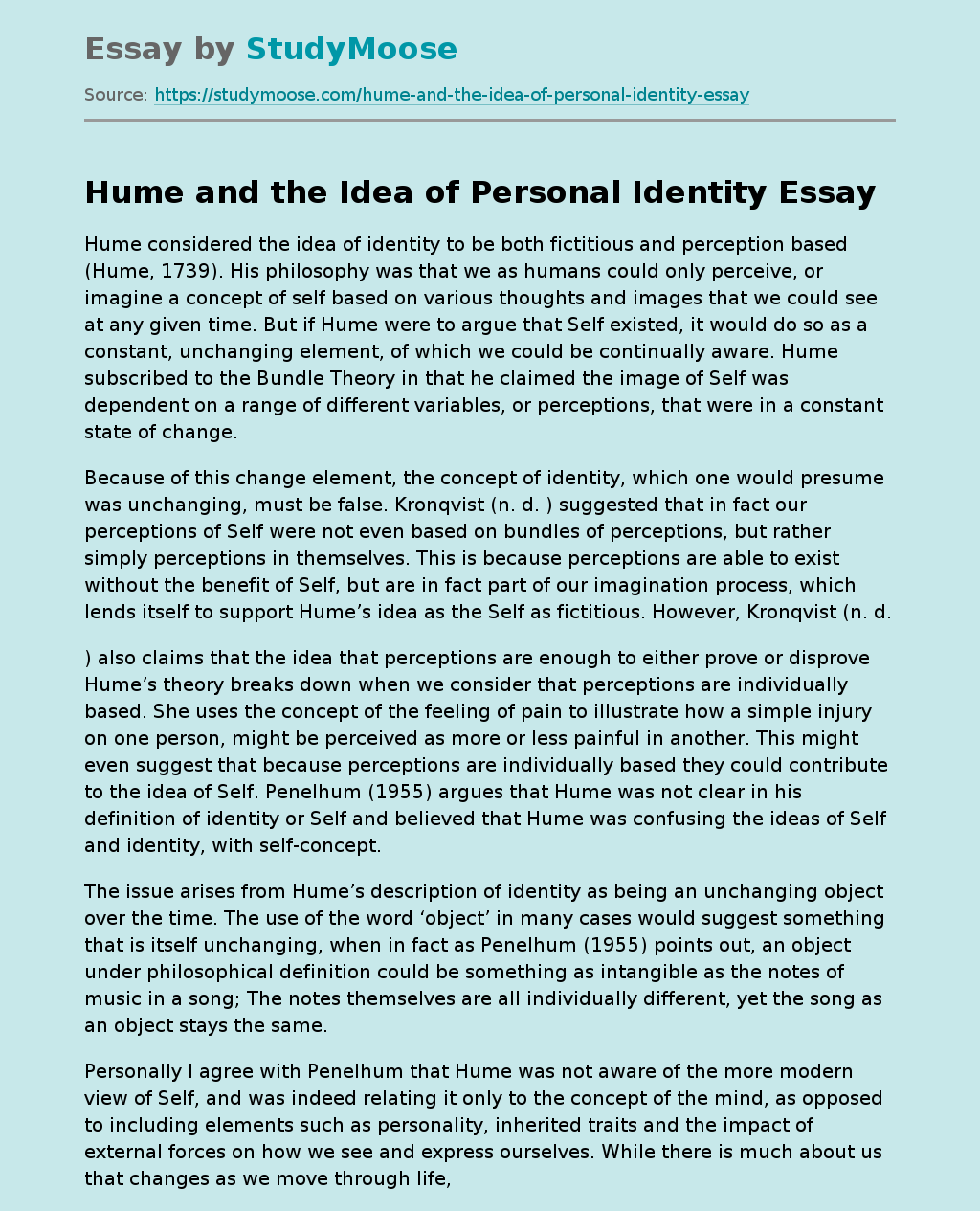