Genetic engineering is not a new feature. Almost everyone has either heard of or interacted with products that have been genetically modified to better suit its purpose. That being said, the same technique could be translated onto humans to further enhance natural attributes (e.g. strength, height, etc.). It would be the most practical to alter the genetic makeup on unborn humans. A lot of the weight falls onto programmers who needs to shoulder the responsibility. Thus, this brings up the question, “Is it morally permissible for computer programmers to help genetically modify human fetuses to surpass natural human capabilities?”.

The two competing answers to this ethical question is that it is permissible, or it is not permissible. After careful research, I have concluded that it is not morally permissible for computer programmers to help genetically modify human fetuses to surpass natural human capabilities.

An implication to my answer to the ethical question is that it will prevent a major societal problem that would result in too much responsibility on each individual to be held accountable for his or her characteristics if human genetic engineering was morally permissible.

In this paper, I will analyze both sides of the ethical question as well as referring to the Association for Computing Machinery (ACM) code of ethics in order to support my decision. I will also explain more in depth the major social implication of my answer.

The first competing answer for the ethical question is that it is morally permissible for computer programmers to help genetically modify human fetuses to surpass natural human capabilities. For the sake of this argument, we will assume that human genetic engineering is widely available, safe, legal, and voluntary. As stated in an article on a biomedical journal website, “Clearly, one of the greatest benefits of this field is the prospect of helping cure illness and disease in unborn children. Having a genetic screening with a fetus can allow for treatment of the unborn.” (Patra, 2015). This means that genetic engineering on human fetuses could potentially be a plausible solution for predictable disease in which would be out of our control otherwise. Also, according to Matt Ridley, a British journalist well known for his writings on science, argued that human genetic engineering would in fact increase the diversity in the human population because people are more likely to seek out traits that are of priority to their relevant talent. Not everyone will prioritize the same set of traits because people tend to favor different talents (Ridley, 36). This means that society would be populated with diversity in which people can be customized to their likings.

The second competing answer for the ethical question is that it is not permissible for computer programmers to help genetically modify human fetuses to surpass natural human capabilities. In this case, it would be much like the society in which we live in right now. Many of the natural human attributes and characteristics are left up to chance and it is up to nature to decide who is entitled to an advantage and who is unfortunate enough to bear a disadvantage. In an article presented by the US National Library of Medicine, National Institutes of Health, and the National Center for Biotechnology information stated, “Anticipating these issues, Savulescu developed what would be called “the Principle of Procreative Beneficence” by which parents would be morally obliged to discard an embryo with potential criminal genes and at the same time choose the embryos that have the most favorable genes for himself and for society.”(Ignacio, 2019). In addition, an article in the Embryo Project Encyclopedia argued, “Other bioethicists have argued that parents have a right to prenatal autonomy, which grants them the right to decide the fate of their children.” (Ly 2011). This means that the parents also have ability to strip away their child’s autonomy before the child is even born. This means that not allowing genetic modifications of fetuses would relieve a significant amount of moral obligations on parents who know and want to modify the genetic makeup of their child.

Even though both sides presented compelling arguments, my answer to the ethical question “Is it morally permissible for computer programmers to help genetically modify human fetuses to surpass natural human capabilities?” is a resounding. My answer was constructed after extensive research and analyzation of ACM code of ethics through the lens of consequentialism. According to Shafer-Landau, “Consequentialism says that an action is morally required just because it produces the overall results.” (Shafer-Landau, pg.119). To put simply, the decision to perform an action is based solely on the speculated outcome of said action. Although there is nothing intrinsically bad about genetically modifying a fetus, there will be significant negative societal impacts due to the result. In the ACM Code of Ethics and Professional Conduct, principle 1.2 states to avoid harm. By letting genetic modifications on fetuses be permissible, harm would be done onto society and indirectly negatively impact the lives of many. By consequentialism, this would not be a permissible action. Principle 3.1 of the code states that a computing professional should ensure that the public good is the central concern during all professional computing work. This means that the programmer should prioritize the public good when making decisions. Through the lens of consequentialism, genetic modification on fetuses may or may not benefit that individual but will net a greater negative impact on society. Thus, the action is not permissible as well. Principle 2.5 of the code states that a computing professional should give comprehensive and thorough evaluations of computer systems and their impacts, including analysis of possible risks. This means that the programmer needs to assess and weigh the benefits versus the negatives when genetically modifying fetuses as well as acknowledging possible risks said action could bring. This relates to consequentialism as the ethical theory also lends itself to evaluating the possible outcomes an action could bring.

A Social implication of my answer would be that it would prevent too much moral responsibilities befalling on society in regards to modification of human characteristics. As explained in Sandel’s The Case Against Perfection, “Responsibility expands to daunting proportions. We attribute less to chance and more to choice. Parents become responsible for choosing, or failing to choose, the right traits for their children.” (Sandel, 60). If genetic engineering on fetuses were permissible, then all individuals are subject to criticism that would not have been if otherwise. Some examples include a student losing a quiz bowl could be blamed for not being smart enough; a jockey losing a race for not being short or light enough, or an individual losing a beauty pageant because they weren’t attractive enough. These traits were originally out of people’s control, thus rarely being criticized for not having a desirable amount of those traits. The idea of this is it could potentially become a nightmare for many. Everyone could be potentially held accountable for all the characteristics that they have and or don’t have. The individual would literally have to be prepared in every possible way regarding his or her traits on top of other stress agents. These new responsibilities will be too daunting for many. In order to prevent this from happening, it would be in society’s interest to not let genetic modification of humans be permissible. The implication of making computer programmers helping to genetically modify fetuses morally not permissible would prevent this society burden. 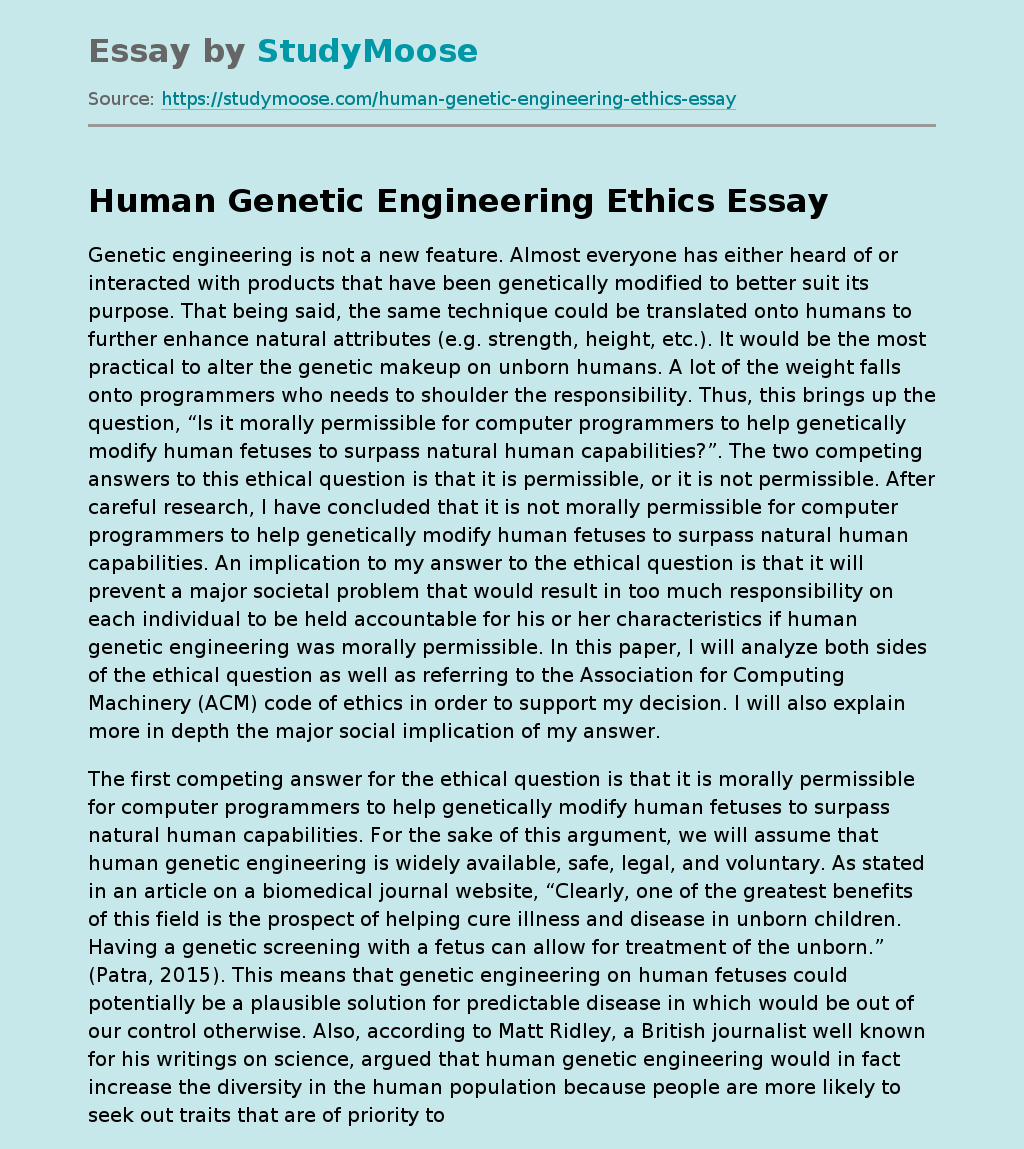