Human Connections in "The Great Gatsby"

The Great Gatsby serves as a pessimistic critique of the volatility and fickleness of the American Dream, as the audience bears witness the rise and fall of the very manifestation of the noble imperative: Jay Gatsby. His incorruptible dream is soon exposed to be founded upon greed and criminality, which is in and of itself representative of the American Dream; a pursuit of happiness which degenerated into a quest for mere wealth via any means necessary.

In accordance with this theme, the audience sees how the established relationships of the novel soon crumble due to the widespread corruption of material wealth and value.

Don't use plagiarized sources. Get your custom essay on
“ Human Connections in “The Great Gatsby” ”
Get custom paper
NEW! smart matching with writer

I believe that Fitzgerald intended to illustrate how the American Dream is a farce, and just like how it is foiled by the unrelenting corruption of money, so are the relationships in the novel broken due to the moral depravity that is introduced by the desire to attain and preserve wealth, comfort, and social rank. Gatsby, for all his affluence, barely had any true and personal connections to anybody.

An immediate proof of this claim can be found towards the end of the book in chapter 9, wherein we learn how poorly attended Gatsby’s funeral was. Only Nick, Gatsby’s father, Owl Eyes, and a few servants showed up. On pages 168-169, we learn how Nick invited Klipspringer to the funeral, only to be disgusted by the fact that Klipspringer wants nothing to do with the event, and was only interested because he wanted to retrieve a pair of shoes that he had left at Gatsby’s mansion.

Later on, Nick narrates how one of Gatsby’s bootleg workers who phoned the house had no idea that Gatsby had passed.

There is a general indifference to Gatsby’s death that permeates the last chapter, as both Daisy and Meyer Wolfsheim-the man who “raised him… right out of the gutter” (pg 171) -refuse to pay any respects to a character who had supposedly forged deep relations with both of them. There is even a description of a straggler who arrived at Gatsby’s mansion from his travels, unaware that his Gatsby’s parties ended a while ago. Gatsby’s striking loneliness is a direct result of his narrow-minded and unabashed pursuit of his ambitions, which manifests itself in the form of Daisy Buchanan. Gatbsy, for all the unsavoury means in which he tried to attain it, held firm to his imperishable belief in the Dream. Thus, he disillusioned himself with the notion that if he worked hard enough, Daisy would fall right back into his lap, and that they could move forward as if his 5-year hiatus from her life never occurred. One of Gatsby’s most memorable quotes is the one in which he claims that it is possible to repeat the past. He asserts that he is “going to fix everything just the way it was before” pg 110, and sternly believes that his lavish parties and effluent wealth will be enough to win Daisy back. His great ambition proved to be a double-edged sword, however, because it ended up distancing him from society as a large.

Gatbsy never bothered to interact with any of the people in his parties, and thus, was viewed as a very enigmatic and secretive man by the partygoers of West Egg.All the noblemen and women who attended his functions imply leeched off his prosperity then simply run back to their own affairs; none but Nick Carraway bothered to befriend Gatsby, and dig deeper than simply accepting that the “turbaned character” (pg 66) that was displayed to the public. What is even more tragic is that he failed to recapture Daisy in the long run; thus, all of his strenuous efforts (which limited him to focus on his one target) proved futile. Gatsby failed to realize is that Tom, Daisy, and many other members of the upper echelons in West Egg perpetuated a rigid class structure that excluded newcomers from its circles, which is a stark betrayal of the democratic principles of America and the notion of the American Dream. Daisy eventually leaves him for the comforts of her established lifestyle in the Buchanan household, proving that Gatbsy’s efforts to branding himself as a result of old money and the rooted riches of West Egg were all for nought. The fanciful notions that pure hard work and merit would reap all the rewards that one desired are shattered, as Gatsby’s grip on both Daisy and the rest of his establishment comes crashing down.

Throughout the novel, Nick failed to see the residents of West Egg for what they truly were; “careless people [who] smashed up things and creatures and then retreated back into their money or their vast carelessness or whatever it was that kept them together, and let other people clean up the mess they had made”. The relationships that Gatsby supposedly formed were all revealed as superfluous, and the people of West Egg as fickle moneygrubbers who wanted to preserve their aforementioned rigid class structure.

Human Connections in "The Great Gatsby". (2021, Mar 26). Retrieved from https://studymoose.com/human-connections-in-the-great-gatsby-essay 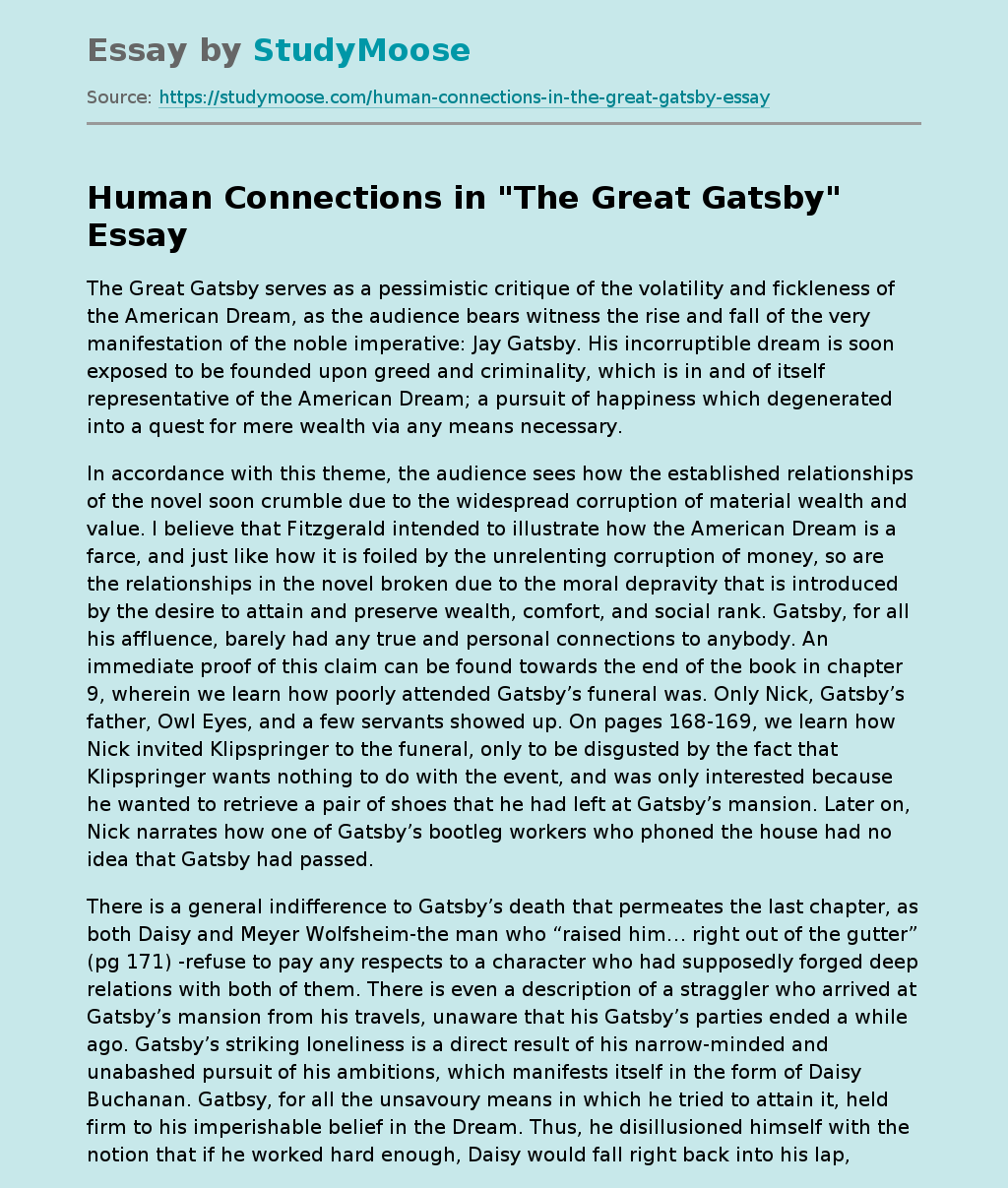