How Polar Bears are adapted to their Environment

The Polar Bear’s fur is extremely thick and it traps the heat so well, you can’t see one in inferred vision. This is good because the retention of heat keeps it permanently warm. It does not lose body heat as other animals and people do, and it would not be recognised by an inferred scanner, such as used when searching earthquakes and other devastated sites for survivors. The Polar bear would not be detected so this shows how well the bears fur keeps its body warm, especially in icy cold freezing temperatures.

Turn in your highest-quality paper
Get a qualified writer to help you with
“ How Polar Bears are adapted to their Environment ”
Get high-quality paper
NEW! AI matching with writers

Polar bears can go weeks between meals. Their digestive system, like true carnivores, is also more adapted for processing meat than plant material. Their large stomach capacity is designed to allow them to take advantage of unexpected large meals which will serve to tide them over during the slower months when food might be hard to find. This would keep them from starving until they can find more food.

However starvation is not a cause of death for the Polar Bear, as their ability to store body fat, enables them to go such long periods without food, that it would be almost impossible for the Polar Bear to go hungry!

The necks of Polar Bears are longer than their nearest kin, the brown bear. This adaptation makes it easier for them to keep their heads above water when swimming, and, like others, enables the Polar Bear to live in the somewhat harsh Artic environment!

The forepaws on a Polar Bear are very large.

With a diameter approaching 30 centimetres (12 inches) and partial webbing between their toes, Polar Bears are able to use their front feet much like paddles to propel them rapidly through the water. This helps them to catch their pray, as they can swim very fast so their pray doesn’t get away.

The hind feet are slightly smaller. On both the front and hind feet, the bottoms are covered with dense fur which affords better traction when moving on ice. This helps them to move quicker, whether they are running away from predators, or running towards their pray! On land though, they are not as quick as brown bears and appear to have traded off speed for their extremely massive forelegs which they use to break through seal dens or flip a large seal out of the water. They are able to attain speeds of 40 kilometres per hour (25 miles per hour) for short distances.

The carnassial teeth of Polar Bears have re-evolved changing back from a flatter crushing surface to a sharper-edged surface suitable for shearing off bite sized chunks of meat from their prey. Also, the canine teeth, used for seizing and holding prey, are longer, sharper and spaced wider apart than in brown bears.

The heavy fur the polar bears are covered with is varied from pure white to more of a yellow hue. The white fur is important camouflage for the bears as they hunt their prey out on the ice pack. The coat consists of two layers – an undercoat of fine white hair and outer coat composed of long guard hairs. The individual guard hairs are hollow. This gives the fur an actual translucent effect!! The hollow hairs also help to make the Polar Bear more buoyant when swimming.

The actual colour of the skin of the Polar Bear is black. It is thought that this is an adaptation for better heat retention.

The female polar bear has developed a unique survival technique when it comes to the development of an embryo. It is called delayed implantation. Delayed implantation clearly serves an important survival need for the mother. Should the female not have put on enough fat reserves before the time to den arrives, the embryo will not implant and it is simply reabsorbed by her body. She will then continue her winter hunting out on the pack ice.

How Polar Bears are adapted to their Environment. (2016, Jul 16). Retrieved from http://studymoose.com/how-polar-bears-are-adapted-to-their-environment-essay 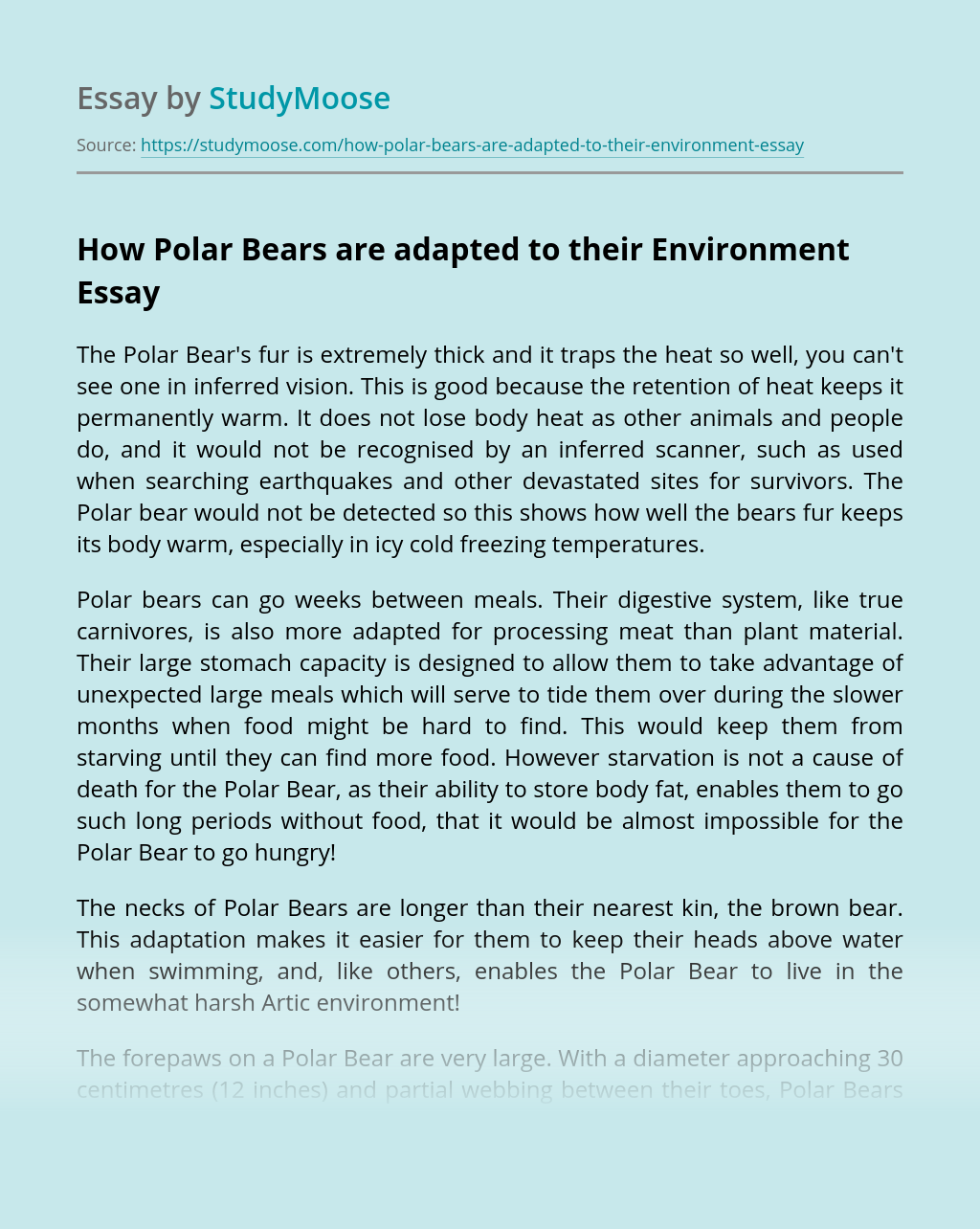 Turn in your highest-quality paper
Get a qualified writer to help you with
“ How Polar Bears are adapted to their Environment ”
Get high-quality paper
Helping students since 2015
Stay Safe, Stay Original