How my friend reacts to stress?

My friend Peter Johnson is a 35 years old African American male living alone in the province of St Peters. He has always been an independent iron-will man going after what he wants in life, as a result of his strong will he has managed to accomplish so many things. Today he is the owner of a very successful Air conditioning company. His ambition and determination has afforded him the opportunity of traveling extensively, owning a luxurious home, and having three vehicles, he enjoys the pleasures of life.

Don't use plagiarized sources. Get your custom essay on
“ How my friend reacts to stress? ”
Get custom paper
NEW! smart matching with writer

Peter has been divorced over three years now but is currently in a relationship with a 28 years old young lady. Ever since he was younger he has always dreamt of having his own family. He has been trying to get children of his own but has been unsuccessful in doing so. However, Peter decided to visit his doctor where he did multiple analyses and was sadden when he discovered that he is infertile. Peter was not coping very well with the news, his girlfriend suggested other ways such as adoption but he continuously insist on having his own.

Peter is experiencing denial, a form of defense mechanism use to cope with stressful situation. Peter refuses to accept that he is infertile. Furthermore, every time she brings up the topic of them trying other alternatives he shouts at her projecting his anger and frustration towards her.

According to Spielman (2017), a stressor is refers to any environmental demand that creates a state of tension or threat and require change or adaptation.

Recently Peter has been exhibiting symptoms of stress. Peter started drinking alcohol on weekends then continues to drink during the week as a result he sleeps long hours in the day. He no longer has interest in doing the things he once loved such as, playing football with friends, cooking, attending social events and fishing. Although peter loves his girlfriend he no longer has interest in spending time with her, he has become verbally abusive and it is causing his relationship to fall apart. Peter visits the baby story very frequently looking at the baby items and writing baby names while sitting at a children’s park weeping in desperation.

Although there are external stressors in Peter’s life he continues to make his situation worst. The news of being infertile is no doubt stressful to someone who dreamt of having their own children. Peter is presently suffering from self- impose stress as he continues to try to get pregnant and his frequent visitation to look at children’s clothing and toys. Peter’s actions shows that he has been stressing about a situation he cannot control. His actions are optional they do not have to be displayed, for the reason that they do not add to or enhance the situation, rather they distract from it. Peter has been compromising his health and relationship creating suffering for him by worrying and encouraging negative thinking.

Peter has been told by many individuals including his girlfriend that he needs to seek help. One of Peter’s friend suggested that he sees a hypnotherapist, which he was very reluctant in doing, but however, with the determination and support of his family and friend peter agreed to see a therapist. Hypnotherapy gave Peter the time to sit back and discuss his problem. Therefore allowing him to recognize what caused him to be stressed. He realized how ineffective his actions were and how they were having a negative impact on his health and family relationship. His therapist suggested many stress reduction strategies such as spending time with supportive friends and getting more involved in the things he enjoys doing like fishing and playing ball. Also the therapist recommended that he get journal and write down the thoughts that he finds difficult to express to others.

After a few sessions with his therapist peter began to cope much better when he becomes stress. He starts communicating with his girlfriend in more respectful manner. He overcame his fear of not being able to get his own child and as a result he addressed the situation with his girlfriend and is now willing to try adoption. Therapy has helped peter to make an adjustment of his life, he no longer drinks and party much but rather he spends more time with his girlfriend helping in house hold chores, attending social gathering with friends and focus on his company advancement. Peter also has learned how to value himself and build his self esteem. He has developed new techniques which he uses regularly to deal with stress. Peter is a much happier person today as his relationship between family and friends has improved tremendously.

How my friend reacts to stress?. (2019, Dec 18). Retrieved from https://studymoose.com/how-my-friend-reacts-to-stress-essay 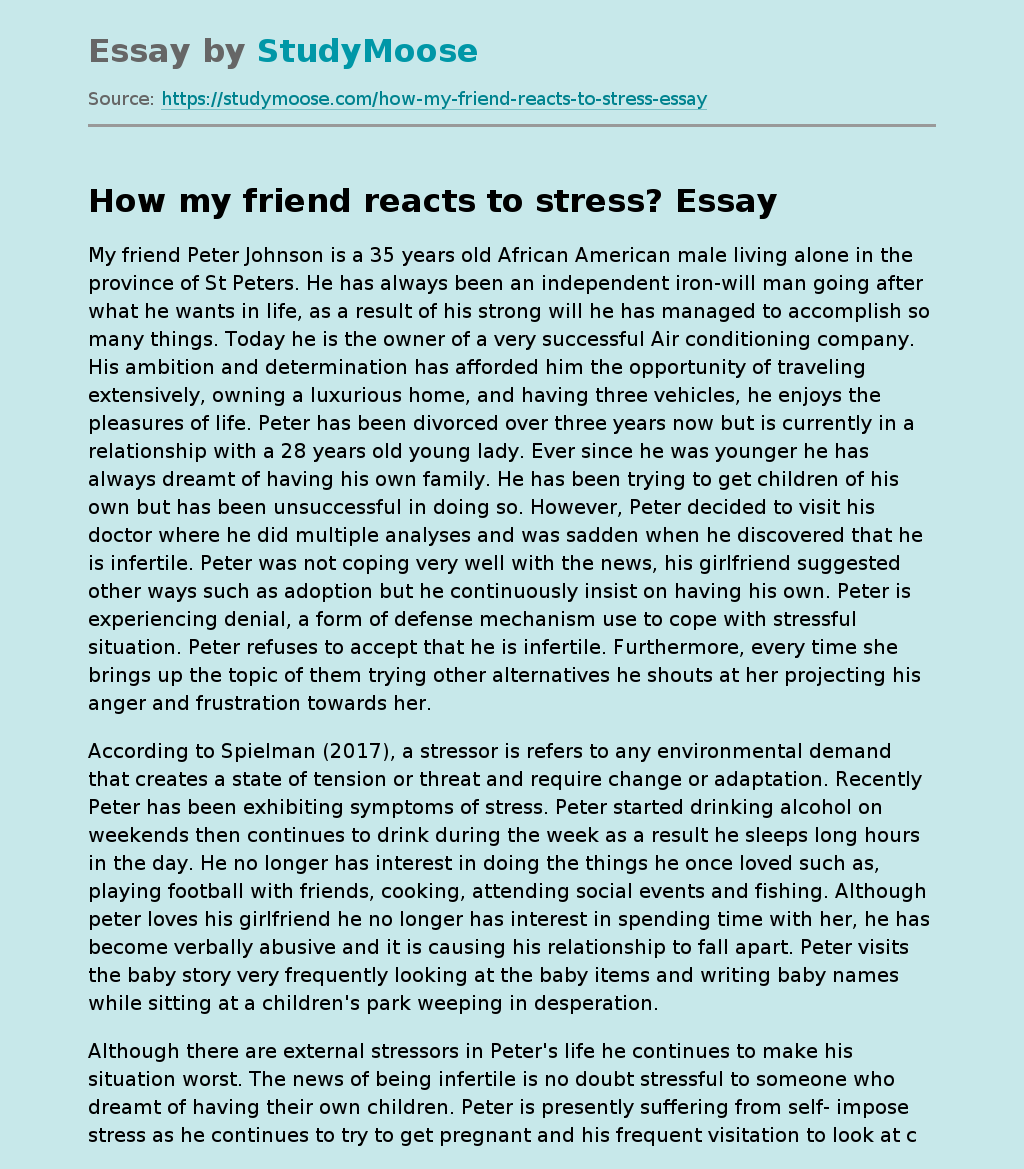