How children development is influenced by many factors?

Personal factors include the following:

Some children’s development may be affected by a pre-existing health condition. For example a baby’s development can be affected during the pregnancy, if a mother smokes, takes drugs, drinks alcohol or contracts certain infections such as rubella.

Don't use plagiarized sources. Get your custom essay on
“ How children development is influenced by many factors? ”
Get custom paper
NEW! smart matching with writer

Foetal Alcohol Syndrome occurs when a mother drinks large amounts of alcohol during her pregnancy. This condition will usually affect a child’s cognitive and physical development. The amount of alcohol consumed, as well as, when during the pregnancy it was drunk and whether it involved binge drinking or large amounts being drunk on a regular basis, will affect the level of disability caused. FAS can also cause delays in physical development as the child maybe underweight, problems with feeding and speech due to facial abnormalites and neurological problems such as alcohol withdrawal, problems with memory and communication and a low IQ.

A range of developmental areas can be affected by a health issue not just the physical development. For example:

•Their ability to make friends. A child who is repeatedly away from school may not be able to get to know the other children.

•Their education. Days maybe missed due to hospital or doctor’s appointments or long periods of time missed because of hospitilisation or just not feeling well enough to go to school.

•A lack of confidence and low self esteem. They may have to rely heavily on adults in some areas of their lives and have little or no sense of self-reliance. Many doctors are now encouraging children to be partially responsible to their condition, for example children with diabetes are often encouraged to inject themselves.

•Missed opportunities. Some children may not be able to take part in certain activities on offer. Running or playing outside may trigger their condition. There are other health issues that may affect development. This could be as simple as a bout of toncilitis resulting in a couple of weeks off school at an important point of the child’s education or a chronic health condition like diabetes that may mean missing lessons due to regular hospital appointments while the condition is being monitored.

Cerebal palsy is a neurological condition that affects the brain and nervous system. It is a general term that covers a range of conditions that affect a child’s morvement and co-ordination and is caused by damage to the brain before, during or just after the birth. Again the symptoms and severity vary greatly from child to child and also by the type of Cerebral palsy suffered for example spastic hemiplegia or ataxic cerebral palsy. Some children have the ability to walk but the age at which they can do this will be affected by either hypotonia (decreased) or hypertonia (increased muscle tone). Spina Bifida is another condition that is present from birth. Generally it does not affect a child’s cognitive development but, depending on the type a child has, may affect their physical development. In severe cases the child’s legs may be partially or even fully paralysed and there may also be urinary and bowel incontinence issues. The number of children born with spina bifida is now low, due to the recommendation that women take folic acid whilst trying for a baby and in the early stages of pregnancy. Spina Bifida may not only affect a child’s physical development. It may also affect the following areas:-

•Intellectual development as the child may have to have lots of time off of school.

•Emotional development as they may feel different to those children around them.

•Social development as they are not able to socialise with others.

A child’s cognitive development will be affected by learning difficulties, such as dyslexia, dyspraxia or ADHD, until it is picked up on. A Special Educational Needs Co-ordinator (Senco), which all schools have, will ensure that the extra educational support needed by the child is in place by working with the child and their parent/carers. The social and emotional development and wellbeing of a child with learning difficulties may also be affected if they are seen as ‘different’ by those around them and are teased and/or bullied and the effects of this type of treatment can cause issues well into adulthood.

As soon as a child is conceived their development begins. Their genetic information is made up from both the egg and the sperm. This information can sometimes be faulty and will affect the development of the health of the child. Down’s syndrome is an example of a genetic disorder. People with Down’s syndrome have an extra copy of the chromosome 21 in the cells of their body. There are some facial and other physical features that are common with this disorder as well as certain medical problems. For example atrioventricular septal defect (AVSD). This is a condition where there is a hole in the muscle that usually separates the different chambers in the heart. Typically speaking the rate at which most children with Down’s syndrome will develop will be affected because they have some degree of learning difficulty. However, the level of difficulty will vary from one person to another. Generally the usual speech and physical milestones will be reached but at a later stage than other children. External factors that may affect development include the following:

Poverty will probably have a major effect on development. Statistics show that children from poor backgrounds are less likely to flourish and achieve well at school. Parents will find it harder to deal with their children’s requirements which will have a bearing on all areas of development. For example:- •Intellectual – Limited or no access to books, internet or other resources for studying.

•Social – May not have the money to be able to take part in activities that their friends are.

•Physical – Poor diet or not being able to heat house in cold weather may cause health problems. Family background/environment

The adults who care for children have an influence on their development. Parents play an extremely important role in the lives of the their children. Although most parents do a good job at nurturing and providing for their children, there are a number of reasons why some parents are not able to do as good a job. Depression or an addiction to either drink or drugs are a few. Younger children may be neglected, whilst older children may have to take on a caring role within the family. A child’s development is also influenced by what they are born with and by the experiences that they have. For example a child that’s born with the potential to be a great long distance runner may not realise that potential unless they are given the opportunity to practise and the encouragement from adults to do it. A child’s cultural background can also have an effect on a number of their areas of development e.g. social – the primary language spoken at home may be different to the primary language at school. Most families suffer stresses at times, some may be temporary, some more permanent but all may have an effect on a child’s emotional and/or cognitive development and may result in a change in their behaviour or ability to learn.

Here are a few examples:

– •A change of employment.

•Redundancy or unemployment.
•Moving home whether locally or further afield.
•Changes in family structure eg parents seperating, divorcing or finding new partners. •The birth of a new baby.
•The death or illness of a family member.
•The disability of a family member.

There have been a lot of studies carried out on the relationship between the different types of child abuse/neglect and the affect on the different areas of development including physical, health, emotional and behavioural. The extent of the affect varies according to the seriousness, length of time and rate of recurrence of abuse/neglect but can continue to have an impact on the adult lives.

The effects of neglect/abuse on a child’s development may include:-

•Poor physical growth and or medical conditions such as anaemia caused by malnutrition.

Although some children in care have no developmental issues, many do. The lack of family stability and moving from one carer to another can have a negative affect on a child’s social, emotional and behaviour development and cause problems with their ability to form attachments or to deal with separations. Children may have been abused or neglected prior to entering care system. This may also affect their social, emotional and behaviour development but may also affect their speech and language development as they are too distressed to talk. They may also suffer with mental health issues that may lead to delays in their cognitive development as time off from school is required. Children in care may also meet similar issues to those with disabilities and learning difficulties.

How children development is influenced by many factors?. (2016, Mar 13). Retrieved from http://studymoose.com/how-children-development-is-influenced-by-many-factors-essay 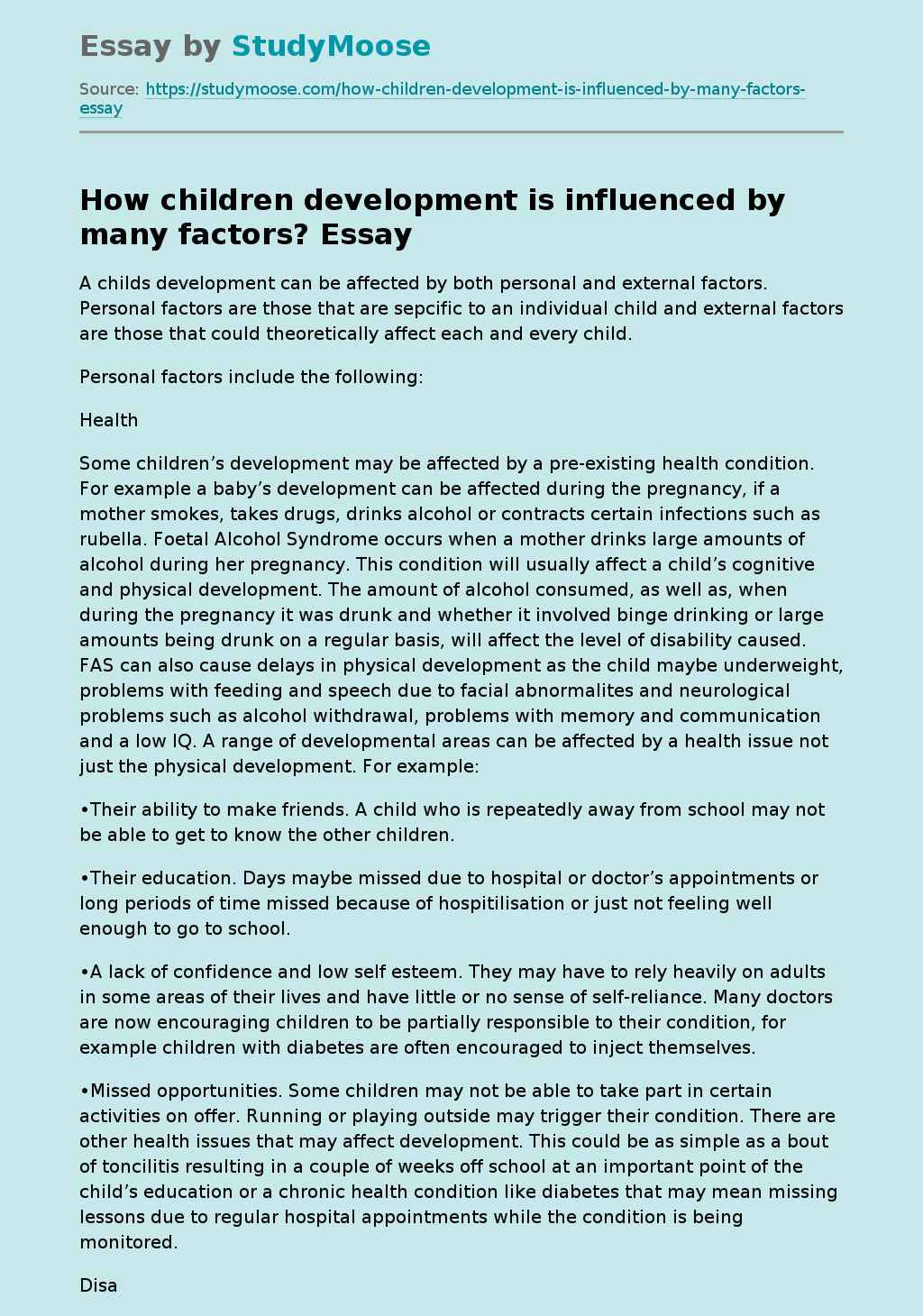