How far was New Labor influenced by Thatcher?

New Labour defines the second major ideological change within the Labour Party since the beginning of the twentieth century. Following the period of Bennite democratic socialists and the revisionist shift to towards the more moderate epoch of Old Labour came what Prime Minister Blair labelled ‘The Third Way. ’ Following Labour’s election into office in 1997 the newly elected government had a challenging task ahead.

Not only had Old Labour been defeated since 1979 which resulted in loss of faith in the party as a whole but Blair was also the first Labour Prime Minister to succeed the powerful British political figures, Thatcher.

Don't use plagiarized sources. Get your custom essay on
“ How far was New Labor influenced by Thatcher? ”
Get custom paper
NEW! smart matching with writer

Subsequently, the Britain that Blair inherited had been ‘imprinted’[1] by Thatcherism. Blair’s continuation of her presidential style of leadership meant that automatically it was possible to draw parallels between the two leaders. His emphasis on centralised governance, combined with the use of bilateral meetings instead of traditional Cabinet government methods mirrored that of Thatcher.

Although some may interpret this as a natural change in political culture, it could be more accurate to claim that Blair recognised the success that derived from such control over the executive and was also wary of repeating Major’s weak leadership mistakes, thus he chose to follow in Thatcher’s footsteps.

This is noted by Kampfner who refers to nickname that Blair was given during his time in office, ‘son of Thatcher. ’[2] This highlights media and public recognition of the two leader’s similarities.

However, more importantly, evidence of Thatcher’s influence over New Labour was not just evident in leadership style but also policy.

We can see the influence of Thatcher through Labours neo-liberalist approach predominantly in New Labours ‘economic and fiscal’[3] policies. Blair and Brown’s decision to grant independence to the Bank of England in 1997 differed from the position of previous Labour governments which tended to commit to Keynesianism and the belief that achieving high employment rates was the best way to ensure economic growth.

However New Labour’s U-turn was almost identical to Thatcher’s New Right approach, in that it mimicked Thatcher’s prioritisation of low inflation over employment. However, Blair strategically presented the economic shift as an inevitable progression due to globalisation. In distancing Labour from the economic failings of past Labour governments, New Labour aligned themselves with Thatcherism. And by emphasising the unavoidable nature of the change, Blair convinced the electorate, and especially his party, that the Thatcherite economic agenda had brought some benefits.

However, when assessing economic policies in more detail we can see that there were attempts to maintain a more traditional Labour approach. This is expressed by Jones who counteracts the break from the Bank of England with smaller examples such as the introduction of minimum wage and the ‘working person’s tax credit. ’[4] These social democratic elements meant that Labour were still focused on supporting the worker. Jones does provide a factual and impartial argument using evidence to support both sides of the debate regarding Tony Blair’s ideological stance. Making the source extremely valuable.

Nevertheless, despite these differences that existed in policy detail which is explored by Jones, the ideological stance of New Labour overall tended to reflect that of Thatcher and the Conservatives when evaluating the economy. This weakens Jones’ argument. A major justification for Labour’s evident continuation of neo-liberal economic policies was electoral expediency, for example, Anthony Downs’ theory of the median voter. [5] This refers to the idea that political competition is based around the need to gain support from voters in the middle of the spectrum.

However Downs also developed this point, claiming that parties who attain the opposition status for a period of time tend to ‘change their ideologies to resemble that of the party which defeated them,’ which would not only explain Labour’s move toward centre politics but also towards Conservatism. This theory is backed up by Grant and Fielding who both state that Blair was faced with the challenge of not only winning back the votes of the working-class but also ‘middle England. [6] Their viewpoints categorise Labour’s ideological shift as an attempt to re-appeal to the electorate as a result of the alterations within the British class system, explained by Grant as a means of ‘appeal to the [growing] middle class’ but also the ‘traditional working-class voters’[7] who increasingly disregarded socialist ideas. These views all lean towards the idea that New Labour was therefore, simply a strategic continuation of Thatcherism as a means of adapting to the modernised political and social changes affecting the electorate. New Labour’s social policy which saw a continuation of the previous Thatcherite government.

In fact, most theorists such as Grant and Jones argue that social democratic elements were less visible in social rather than economic policy. Committed to New Right ideology[8], Thatcher was set on shifting responsibility back to the individual. This contrasted significantly to Old Labour whose ‘freedom and fairness’[9] policies aimed to achieve equal opportunity. This emphasis on social justice was primarily achieved through the benefit system. Therefore, the obvious ideological difference between Old Labour and Thatcherism left Blair split between two possible directions.

Eventually a compromise of both left and right ideas was established. A major example of this new path was the ‘welfare to work’[10] policy (introduced in 1997) which aimed to provide work, education and training programmes for the unemployed by providing government funding to companies who were prepared to create jobs for the unemployed. Hay discusses the main programme implement to achieve this, the ‘New Deal,’ [11] which was based on a ‘sanctions regime’ for under twenty-fives that refused to take part in the programme.

Essentially this reflected the Thatcher’s Jobs Seeker Allowance programme as they both penalised those who refused to cooperate with the government. New Labours hard-line approach to welfare and individual responsibility was in response to the electorate’s growing disapproval towards benefit recipients which emerged under Thatcher. Alongside similarities in both Thatcherism and New Labours social policies that were implemented, there is also a resemblance in authoritarian approach adopted by both Thatcher and Blair which effected the social and penal spheres.

Under New Labour, there was considerable penal expansionism, this was evident through the erosion of citizen protection, increased imprisonment and an enhancement of police powers. Grant notes Blair’s focus on ‘electronic surveillance’[12] which contrasts to Thatcher who focused on achieving successful law and order through discipline. From this we can infer that both leaders aimed to maintain a strong and authoritarian state. However there is a clear difference in the way in which they tried to achieve this. The explanation for why such similarities in social policy existed is debatable.

Alongside Blair’s want to appeal to the swing voters, there is also evidence suggesting that the changes Thatcher made were irreversible. Therefore leaving Blair in a position in which he had to follow on from the Thatcher’s era as a means of preventing social disruption. This is argued by Hall who claims New Labour was a ‘post-Thatcherite’ political advancement which allowed labour to respond to and ‘adapt the Thatcherite, neo-liberal terrain’[13] whilst maintaining support from a working class. He goes on to persuasively classify New Labour as a ‘hybrid regime. Suggesting that in reality, Blair’s approach incorporated ideas from both sides of the political spectrum. Although, Halls argument is overshadowed by his forceful left-wing views, his point is reiterated by various other sources such as Jones and especially Grant, who describes New Labour as a ‘revised… right wing version of’ social democracy. Which echoes Halls emphasis on the political adaptation that Blair enforced in order to keep the Labour party relevant in the modernising world. This gives the argument more value as it is also argued by both neutral political writers and opinionated commentators.

Contrastingly, theorists such as Giddens provide us with a view that Labour did truly offer, as Blair claimed, a ‘Third Way’[14] and a break from both Thatcherism and Old Labour, arguing that New Labour was a new concept and renewal of social democracy. This is backed up by Tony Blair himself who referred to New Labour as ‘a modern social democratic party. ’[15] However, when evaluating these statements we must consider that both Blair[16] and Giddens[17] have strong political allegiances with the Labour Party and the promotion of ‘New Labour. This association shows that although the sources are accurate they are not necessarily balanced. Therefore, more convincingly, political writers such as Grant argue against Giddens view by stating that New Labour is marked by its combination of ‘elements’[18] of both old-style social democracy and neo-liberalism. Summarised by Hall as a ‘hybrid regime, composed of two strands’[19] one being neo-liberal and the other social democratic. This interpretation appears more accurate than Giddens as it accounts for the definite neo-liberal influence seen in New Labours policies, in particular their economic agenda.

When measuring how far Blair and New Labour were influenced by Thatcher, opinions vary. Many of the theorists such as Giddens attempt to fit New Labour in to a Thatcherite or Old Labour mould. However, the most persuasive approach to defining ‘New Labour’ are those who define it as neo-liberalism with a social democratic element. As summarised convincingly by Kampfner, Blair’s approached his time in power with the aim to continue but ‘soften’[20] Thatcher’s policies as a means of maintaining economic and electoral success whilst defining his own rule.

This is backed up by ‘hydra-headed’[21] interpretation offered by Smith, however, his negative connotations present Labour’s approach as contradictory and deceitful to its supporters when in reality it seems more justified to claim that they were simply an attempt to adapt and appeal to the changing electorate. More accurately by Hall’s view of labour as a ‘hybrid regime’[22] and by Gormley-Heenan who describes this style as ‘chameleonic leadership’[23] in that Blair altered the appearance of his party in order to adapt to the new times.

Although Gormley-Heenan’s theory is an assessment of political leadership during the Northern Ireland peace process, it is relevant when assessing Blair as it refers to inconstant leadership aimed to alter ‘according to… the climate in which it exists. ’[24] This view is reflected in most of the other sources, for example Hall who summarises that New Labour implemented a neo-liberal agenda to ‘suit its conditions of governance. ’[25] Furthermore, the idea of retreating from traditional and perhaps outdated ideology was supported by Blair himself in his famous declaration that ideology is dead and that ‘what matter is what works. [26] Overall, we can see that New Labour marked a definite move away from Old Labour and their tradition policies and instead took not only a more centralised position in the political spectrum but also a move towards Thatcherism. We can see Thatcher’s influence in both New Labour’s policy agenda and through Blair’s authoritarian leadership style. However, by not committing to a single ideological approach, New Labour were more flexible to determine policy in response to popular public opinion, rather than limiting themselves to a commitment to Thatcherism.

How far was New Labor influenced by Thatcher?. (2020, Jun 02). Retrieved from https://studymoose.com/far-new-labor-influenced-thatcher-new-essay 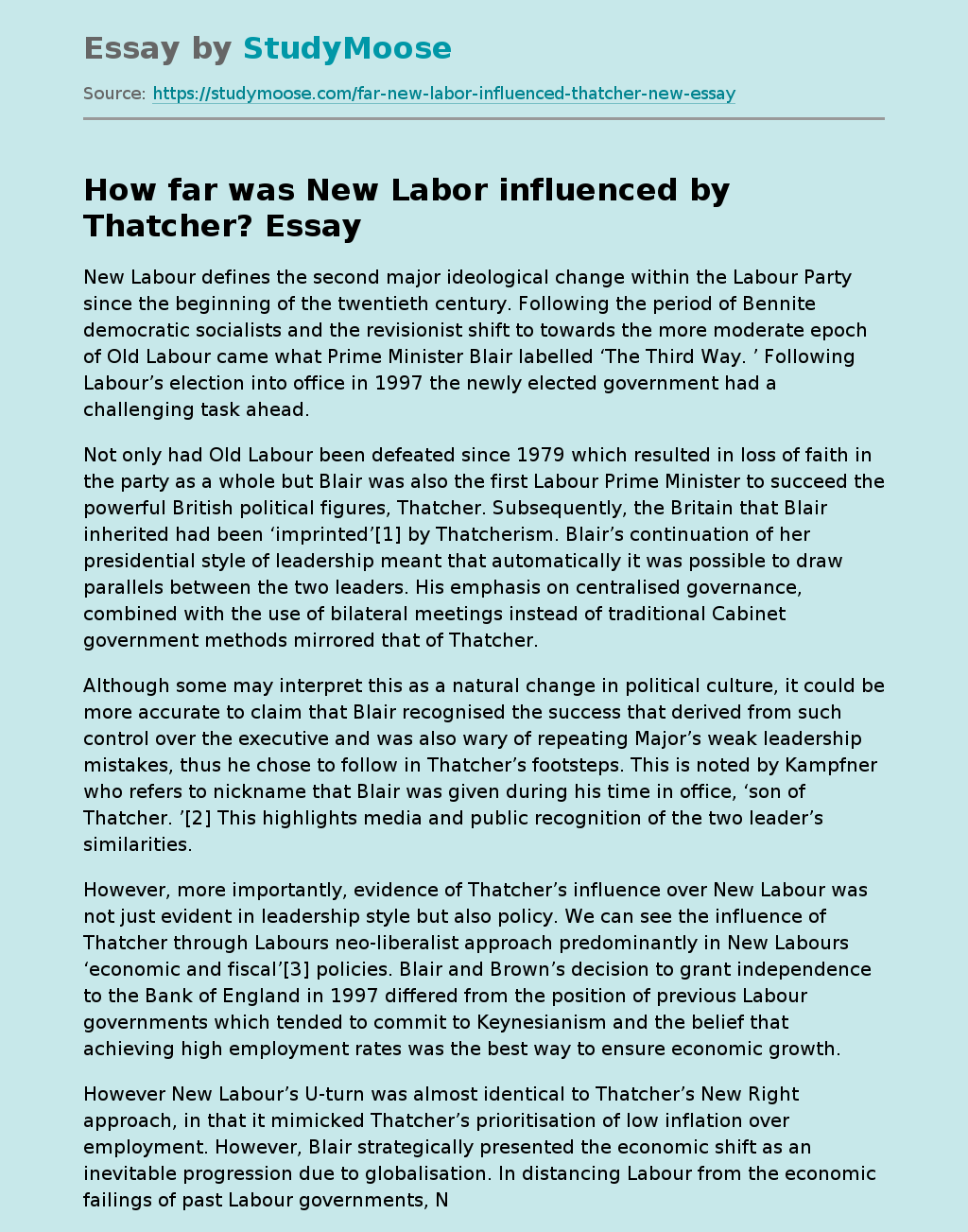