Red Bull: How The Macro Environment Has Influenced Its Marketing?

The aim of this assignment is to select an organisation and discuss how the macro environment has influenced its marketing decision making, for the at least 12 months, and how it is likely to influence its future decision making in the first part. In the second part this study will also need to use the same organisation and discuss how the marketing mix is used by the strategic to gain competitive advantage in its chosen sector against their major competitors. The main purpose of the Macro Environment Analysis is to identify potential threats and opportunities to chosen industry for organisations as an entire that are external the control of the chosen industry.

Don't use plagiarized sources. Get your custom essay on
“ Red Bull: How The Macro Environment Has Influenced Its Marketing? ”
Get custom paper
NEW! smart matching with writer

(WEB 1) This assignment critically evaluates some fundamental concepts which are start to the company introduction and then analyses strategic marketing plan for Red Bull and find out PEST analyses of the company. These include political, social, economical and technological factors. These researches also consider and discuss how the marketing mix is used by the strategic to gain competitive advantage in its chosen sector. We will find out to answer the questions “How the macro environment has influenced its marketing decision making?” and “How it is likely to influence its future decision making?” after the completing a macro environment analyses of the organisation.

Red Bull is one of the biggest soft drink successes over the past the years. The slim blue silver can has developed a following among those who claim that it helps them with virtually everything to work better and play better. Yet Red Bull has a 70 to 90 percent market share in over 100 countries universal. During the past 15 years, the drink has been copied by more than 100 rivals, but such companies as Anheuser-Busch and Coca-Cola have been unable to take market share away from Red Bull. [Selling Power (September, 2004)] In 1982, Dietrich Mateschitz, the founder of Red Bull became aware of products called “tonic drinks” which enjoyed extensive popularity in Asia.

Energy drinks containing taurine, glucuronolactone, caffeine and important vitamins and carbohydrates are claimed to help with physical endurance, improved reaction, speed and concentration and a feeling of well being. In the present days more than a billion cans of Red Bull are consumed each year around the world. Red Bull was launched in the UK in the mid-1990s of Austrian parentage. According to a Zenith International 2001 survey that, in 2001, it was the UK’s third biggest soft drink by value, behind Coca-Cola and Pepsi Cola. In the energy and sport drink sector, estimated to be worth £750mn, it had an 86 per cent brand share by 2000, more than double the combined sales of Lucozade’s energy and sports brands.

The advertising slogan of the Red Bull is “The Drink That Gives You Wings” and focuses on the stimulant properties of the drink. This is Red Bull’s international slogan for its energy drink. Red Bull is a popular drink amongst men in particular, with its largest consumers consisting of athletes, students, and night-clubbers in need of a late night lift. However, the brand is marketed to ‘opinion leaders and hard-working people with active lifestyles’, as the company’s website claims.

Lucozade Sport is producing a new sector that is in tune with changes in lifestyles and reflects the development of physical & sport activity. [Hawkes (1997), Johnson (2001), Newnham (2001)] Analysis of the external and internal environments of an organisation influence marketing decision making to choice and compare the marketing proposition that, The UK total cold drinks market is large and competitive area in which, many famous and influential brands with large marketing budgets competing for share. Therefore, the market can be an ever-evolving test for brands that wish to continue to grow in a category that is currently worth £3.55 billion. In the cold drinks market, increases in the soft drinks category have been slowing. However, growth has been driven considerably by the energy drink sector, which was worth an estimated £940 million in 2003 and more than £392 million in 2004 and still has grown 26% since 2003. (ACNielsen) The Energy drink category continues to grow at pace with brand extensions and new entrants to the market emerging every year.

This represents both a challenge and an opportunity for the category’s leading brands. [Mintel Energy & Stimulant drinks Market Report August 2006]. Red Bull is competing in the soft drink market and they are the driving forces in the rapidly increasing energy drink market. A close assessment of their websites reveals that they have a similar focus in their messages, so they seem to be competing for the same customers. However, the message delivery is very different. This would seem to indicate that they are not concentrating their strategic objectives on stealing market share or overall market share growth. Instead they recognise that the whole market share pie is rising. For that reason it seems logical that each company would be concentrating on bringing in a greater number of the consumers new to the energy drink market. 1.3 Red Bull’s Market Segmentation, Targeting and Positioning At this point, the concept of market segmentation, targeting and positioning are key to the success of firms marketing efforts. According to Kotler and Armstrong (2004, 2006) provide a useful definition: “Dividing a market into distinct groups with distinct needs, characteristics, or behaviour who might require separate products or marketing mixes”.

Segmentation is important because firms cannot appeal to all customers at once, especially not with the same offering. Rather, firms need to design products and services that fit with particular groups of individuals. Firms can segment their market in a number of ways, including geographical which is mainly people who are situated in the city, as they are likely to be really busy and tired. Red Bull seems to have a cooler in most bars and clubs in the city as well as in convenient stores.Demographic, mainly concentrate on men and women of all ages but focusing on people aged 16-29. Psychographic for example, the people who are tired or stressed and want to relax and have fun and finally behavioural segmentation especially students and young professionals to boost energy during work long day at work. The type of marketing strategy that should be employed will vary on the target market. Choosing an appropriate target-marketing strategy will depend on a number of factors.

Once a firm has selected the segment within which it wishes to compete, it must then choose a specific position within said segment where it will distinguish itself [Kotler and Keller, 2006]. The requirement of market positioning refers more broadly to the notion of competitive advantage. According to Porter (1985) firms should first identify the unique structure of their industry, in terms of the five forces model which are, the threat of new entrants, the bargaining power of suppliers and buyers, the threat of substitute products and the intensity of rivalry amongst competing firms that, influence levels of competition.

Therefore, Red Bull should then choose to compete on the basis of one of three generic strategic, whether that is overall cost leadership, differentiation or focus (Porter, 1980). Red Bull succeeds by remaining exactly the same. Consumers can choose with sugar or without. There is no other choice. As founder Dietrich Mateschitz says “We don’t bring the product to the people, we bring people to the product.” Red Bull marketing maintains a sense of product mystique that makes consumers feel special. Customers can relate to the experience they were having when they encountered the drink and they adjust their values to the attributes of the product.

Red Bull: How The Macro Environment Has Influenced Its Marketing?. (2016, Oct 25). Retrieved from http://studymoose.com/red-bull-how-the-macro-environment-has-influenced-its-marketing-essay 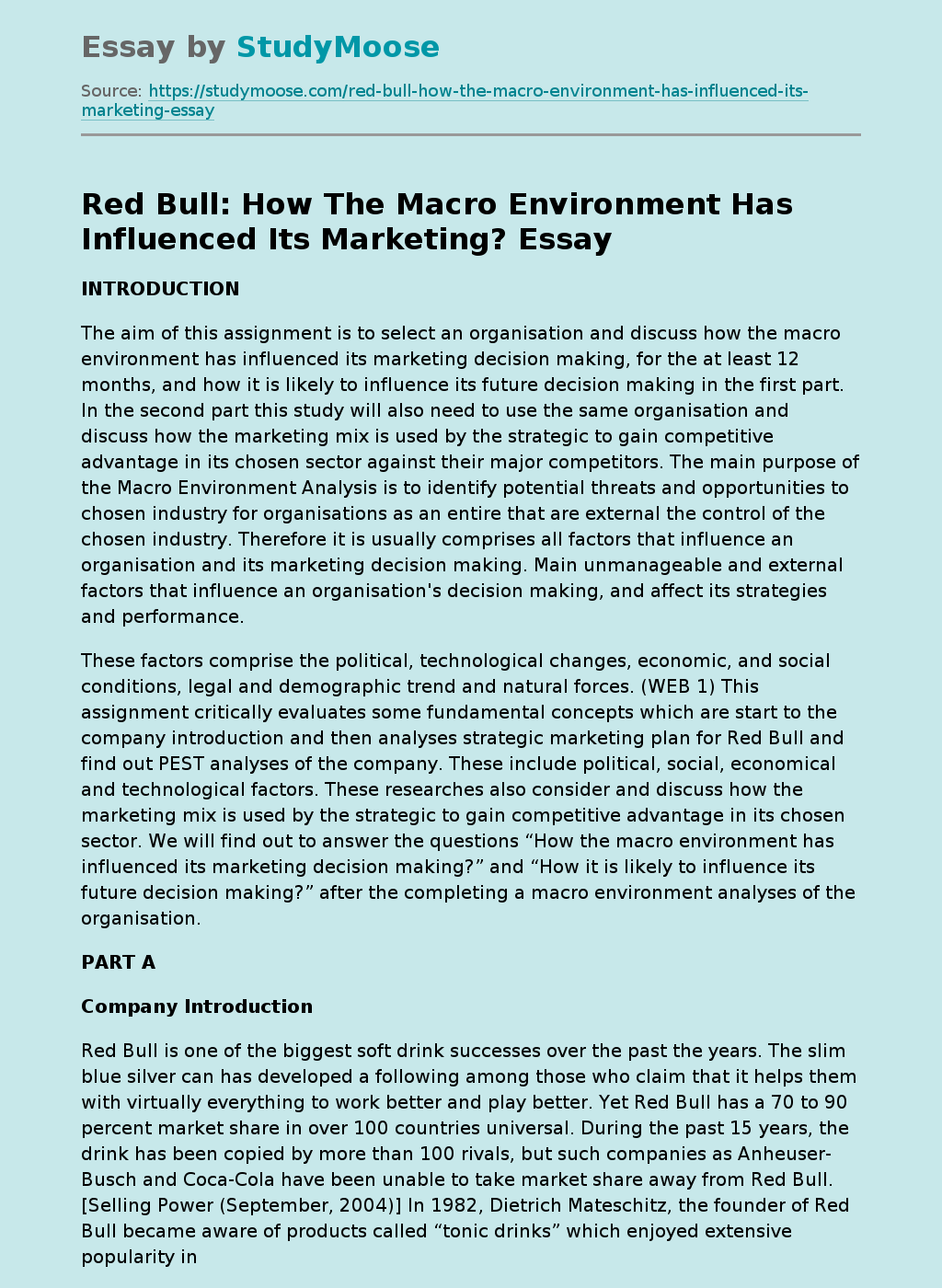